The High Sierra Trail Film by Chris Smead explores the history and wonder of the John Muir Trail's little brother in this festival circuit documentary. 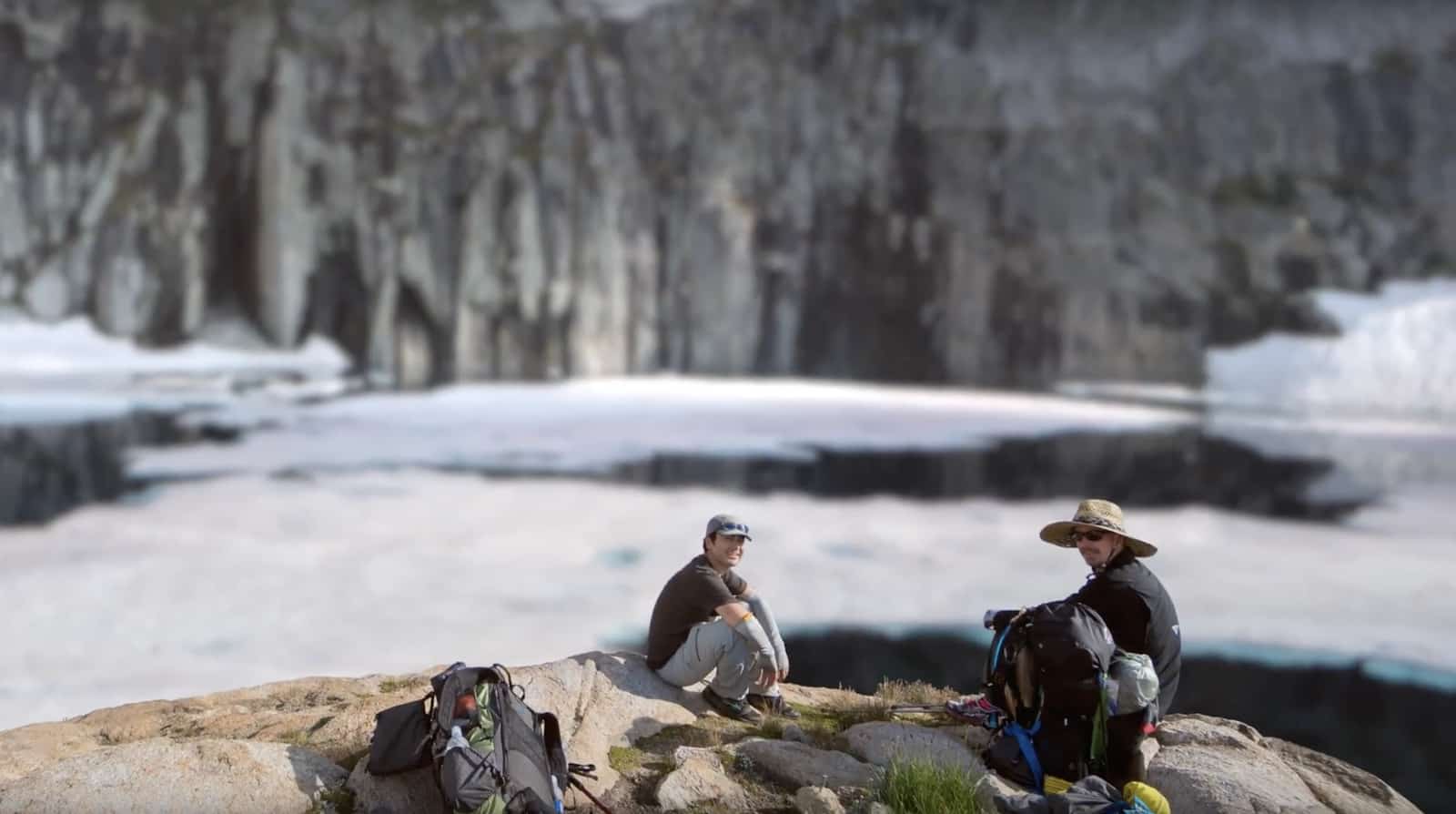 The High Sierra Trail (HST) begins in Crescent Meadow, at an elevation of 6,600 feet, on the western edge of the Sierra Nevada Mountains. From there, it spans 72.2 miles, ending at the peak of Mt. Whitney, the highest point in the continental United States at 14,505 feet.

Over the last several years, backpacking trails like the John Muir Trail (JMT) and the Pacific Crest Trail (PCT) have increased significantly in popularity, but few know about the trail many insiders refer to as the JMT’s little brother.

Most backpackers tackle the High Sierra Trail in 6 to 8 days and experience a total of 13,303 feet of elevation gain in the process. It is a strenuous hike and, as is true for all National Parks, dogs aren’t allowed. The best time to hit the trail is between July and September but, as anyone with experience hiking in the Sierra will tell you, the weather is always going to be the most significant variable.

Fortunately for those of us yet to experience the High Sierra Trail, Chris Smead, Director, Videographer, and Editor, and his friend John, frequent hiker and segment PCT backpacker, captured their experience over the course of six days on the trail.

They share their experience with us in The High Sierra Trail: A Documentary, which is narrated by William C. Tweed, a 30-year National Park Service veteran. The documentary premiered to a sold-out house on May 5th, 2018 at the Switchback Showcase in Campbell, CA and is currently being submitted for showings at more than 30 film festivals.

I was fortunate to receive a private showing of the film and briefly interview Chris, the film’s director. I’ll share more information on the film and where you can find it, my review of the film, as well as excerpts from that interview. But first, I’d like to share a brief history of the HST. 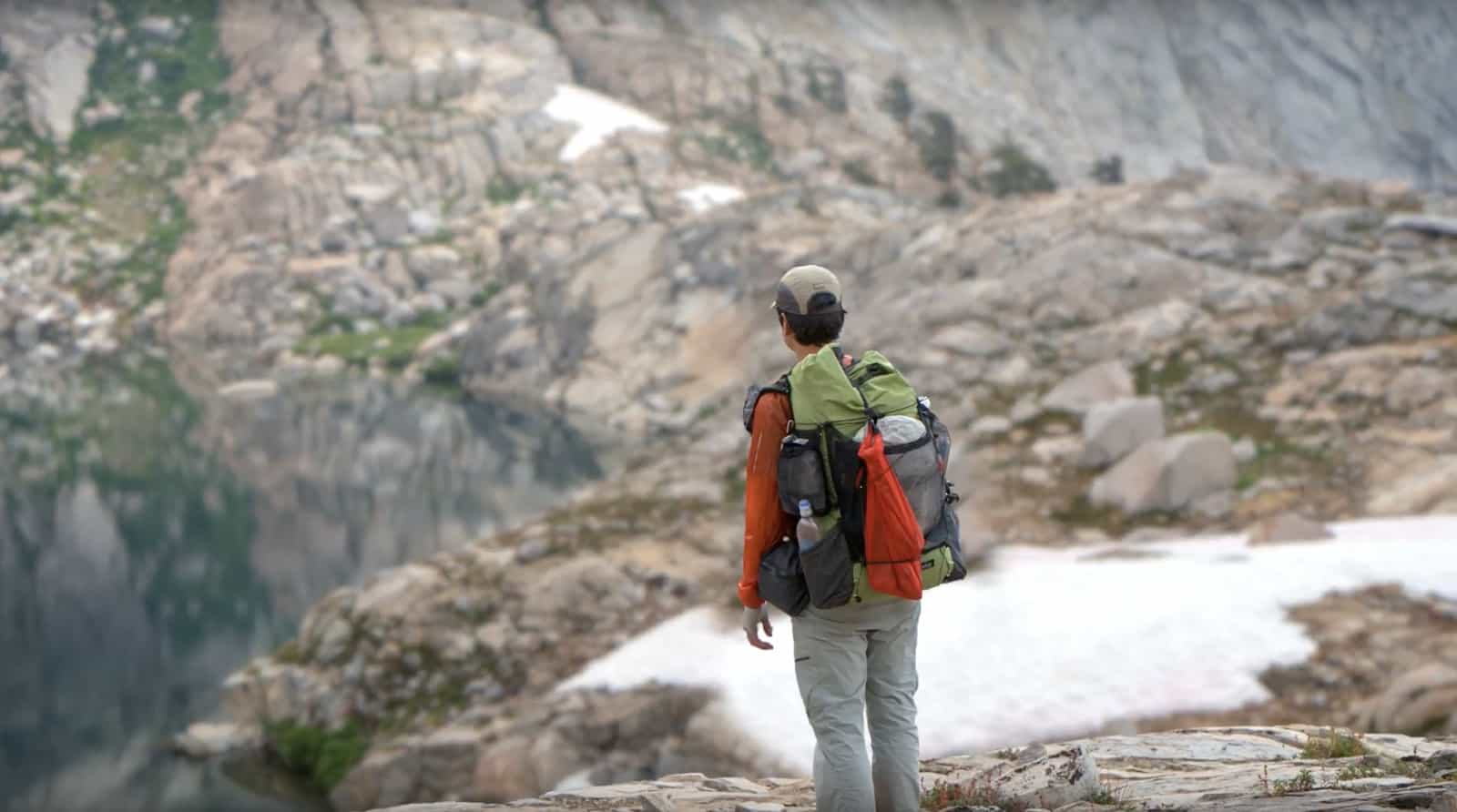 History of the High Sierra Trail

In 1926, Sequoia National Park was expanded from just the western section, which had become famous for the giant Sequoia Grove, to include much of the Eastern Sierra and Mt. Whitney.

According to narrator William C. Tweed, the HST is a reflection of the vision of a man named John Roberts White. White was the Superintendent of the Park Service at that moment in 1926 when Sequoia National Park was tripled in size. His motivation was to tie the old park to the new park without building another road.

White envisioned a trail where no trail had passed before. At that time in history, there was no easy route from the giant Sequoias of the original park, over the Great Western Divide, and up to the crowning jewel of the park’s expansion, Mt. Whitney. 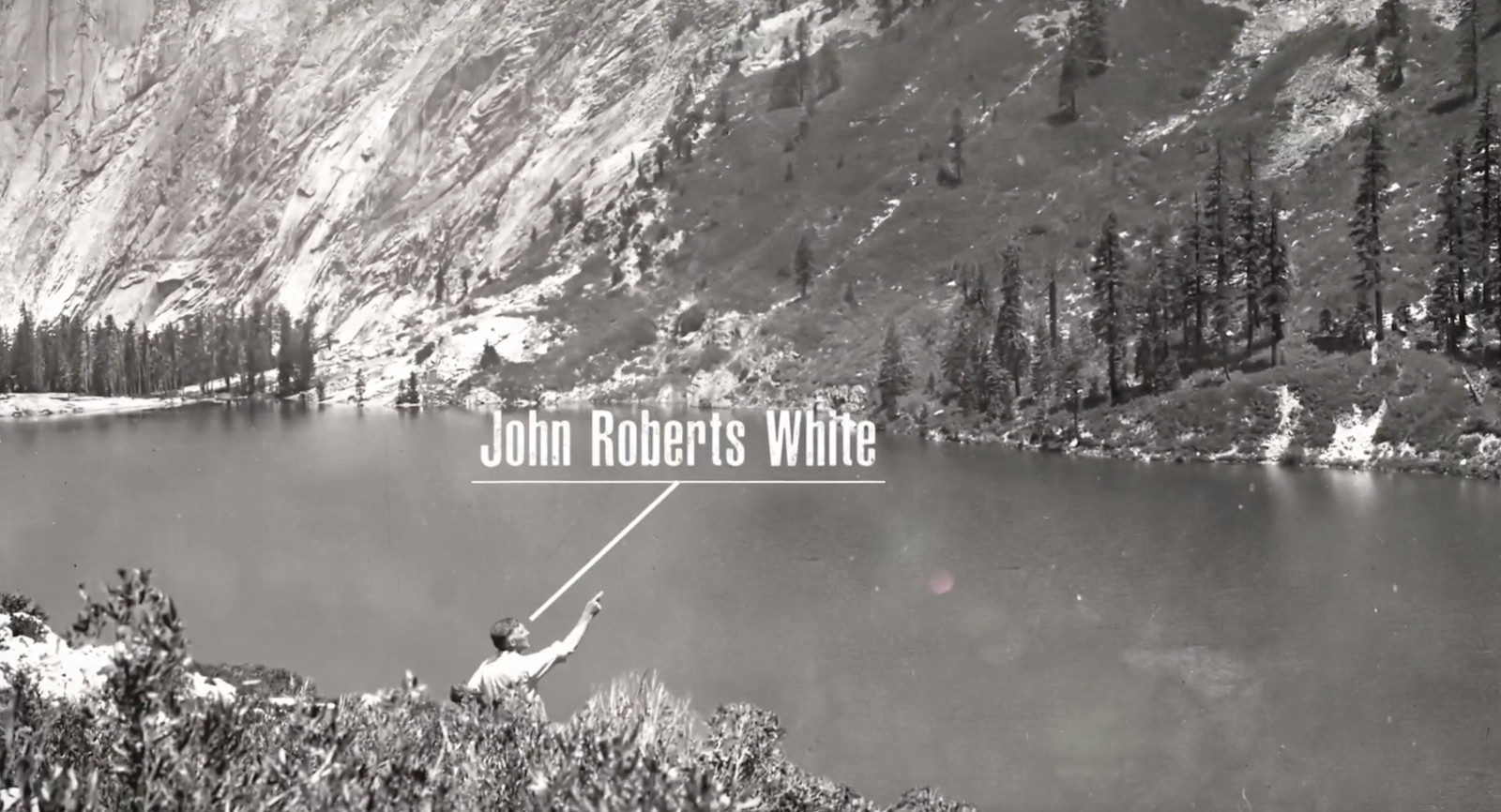 Because the surveyors and engineers on the trail project were still unsure of the exact route the trail would take over the Sierra, the trail that was constructed over the course of the first two summers was finished at a grade that was slightly above perfectly flat.

Some of the most notable historical features of the High Sierra Trail include Precipice Lake, the site of Ansel Adam’s famous 1932 photo Frozen Lake and Cliffs, the historic townsite of the utopian-minded Kaweah Colony (which was incorporated in to SNP in 1890), and the Smithsonian-built Mt. Whitney Hut for astronomical research, which has been there for over 100 years!

There are many challenges to filming a documentary on a remote trail in the Sierra wilderness. Fortunately, Chris had previously logged more than 60 treks throughout various parts of the Sierra before undertaking this project. He hiked the John Muir Trail back in 2016 and has also been on multiple backpacking trips in Alaska and Colorado.

According to Chris, however, his experience on the John Muir Trail “set the tone” for his passion of capturing the beauty we can experience through ultralight travel and sharing it with the world. “I’m not some pro film dude,” Chris said. “I’m a backpacking geek who started these little film projects.” 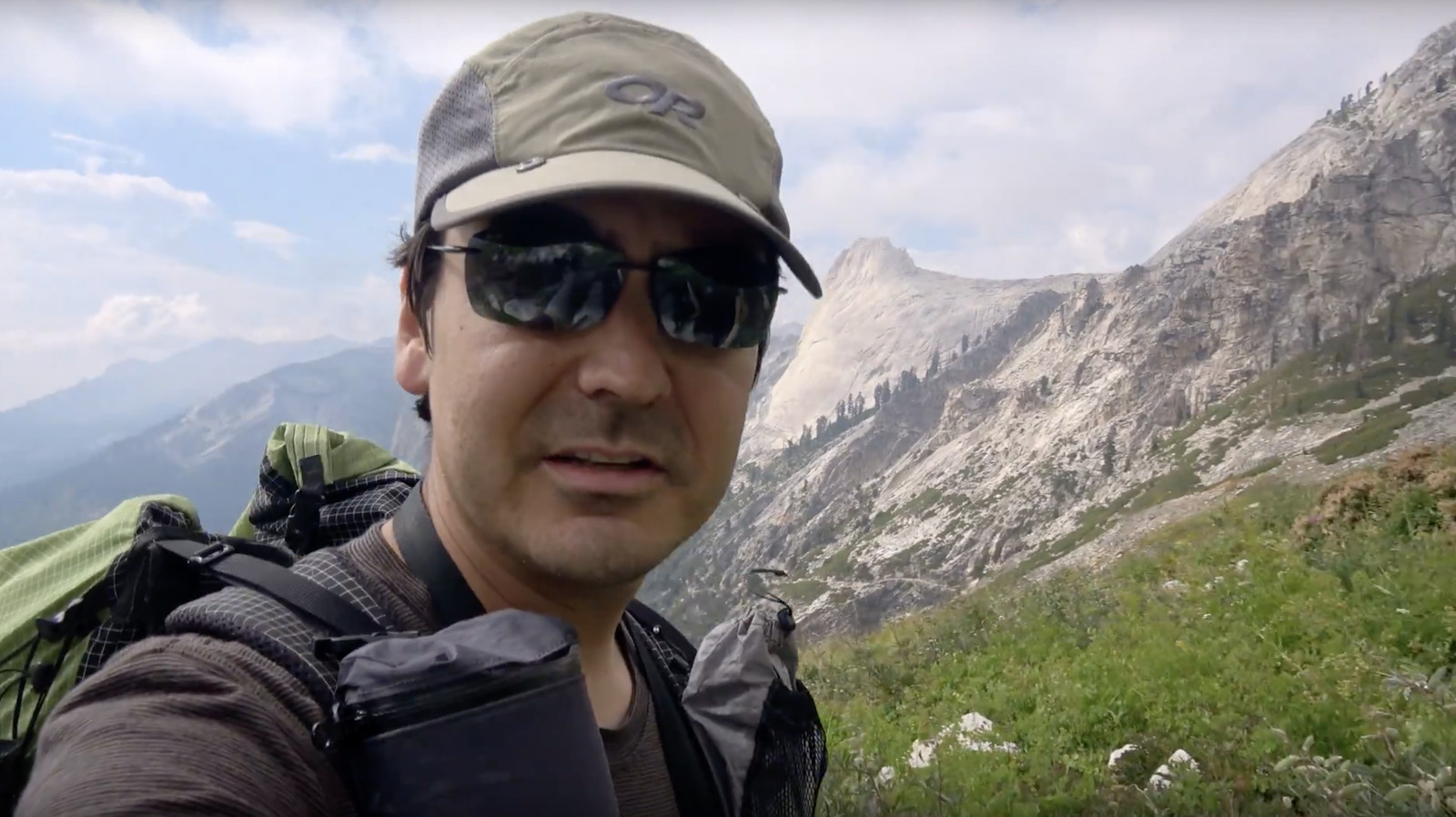 This particular project involved nearly a year’s worth of logistics prior to Chris and John even hitting the trail. Although Chris admitted that getting backcountry permits for the High Sierra Trail was much easier than for the highly-coveted John Muir Trail, the fact that he planned to film and produce a documentary meant he had to prove to the National Park Service that your film will act in their interest.

The Wilderness Act of 1964 prohibits a “commercial enterprise” in federally-designated Wilderness, including videography and photography that will eventually be used for any commercial purpose. As a result, Chris had to spend more than a month stating his case to the Park Service to obtain a permit to film along the High Sierra Trail.

For the Park Service, “it’s personal,” Chris said. Another individual with a camera on the trail can end up encouraging more people to go, which comes with additional concerns from the perspective of the folks tasked with responsible management of these lands. “One of the biggest threats to that land is people,” said Chris.

Eventually, Chris was able to obtain permission to film and he and John hit the trail on September 4th. Their packs weighed about 35 pounds, about 14 of which was camera gear alone. Their camera gear included a Sony SLR2 with four different lenses, a Sony Handycam, and a gimbal stabilizer. Their audio kit included a portable recorder, a shotgun mic with big fuzzy to reduce wind noise for the SLR2, and a smaller shotgun mic on the Handycam for “run and gun” purposes. 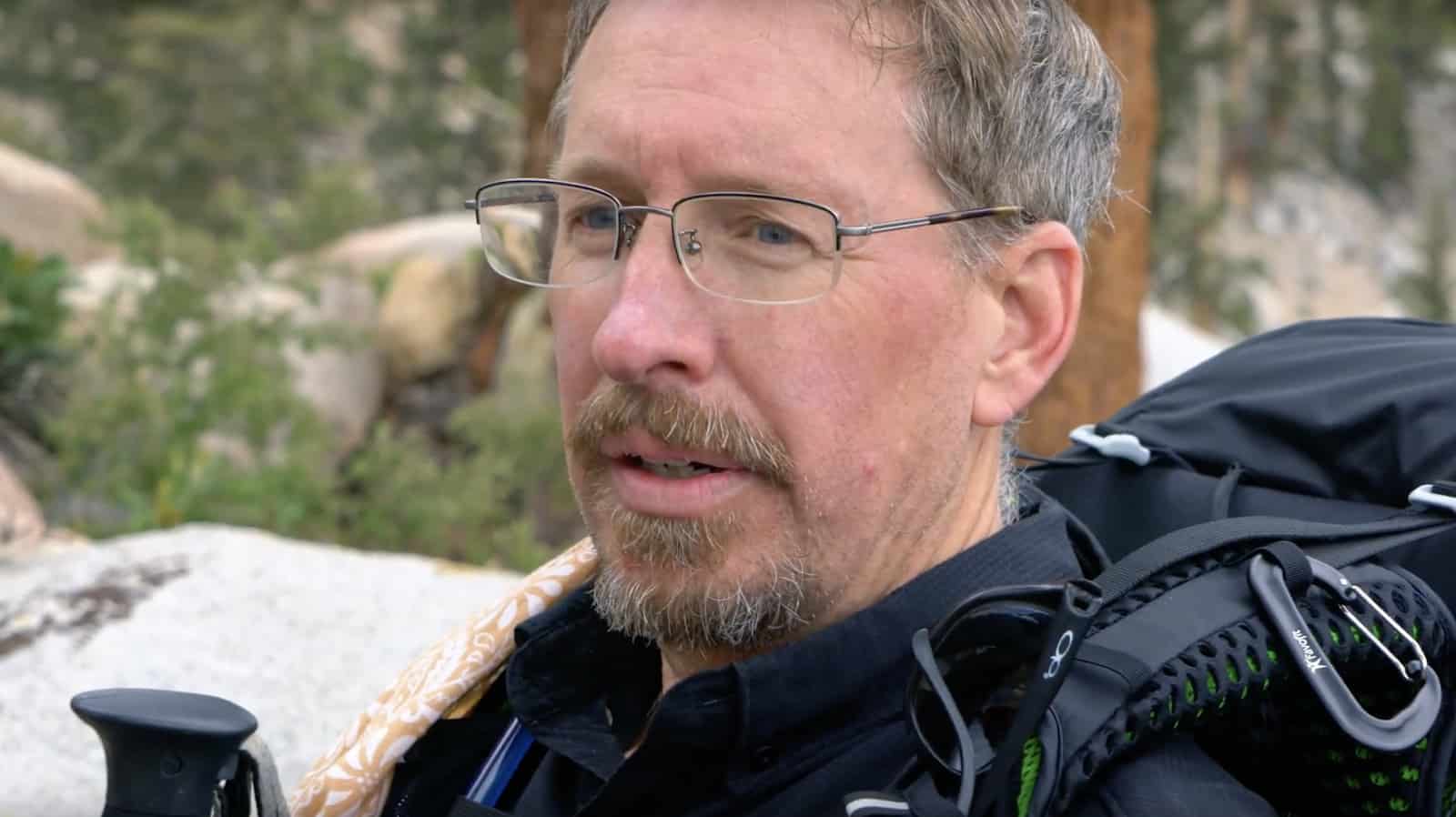 Chris said the biggest challenge of bringing everything you’d need to film for six days is power. Many multi-day hikers utilize solar panels to keep phones and smaller cameras charged throughout their trips (not an option for Chris, as he was burning through three or four batteries per day). In the end, he wound up calculating how much battery power he’d need for the entire trip and carrying a massive bag of batteries to last throughout.

One of Chris’ more significant challenges in the post-production process involved the footage he captured using the gimbal stabilizer. When I interviewed him, Chris admitted he had never used this particular model of gimbal before. As a result, many of his shots wound up too bouncy to use, which resulted in a more extensive editing process and a lot of the nifty animations the audience will see throughout the film.

For aspiring nature videographers out there, Chris was adamant about passing along the lesson that you should always know your gear before you go. But with that said, Chris was also astounded by the post-production assistance he’s received from others who are interested in backcountry travel.

The audio crew for this film includes respected names like Bill Meadows and Alex Knickerbocker, whose previous work includes Mr. Robot and Fast and Furious. Soon after the release of his first trailer, Bruce Goodman, a professional colorist who has worked several Hollywood Films and who is responsible for the coloring in the popular JMT film Mile, Mile and a Half, also approached Chris.

For his part, Chris seemed sincerely humbled by the support and passion of these Hollywood names wanting to help with his project. As he said in our interview, “previously, and still, my projects are selfish. I like the outdoors, and I like doing them.” But recently, Chris feels that his projects (he recently started a new arts collective called Outmersive Films) are beginning to take a direction and that his passion for the outdoors and capturing them can maybe, one day, serve a higher purpose.

“Our goal is to get people to go outside,” Chris said towards the end of our interview. He pointed out that there’s already a well-established infrastructure in place to protect public lands, but that the places that are at risk of losing federal protection are the “peripheral places where nobody goes.”

The problem, according to Chris and I’d say I’d have to agree, is, “why aren’t people going to these places?” He admits that the goal of this film is simple. It’s just to “encourage people to get outside.”

My Thoughts on the Film

Chris’s film brought back some fond memories for me as a backpacker who cut my teeth in the Sierra. I was fortunate to backpack the entirety of the John Muir Trail back in 2014. Being from the Sierra, I was shocked that I had never heard of the High Sierra Trail before seeing this film.

Many of the shots and animations in this film are astounding. Capturing the majesty of the Sierra is no easy feat, but Chris’s work on this film will show you the magnitude of the peaks in this region, the crystal clarity of the park’s lakes and rivers, and the deep-green density of the Sierra pine forests. 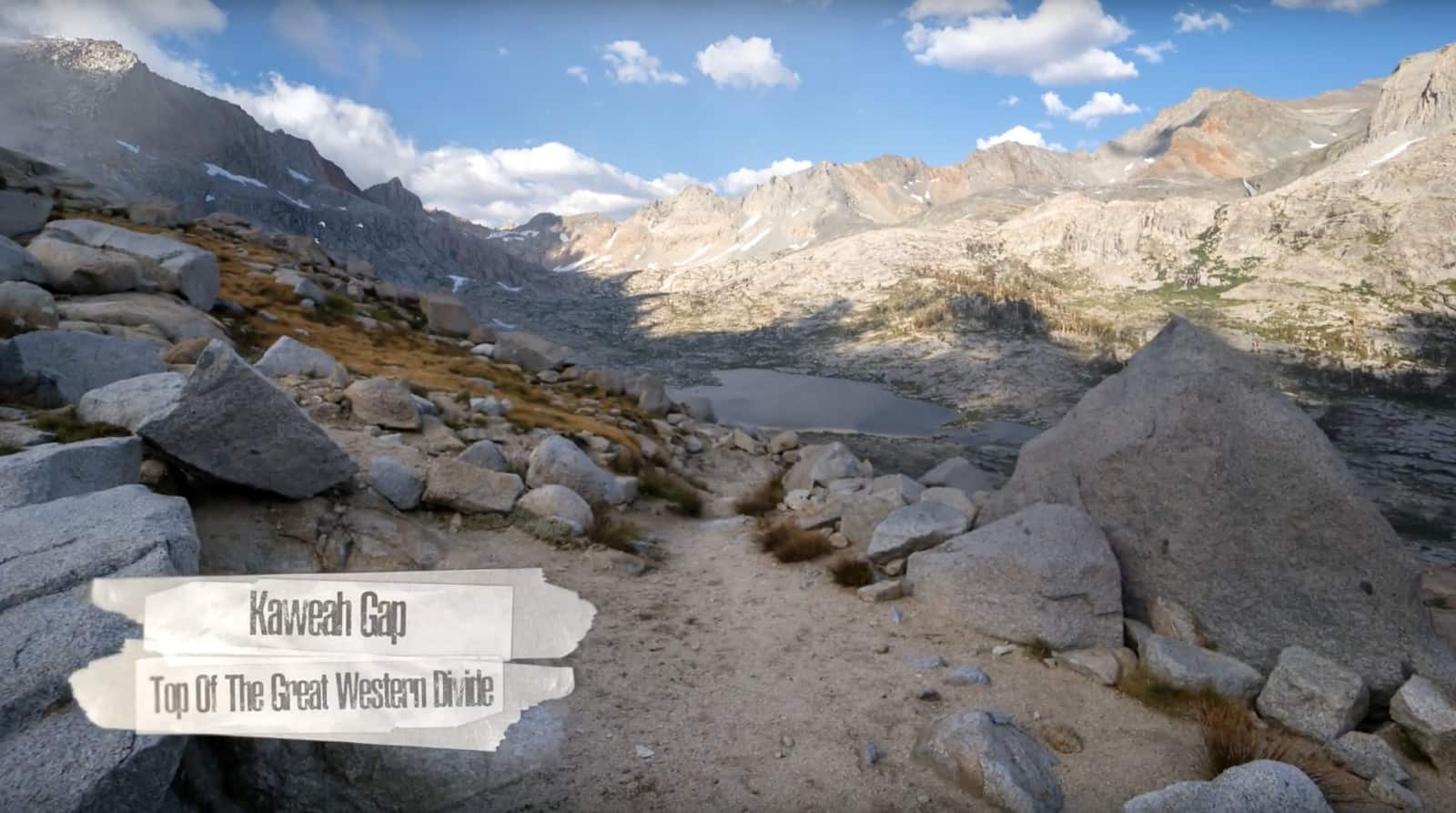 In my interview, I asked Chris about the biggest lessons he took away from this experience on the HST. He told me that he never fully appreciated how much learning the history of a trail before hiking it adds to the experience until he met Mr. Tweed and dove into the history of the HST.

This thought resonated with me because I’m a firm believer in the importance of understanding the vision and hard work that went into creating anything that we, the public, have the privilege of enjoying today.

The High Sierra Trail: A Documentary is an inspiring film that highlights the beauty of Sequoia National Park and showcases the effort required to complete a trail over the Great Western Divide.

Perhaps my favorite aspect of this film was the fact that the director clearly understands the importance of Leave No Trace backpacking and responsible management of our nation’s wild places. The National Park Service takes this latter responsibility very seriously, and we should be grateful for the work they do. After all, humans continue to be the greatest threat to the erosion and degradation of these magnificent natural areas. 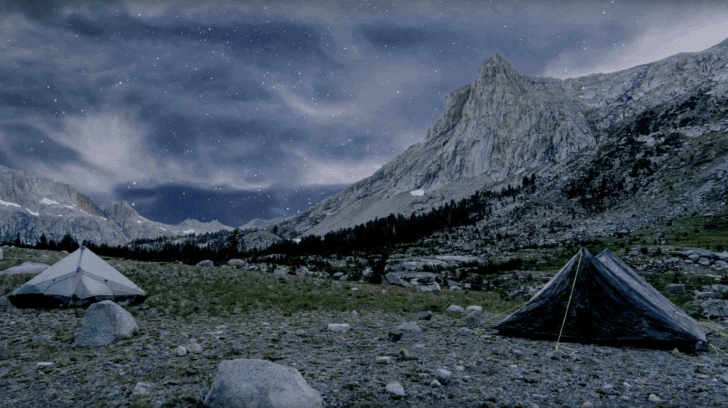 Where to Watch the Movie

So, you’re interested? As I mentioned in the introduction to this article, the documentary has already been submitted to a number of film festivals. According to Chris, they are also working on setting up distribution of the film through iTunes. It will not be available on YouTube like some of Chris’s earlier projects.

The best places for you to stay up-to-date on recent developments with the distribution of the film and where you can see it are the film’s website, High Sierra Trail. Once there, be sure to enter your email address to receive updates on where you can see the movie. You can also follow Outmersive Films on Facebook for the latest news and information!

And of course, here’s the trailer: 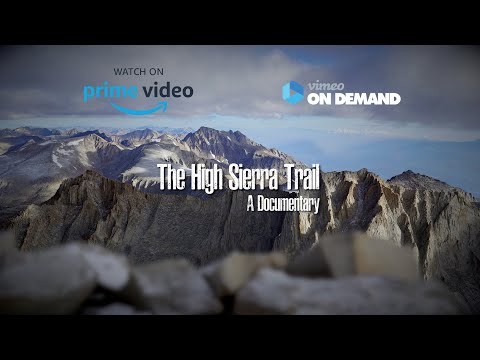