On Heatsinks and Thermal Balance 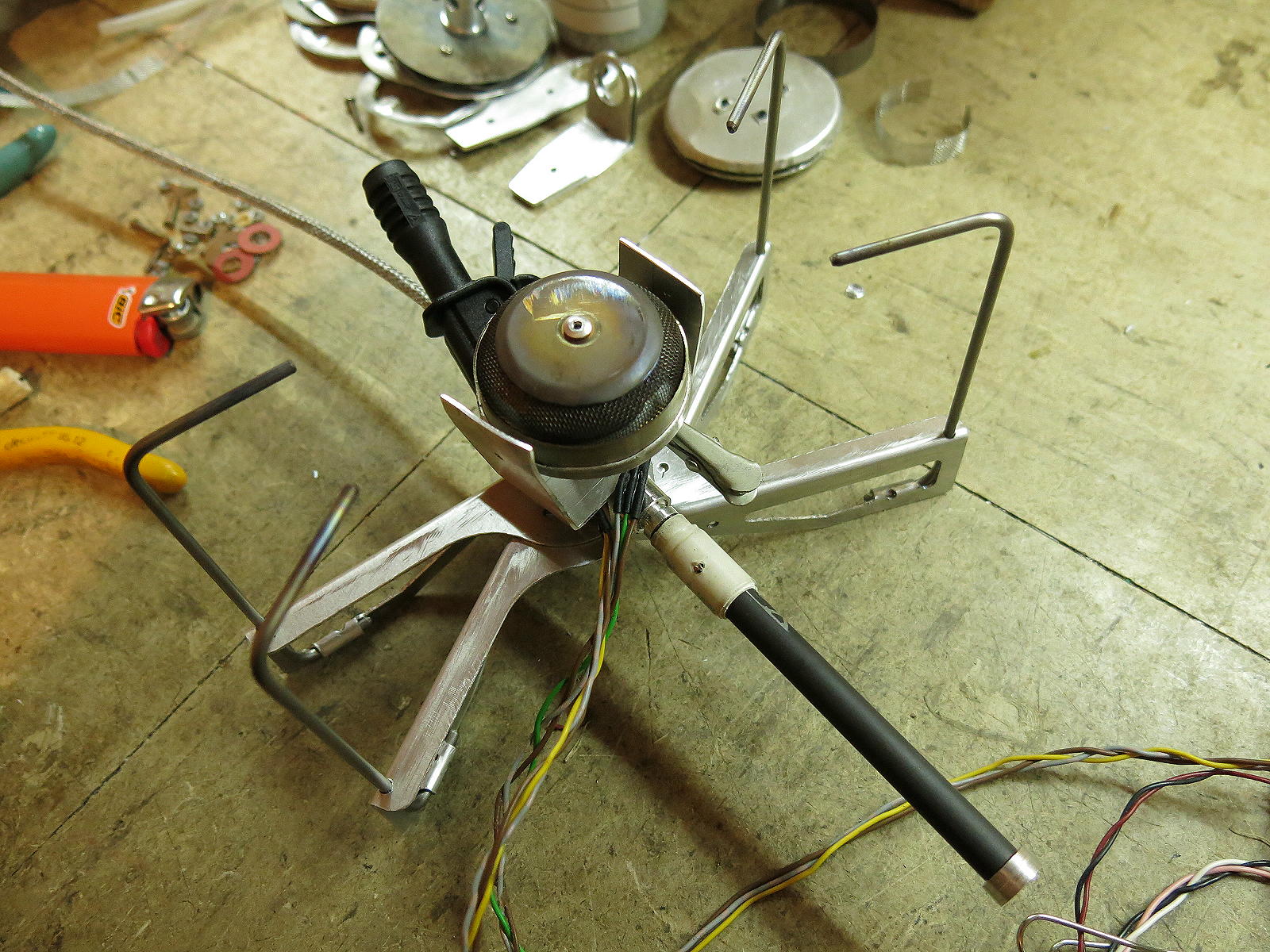 On all my inverted canister winter stoves I have managed to avoid running a vaporizing tube over the flame. While such a thing is necessary for white gas stoves and essential for kerosene stoves, my theory was that there was enough heat around that the liquid propane/butane mix coming from a canister could look after itself with just a little feedback from the flames.

Mind you, in the cases of V1 and V2 temperatures of the heat shunt (HS), stove body (body), and water for low/medium power they were vortex burners and my main job was to prevent the stove body from getting far too hot. The feedback from the flame vortex inside the burner was intense. In the cases of V1 and V4, I ran a heat shunt, a strip of aluminum, from the flames back to the fuel inlet.

The idea is that the flame would heat the end of the heat shunt, heat (or energy) would flow down the strip of metal to where it joined the stove body near the fuel inlet. There the energy would be absorbed by the incoming liquid fuel which would vaporize, go up and out the burner head, to make the flame.

By and large, this idea works fine. However, a recent customer for the V4 (Ian) reported some problems. He would prime his stove so everything was hot, then invert the canister for a liquid feed, and run it for a while. Then sometimes, after a while, the stove would start to hiccup and flare, and the stove body was found to be cold. What was going wrong?

I suggested various things by email, but none of them worked well enough. This was not good. A more detailed investigation was required. Fortunately, Ian was technically minded and was able to play with his stove a bit. Between us, we worked out what was going wrong and how to fix it. This is the story.

Details of the Problem

The problem did not happen under what I would call normal use. The stove had to be turned up to full power before the problem started. I do not run any stove that hard, and I recommend you don’t either, as it is rather inefficient in fuel usage. Full power normally means the flames are visible beyond the edge of the pot and a lot of heat is lost/wasted up the side of the pot. You can see this below and that was not really full power.

Now when the incoming fuel vaporizes, it uses up a fair bit of energy to go from liquid to vapor. Very often this energy comes from the canister or the fuel in the canister. This is why you may find that a canister will develop frost on the surface and stop giving off gas: it has lost so much energy that it has ceased boiling off vapor. (The use of the word boiling here is deliberate and correct.) In fact, this is why we use an inverted canister stove in winter, to prevent the canister from freezing up. Instead, the energy for boiling is meant to come from the stove and the flames.

So what this means is that the vaporizing fuel is sucking so much energy out of the stove body that the stove body is chilling to below the boiling point of the fuel. But surely the heat shunt is meant to be keeping the stove body and the fuel inlet warm, if not hot? Obviously not in this case.

You might wonder whether sticking more of the heat shunt into the flame might work. It might—until the aluminum melted. I do have one heat shunt with a slightly cooked end. This is not a good solution.

The first thing to do for me was to reproduce the problem. After that, I had to figure out why it was happening—in detail, so I could fix it.

I had Ian try a few things first. Was the burner screwed down firmly so there was good pressure on the heat shunt (pink arrow)? Yes. Was there a gap between the heat shunt and the body (blue arrow)—a gap that would obviously be a poor conductor? No. Was the tip of the heat shunt in the flame? Yes.

Conclusion so far? There is not enough heat flowing down the heat shunt. Obvious in hindsight, I know. The next question is why not? Well, first I had to set up a test rig and measure things. I am a firm believer in having real measurements, not vague guesses.

I attached two TI LM35 sensors (the little things on the ends of the wires in the above photo) to the stove. One is on the heat shunt itself (grey/green/brown wires) and one is bolted to the stove body (grey/yellow/brown wires). I had to modify my stove to clamp the latter sensor in place—two tiny stainless steel screws (M2 size) and an aluminum bracket (all visible in the photo). My expectation was that the heat shunt would be a bit hotter than the stove body, and it was. Then I hooked these up to my LabJack T7-Pro data logger and ran some burns. I used my titanium pot (~ 6 in / 160 mm in diameter) and 1 L of water as a load. Readings were taken at one-second intervals.

I let the stove body get a bit over 100 C / 212 F for a bit of time (7 min) before flipping the canister over for a liquid feed. As you can see, when I did this the energy demand from the vaporizing fuel roughly matched the energy coming down the heat shunt, so the temperatures leveled off. Just after nine minutes, I turned the stove up to a bit of a roar, and the energy demand for vaporizing exceeded the available inflow—and so the temperatures dropped.

Around 14 minutes, which is much longer than I normally run my stove for any cooking, I turned the gas off. The energy demand from the fuel stopped, but the heat shunt was still hotter than the body, so the temperature of the stove body rose to match the heat shunt. Then both decayed.

But this was at medium power. What would happen at high power—well beyond what I would normally use? Fairly obviously there would be a greater energy demand and the temperature of the stove body would fall faster/further—to the point where not all the fuel would vaporize and there could be some sputtering and flaring. And this is what Ian had reported.

Ian decided to copy the heat shunt with some thicker aluminum, to see if the greater thermal conductivity would solve the problem. I copied his idea with some 1.6 mm thick stock.

I started off at medium power and a gas feed for the first few minutes. Around three minutes I raised the power to high, although it is hard to see that. So far, so normal. Around nine minutes I flipped the canister to a liquid feed, and the temperatures started to fall, as before. Around 13 minutes I changed to high power, and the temperatures fell faster—again as before. That is, with greater fuel flow, more energy was sucked out of the stove body. This was for a heat shunt with a 60% greater thickness.

What is clear is that switching to high power is still demanding more heat energy from the stove body than is available. My interpretation of this was that the problem was not a lack of thermal conductivity down the heat shunt, but rather that there was just not enough heat energy coming into the heat shunt. That is, the heat shunt was starved of energy.

So I went a bit overboard to test this idea.

The original Heat Shunt has a tip that is ~10 mm wide sticking just into the flame – a millimeter or two. I made a double heat shunt: two arms, and I made the tips 20 mm wide. I stuck the tips 2 mm further into the flame as well. Overboard, right?

Research Scientist. Been walking all my life, mainly off-track - we don't have 'trails' here, and I always go with my wife. Summer and winter, lowland and highland, Australia and Europe. Forced into UL gear by heavy packs and increasing age. :-) Example Gear List at http://www.backpackinglight.com/cgi-bin/backpackinglight/caffins_4_month_gear_list.html BPL email: [email protected]