My Year of Lentils: A Survey of Packaged Vegetarian and Vegan Backpacking Meals (Gear Guide)

Small and mid-sized companies are making increasingly delicious vegan and vegetarian backpacking food. This gear guide covers meals from six of those companies. 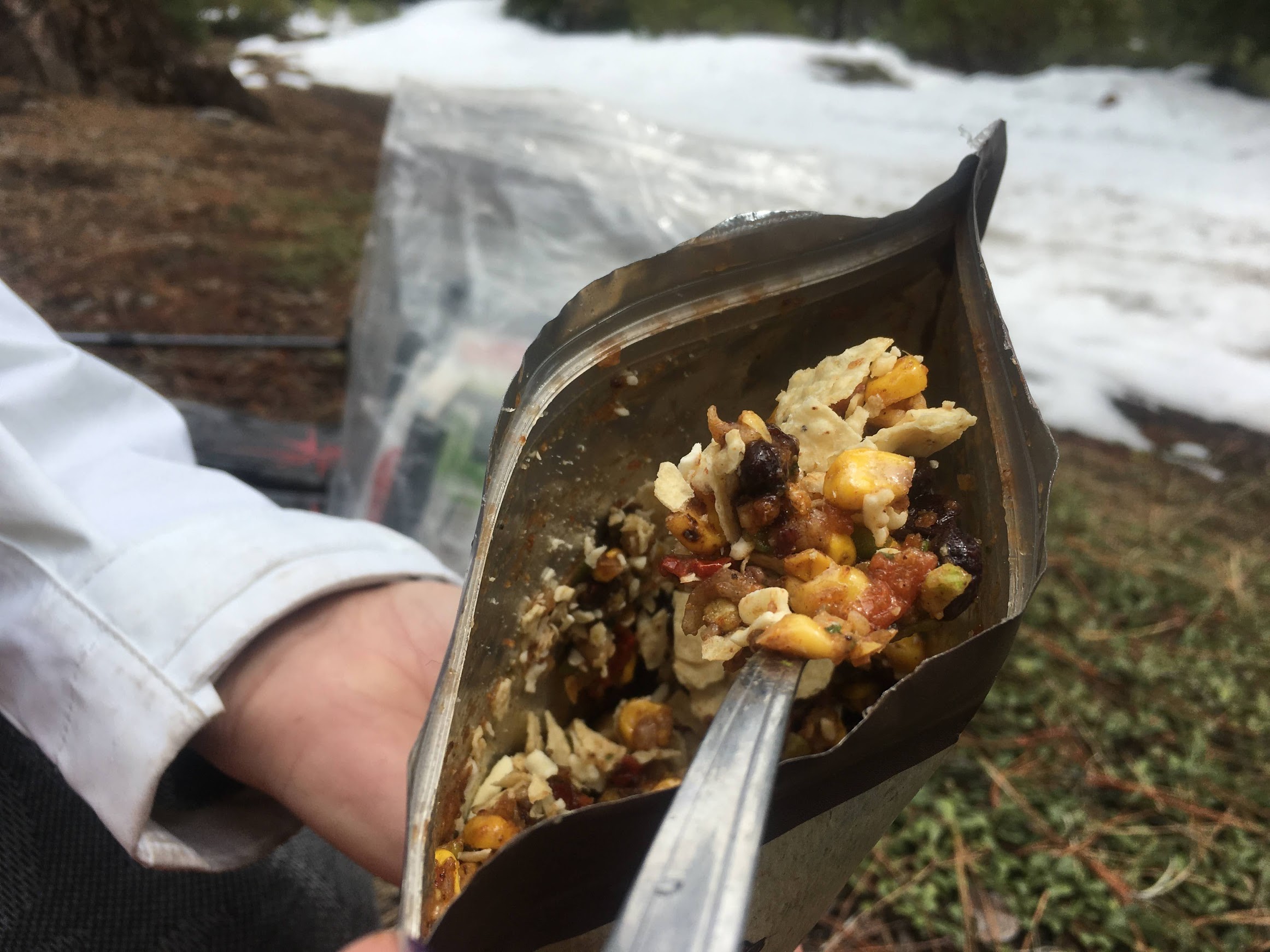 Gone are the days when the only packaged, dehydrated food available for backpackers came from Mountain House or Backpacker’s Pantry. While those two brands still take up a huge share of the market, mid-sized and cottage companies are making an increasing impact, and in the process are transcending the limited, boring, rice-and-pasta-heavy vegetarian flavors of the past.

This gear guide will cover some of the vegetarian and vegan options available from six of these companies.

In Defense of the Packaged Meal

Many ultralight backpackers enjoy creating their own dehydrated or freeze-dried backpacking meals. Recently at Backpacking Light, we published a detailed article on making your own backpacking meals. We also did a podcast that covers the same topic. Between those two resources and companies like Backcountry Foodie, you should have everything you need to get started (or refine your skills) with backpacking meal prep.

But sometimes trips come up suddenly. Many folks have small apartments with no room to store food prep gear. And some people just don’t enjoy cooking, or they would rather devote their time and energy elsewhere. For all these reasons, pre-packaged freeze-dried or dehydrated meals still have a place in the tool kit of an ultralight backpacker.

I’m certainly interested in evaluating things like cost, cooking time, caloric density, nutritional quality, macro-nutrient make-up, packability, and even the mission and values of the companies whose food I tested – and from time to time I mention those things in this guide. I list net weight, total Calories, and Calories-per-ounce for each meal I review. But my chief concerns are taste, texture, and satisfaction. And yes, these are somewhat subjective measurements. I enlisted the help of my wife Rachael for second opinions on many of the meals.

Without meat, many packaged backpacking meals become boring, sludgy messes of rice and pasta, even if they are nutritionally dense. That kind of meal gets real old, real fast, and ultimately doesn’t interest me even if it hits a sweet spot between nutritional value, cooking time, and cost. I’m a big proponent of the psychological benefits of a pleasurable, satisfying meal in the backcountry, and this guide reflects that concern.

This article began almost exactly a year ago as I began planning my 2020 thru-hikes. I had major plans to cover almost 800 miles of trail all around the country, and thought that my big year would be a great opportunity to test food from a diverse array of manufacturers. And then, of course, came Covid-19. Not only did my proposed testing trips get canceled or shortened, but many of the companies I was in communication with suddenly didn’t have the stock to send me samples because of panic buying.

I managed to squeeze in a few Covid-19-safe expeditions, and so the bulk of my testing occurred during multi-day trips. But I ended up having to test at least 20% of these meals while on day-hikes or one-night trips. I made a point of always cooking the meals with my standard upright canister stove setup, and all of the meals were consumed outside and in the woods. Because I conducted my testing over the course of a year, my testing conditions ranged from cold and snowy to warm and dry and everything in between, at altitudes anywhere from sea-level to 10,000 ft (3,000 m).

I was a little more lenient with the category than Ryan Jordan in his Dehydrated and Freeze-Dried Backpacking Dinners Gear Guide. There, he limited his scope to food that could be, “cooked by pouring boiled water into the food pouch and waiting a set amount of time (defined by the manufacturer) for the food to rehydrate. Meals that require cooking on a stove (e.g., simmering), or transfer to another container for eating, are not included. In addition, this gear guide does not include so-called self-heating meals (e.g., OMeals), which are neither dehydrated nor freeze-dried.”

I didn’t include self-heating meals in this guide, but I did include some meals from companies that worked better if I transferred them to a pot for cooking (Outdoor Herbivore and Packit Gourmet, among others, have a few of these kinds of meals).

While Ryan kept his article to dinners or entrees only, I asked companies to send me whatever they felt their tastiest, most crowd-pleasing vegetarian or vegan options were. So this guide will include dinners, breakfasts, snacks, and appetizers. Many of the meals I tested were cold-soak options.

I intentionally stayed away from companies that are easily found in major outdoor stores, with one exception: Good To-Go. You can find them at REI now, but they still don’t have the market saturation of brands like Mountain House, Alpine Aire, or Backpacker’s Pantry, so I thought they warranted inclusion. If you want a detailed analysis of food from those larger companies, I highly recommend Ryan’s article (mentioned above).

The rest of the companies I found by conducting a survey on the Backpacking Light forums and asking members to recommend brands they thought had the best vegetarian or vegan options. Not all of the brands that were recommended are included here, mostly because of Covid-19-panic-buying-induced inventory shortfalls.

It’s also important to note that this guide isn’t comprehensive. I didn’t test every vegetarian and vegan option from every cottage company in America. Several popped into existence as I was midway through my test, and at some point, I had to make the decision to just stick with what I’d already collected. Additionally, not everything I tested is included in this guide. This holds particularly true with breakfast foods, which tended to be some variation on oatmeal or muesli. I included the options I felt warranted discussion, for good or ill.

My test ultimately covered a total of 50 selections (36 of which are included in this guide) from six different companies:

Andrew Marshall is the Managing Editor and Podcast Producer of Backpacking Light and the co-founder of  Backpacking Routes. Andrew is an essayist, poet, painter, and fine-art photographer, with work regularly appearing in prestigious but low-paying national publications. He unashamedly drinks instant coffee when in the backcountry. You can find him on Instagram, Twitter, and at his website. Warning: social media content is mostly cat-related.