You are here: Home / Member Trip Reports / Ruby Crest Trail – Out & Back

Ruby Crest Trail – Out & Back

This trip report describes an out and back hike on a portion of the Ruby Crest Trail (RCT) that I did with two friends over five days in early August 2021.

The Ruby Crest Trail is in the Ruby Mountains in northeast Nevada. Our trip started and finished at the Overland Lake trailhead at an elevation of approximately 6,700 ft. on the east side of the range. Note that I did not record a GPX track during the hike, so elevations and distances cited in this report are approximated from the Gaia GPS route I created after the hike.

Our trip was intended to be a point-to-point, northbound hike of the entire Ruby Crest Trail. I met my friends on Sunday afternoon in Elko, Nevada. We planned to leave a car at the Lamoille Canyon Roads End trailhead, the north end of the trail, Monday morning, and then drive together down to the south end of the trail at the Green Mountain trailhead at Harrison Pass. I spent Sunday night at the Hampton Inn in Elko and would recommend it. We heard thunderstorms during the night, and as we drove up Lamoille Canyon early Monday morning, we found that the road was closed twelve miles from the trailhead due to overnight damage from flash flooding. We settled on an alternate plan to hike up to the RCT from the east side on the Overland Lake trail, then hike north along the RCT, spend a layover day near the north end, and then hike back to Overland Lake and out to the cars.

We backtracked down Lamoille Canyon and then drove south on Hwy 228 on the west side of the range to Harrison Pass Road, and then east over Harrison Pass, and north again on Hwy 767, eventually finding the rugged road one mile road to the Overland Lake trailhead. I was able to get to within about a hundred yards of the end of the road and trailhead proper in my Subaru Crosstrek. My friends in their Nissan Xterra cruised right past where I chickened out and parked at the trailhead, where there was space for at least half a dozen vehicles.

We finally got started on our hike around 10am and were pleased to find the temperature in the low 70s with blue sky and high clouds. The trail was well maintained and worked its way up and across several drainages as it climbed steadily. The high desert terrain was rugged and striking but offered no shade or water. After around five miles and roughly twenty-five hundred feet of climbing, we reached the Ruby Crest Trail. From there we headed south about a quarter mile and up another couple hundred feet to Overland Lake at 9,450 ft. Per Gaia GPS, the route from the trailhead up to the lake is 5.25 miles with a 2,750 ft. climb. Tough start!

We picked from several adequate campsites near the lake outlet. The best site on the small peninsula across from the old cabin was occupied as was a nice, large site on the east shore; a horse outfitter had dropped off a group there just before we arrived. We encountered no mosquitos or other pests here or anywhere else on the trail.

Five miles from Overland Lake the trail achieves the actual crest of the Ruby Mountains on an unnamed peak at 10,200 ft. The views here, and for the rest of the day while we traversed the crest, exceeded all expectations.

After a short rest, we gave up a big chunk of hard-earned elevation and dropped down to the Long Canyon saddle before tackling the first and probably hardest of three climbs along the crest, reaching another unnamed peak at 10,600 ft. Two more descents and climbs followed before reaching Wines Peak, the highest point on the trail at 10,800 ft, roughly 10.6 trail miles from Overland Lake.

Our plan was to camp at the Furlong Trail junction if we could find water, or detour off the RCT and down the Furlong Trail to N. Furlong Lake if not. Thankfully, the nice campsite at the junction was unoccupied and we found the spring mentioned in several online RCT resources. After twelve miles and roughly 4,750 ft. of climbing we were thoroughly beat.

As mentioned, once we left the Overland Lake drainage there was no water and virtually no shade. We were lucky in that the temperature was in the low seventies and there was a constant breeze. Nevertheless, I went through all the five liters of water I started out with. I can only imagine how much harder that section would have been had it been hotter. I should also mention that, although we saw some distant thunderheads, we had no rain or lightning. This section is 100% exposed and no place to be during a thunderstorm.

We planned to take Wednesday as a layover day, doing a day hike to Favre Lake or possibly beyond, before turning around and re-tracing our steps back to the cars on Thursday and Friday. We all felt weary on Wednesday morning but nevertheless packed up some water and snacks and headed north on the RCT, climbing the saddle between the Furlong and Kleckner Creek drainages. We continued down, crossing the nicely flowing Kleckner Creek (the outlet from Favre Lake, I believe), and on the to the Favre Lake trail. This section of the RCT was lovely, with mixed timber and plenty of wildflowers. We followed the short side-trail to Favre Lake and took a break. I didn’t find Favre Lake particularly compelling. The shoreline was mostly brush and the basin in which it sits is unremarkable.

We considered continuing to Liberty Lake but the next day’s task of repeating the long day on the crest weighed heavily and we decided to head back to our camp at the Furlong Trail junction. I regret that we did not get to see Liberty Lake or the lakes in upper Lamoille Canyon.

On Thursday morning we headed back south on the RCT. The morning climb to Wines Peak, fully laden with water, was cruel. But the weather was cool and as the legs warmed, we hit our stride. Thursday was much windier but still dry. We reached the end of the crest in good form but the traverse of the Overland Lake drainage and final climb back up to Overland Lake was brutal.

We arrived at Overland Lake and found it transformed. Monday’s placid and inviting water had turned to whitecaps in a heavy wind. We struggled to make camp in the gusts and laid awake all night as the wind roared in the trees. Around 4:00am I smelled smoke and stuck my head outside to find the night sky opaque in my headlamp beam and the reflections of ash whipping by in the still howling wind. We quickly broke camp and headed out in the dark. Not knowing where the fire was, we could only hope our route back down to the Overland Lake trailhead wasn’t blocked. As it turned out, we never did find out where the fire was, and while the morning sun dawned blood red, our hike down to the trailhead was uneventful.

In summary, this was a challenging and extremely rewarding trip covering around forty miles and over fourteen thousand feet of climbing. I won’t try to describe the beauty, ruggedness, and isolation; it is worth seeing for yourself. 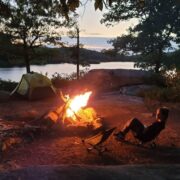 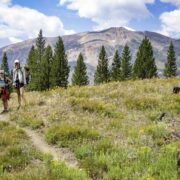 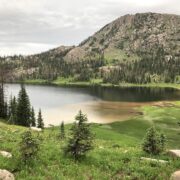