The Garmin inReach Messenger provides seamless messaging across cellular, WiFi, and satellite networks for only 4.0 ounces. It offers some compelling features over its closest competitor, the Zoleo Satellite Communicator, including an on-device display that makes it a viable standalone device when used without a smartphone. 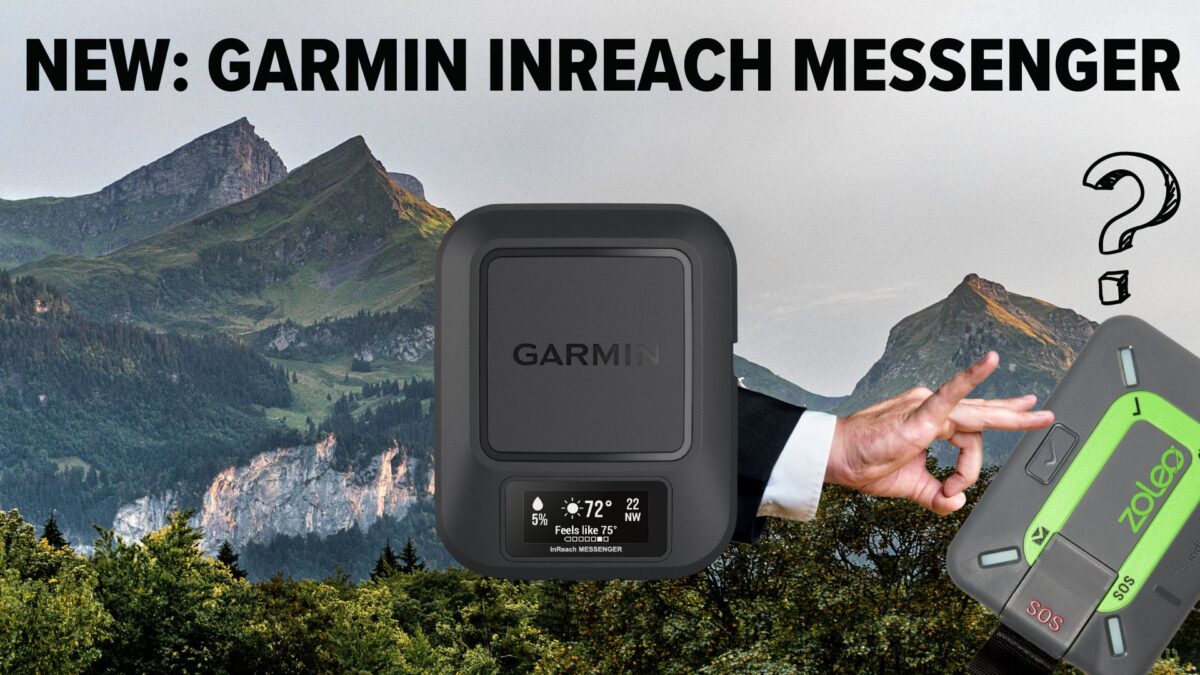 This article was originally published on September 27, 2022 and updated with new information on September 30, 2022.

Editor’s Note: this is a preview of a newly-announced product:

We’re testing the Garmin inReach Messenger and the Zoleo Satellite Communicator side-by-side over the next several weeks. This testing will focus primarily on:

Results will be published in an update at this URL in November. In the meantime, we hope you find this summary valuable as we continue to learn about lightweight devices for satellite messaging, tracking, and navigation.

Table of Contents • Note: some sections may only be available to Premium or Unlimited Members.

Like the Zoleo Satellite Communicator and the Somewear Global Hotspot, the Garmin inReach Messenger offers seamless messaging across different types of networks (cellular/WiFi and satellite) and selects the most readily-available network without interrupting message conversations.

Unlike the Zoleo or Somewear products, however, the Garmin inReach Messenger offers the following unique features:

Standalone vs. paired messengers. Standalone messengers provide basic messaging functionality, including the ability to send a preset check-in message or initiate an SOS response. However, pairing the messenger to a smartphone (and the messenger’s companion app) is the only way to access a messenger’s full capabilities. The Garmin inReach Mini 2 is a typical example of a standalone messenger, but pairing it with a smartphone and the Garmin Explore app provides easier access to messaging features and more robust mapping. On the other hand, the Zoleo Satellite Communicator and Somewear Global Hotspot provide minimal functionality as standalone devices and require pairing to their companion apps to use them productively as messaging devices. The Garmin inReach Messenger falls in between these two extremes.

Comparison: inReach vs. Zoleo vs. SPOT vs. Somewear messengers

The following table compares the Garmin inReach Messenger to the Zoleo Satellite Communicator, SPOT Gen4, SPOT X, ACR Bivy Stick, Garmin inReach Mini 2, and Somewear Global Hotspot. This collection of messengers spans the range of both 1- and 2-way satellite messengers that offer different capabilities with messaging, tracking, mapping, and navigation – and their functionality when paired with a smartphone or not.

Scroll to the right to view all columns of this table.

* For this comparison, we define a “check-in” message as a preset message that can be sent to a group of contacts you specify and a “custom” message that can be specified on the device to say whatever you want it to say (via a physical or online keyboard). Some devices offer the ability to send more than one type of preset message (e.g., the Spot Gen4 calls these two message types check-in and custom messages, but neither are customizable without configuring them via a live internet connection).

** Seamless messaging refers to a device’s ability to maintain message conversations in one place (i.e., inside the device app on your smartphone) across cellular, WiFi, and satellite networks.

**** IPX7 – Can withstand incidental exposure to water up to 1 meter for up to 30 minutes. IPX8 – can withstand continuous immersion of water exceeding 1 meter in depth (devices are usually hermetically-sealed).

The unique features of the Garmin inReach Messenger include its on-device display, group messaging conversations, TracBack, and reverse charging.

The Garmin inReach Messenger features a simple on-device display screen that offers notable feedback and functionality that can’t be accessed on the Zoleo Satellite Communicator or Somewear Global Hotspot without pairing them to a Smartphone:

Most satellite messaging devices can send messages to groups (“broadcast” messaging), but when one group member replies, the reply is delivered only to the sender.

The Garmin inReach Messenger is the first satellite messaging device that can both send and receive messages among a group of people while maintaining the group during the entire conversation – similar to how group messaging works in most smartphone applications.

TracBack is Garmin’s breadcrumb application. If you turn on TracBack on a TracBack-compatible inReach or GPS device, the unit tracks your route via waypoint breadcrumbs that it saves in its memory. Then, if you’d like to follow the exact route backward, you simply activate TracBack’s reversal, and the device will guide you back to your origination point following the same route.

TracBack can be a useful feature for not getting lost during nighttime bathroom forays into the dark woods, mushroom or berry or elk hunters following signs on the ground rather than paying attention to where they’re traveling, or negotiating through (and back) thick vegetation via game trails and brush-free corridors.

It’s not surprising that the Garmin inReach Messenger provides TracBack. That it allows it to be used without a paired smartphone is welcome.

Even though the Garmin inReach Messenger is a capable device on its own when not paired to a smartphone, the smartphone is still required to access custom on-the-fly messaging. However, as many of us Garmin inReach Mini users will testify, the moment our smartphone dies is the moment that “typing” custom messages on the Mini becomes awkward enough to elicit enormous frustration. This is particularly problematic if you don’t have access to a portable battery charger, or in the case of an accident, your phone charger is inaccessible.

Does the Garmin inReach Messenger have a dedicated phone number?

A dedicated phone number on a satellite device makes it easier for anyone with a cell phone and SMS capability to send a text message to the device.

The Garmin inReach Messenger does not have a dedicated phone number. Here’s why (response from Garmin):

The inReach Messenger does not have a dedicated phone number. We have found significant challenges with SMS messaging, things like sending a message with a map link or delivering to a country with a restrictive cell carrier. We’ve found that many of our international customers are using internet driven apps like Whatsapp or Facebook Messenger instead of SMS anyway. We chose to focus our efforts on our Garmin Messenger app and delivering a rich messaging experience where participants can see things like delivery confirmation, read/unread state, and even if a friend or family member has joined the Messenger app community. This gives us the freedom to do things like send a message location or create a group message and know that we control the experience from within our own app.

Keep in mind that we do still support the other methods of communicating with someone who doesn’t want to install the Messenger app, you can send them a message using their SMS number or their email address. You can also send them your MapShare link which has the ability for a visitor to send a message to the inReach device owner. We feel that the Garmin Messenger app is a good solution for close friends and family who want the rich messaging experience and we feel that the original SMS/email/MapShare solution is a reasonable solution for those who don’t want the app.

How will the inReach Mini 2 integrate with the Garmin Messenger (when that support is released) and Garmin Explore apps?

Please note that the inReach Mini 2 will be compatible with the Garmin Messenger app when we release our firmware update, however the first generation inReach Mini will not be compatible. The first generation Mini was launched in 2018 and has some hardware limitations that prevent us from bringing it forward to new apps like the Explore app and the Messenger app. The inReach Mini still works as designed with the Earthmate app for messaging, tracking, safety, planning and navigating, it’s just not able to take advantage of the internet messaging features found in the Garmin Messenger app.

As you’ve seen, the inReach Messenger device does not support any planning or navigation features and is not compatible with the Explore app. Our inReach devices like the inReach Mini 2 will use both apps for their different specialties – the Messenger app for messaging, tracking, and safety, the Explore app for planning, navigating, and reviewing activities. The two apps will be seamlessly linked so that the user doesn’t have to exit one app to go to the other, they will just choose the Messages tab in the Explore app to have the Garmin Messenger app open with the Messages tab displayed. The same thing will happen if someone using the Garmin Messenger app views details on a message and chooses to view the location on the map, the Explore app will open to show that detail.

How do people using the inReach Mini (or Mini 2) initiate contact with people using inReach Messengers in the backcountry? How about vice versa?

Until now, internet debaters have been drawn to the (mostly strawman) discussion of the Garmin inReach Mini vs. the Zoleo Satellite Communicator. However, these two devices have notably different use cases and purposes. One (the Zoleo) is primarily a network-independent messaging device requiring a paired smartphone, and the other (the inReach Mini) is a satellite-only messaging, tracking, and navigation device that doesn’t require a paired smartphone to access its complete feature set.