You are here: Home / Articles / Can Apple’s New iPhone 14 Replace Your Garmin inReach? 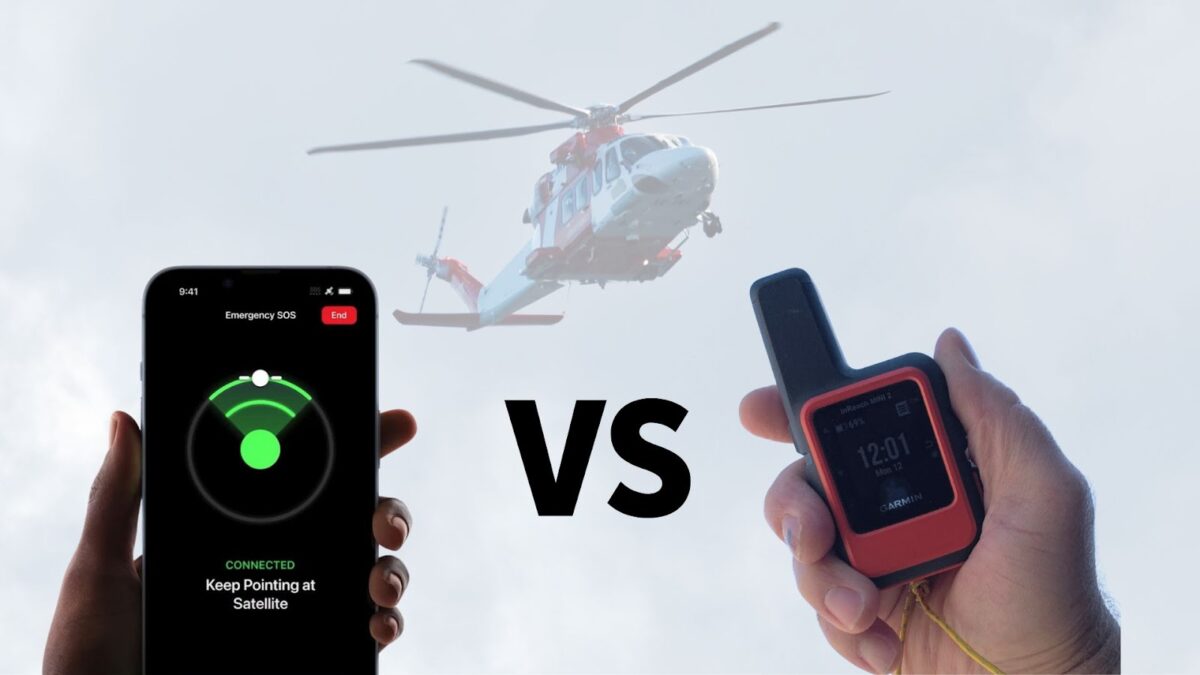 When Apple announced the SOS/satellite messaging features of its new iPhone 14, three questions immediately bubbled to the surface of the outdoor community’s conversation  (see Backpacking Light’s forum thread introducing the satellite capabilities on the iPhone 14):

Will Apple’s new iPhone 14 lead to more work for search and rescue crews?

In Backpacking Light’s forums and elsewhere, I encountered concern over the potential abuse of the iPhone 14’s new SOS feature. The worry seemed centered around stories of hikers and backpackers using Garmin inReach devices to call for help when they could easily self-rescue instead.

One anecdote shared on our forum involved a young woman calling search and rescue (SAR) so she could order a pizza. People are concerned that SOS-enabled phones will magnify the number of unnecessary rescues and increase the overall number of rescues.

These concerns got me wondering – what’s the percentage of satellite–messenger-initiated incidents involving unnecessary rescues vs. satellite-messenger-initiated incidents involving real danger where people cannot self-rescue? I reached out to some search and rescue groups around the heavily trafficked Rocky Mountain National Park and got an interesting answer – it’s hard to say.

“I can tell you right now that data is a problem for us, and we won’t be able to give you much by way of stats. We’re working on funding for a statewide, consistent data collection system, but it has been an uphill battle,” said Anna De Battiste, Public Information Officer (PIO) for the Colorado Search and Rescue Association.

When I asked Drew Hildner, PIO of the Rocky Mountain Rescue Group, the same question, he answered with a simple “don’t know.”  What Hildner could tell me for sure was that the percentage of search and rescue actions initiated in the Rockies by satellite messenger devices is in the single digits.

Jay Christianson, PIO for the Colorado Search and Rescue Association, told me the same thing.

“The percentage of people that activate [the SOS features on satellite messengers] is quite low currently,” he said. “Even if the method of activation [shifts to satellite-enabled cell phones over dedicated satellite messengers], I really do not see a shift in the parties that will need rescuing. Realistically most parties that are considering search and rescue are in a position where self-rescue is impossible, be it physically or mentally, and from the SAR team position, early activation is beneficial so we can intervene before things get worse.”

This last takeaway is crucial. Every SAR professional I interviewed for this story took care to emphasize they’d rather people be safe than sorry. The vibe I’m getting is that the collective handwringing on behalf of the SAR community’s time and energy is a projection.

In fact, Jay Christianson sees the upcoming proliferation of SOS-enabled cell phones as a positive because it will allow SAR teams to intervene more quickly in a larger percentage of situations – saving both lives and resources.

“Having the ability to actively locate a subject in the field greatly reduces the full mission timeline. Many missions can have a multi-hour access time; if a team does not have a precise location, this can complicate access. This earlier arrival allows for early intervention with the subject to prevent potentially worse issues,” he said.

Remember, most SAR actions are not initiated by satellite messengers, meaning most SAR teams work without precise location data. So the upshot of satellite-messenger-enabled cell phones? More lost/injured hikers with precise data to give to SAR teams means quicker missions and less wasted money and human power, not more.

So what about the idea that Apple’s new SOS technology might encourage more folks to make stupid choices, leading to more SAR actions? None of the professionals I interviewed are worried about it. The logic seems to be that the type of person who’s going to set out for the summit of a 14er at three in the afternoon with half a bottle of water is already doing that. An SOS button in their pocket is not a deciding factor in that decision.

“I do not imagine that this additive resource in cell technology will provide the tipping point for people to push their limits of accessibility and ability,” said Jay Christianson.

Will the Apple iPhone 14 replace my Garmin inReach?

With the pearl-clutching around SAR-team time and energy out of the way, we are left with one question. Should the iPhone 14, with its satellite messaging and location broadcasting capabilities, replace your dedicated satellite messaging device? It’s a tempting proposition – who doesn’t love removing an item from their pack in favor of multi-use gear?

But the consensus answer on our forum, which I agree with, is no – for now. Most people believe that the iPhones 14’s SOS features are useful as a redundant safety system but not a full replacement for dedicated satellite messengers. Here are the three main reasons, as vocalized by Backpacking Light community members and supported by the search and rescue professionals I interviewed for this story:

We must expect this last point to change, and soon. In August, T-Mobile announced a partnership with SpaceX to make two-way messaging a reality, and we can assume other providers will attempt to provide the same functionality. Likewise, smartphones will continue to become more rugged and have longer battery life. It’s not outside the realm of possibility that Apple could release an iPhone dedicated to adventure athletes along the same lines as its recently unveiled Apple Watch Ultra.

In the near future, smartphone technology will continue to advance, and Silicon Valley will continue to tap into the outdoor market with new products. As this happens, we may begin to see some ultralight backpackers ditching dedicated satellite messengers completely in favor of smartphones, just as we now see some members of our community ditching dedicated cameras in the same fashion.

Peering further into the future, I can imagine once-silent mountain evenings now clotted with the noise pollution of a dozen hikers all voice chatting to friends and family back home – similar to the current scourge of Bluetooth speakers plaguing our public lands or the Bay Area business people having loud financial phone calls as they conduct “walking meetings” along our local trails.  As always, it is not the technology that matters but how we choose to use it – or, to be more precise – how we choose not to.

Andrew Marshall is the former Managing Editor and Podcast Producer of Backpacking Light. Andrew is an essayist, poet, painter, and fine-art photographer, with work regularly appearing in prestigious but low-paying national publications. He unashamedly drinks instant coffee when in the backcountry. You can find him on Instagram, Twitter, and at his website. Warning: social media content is mostly cat-related.