This article describes the development of my 4th generation of Remote Inverted-Canister Winter Stoves. 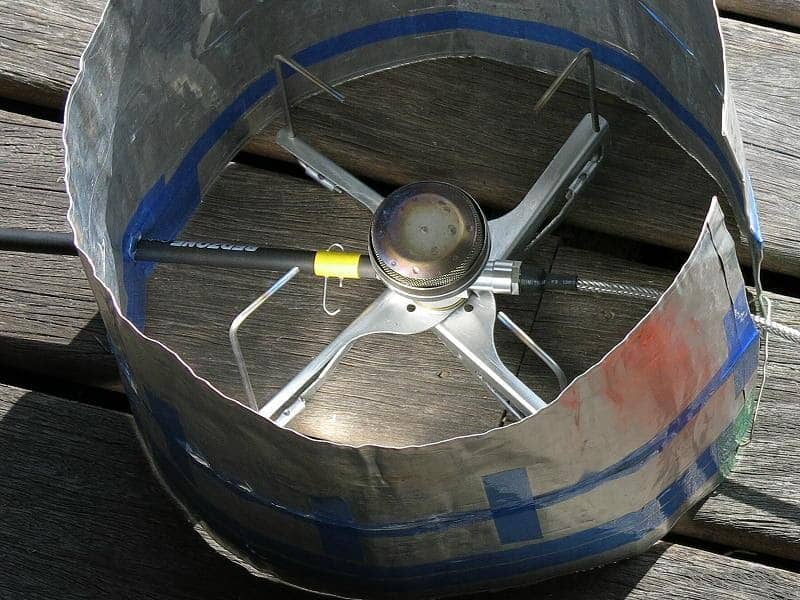 This article describes the development of my 4th generation of Remote Inverted-Canister Winter Stoves. You can find articles about the previous versions here at BPL in the series’ Evolution of a Winter Stove (5 parts) and DIY Backpacking Stove: An Ultralight Vortex Burner (5 parts).

It all started years ago when I was contemplating the weight of a number of commercial remote canister stoves, and wondering why they had to be so heavy. In many cases, it seemed as though someone with little knowledge of stove engineering had just thrown bits together with no regard for either weight or elegance. Some of the results were clunky, and others were just weird.

At the same time I was looking at some of the massive pre-heat tubes found on commercial remote canister stoves, and wondering why they were needed when butane boils below 0 deg C and propane boils below -40 deg C. It seemed to me that the designers of these stoves were simply copying, rather blindly, the design of current white gas and kero stoves. Kerosene boils somewhere between 150 deg C and 300 deg C, so the comparison seems ridiculous.

Actual development work started when I was asked to review the Brunton Stove Stand. It allowed me to put a hose onto my favourite upright canister stove (a Snow Peak GST-100). But it had a solid metal pipe where the hose connected to the body, and I wondered whether I could conduct enough heat in there to vaporise the propane/butane fuel mix as it arrived.

Well, no use wondering: go and do. So I did, as above (see photo), and it worked fine. There was enough heat coming down the metal strip (copper) from the flame to the pipe. After all, the pipe had only to reach something like +5 deg C. Interestingly, while a copper strip (thermal conductivity 400 W/m∙K) worked fine, a brass (61-111 W/m∙K) strip was not so good. For interest, plain aluminium is 236 W/m∙K while Ti is 22 W/m∙K. Obviously, good thermal conductivity would be needed. This metal strip is now called the Heat Shunt.

But the original steel legs on the Brunton stand were heavy, the large base was heavy, and the hose was stiff. If I did some engineering, made some lighter legs, and integrated the needle valve with the base, better was possible. And so the long journey got going.

On one trip in the Pyrenees, the brass thread (where the stove connects to a canister) on my GST-100 had been stripped by the very rough steel thread on the screw-thread canisters. I had to suddenly buy a Campingaz stove (lumpy and heavy) and Campingaz canisters (nice). I wanted to get away from that crude rough steel thread, and I had quite a few nice full Powermax canisters on the shelf. Could I make a universal canister connector?

Jumping ahead several years, this is what I envisaged: compatible with screw-thread, Campingaz and Powermax, and having a fast ultra-reliable shut-off facility at the canister, separate from the control valve. It was possible, and it has been described in my previous stove articles. At the same time, I was able to make a thoroughly satisfactory but light-weight armoured hose, as seen in the above and below photos.

But developing the whole system had taken a year or two, and I had become a bit impatient. I decided to use a commercial burner head on my stove body and legs to get things going. I could pick a burner head which was light and effective, and it would save me a lot of work. I used two stoves for this: at first the Fire Maple FMS-116 and later on the Fire Maple FMS-300.

The FMS-300 had, to my mind, a better gap between the burner head and the pot, permitting better combustion and lower CO levels. Also, I cheated slightly and reused the needle valves out of the stoves. Purely as a side note, you might like to compare the Fire Maple FMS-300 (on the left) with the BRS-3000t: there is not a lot of difference, and I believe the FMS version was first. A performance comparison between the two can be found in Backpacking Light’s most recent upright canister stove gear guide.

Anyhow, my V1 stove was successful, and I sold well over 100 of them. I was very pleased, and my wife was impressed (which was not easy to do).

Despite the sales, I was not entirely happy with using a commercial burner head. I wanted to make my own burner head. So I started to experiment (and use up a lot of gas in the process).

I was well on the way down this path when I suddenly started thinking about Vortex Burners: they are very different from the conventional designs above. I was hooked and spent the next few years happily playing with them – to the point of producing two slightly different models and selling them as well.

Out of interest, I examined them closely. All very nice in fact. Some were made from titanium tubing I had lying around, and others were made from machined aluminum. They were all very light, and they all made a nice broad flame.

Then I looked at the stove body design that came with these heads in the left-overs box: that’s the bit held in the vise in the photo above. It’s rather long, with a pivoting connection for the hose, and I began to remember that both the length of the stove body and the pivot on the hose had both given me a lot of trouble.

The long stove body presented two problems. The needle valve is perforce directly under the jet. This means a delicate drilling operation for a precisely concentric 1 mm hole at the end of a long thin (4 mm) bore, and I could not find a suitable stock drill bit for this. I had to get some custom-made in China for it. In addition, machining a long thin aluminum needle to fit down the long bore had been difficult: the long thin aluminum rod insisted on flexing in the lathe.

I tried using some titanium rod for the needle, and this machined OK, but actual field use revealed a terminal problem when I shut the stove down after use. You see, aluminum has a significantly higher coefficient of thermal expansion than titanium. When the stove cooled down the aluminum body shrank more than the titanium needle, which meant that the needle ended up jammed hard in the orifice. It was very hard to reopen the valve. Long-term reliability? Very poor. Not good enough.

Then I looked at the pivot connection for the hose: the little bit sticking down from the long stove body, near the black O-ring on the spare needle valve. I could buy larger versions of these pivots, but not small ones. My memory was that machining these had been even more complex and slow. The problem lay in how you hold them. There had also been a small problem with the gas flow: going from the pivot connection into the side of the needle valve. There was not a lot of room at the bend for the fuel. I began to remember why I had abandoned the idea and switched to designing Vortex Burners.

But still, I wondered whether I could do better now, with the advantage of many more years of stove design. Ah, the challenge! Further optimisation of the burner head, and a much smaller and simpler stove body at least.

The first decision was that the revised stove body had to be very short, both to keep the weight down and to make the machining easier.

The hose connection was not difficult: I had developed a neat simple connection method for previous stoves which could be further developed.

Part of the problem with the long stove body had been having the hose connection at the same end of the stove body as the valve, even though it had ‘seemed like a good idea at the time’. If I put the hose at the other end, as in V1 as shown in the previous photo, everything fitted nicely.

While both the stove body and the needle valve are small, one does have to be able to adjust the valve while the stove is running. I soon found out that there was a fair bit of radiation that close to the stove body (rather warm fingers), so some sort of handle would be needed. The V3 stove used a long Ti wire handle, but the machining was a bit complex. Perhaps a very light bit of tubing could be made to connect somehow with the short but solid handle on the needle valve?

Carbon fibre tube is very strong and quite light, and I had a fair amount of bits and pieces leftover from making tunnel tents. It was a simple matter to make the handles on the needles fit snugly inside the CF tubing. However, the tube had to not only fit, but connect reliably so the valve could be turned reliably. Since the CF tube could be rather long, it was also necessary that it should be removable for packing.

I chamfered the entry into the slot just a little so that I could simply push the CF handle over the end of the valve and spin it a bit to get the wire to drop into the slot. Should the connection ever start to get a bit loose, a tiny bit of a crimp in the wire would restore the grip. In practice, this was very effective.

This article covers all the easy bits. The next article will go into some detail about the development work needed to get a design that satisfied me: optimising the burner head and coming up with a neat solution for the stove legs and the pot supports.