You are here: Home / Articles / By The Numbers: How Bad is Thermal Degradation in Synthetic Insulation?

By The Numbers: How Bad is Thermal Degradation in Synthetic Insulation?

The latest findings on thermal degradation in synthetic insulation from Stephen Seeber may surprise you in this By The Numbers column. 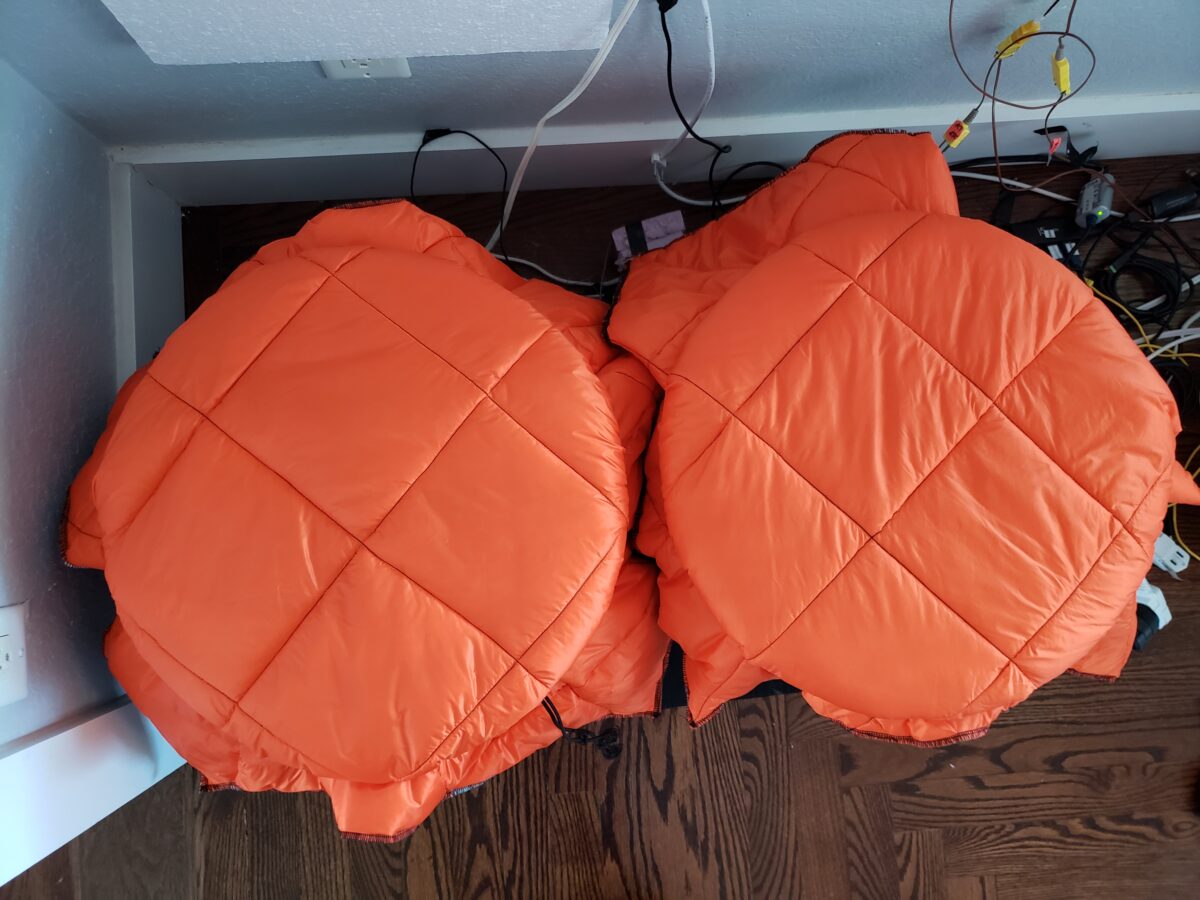 A common concern about synthetic non-woven batt insulation is that it gradually loses its loft through normal use and that, as a result, insulated garments will suffer a loss of warmth and require replacement. Experience suggests that down garments will have a longer life expectancy than their synthetic counterparts. There are many discussions in our forums concerning this issue.

In this article, we perform aging tests on a short-staple insulation (Primaloft Gold 6 oz per square yard (osy)) and a continuous filament insulation (Climashield Apex 6 osy) and then measure their impact on thermal performance. The results of this study demonstrate that the aging simulation can impact the insulation in terms of loft and/or warmth. However, the thermal degradation was less than expected.

In the case of the short-staple insulation (Primaloft), increases in fiber diameter over time may have mitigated significant and sometimes rapid deterioration reported for older versions of this brand of synthetic insulation. It appears that for the two major brands of insulation tested here, proper washing and packing techniques may permit synthetic insulations to enjoy prolonged useful service. It will take additional work to reach a more concrete conclusion on the subject of insulation aging and thermal degradation, but this article will lay the foundation for further research to be published in future articles.

How can we simulate aging in insulation?

Any use that results in a reduced volume of trapped air in the insulation can be considered an aging mechanism. Typically, aging occurs when sheer and stress forces reduce the rigidity of the insulation fibers so that the fibers cannot maintain their original role in supporting the insulation matt. (To review or learn about the structure and resilience of non-woven insulation, see part one of this series: Thermal Performance Measurements of Synthetic Insulations.)

There are two main sources of stress that typically occur during normal use: washing and stuffing. Both of these can impart substantial forces into the insulation fibers.

In a webinar video titled Synthetic Insulation, Backpacking Light Founder/Publisher Ryan Jordan describes a test he conducted where he used substantial force to repeatedly stuff synthetic insulated garments into compression sacks. He then cut open the garments and found that the insulation fibers were broken from the high force used to stuff the garments. Ryan concluded that stuffing force should be minimal in order to avoid damage to fragile insulation fibers.

In a recent article, Ryan describes a new technique he uses to measure the compressibility of synthetic insulation. Here, he stuffs a garment into a cylindrical container (a bear canister). The compression is accomplished by placing a 5-pound barbell weight on the garment. When compressed beneath the weight, Ryan can measure the displacement and determine the space required by the compressed garment. It appears that under this technique, he has not noted degradation of the insulation. Ryan’s tests suggest that severe compression can damage synthetic insulation fibers, but moderate or minimal compression does not.

These tests do not necessarily distinguish between the behavior of short-staple insulation vs. continuous filament insulation. However, these two techniques seem to provide a rough guide for the treatment of insulation that will minimize or avoid degradation due to stuffing. A machine that applies measured compressive forces repeatedly may be used to quantify how much pressure can produce unacceptable degradation of synthetic insulation. Such a test procedure would be complex and require a device that I do not possess. Simply filling various sizes of stuff sacks and testing for loft loss and thermal resistance loss is a possible technique that could be used. However, it would be a long, cumbersome test process and would not provide any quantitative guidance. Thus, until I figure out a compression test that is practical to conduct, an alternative test is needed.

An alternative method was used by Phillip Gibson of the U.S. Army RD&E Natick Center1 to evaluate the loss of thermal performance due to repeated laundering cycles. We have adopted this approach for our study.

It should be noted that Wiggy’s uses a version of Climashield continuous filament insulation for their sleeping bags. This insulation is laminated to a backing fabric at the Wiggy’s factory to provide additional strength. It is also interesting to note that Wiggy’s manufactures bags for emergency use in US Air Force aircraft. These bags are compressed under high pressure and then shrink-wrapped for long-term storage as part of emergency kits. The shrink-wrapped package for an Ultima Thule bag, rated for −20 °F (−29 °C), appears to measure approximately 5 x 12 x 15 inches (13 x 30 x 38 cm). You can watch a video of the Climashield insulation lofting back after release from the shrink wrap here. It is an impressive example of insulation resilience and can be found 19 minutes into the video.

For this test, Ryan Hannigan of RBH Designs created four insulated pillows. Two were constructed with Primaloft Gold 6 osy insulation encased a calendared ripstop nylon. The insulation was quilted to the ripstop nylon. The bottom of one pillow was covered with Vaprthrm vapor barrier material. The other two pillows were constructed similarly using Climashield Apex 6 osy insulation. The insulation was secured at the perimeter of the pillows, not quilted to the fabric.

Our approach to laundering differed a bit from that employed by Phillip Gibson. In his test, other items were included in the washing and drying cycles to simulate added force introduced by laundering with other garments. Our wash cycles included only the four pillows. This may have reduced the stress on the test samples relative to the Gibson method. However, it is probably more representative of the conditions that would be used for home laundering.

For the wash cycles, a front-loading washer and dryer were used, so no agitator was present for the test. The washing machine was set to a “normal” cycle, cold water, and “normal” spin dry. No detergent was used. The dryer was set for a “normal” cycle with moderate heat. The drying cycle was ended automatically by the dryer. After drying was completed, the samples sat at room temperature for at least one hour. The thermal resistance of each sample was again measured using the permeation kettles and thermal imager.

This test procedure was repeated 10 times. Thermal resistance for each pillow was measured after each wash/dry cycle.

Home › Forums › By The Numbers: How Bad is Thermal Degradation in Synthetic Insulation?