You are here: Home / Articles / Why I Walk 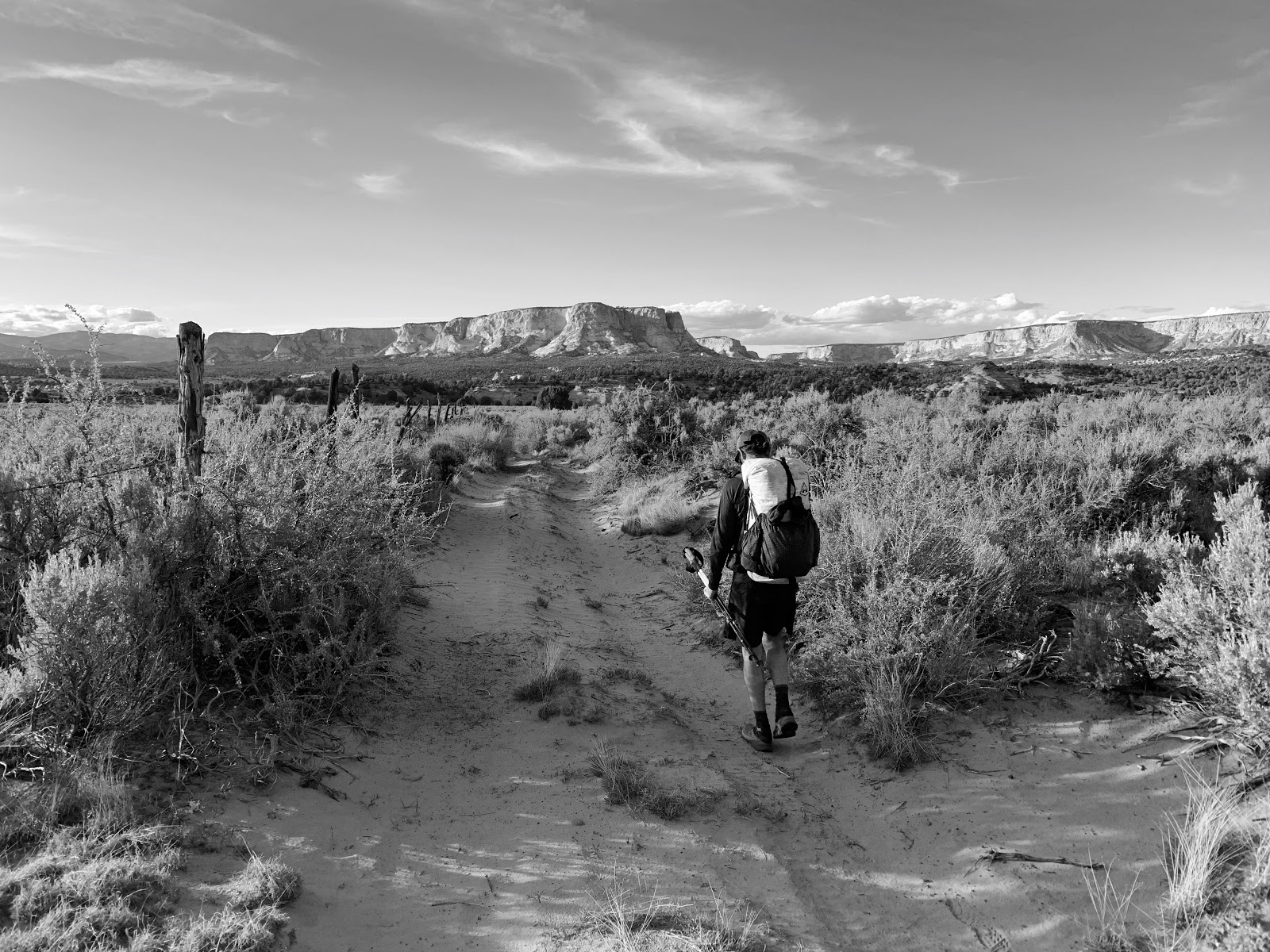 I pull my truck into a packed trailhead across the street from the Hogle Zoo in Salt Lake City, park, and again look at my phone. I check my messages, scroll briefly through Instagram again, and then turn it off and tuck it under the seat. It’s four-thirty in the afternoon and I’m feeling a sleepiness only caffeine, napping, or walking can fix. English tea time. Spanish siesta. Utah amble.

Phoneless, I exit the vehicle, check the doors, pocket the keys, and step slowly up a dry, rocky trail between scrub oak. I do this, or something like it almost every day—a ceremony of leaving everything behind except for my body and mind. But a part of me always protests. A part of me could keep working, checking messages and email perpetually, but it’s the slipperiness of this inclination that I don’t trust and which I have to make an effort to resist. So, I walk.

As my heart starts pumping and my breath becomes more labored, all the things I’ve been avoiding rush through me along with my quickened blood. The problem I’ve been unable to solve. The interpersonal interactions that could have been better. What I could have said, what I still can say, what I should have done, what I still can do. Planning, anger, rumination, grief. Those first thirty minutes are allocated for feeling these things. And then things (usually) quiet down. This is why I walk.

One foot falls in front of the other, falls in front of the other, falls in front of the other. The warm May sunlight and cool breeze together land on my skin, replacing some rumination over which I have no control. The burning in my calves as the trail steepens replaces the desire to finish a project that will be on hold for at least as long as I commit to walking through the hills. Buds are starting to emerge from the gamble oak, and the big yellow flowers of the arrowleaf balsamroot spring from the nothing of winter and carpet the round hills. The rhythm of my lungs filling and emptying, my heart beating, and the cadence of my feet produce what Rebecca Solnit in her book Wanderlust calls “a delicate balance between working and idling, being and doing. It is a bodily experience that produces nothing but thoughts, experiences, arrivals.”

But, while idling seems to replace working, and being seems to replace doing, I’m inadvertently becoming more productive as an internal sorting occurs. And not arbitrarily productive. Thoughts rinse through the rain of walking, sorting in the sieve of walking, and when the dust runs from them as mud and the gravel refuse falls on that tailing pile of ruminations, and the water falls away, I look down to find gems sitting there clear, shining, obvious. I’m giving myself the space to find what really matters.

Why is walking so effective in this regard, and for how long has it had this function?

There doesn’t seem to be much consensus on when or why early hominids started walking upright. The Savannah-based Theory points to a shift from forest to grasslands in Africa, a result of climate change, and the need for apes to stand up and see over the tall grass. Others say standing upright kept us cooler, with the sun striking less of our body as we scurried between trees. The (possibly sexist) provisioning model says that bipedalism was a result of the male being sent out to get food and bringing it back in his arms, becoming the sole provider for an essentially immobile female. Other theories suggest that walking upright is simply more efficient than moving on all fours, a theory that finds some favor in Prescott, Arizona’s Man Against Horse Race, where Nick Coury outran a horse over the course of 50 miles (80 kilometers) in 2019. The idea is that when we started hunting big game, one of the first methods was to simply run after them until they wore out. When we caught up to them, we used our newly-freed hands to bash them to death with some sort of club. Brutal. But also sensible.

In any case, biomechanical changes took place. The pelvis became more like a bowl. The out-turned legs shifted inwards and under the pelvis. The legs became longer. The spine obtained a curve to support the upright structure. The butt developed, allowing us to run. And of course, the hands were freed up to manipulate things. Tools could be made, carried, brandished. And then humans set out from Africa on foot, traveling out of curiosity, necessity, or maybe just because we could. Maybe just to see what’s around the next bend, over the next horizon, eventually spreading out to populate every corner of the Earth.

At some point, walking became more than its origins, developing into a cultural activity of simultaneous walking and thinking. Looking specifically at Europe, the Greek philosophers famously walked as they thought and thought as they walked. Rousseau, in the mid-1700s, was one of the first to promote walking as the ideal state of being. Man, he believed, reached his fullest potential “wandering in the forests, without industry… with no need of his fellow-men, likewise with no desire to harm them.” The walker was outside of society, in nature, relying on their own strength.

William Wordsworth supposedly walked about 180,000 miles (290,000 kilometers) in his life on his nobbly legs. According to Solnit, he “made walking central to his life and art to a degree almost unparalleled before or since.” His walking seems pretty similar to the type of walking I and people reading this article also engage with, a sort of backpacking, so it seems. In his early twenties, he set off on a 2,000-mile (~3,200 km) walk. Of course, I wonder if he used some sort of canvas rucksack, what he carried in it, where he slept, how he dealt with weather.

The pace of life today, the perpetual notifications popping up on ever-present screens threaten to hide experience from us. Memories and needs remain trapped in that unmined ore of unexamined life. Rousseau and Wordsworth would agree that backpacking pushes back against this fast-moving world. It urges us to slow down. As Solnit says, the mind probably works at the same pace as the feet, three miles per hour. Backpacking puts us back in that rhythm for extended periods of time. That’s probably why so many of us feel like every trip is a reset. Some of us need to hit that button more often than others. I need short daily resets, phoneless, and typically alone. But I need longer ones too, at least once a month—some quick overnighters in the mountains or deserts within a few hours’ drive of my home. And I know some people need even longer ones and so embark on the PCT, the AT, the AZT, the CDT. Some of us would prefer to linger in that place where the mind’s pace matches that of the feet, and nothing threatens to break that linked cadence.

There are other reasons for walking, too. Cheryl Strayed is interviewed on an episode of the Design Matters Podcast, saying “what happens on the outside, one foot in front of the other in front of the other, also happens on the inside.” She says that the body becomes the teacher, and the rest of us learns from it. When she hiked the PCT, she revisited every single moment of her life. The pain, the joy, all of it. It allowed her to emerge at the end as a person willing and capable and confident to reenter the world, something she would have had a hard time accessing otherwise. Walking allowed this.

Walking is exploratory, walking is an escape, walking is exercise. We also walk to offer respect for timeframes we can’t perceive. We follow geological divisions like the Continental Divide Trail which splits the continent between water that drains into the Pacific Ocean from water that drains into the Gulf of Mexico. Or for comradery. To be one of many on national scenic trails like the AT and PCT. To proudly say “I did it too!” We also walk to trace old paths so that the act itself functions as a sort of ambulatory memory. Robert MacFarlane, for example, in his book The Old Ways, follows the Icknield Way, one of the oldest paths in the UK, possibly up to 6,000 years old. And Craig Childs, in his book House of Rain follows ghosts of the Ancestral Puebloans across the southwest.

Some also walk to imagine potential. John Davis’s Trek West expedition endeavored to imagine landscape connectivity from Mexico to the Yukon where animals once freely roamed, and could do so again. In 2019, I followed an individual mule deer from winter to summer ranges to see what I could learn from intelligences other than my own. It wasn’t a premier wilderness experience as I crossed highways and climbed over barbed wire fences, but it was a walk full of meaning, and it made me want to do more like it.

After nearly an hour ambling through the foothills above Salt Lake City, I start to make my descent to the car. The densest thoughts crack and break apart and fall away like dried mud from a shoe, leaving me with new clarity. In fact, I need to take some notes before I forget everything I just learned without trying to learn anything at all. So I pick up my pace. The rhythm of the body, the lungs, heart, become the teacher and teach me something I wouldn’t have known had I not gone on my daily walk.

Why do you walk?