You are here: Home / Articles / Backpackers Should be Amateur Naturalists

Backpackers Should be Amateur Naturalists

Ben Kilbourne explores the need for backpackers to be amateur naturalists in our effort to steward our natural environment. 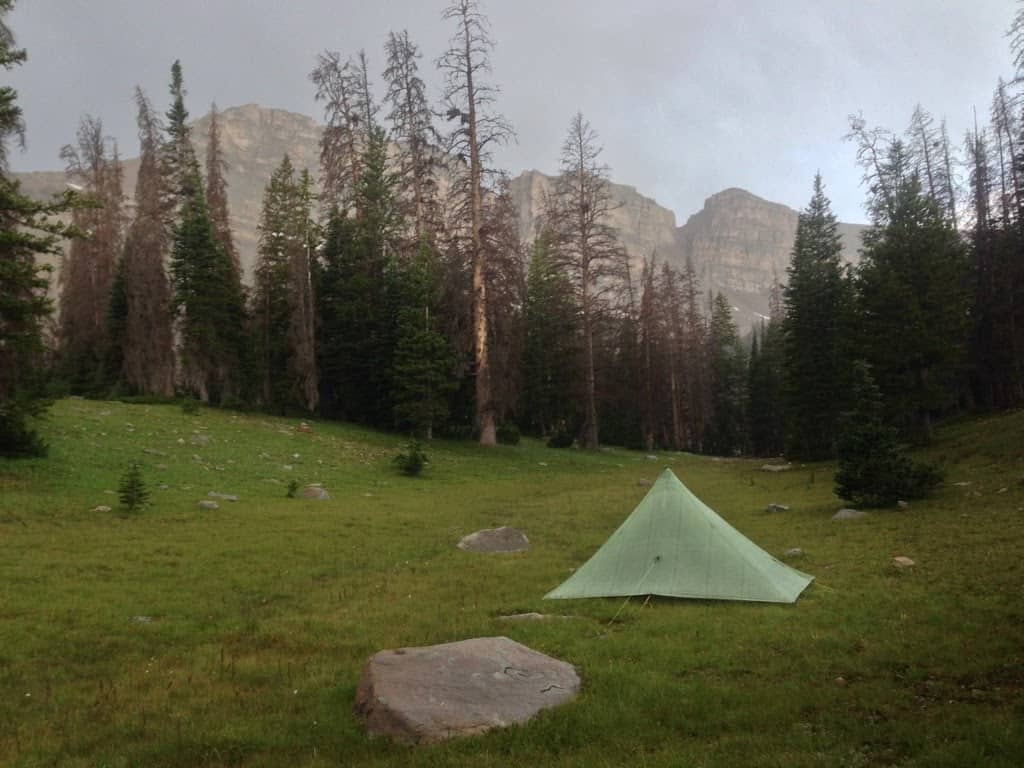 Out of my backpack, I pulled the small nylon sack that contained my tarp and began scanning the meadow for a flat place. My pack fell over and my pot and stove spilled out. I walked away from the mess toward a mostly flat, mostly rockless patch of meadow. Perfect. I pulled the tarp out of the sack and draped the rectangle over the grass and the tiny white and purple flowers. Before I pounded in a single stake I noticed a dead lodgepole about 50 feet (15 meters) away and 60 feet (18 meters) tall. Halfway up the tree split into a schoolmarm, one side bare and the other side impossibly supporting a mess of dead branches. The whole thing leaned generally in my direction. This spot will not do. I gathered the tarp and continued the search.

Rags of snow lay in strips through the scree at the south end of the lake. Great cliffs encircled the basin, their definition subdued by the now-permanent summer smoke. Water cascaded into the lake somewhere on the far side, though I couldn’t quite tell where. Chris, my hiking partner, already had his tent set up, a dead army of trees leaning in every direction on all sides of him. Am I paranoid? Chris has clearly considered the statistics and decided it very unlikely that one of these trees will fall tonight. But aren’t those statistics changing every day as beetles kill more and more trees in the Uintas? The outcome less and less in our favor?

After sighting the fall direction of every tree within a quarter mile I settled on a spot. It was imperfect. There were lodgepole ghosts still in my vicinity but they mostly threatened to find permanent repose on top of other future campers. Not me. Not tonight.

At the trailhead a photo was posted of this very basin, looking nothing like the graveyard I now gazed out upon. The photo showed a lush mountain of green trees with no beetle kill at all. The photo was from the 1980s when this problem was still in its infancy and I was glad they had not updated it. Using a photo of today’s ghost-forest would have the potential to reify disease in these mountains. Dead trees could come to be seen as the way things are. This photo and the death immediately behind it struck me as an image crucial to solving ecological crises in the places we love. The photo, like the memories of people who have been backpacking here for decades, has the potential to imagine the Uintas in its past healthy state, the result of which is the imagination of a future state of forest health as well. As backpackers, our ability to observe changes in the places we love is critical to finding a path to ecosystem intactness in spite of the ravages of climate change.

Those of us who have been walking around for a long time will be able to tell you that the Uintas were not always like this, that one never had to worry about a beetle-killed tree falling on them in the middle of the night. So, what has changed? William deBuys, in his book A Great Aridness, says that the onset of higher temperatures due to anthropogenic climate change favors the beetles. Because summers are getting longer and winters are getting shorter, the beetles begin reproducing earlier and continue later into the season. With extra time for reproduction, greater numbers of beetles will make it to winter. If winter isn’t cold enough to knock them back, an even greater number will begin reproduction again the following summer. If temperatures continue to go up this cycle will continue. In British Columbia alone, the mountain pine beetle has killed over 33 million acres of lodgepole, but it’s not the only culprit; the piñion Ips beetle and Spruce beetle also threaten to decimate our forests. And in Colorado, it is expected that pretty much all of their lodgepole forests—about 5 million acres—will succumb eventually.

This bark beetle predicament struck me first as a purely aesthetic issue—likely a common reaction among recreationists. The mood of the Uintas went from somber to apocalyptic. The trees forced to stand for many years after death become their own tombstones, and the whole range becomes a graveyard. But I walk among them regardless, and enjoy doing so, for my personal needs are not to be stopped by a tree cemetery. I often claim and do so with passion, that I need wild places for my own wellbeing. Sometimes there is a city-born sorrow that accumulates in one’s bones and becomes heavy. Sometimes only walking can break its gout-like crystallization and disperse with it.

The dispersal of this accumulation often drives our desire to protect all the wild that remains, but it should not be the only reason. The possibility of being squashed by a dead lodgepole woke me up to other, more dire reasons for us to care about wild places. A tree falling on me would very literally be the former intact ecosystem retaliating on the human in response to anthropogenic climate change. It becomes symbolic of other, greater revenge that the relative ecological intactness of the Holocene may seek as a result of its disruption.

I think this consideration can urge backpackers to think more critically about what we are trying to protect when we say we want to protect wild places. For while humans could be considered to be natural, we are currently very bad members of the natural community. We are like the band who, after refusing to attend other bands’ shows, wonders why it is so hard to book a gig. If we refuse to be a member of the ecological community should we really be surprised if it retaliates eventually with disease, poverty, and ugliness? As I walk through the beetle kill of the Uintas my trip becomes about more than recreation. I experience sorrow in the manifestation of the ghost of Holocene balance retaliating with disease. I wonder what, if anything, I can do.

The first step, promoted by Wendell Berry, Aldo Leopold, Ellen Meloy, and Robin Wall Kimmerer, is to become amateur naturalists. And who is better suited to this task than we backpackers? Our observations are invaluable to maintaining ecosystem health. We know what places have looked like in the past, and we know how they have changed. We know when the desert bighorns stop frequenting their favorite lookouts, and this observation should fill us with concern. We are reminded that:

To have a place, to live and belong in a place, to live from a place without destroying it, we must imagine it. By imagination we see it illuminated by its own unique character and by our love for it. By imagination, we recognize with sympathy all the fellow members, the neighbors with whom we share the world. As imagination enables sympathy, sympathy enables affection. And it is in affection that we find the possibility of a neighborly, kind, and conserving economy. – Wendell Berry

While it is worthwhile to experience wild places for our own wellbeing, this experience can come to have more depth. We, through deep observation of our backpacking destinations, develop affection for them. And through this affection, we begin to develop the ability to imagine these places in both states of health and states of catastrophe. This imagination has great potential for conservation.

After a rainy dinner, the sun found a tunnel through the gloom and lit the tops of the

mountain. The red looked unreal against the dark sky and red and gold raindrops fell into the lake. When I laid down to sleep I thought briefly of the dead trees around us, but only briefly, and then fell asleep because the issue was officially out of my control. In the night a deer visited me. I awoke to her nose snorting loudly about three inches from my forehead. I twitched violently and she ran off. Since I was awake I used the opportunity to get out of the tarp and pee. I walked to the edge of the meadow and in the blackness, many glowing eyes met the light from my headlamp. I wondered what invisible threads run between the dying lodgepole and these deer. I wondered what the mountain would be without them. It would still be a mountain, but how would it feel without deer? And then I remembered that there is a feeling I have never had in the Uintas and likely never will; that of the presence of the grizzly bear. The complexity of the invisible threads that tethered bear to deer to lodgepole and on and on and on was too much for my drowsy, oxygen-deprived brain. I would have to think about that in the morning. But I laid there for a long time thinking about the absence of the grizzly, how its absence is the ghost whose poltergeist hauntings are likely occurring all around me, but which I am unable to perceive as such due to my ignorance of this place’s character 150 years ago. Come back, grizzly, it might be the only way to know how things have changed.