You are here: Home / Articles / The Overlook: Othering in the Outdoors

The Overlook: Othering in the Outdoors

BPL columnist Ben Kilbourne was on a trail run when he suddenly found himself in a mask-related confrontation. What happened next got him thinking. 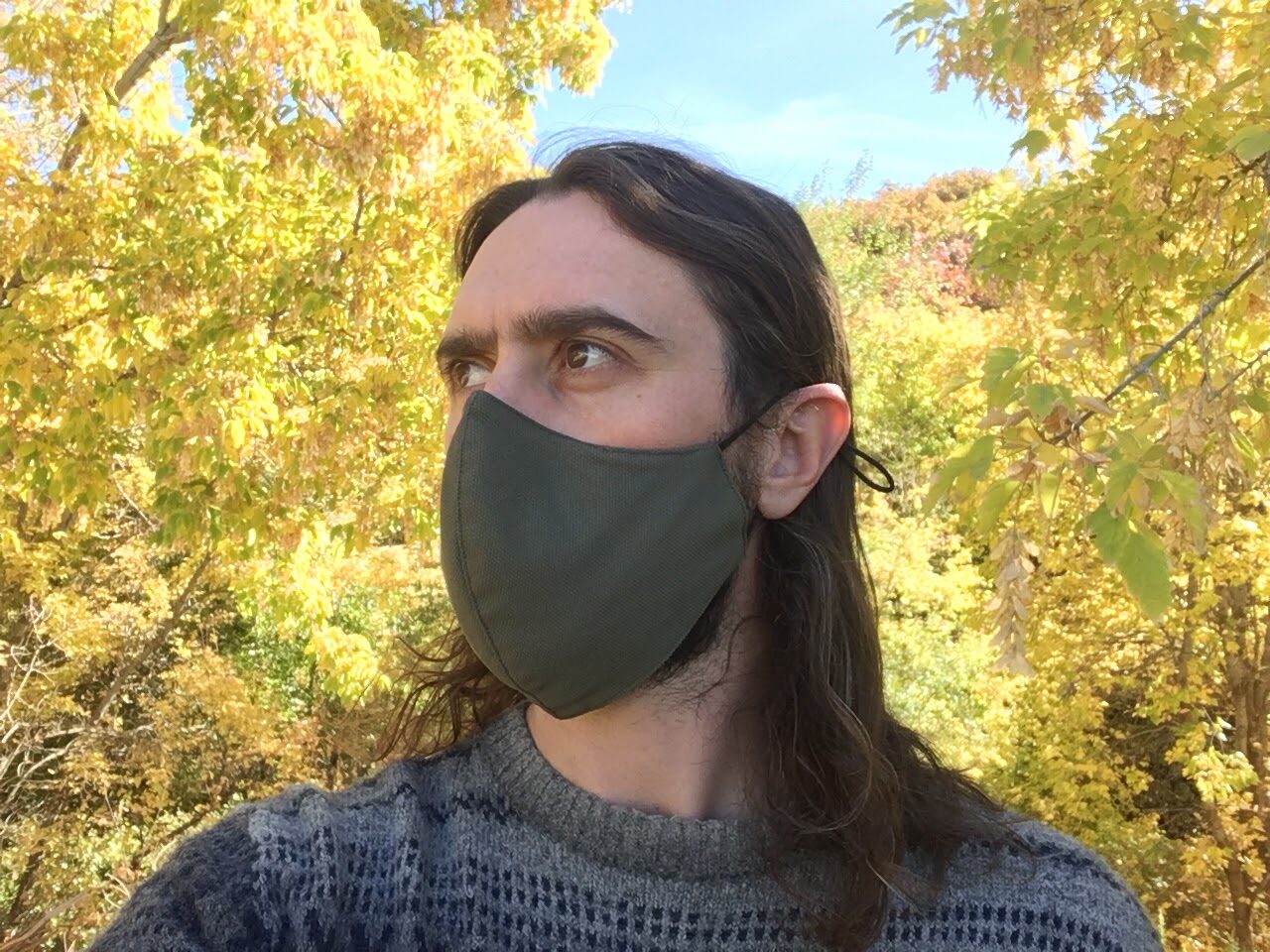 After a long workday, I closed the computer, switched from jeans to running clothes, drove up Big Cottonwood Canyon just outside of Salt Lake City, and parked on the side of the road behind a long string of cars. On a Friday afternoon, hordes of people had the same idea as me: get some exercise in the woods. It’s a common pastime for Salt Lakers of all kinds, an activity with no apparent common denominator. The Wasatch Range is a place where different people are brought together through a shared love of the outdoors.

Huge family groups speaking a variety of languages were headed up the trail that forked to the left to Lake Blanche and Sundial Peak. Dads and moms with towering overnight backpacks toted along kids with small packs, toys, water bottles, or nothing at all. While I felt happy to be sharing with them the experience of getting outside at the end of the week, I didn’t want to compete for the trail, so I went right on the Broad’s Fork Trail. The sharp daytime call of the northern flicker issued through the woods as I joined my neighbors in the comradery of leaving the workweek behind. We all needed it and deserved it.

Hiking these days, I carry a mask with me but it often stays on my wrist. Knowing that the coronavirus passes as tiny particles through the air and that the danger is greatest when people are in close proximity, I only pull it over my mouth and nose and secure the straps behind my ears if I find myself on a narrow trail where an oncoming hiker and I will be forced to pass each other within only a foot or so. This closeness is oftentimes inevitable, so I come prepared.

Only ten minutes on the trail and I found myself headed towards a hiker on a trail bounded on either side by thick, impenetrable brush. It was one of those times where we’d have to essentially brush shoulders. I took the mask off my wrist and put it on. I casually said, “Hi” to the man and stepped past him and was about to continue on up the trail when he stopped and said loudly, “You’ve got to be kidding me.”

I stopped and turned. “What’s that?” I asked.

I paused and looked at him. He looked like other hikers I would typically pass on the trail—unnoteworthy. He wore hiking boots, cargo shorts, and carried a daypack. Nothing about him distinguished him from anyone else with whom I shared the trail that day, save for the face below the brim of his baseball cap, which was strained, red, and utterly livid.

“You’re angry,” I said, and I pulled the mask down around my chin and removed my sunglasses so I could see him better. At that moment, I only felt capable of stating the obvious.

I stood staring. I knew I was experiencing something special, something unique to 2020 America. My senses became heightened. I didn’t want to miss anything.

The man continued to shout at me about how he could never have the coronavirus because he was in such good shape for a 55-year-old. How I shouldn’t be scared of him because he just climbed a mountain; all the obvious rebuttals flashed through my brain, but I stayed silent. I knew that if I said the mask was to protect him more than me he wouldn’t hear me. If I said I wasn’t harming him by wearing a mask he wouldn’t hear me. If I said that while I didn’t really even know how much I was protecting either of us, but that I chose the better-safe-than-sorry option, and that it was no skin off my back to do so, he wouldn’t hear me.

I felt like I was trapped with a troll on a Facebook or Twitter post. But this social media interaction was somehow playing out below a canopy of spruce and fir instead of inside a screen. It felt sacrilegious. Having ample experience with Facebook, I knew he expected me to sling judgments right back at him and how it would go if I did so. I would be confirming his judgments. The threat my existence apparently posed to him would be validated. “I knew it!” he would exclaim, gleefully vindicated in his rage. Instead, I listened as he continued to yell at me.

Then things escalated without any provocation at all; I was still just staring and listening when he took a few steps towards me, balled his hands into fists, and shrieked, “If I hit you, maybe you’ll get the virus!” I reached for my phone, wishing at that moment I had been filming the whole thing. He stopped within five feet of me and took a few steps back.

“You seem to know a lot about me. What else can you tell me about myself?” I asked.

“You’re a f***ing Mormon!” he barked with certainty.

That response was totally unexpected. I had given him no information about myself at all, and he created a complete narrative regardless. He turned and started down the trail, and the repeated accusations that I was “a f***ing Mormon, f***ing liberal, or f***ing hippie” echoed through the forest even after he was out of sight.

When he was gone, I looked down at my feet, scanning my body, trying to see what he saw. I was wearing navy blue running shoes, turquoise shorts, a blue, quarter-zip running jersey, and a black running vest. I wore a short beard, my long hair was tied up in a bun, and I had on a tattered, salt-stained, short-brimmed hat. The entire narrative he built was founded on this image. I guess this is what a liberal, hippie, Mormon looks like, I thought. I had no idea.

What I did know was that what he saw in me was otherness. The person he saw standing before him embodied ideas that ran counter to his ideas about the reality of the world. The act of wearing a mask is objectively nonthreatening, but it signified something that was threatening to him. It represented an otherness that prevented us from being united by the mountains and the joy of exercising in the woods on a Friday afternoon.

The act of othering places division where there really is none. It’s an arbitrary and fundamentally dishonest attempt to divide the common destinies of humanity. I might go so far as to say it’s a form of gaslighting when he tells me I am different from him. I just don’t buy it. I can’t buy it. In fact, it’s my duty as a member of humanity, a citizen of the Earth, not to buy it. Martin Luther King Jr. once said, “We are caught in an inescapable network of mutuality, tied in a single garment of destiny. Whatever affects one directly, affects all indirectly.”

Somehow, we managed to forget this despite being surrounded by the great outdoors, the Earth which is home to all of us. The trees towering over us and the flicker’s call which echoed between them so clearly displayed that inescapable network of mutuality, our shared belonging to nature, but we didn’t notice.

Moving slowly up the trail, I wondered what we should do to remember our shared belonging during this strange time. I know the United States appears more divided than ever, but if you take a moment to look, we really are united by our shared dreams and desires. The man and I, and those parents at the trailhead, all want the freedom to drive from our homes, throw a pack on our backs, and head out into the woods. Surely, we want our children and their children to have this experience as well. In retrospect, all I wish is that I could have shared this sentiment with him before we parted ways.

A few minutes later, I crested a false summit, and could see the great metamorphic mass of Dromedary Peak through the trees. The sky above it was perfectly blue and cloudless. Two men—one with a mask and one without—were headed my way, so I stepped off the trail to let them go by. As we passed each other, we exchanged cordial, brief salutations, and went our own ways in the same forest.

Home › Forums › The Overlook: Othering in the Outdoors