You are here: Home / Articles / Lunar Eclipse at Craters of the Moon National Monument

Lunar Eclipse at Craters of the Moon National Monument 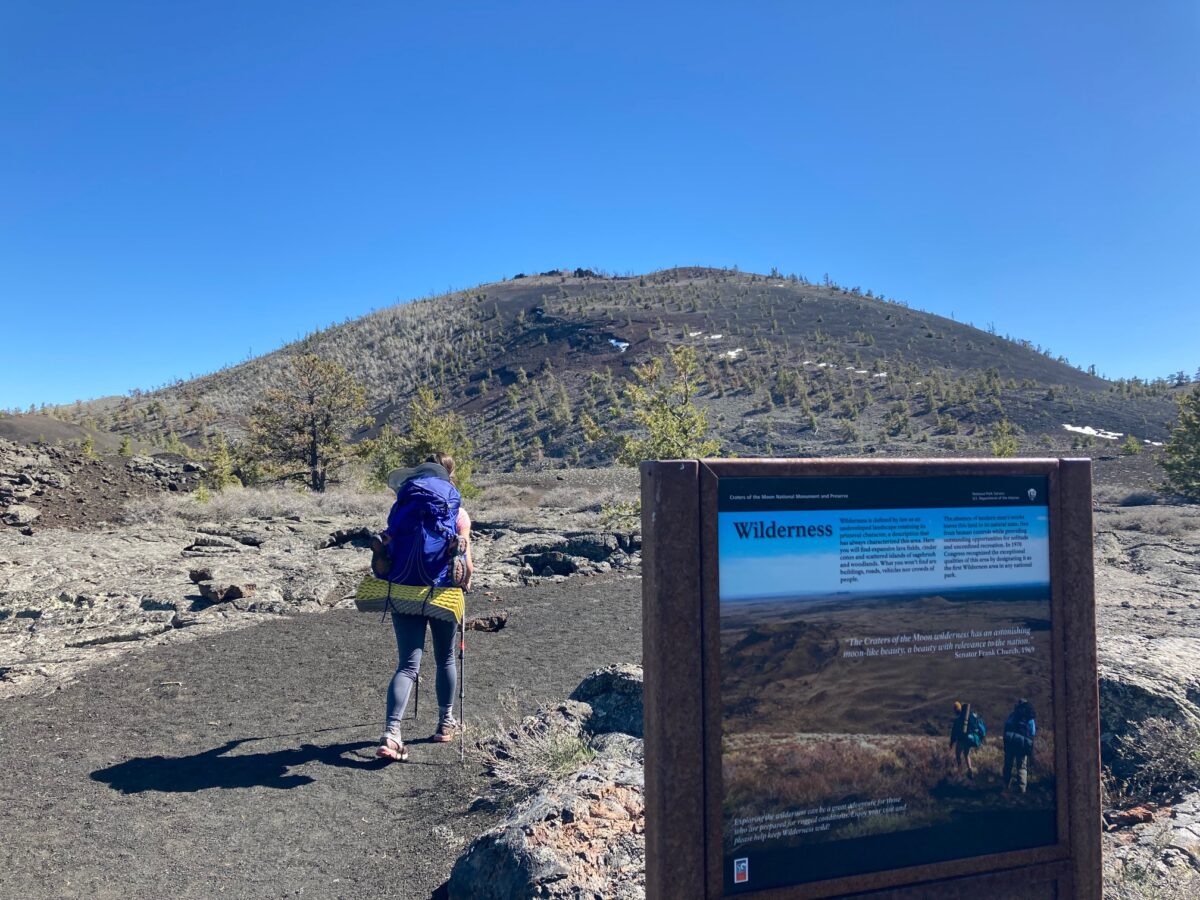 Other than a thin sliver of Yellowstone National Park, Idaho doesn’t have any national parks proper despite having an abundance of outrageously beautiful landscapes. Instead, Idaho’s public lands are state parks, designated Wilderness areas, Wild and Scenic rivers, or vast swaths of National Forest or BLM high desert.

While many of these fall into the usual categories of majestic mountains, whitewater rivers, or dense forests, there is one landscape – Craters of the Moon National Monument – that is unlike anywhere else I’ve ever backpacked. For a short shoulder-season trip, it’s an ideal destination.

I’ve never felt like I needed an excuse or permission to revisit an area. So when my girlfriend and I realized on our first visit to Craters of the Moon last year that there would be a lunar eclipse the following May (and on her birthday, no less), we knew we had to plan a trip around it.

Idaho also has some of the darkest skies in the continental United States, especially so at Craters of the Moon. The opportunity to experience a lunar eclipse in a designated dark sky park, in a surreal landscape with moon-like features, was just too perfect.

From my house in Montana’s Bitterroot Valley, the 263-mile drive to Craters of the Moon has exactly three stop lights.

The route passes by Idaho’s tallest peak and the stark and intimidating Lost River Range. But more alluringly to a hot springs enthusiast like myself, it passes by several hot springs. One of my favorite of these is a small pool between the highway and the river – a perfect roadside pit stop. I can think of few better ways to break up a drive on a backpacking trip than by a soak in a beautiful river canyon.

Just as the Lost River Range begins to fade away over the horizon, those wishing to visit Craters of the Moon head west. Before long, what looks to be fairly typical high desert fields turn into lava flats, and the vastness of the landscape becomes visceral. When exploring the trails in the National Monument, that feeling reaches new heights.

The brutal climate of Craters of the Moon – hot, dry, windy summers and bitterly cold and windy winters – means that the window for backpacking there is mostly confined to spring and fall. Given that there is no reliable surface water in the areas of the monument most attractive to backpacking, it’s not surprising that few backpackers visit Craters of the Moon. It’s far from most other attractions in Idaho, and the state has no shortage of world-class backpacking trips.

Lacking the recreation pressure that can only be managed by reservation systems and quotas, Craters of the Moon only requires a free permit that can be picked up at the visitor center by backpackers wishing to spend the night in the 43,243-acre wilderness.

The land managers recommend visitors camp in Echo Crater to limit the impact on the landscape by concentrating use. Reached by an approximately four-mile hike, with the last stretch of that cross-country through sagebrush plains, the crater makes for one of the most incredible campsites I’ve ever stayed at.

After meandering through the sagebrush, you reach the lower rim of the crater and then descend into it to reach two distinct camping areas. You’re mercifully out of the worst of the winds that whip across the lava fields in the craters, and the lowermost campsite is tucked into a charming grove of limber pine.

Cliffs tower above, with colorful lichen contrasting the more drab colors that define the crater’s interior. Exiting the crater provides those camped there with the novel sensation of hiking out of a basement to reach the ground level of the lava fields. But perhaps the most lovely thing about camping at Echo Crater is walking along the rim of the crater, peering down at your campsite and out to distant mountain ranges and the scattered craters and cinder cones and buttes of the monument. You can walk all the way around the rim if you chose (and why wouldn’t you?).

Knowing the terrific view that the crater’s rim afforded, Andrea and I decided that witnessing the lunar eclipse – a Super Flower Blood Moon, to be precise – from that vantage point would be a sublime backcountry experience. And apparently, we were alone in that estimation because on the evening of Sunday, May 15th, we had the crater to ourselves. The ranger who issued our permit told us we were the only backpackers camped in the entire National Monument that night.

Although some cloud cover had drifted into the region, and it would briefly rain on us during the night, our view to the southeast, where the moon would rise, was completely unobstructed. We enjoyed our dinner and brewed up some tea to sip on while we waited for the main event when the moon would pass into the earth’s shadow.

Looking out over the lava fields and towards another crater, we saw the moon rise, and then a subtle smudge appear on its bottom. We monitored the progress with binoculars and marveled at the detail we could see on the moon as the eclipse slowly began to take place. The amount of ambient light made the event all the more enjoyable, as the soft green of spring was present in the sparse vegetation, the tiny rocks in the crater had a deep red tint to them, and the blues of the sky added a calming tone to it all.

Once the moon was entirely within the earth’s shadow, we looked at it again with binoculars and were astounded to see just how close the stars appeared to the moon itself. The usual light of the full moon washes these out, but during the eclipse, we could see and appreciate these stars, marveling at the fact that they’re always there but just not visible.

This experience was one of the most incredible I’ve ever had as a backpacker – a lunar eclipse is amazing enough; pairing it with an otherworldly landscape took it to another level. When planning my trips, I try to target complementary seasons for the landscapes (i.e., not visiting Death Valley in August), but this was my first real foray into planning for celestial events.

It certainly won’t be my last.