You are here: Home / Articles / Unpacked: Rewards of Repetition

Greek philosophy says you can't step in the same river twice, but what about backpacking the same trail? 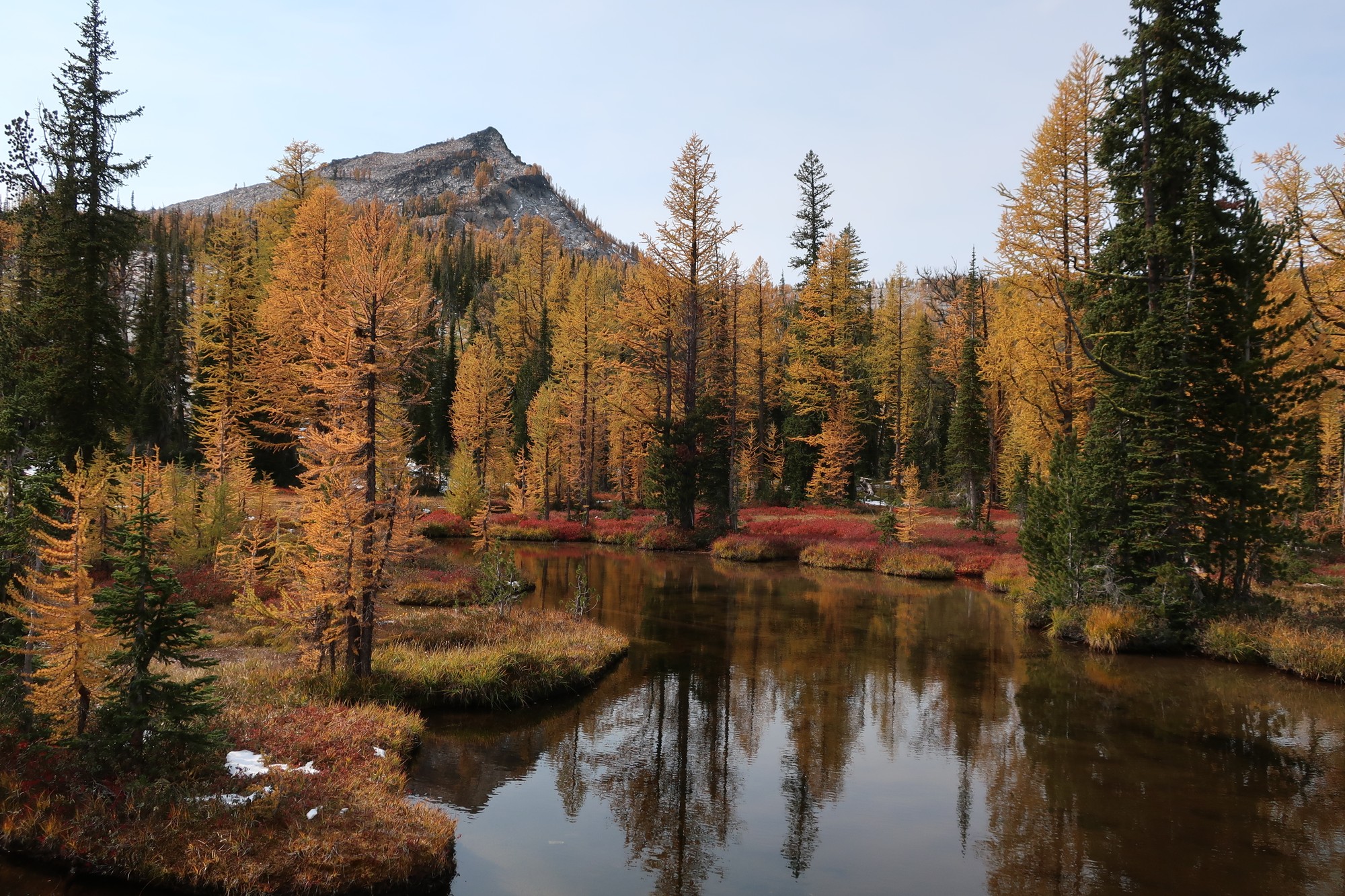 Tent or tarp? Quilt or sleeping bag? Down puffy or synthetic puffy?

These questions of equipment tend to vex backpackers and often lead to lengthy discussions. After the fourth or fifth time reading these discussions (or, against my better judgment, actually participating in them) I’ve found that they’re almost painfully boring. I’ve found that the question of which experience to have – hiking a new trail or returning to an old favorite – is a much more interesting quandary to reflect upon. Thinking about how to use the limited time we have to spend in undeveloped landscapes is much more fulfilling than simply pondering another product to buy.

I’m an incorrigible Returner. Although I did venture to a handful of new places in 2020, I found myself returning to no less than a dozen trails I’d previously backpacked on. In one particularly odd instance, I hiked up to a subalpine basin filled with golden larch for an overnight trip with my friend Doug. I then returned the next day with my girlfriend, Andrea, to share the majestic experience with her on a separate overnight trip. I felt a bit self-conscious that the squirrels might notice me and say to each other, “This guy, again?”

Some of my repetition is borne of convenience. For one subalpine lake that I visited twice last year, once in August and once in October, the total time spent in transit – both hiking and driving – was just over two hours one-way from my house. With scenery and solitude (both times I had the lake to myself) that easy to obtain, and with my schedule sometimes more crunched than I’d like it to be, it makes perfect sense to go for the low-hanging, but exceedingly delicious, fruit rather than drive further and hike longer just to see a new place – then frustratingly have less time to spend there.

For another lake which I visited for the third time in five years, I was aiming to settle some unfinished business. My previous visits had all been when the lake was still too iced-up to provide good fishing. So I timed my third visit when I knew it would be melted out and I’d finally get a fair shake at matching wits with the “thriving cutthroat fishery” that the guidebook mentioned was present in its waters. I succeeded and caught some nice fish. Since snow wasn’t an issue, I was able to loop back cross-country and pass through a basin filled with lovely tarns and magnificent mountain views.

Other places draw me back because I find the familiarity to be deeply, almost primally, comforting. I recognize rocks, pools of water, and tiny pocket meadows and feel an affinity with them in a way that just isn’t possible when passing by them for the first time. Certain vistas, like the one from an abandoned fire lookout where I’ve spent over 20 nights the last few years, seem to allow me to gaze not just at the landscape but back at life itself as I contemplate the subtle – or drastic – seasonal changes before me and compare them with years past.

When going on a trip with other backpackers whose levels of expertise and ability differ from mine, I find that traipsing along on trails that I’m already familiar with offers a sense of comfort for all of us. I know the alternate campsites that we can stop at if we don’t reach the intended destination. I know which artificial flies usually guarantee strikes from hungry trout in mid-September. I know which shortcuts to take if we need to bail out on a trip early. It takes a bit of the stress of the unknown out of the trip which, if you’re just out there to relax in a beautiful place with friends who you don’t see nearly enough, is a lovely way to spend time. And it is almost always more enjoyable than frequently poring over a map and looking confusedly at junctions and worrying about making the miles to the next campsite.

As self-righteous as I might be about the benefits of revisiting old hikes and haunts, I must admit that I find myself inspired by those who constantly seek out new trails and spots on the map. My friend Doug is one of them. As an avid backpacker and the author of numerous guidebooks to hiking in the Pacific Northwest, Doug has hiked tens of thousands of miles – but he rarely hikes in the same place twice. His reasoning is simple – life’s short and he’d rather see new places than spend his time going back to places he’s already seen.

That’s a hard position to argue with, and while I agree in theory, I rarely seem to let it be my guiding principle when deciding where to go. I’ve never regretted going somewhere new instead of returning to an old favorite – but I’ve also never regretted the reverse of that either.

Humans tend to crave novelty and relish in the sense of experiencing the unknown or finally seeing in person the places we’ve read about online or seen in guidebooks. We are also undeniably creatures of habit. I’ve been lucky enough to have a life where I’ve been able to make backpacking a habit, not just a hobby I can only indulge in once or twice a year due to logistical, domestic, or financial barriers, and I suppose this habit is part of what leads me to return to the same places again and again.

However, there’s also a virtue in breaking, or at least bending, habits and expanding one’s horizons. There’s a wisdom in moderation, including when it applies to repetition. I’m planning to make a concerted effort to visit some new destinations in 2021, although I’ve also already got a handful of repeat trips on the calendar.

I’ve found the notion from Heraclitus that “you cannot step in the same river twice” rings true. Despite it being the same place, the experience is always different. Updated for the modern backpacker, it might be rephrased as “you can’t camp at the same lake twice.”