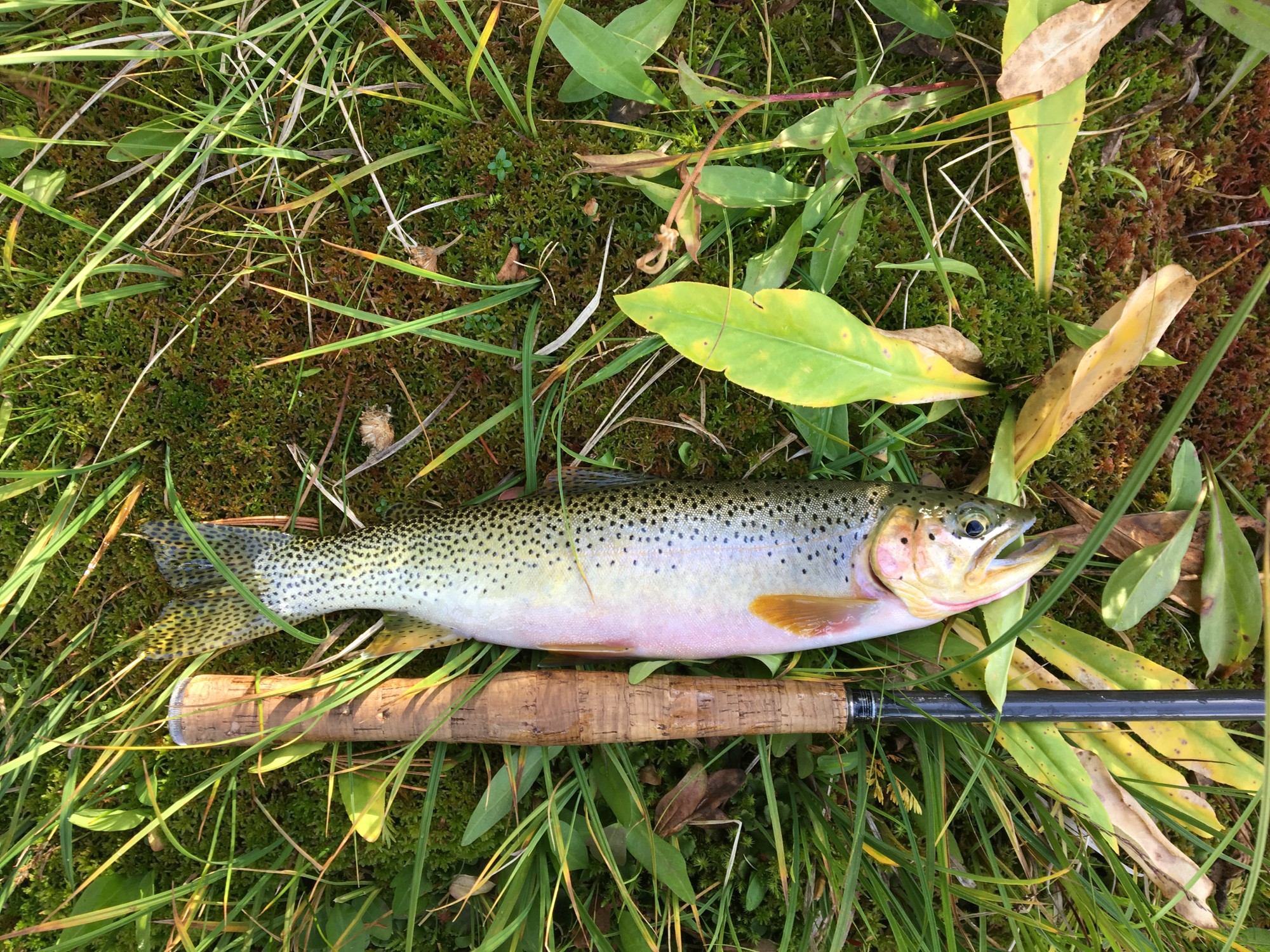 Figuring out the best backcountry fishing system can be an intimidating process with an inordinate amount of choices and pieces of gear to sift through. The purpose of this article is to offer the reader one way to simplify it with a minimalist, tenkara fishing kit.

Although I am certainly not an expert angler, I am reasonably well-versed in the intersection of lightweight backpacking in the Northern Rockies and catching trout in mountain lakes. I’ve fished several dozen lakes and over a dozen small streams and rivers in the Northern Rockies and the Pacific Northwest and almost always found success – sometimes just barely and sometimes spectacularly – using a tenkara fishing system. Tenkara is a traditional method of flyfishing as practiced in Japan that is noticeable for its simplicity.

As adapted for backpacking, this method uses only a collapsible (telescoping) rod, short line, tippet, and a fly (we’ll explain these terms further down in the article). There’s no reel and no multi-section rod and eyelets to thread line through, just the basics needed to catch fish. This minimalist approach not only allows me to keep my fishing kit to well under 8 oz (227 g), but it allows me to have a fly on the water in less than a minute after removing the rod from my pack. There have been several times where I’ve landed a fish before my companions even got their traditional fly rods set up for the first cast.

The simplicity also lends itself well to sharing the experience with others and getting people to try fishing for the first time. In just a few minutes, I’ve shown people who’ve never fly fished how to make simple casts and achieve a passable presentation of the fly, then watched them catch small but eager trout within a few casts.

On a philosophical level, the lack of gear to manage and master allows for a much more focused – and for me, a more fulfilling – experience.

Although I purchased my first tenkara rod in 2011 for use on streams and rivers in eastern Kentucky, it wasn’t until after I moved to Montana in 2014 that I became an avid backcountry angler.

My tenkara experience is primarily with backcountry lakes in Montana that contain trout – cutthroat (both Yellowstone and Westslope), rainbow, and brook. Some of these populations are self-sustaining and others are stocked. I’ve also fished small streams and rivers in the region. I’ve used tenkara on streams and rivers in Wyoming and Washington, as well as at several lakes in Washington. Despite my use being limited to the Northern Rockies and Pacific Northwest, this article is applicable to any backpacker who finds themselves hiking in areas with mountain lakes that have trout – California, Oregon, Utah, Idaho, Colorado, Nevada, and New Mexico all come quickly to mind.

As noted in the introduction, my intent is not to provide a comprehensive overview of tenkara as a supplement or substitution for traditional fly rod systems. Rather, I am simply providing information and observations about my experiences using it as my sole fishing system for backcountry lakes. It is my opinion that for most backpackers this system is preferable – or should at least receive ample consideration – due to its affordability, minimal weight, and ease of operation.

My experience is limited to the products produced by Tenkara USA, which was the first company to make lightweight, telescoping tenkara-style rods available in the United States. However, the observations and experiences should be more or less transferable to other tenkara-style products by other manufacturers.

I’ve used the Tenkara USA Iwana and the Tenkara USA Hane rods, both of which are incredibly light at 2.7 oz (77 g) and 3.5 oz (100 g) respectively. The Iwana is currently sold in a 12-foot long version, but my earlier generation rod is closer to 11 feet. The Iwana is sold as an all-around rod (not too long, not too short, not too stiff, not too flimsy) and is my favorite to use. The cork handle feels nicer in my hand than the handle of the Hane, although both are comfortable to hold for long periods of time. A minor drawback of the Iwana is that it doesn’t collapse as small as the Hane – 20.5 in (52 cm) versus 15 in (38 cm). However, it is 0.8 ounces (23 grams) lighter.

Although I find the Iwana to be a bit more fun and responsive, I would most likely recommend that backpackers who are new to tenkara go with the Hane. Its packability and length make it a bit more user-friendly to start with. Both rods are priced similarly, with the Iwana at $170 and the Hane at $160.

Editor’s Note: The Tenkara USA Hane originated as a collaboration between Ryan Jordan (Backpacking Light’s founder) and Daniel Galhardo (Tenkara USA’s founder) in 2010, and was sold exclusively to Backpacking Light Members. Ryan wanted a rod that was shorter, stiffer, more compact, and more durable than other tenkara rods – in other words, a rod designed for the backpacker. The Hane was recently brought back to market by Tenkara USA and it remains one of our favorite all-time models of tenkara rods from any brand.

In well over two hundred fishing days between these two rods, and having landed several hundred fish, I’ve yet to notice any significant wear or durability issues. The telescoping extension of the rod is intuitive, but the thinnest segments are fragile. There are plenty of stories of people breaking a tip while telescoping a rod.

I watched a clumsy friend do this within a few days of having his first rod, so it’s advisable to read the instructions carefully and watch a few videos on the extensions/collapsing process to make sure you don’t damage your rod. On the bright side, Tenkara USA is noted for exceptional customer service and a lifetime warranty on defects in its products. Issues caused by user error can almost always be replaced economically by purchasing individual rod sections.

Each rod comes with a protective case to use when transporting the rod. At first, I used the case when backpacking out of an abundance of caution. Now I just pack the rod inside my pack or in a side pocket and secure it snugly against the pack with compression straps. I’ve had no issues with damage to the rod on roughly two dozen trips using this approach.

There are two types of lines most commonly used with tenkara rods – a traditional (tapered) line and a level (untapered) line. I’ve used both and prefer the traditional line, mostly because it is the easiest to attach to the rod and connect a piece of tippet to (the tippet is a very fine piece of line that connects the primary line to the fly). Tapered lines are also easier to cast.

While a traditional fly rod system would provide me with more distance, I’ve rarely found that being able to cast 50 ft (15 m) makes or breaks my day of fishing. I can usually just walk around the lake to a place where the fish are feeding closer to shore or wait until they move in as the time of day changes.

I mix the neuroticism of traditional “match the hatch” fly fishing (with its abundance of flies for every occasion) with the minimalist focus of tenkara and usually have 5-6 patterns with me when fishing (totaling around 25 flies). Royal Wulffs, Caddises, Adams, Blue Winged Olives, and Ants are always in my fly box. With a few variations among these, mostly just in color and size, I’m nearly always able to have a successful day of fishing if the trout are feeding on the surface (i.e. hitting “dry flies”).

I’ve yet to experiment with using nymphs to fish below the surface of the lake, but I know of some who have made this work with a tenkara system.

A net makes it easier to land fish and allows them to be handled and released more gently. The lightest ones are made of carbon fiber and clear rubber, but in proportion to the rest of the fishing system they have significant weight. I most often leave the net at home, especially if fishing is a secondary part of my trip.

I typically bring a net when returning to lakes where I have caught large trout and can use the help with landing them. If you don’t plan to use a net, please read up on the best ways to practice catch-and-release to minimize impact to the fish. If you’re planning to eat the fish you catch, then having a net would be useful in preventing dinner from getting away.

I use a Tenkara USA Strap Pack and their line holders to keep things organized. Tenkara USA sells a specialized nipper tool that is certainly useful, but in true ultralight fashion I just use the fingernail clippers I keep in my first aid kit to clip the tag end of my knots down.

A small fly box is useful as well. Models as minimal or elaborate as you desire are available. I typically take around 25 flies total that are a mix of the four to five patterns that have proven most successful over the years, and hope for the best.

Casting a tenkara rod is remarkably intuitive. Tenkara USA rods come with basic instructions, and their website has a lot of great instructional resources as well. Take some time to learn to cast correctly.

Knots are as important a part of the technique as the casting, in my experience. There’s almost nothing worse than having a fish get away because your knots were poorly tied.

Fortunately, tenkara knots are also minimal – I only use two. One to connect the tippet to the line and another to connect the fly to the tippet. These are covered in the instruction booklet that comes with a Tenkara USA rod and are also covered online in various videos and tutorials.

Landing a trout with a tenkara set up can be oddly confusing and intimidating for those used to fishing with a reel. Having to pull the line in by hand feels a bit more intimate than using a mechanical advantage (a reel) to bridge the gap. I play the fish as little as possible before beginning to pull the line in. There are helpful tutorials on the best way to land fish on the Tenkara USA website.

Tenkara fly fishing allows me to catch almost as many fish with 50% less equipment compared to western-style fly fishing. And some days, I outperform the western fly rod systems used by my companions.

But regardless of how many fish I catch, the fact is that I am catching them quicker and spending more time fishing and less time fiddling with gear. My gear also weighs a fraction of that of a traditional fly rod system and is much more portable, allowing me to fish lake chains without having to disassemble my system or worry about snagging my rod as I change locations.

If you already have lots of experience as an angler, a tenkara system will be a useful tool in your toolbox. However, you’ll likely be more prone to recognizing its limitations (which despite my near-fanatical endorsement of tenkara, do exist). If you’re new to fishing backcountry lakes and small wilderness streams and rivers, a tenkara system is an ideal way to start.

It’s relatively inexpensive, typically hassle-free, adds minimal weight, and can provide hours of enjoyment trying to catch trout at the lakes you pass by or camp at during backcountry outings. The learning curve is fairly gentle and in many cases, trout at mountain lakes can be much easier to catch than those in rivers or streams.