You are here: Home / Science & Technology / Testing & Research / Is a heat exchanger pot worth the weight?
Enjoy this free preview of Members-only content.
Login or Subscribe to see it all.

The big question with heat-exchanger (HX) pots is whether the much-vaunted improvements in gas efficiency are worth the extra weight of the pot. That is, given some weight saving in gas, how many litres of water must you boil to compensate for the heavier pot? This article attempts to answer that question using a test apparatus that I built myself to ensure accurate, real-time data collection.

Some time ago Backpacking Light Member Dan Y bought some very inexpensive HX hard-anodised aluminium (HAA) pots from eBay, and sent a couple of them out for review. (I was one recipient: thank you Dan.) 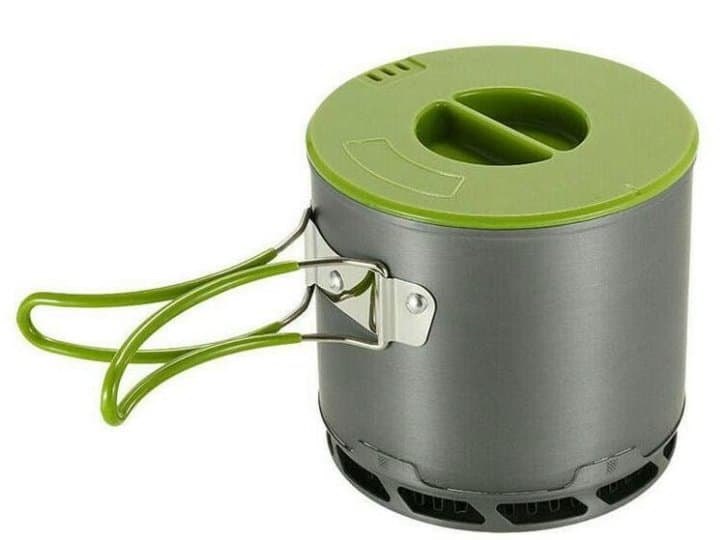 The cheap eBay HX pot used in this test.

I love measuring things, so I decided to resurrect the electronic measurement system I had used for my series on Carbon Monoxide Testing of Stoves. This allowed me to measure several data streams at once under laboratory conditions: water temperature, canister weight, and some other temperatures. I could then test several different pots under different conditions. For this, I used a new experimental remote invertible canister stove (V4) which I was working on at the time. More on that another day.

The test rig in all its glory is here: from left to right stove, canister on load cell, electronics, data logger.

I could of course just used a stopwatch for the time and some scales to weigh the gas canister before and after the event, but I prefer to see what is going on during the process. The sort of results obtained are shown further on.

The Titan pots are the ones I use in the field on longer trips. I use an aluminum Trangia kettle for morning tea on day walks.

There were two different variables here (apart from the pots themselves):

I used Primus Winter gas or Power gas for these tests: apparently the same gas but different coloured canisters. We explored the marketing claims about winter gas already.

The canister was left upright for all the testing. This would have the inevitable effect of varying slowly the ratio of propane to butane from test run to test run, but since the gas consumption was low and the room temperature was >20 C, I did not think this was very significant. The gases do have fairly similar energy content by weight anyhow (mainly from the number of carbon atoms per molecule).

Keeping the flame power the same between test runs is always difficult. I solved this (at least partially) by leaving the stove control valve mostly untouched between test runs and used the safety valve at the other end of the hose to turn the gas on and off. This was only moderately successful as it did not handle testing over a couple of weeks.

I calibrated the load cell before each test run by adding a laboratory-grade 50 g mass to the canister and looking at the difference.

I calibrated the temperature sensor using cold water measured with a laboratory-grade glass thermometer for the low end and boiling water for the high end. You can't use 'hot' water for this as the steam coming off the water means it is steadily cooling down, but 'cold' water is reasonably stable.

It was interesting to note that it was possible to record a temperature a small fraction of a degree above the boiling point (100 C) when the pot was boiling vigorously. This was a real effect, due to the bubbles of steam which sometimes enveloped the temperature probe: that steam was definitely just above 100 C. Cutting off the gas dropped the recorded temperature back to 100 C quite smartly before it started a slow decay, confirming this diagnosis.

The data logging was done with a LabJack T7 Pro logger with the LabJack software (thank you Toby and Christie at LabJack). The device and software run beautifully. It was hooked up to a PC running Windows 7 and the data was analysed using Microsoft Excel 2007.Each pot was covered by the same flat steel lid (visible above in the photo of the test apparatus) to prevent loss of steam and consequent cooling. It is well-known that a very low flame with no lid could mean your pot might reach (say) 90 C and never get any hotter. That is one reason why tiny stoves (eg candle stoves) do not work in the field: not enough power. Please note that a 'real' lid would more or less seal the top of the pot, but the lid used here has a slot on it for the temperature probe and the shaft of the stirrer. Some heat loss might be expected through this slot, and cooling measurements show this does in fact happen. This is one limitation of the whole experiment.

Login as a Premium or Unlimited Member to read the results:

Member's only version is 2,890 words and includes 11 photographs and/or illustrations/charts.