You are here: Home / Articles / Unpacked: “Free Outside” by Jeff Garmire Book Review 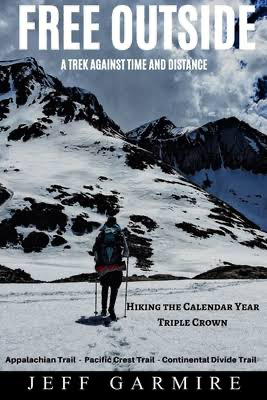 Unpacked is a new column from Backpacking Light by outdoor writer, gear tester, and librarian Mark Wetherington. It ranges from book reviews to essays on outdoor ethics and culture. There’s a richness in backpacking that’s rarely reflected in gear reviews and trip reports – this column aims to explore the deeper essence of our hobby with an insightful (and sometimes humorous) approach.

Free Outside by Jeff Garmire

Jeff Garmire is undoubtedly one of the most impressive long-distance hikers to have ever laced up a pair of trail runners. In addition to setting Fastest Known Time records (FKTs) on the Arizona Trail, Long Trail, Pinhoti Trail, and — most recently — the unsupported FKT of the Colorado Trail, he completed a Calendar Year Triple Crown in 2016. Hiking the Appalachian, Pacific Crest, and Continental Divide Trails in one year is a remarkable physical and mental accomplishment, and “Free Outside” is Garmire’s account of the experience.

After a brief overview of Garmire’s resignation from his job in Denver and pre-trip preparations, we join him at the start of the journey at the southern terminus of the Appalachian Trail. As the miles fly by, the narrative continues in a simple, linear form. The emotional and physical challenges are noted but never discussed in great detail. This keeps the book moving along at an entertaining pace, but also leaves one wanting more details on the profundity of certain experiences or the depths of strength and stamina required.

The book takes account of several recurring themes, such as kindness, generosity, and the beauty of nature, but none are examined in a way that allows the reader to really have meaningful insight into how powerful they must have felt. That said, writing about the human condition and the transcendental impact of immersion in nature is no easy task, and keeping the book focused on the play-by-play and day-to-day is beneficial in the way that it focuses the attention as much as possible on what it is actually like to hike 8,000 miles (12,875 km) in a single year.

The Pros and Cons of Simplicity

From winter storms and bone-chilling temperatures to unnerving wildlife encounters and brushes with dehydration, there aren’t many dull moments in this book. Even the descriptions of fairly routine sections of the trail leave one awe-struck when considering their place in the context of the overall achievement and the demanding daily mileages, typically between thirty and forty miles (48 to 64 km).

Logistics, resupplies and notes about people encountered also feature prominently in the text. The small world of thru-hiking is noted when Garmire runs into those from trails he’s hiked previously or that have another connection to him. After Garmire, food is probably the most prominent character in the book. There were certain times where it seemed like the book was about eating as much as it was about hiking, which makes sense when considering that fueling such an epic undertaking is not something one is able to do on an empty stomach. Although, in many instances, as part of a strategic and often successful approach to minimize weight, Garmire does run almost or completely out of food before reaching his next resupply.

Since the reader already knows the outcome — there’s no mystery or plot to develop — the simplicity of the writing style becomes more of a hindrance than an asset. The book is divided into short to medium-length chapters, but there is no paragraph spacing to further break up the chapters into sections.

The lack of photos is also a downside to the book. There are basic maps of the trails, a cover photo, and a thumbnail photo on the back cover but no other illustrations or photographs. On page 224, Garmire mentions taking a photo that he considers to be one of his best, and it would have been great to see that photo and others in the book to break up the text.

Like many self-published books, “Free Outside” appears to have spent minimal time in the hands of an editor. On the book’s back cover, Great Smoky Mountains National Park is referred to as “Smokey Mountain National Park,” which was an unforced factual error that an editor would’ve easily caught. The William O. Douglas Wilderness is misnamed as the David O. Douglas Wilderness during the description of the PCT hike, and other typos are not uncommon. These and other minor errors don’t ruin the narrative by any means, but they do detract from the readability in places. It was also a bit odd that after being provided with minimal background or personal details, the reader finds out on page 171 (out of 257 pages) that the Calendar Year Triple Crown attempt is an effort to raise money for suicide prevention. No substantial discussion of this topic or the money raised occurs later in the book. It just fades into the background of the story, which, given its importance, was a bit odd.

Garmire’s successful completion of a Calendar Year Triple Crown is an amazing story and “Free Outside” tells that story, but from a literary standpoint, it doesn’t tell it particularly well. This book is worth reading if you have an intense interest in the endurance-adventure genre. Still, for casual readers who backpack, it likely won’t be as entertaining as “Thirst” by Heather “Anish” Anderson or other recent books in the long-trails canon.