You are here: Home / Articles / The Overlook: Frozen Tracks – Monument Restoration and the Fate of the Upper Paria

The Overlook: Frozen Tracks – Monument Restoration and the Fate of the Upper Paria

Ben Kilbourne follows tracks in the Grand Staircase-Escalante National Monument as its fate once again hangs in the balance. 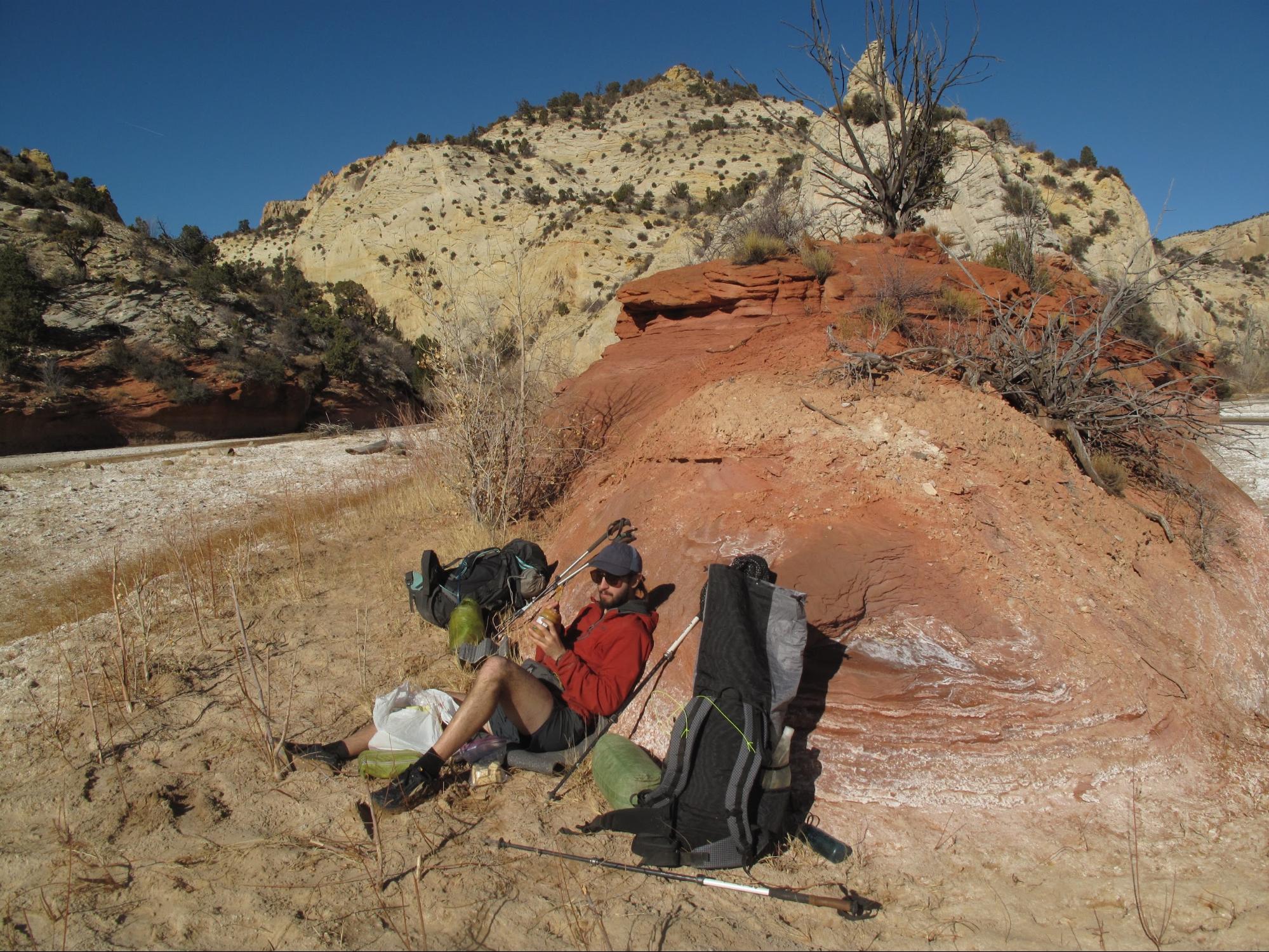 The Grand Staircase-Escalante National Monument was designated in 1996, with its original size encompassing 1,880,461 acres. President Bill Clinton famously signed the proclamation on the South Rim of the Grand Canyon, several miles and a state away from the southern border of the new monument, an act seen by many local Utahns as cowardly, a slap in the face, and more proof that only outsiders wanted this land to hold monument status. A little over 20 years later, Trump pleased these same folks by reducing the size of the monument by about half. Now many who lamented the shrinking—locals and nonlocals alike—are anticipating President Joe Biden’s restoration of the monument to its original size. On his first day, he signed an executive order for the review of the monument boundaries. With all of this in mind, I decided to walk through an area that could be affected by whatever Biden decides to do to see if there was a story inherent in the place itself, one separate from the political division that accounts for most monument discussions.

We were headed for the Upper Paria River Canyon, an area with particularly confusing designations. Decades ago, Wilderness Study Areas (WSAs) were created on either side of the canyon and according to the Southern Utah Wilderness Alliance (SUWA), “The Paria River bed through the proposed wilderness was excluded from the draft recommendation to allow ORV [off-road vehicle] use.” This is because the state and county claim the riverbed is an RS2477 road. These RS2477 roads were created during the Civil War to plot out transportation in the west. Many are unneeded, go nowhere, and create land-use designation nightmares like we’re seeing here. As I was typing away on this paragraph a friend texted me an article saying the U.S. Supreme Court rejected an appeal by the state and county over whether organizations had the right to challenge RS2477s. This means SUWA and others are now officially allowed to fight them.

While it may be the case that ORV use is allowed in the WSA agreement, the 2000 GSENM travel management plan says that the road is closed. Thus, it is shown on most maps as a black line (closed) rather than a red line (open) or blue line (admin only). So, ORV use in the canyon likely doesn’t violate the WSA designation but does violate the 2000 GSENM travel management plan. That said, the 20-year-old travel management plan isn’t really in effect because of the shrinking; the public has been awaiting a new one which simply never happened. Without a new travel management plan, the situation in the Upper Paria has been in limbo. Once Biden restores the old boundaries (nearly a guarantee) it could be two years before we see a new plan. Until then, the canyon may have to fend for itself. I wanted to check it out for myself, and see if all this confusion violated my idea of an aesthetic backpacking destination or a coyote’s idea of a viable home.

Biodiversity in the Upper Paria

My friend Michelle and I rolled up to the trailhead after dark and stepped out of the car into a freezing wind. That night was in the low teens, with a good layer of frost on my bag in the morning. It took what felt like an eternity for the sun to reach us, and we didn’t start walking until late morning. My feet warmed slowly as we ambled down the dirt road. We saw a lone cholla cactus and stopped to admire it. They’re rare this far north, and rareness is always exciting

The Paria River was half frozen, half flowing, all pain-inducing. We paced back and forth along the edge of the shallow water, looking for a way to get through without getting our feet wet, but there was none, and we eventually gave up, plodding reluctantly onto the ice and punching through to ice-cold mud and water below. The brilliant red of the Vermillion Cliffs and the bright blue of the sky vibrated against each other. Either one could have been the closer block of color, either one the further. Michelle’s hair was the same color as the cliffs, a warm pink, a product of a quarter-life-crisis, she had said. I was in the midst of my own third-life-crisis but had nothing to show for it, besides maybe this reckless trip, wearing shorts in 15 F (-9 C) weather. Someone should have told me to stay home. But the warmth and brightness made the land ahead look warm and inviting, and I almost forgot the frigid night prior.

The next morning, I woke early to read in my sleeping bag. After a while, I stood up and shivered. Michelle’s tent was silent and still. She must be getting those morning hours of sleep, often some of the best. The white cliffs at the end of the canyon started to illuminate softly with the light before the dawn light, features pushing into reality. Then without warning the mountain became a castle, suddenly bright gold, like the domes of an exotic city, a place of providence at the end of a cold road. I waited in the cold for providence to reach me when I heard whirring and looked up to see a huge flock of piñon jays whooshing over me like 70 mechanical blue drones on a pre-programmed mission: go to the warmth. Soon another flock appeared over the eastern canyon wall and headed up-canyon toward the golden city where the last had gone. Then a third flock did the same thing. I looked at Michelle’s tent but there was still no movement. She missed it. So this is what happens all winter when I’m tucked warmly in bed or making coffee comfortably in my tropical kitchen.

That day we continued up-canyon observing various tracks in salty sand. There were many human tracks, Vibram sole impressions now encrusted in salt, an odd relic of capitalism in this quiet and wild place. We humans walked single-mindedly up-canyon or down-canyon while deer with unknowable destinations crisscrossed our linear paths. Cows plodded aimlessly here and there. Coyotes, too, meandered through the canyon. One giant print was probably dog’s, and another large print had the characteristic three lobes, tear-dropped shaped pads, and retracted claws of a mountain lion.

Then I saw a print that threw me off. It almost looked human for a second, with toes distinct from the pad—forward-facing, but still too splayed to be human. It slowly came into focus as a black bear print with another much smaller one right beside it. Clearly a mother and her cub walking side by side down the canyon. Eventually, they must have decided enough was enough, there was no food or not the right food, or there was something roaring loudly in the canyon that seemed prudent to avoid, and they turned and went back north towards Bryce Canyon and the Paunsaugunt Plateau.

As we walked, the bear path and the human path crossed and re-crossed. We watched two histories play out before us, intertwined in the residual present. Then they encountered another, the ORV path, or rather it encountered them; time is broken at this scale. Tire tracks ran across all aforementioned tracks and I couldn’t square all of these realities in my mind at once. This seems to be the real issue at hand. Who do we really want using this canyon? Can backpackers, elk, bear families, coyotes, deer, mountain lions, cows, and ORV’s coexist in this corridor? What kind of land use designation would allow this coexistence? Or do some of us need to be excluded so others can thrive?

Remembering the Purpose of GSENM

When Grand Staircase-Escalante was designated, the emphasis or purpose of the monument was to protect archeological, paleontological, geologic, and biological resources for posterity. I honestly can’t say if my presence, cows’ presence, or ORVs’ presence is conducive to this goal. Here I am writing an article from a backpacking perspective about a premier backpacking destination, and yet I feel uncertain about such a promotion. Of course, not all recreation has the same level of impact. The wide footprint and far-reaching decibel roar of ORVs vastly outweigh my meager presence. If we’re talking about science in GSENM—and I think we are—then we should keep things like this in mind.

All I ask is that when the monument is restored, and a new travel management plan is being made, this RS2477 road should remain closed. The Upper Paria is an excellent backpacking destination with wilderness character and abundant wildlife—even in the dead of winter—proving that this is a place with all of the qualities the monument was created to protect. Most importantly, it hosts the biodiversity necessary for climate change resilience. Let us see beyond our recreational desires and remember this.

Michelle and I stopped for lunch where Sheep Creek entered the Paria. It flowed swift and clear over sparkling orange sand, so I topped off a water bottle. Then we dropped our packs on the beach and let the sun warm our feet. They felt like a couple of blocks of frozen parmesan cheese stuck to my ankles, about to crumble under me and leave me face down in the icy water. But then I started to feel my toes. I wiggled them; I still had human feet. The Vermillion Cliffs had been replaced by sandstone that looked like mounds of strawberry and vanilla ice cream. I glanced up-canyon. I could see that soon we would be transitioning out of the ice cream layer into yet another layer of sandstone, the white cliffs that caught the first light that morning.

“This place is incredible,” I said, stating the obvious.

Michelle eyed me with a look that said, “Duh.”

A western bluebird landed in a dead juniper behind us and yelled at us or maybe just the world; it was hard to say. Then another landed, and another. I didn’t know anything about these birds or how they are connected to the larger ecosystem. But I do know that maintaining those connections—whatever they are—is one of the main purposes of the Grand Staircase-Escalante National Monument.

I just hope the (forthcoming, but as yet unconfirmed) Secretary of the Interior, Deb Haaland, keeps this original purpose in mind as she and her team work towards making a decision on the monument.

Home › Forums › The Overlook: Frozen Tracks – Monument Restoration and the Fate of the Upper Paria