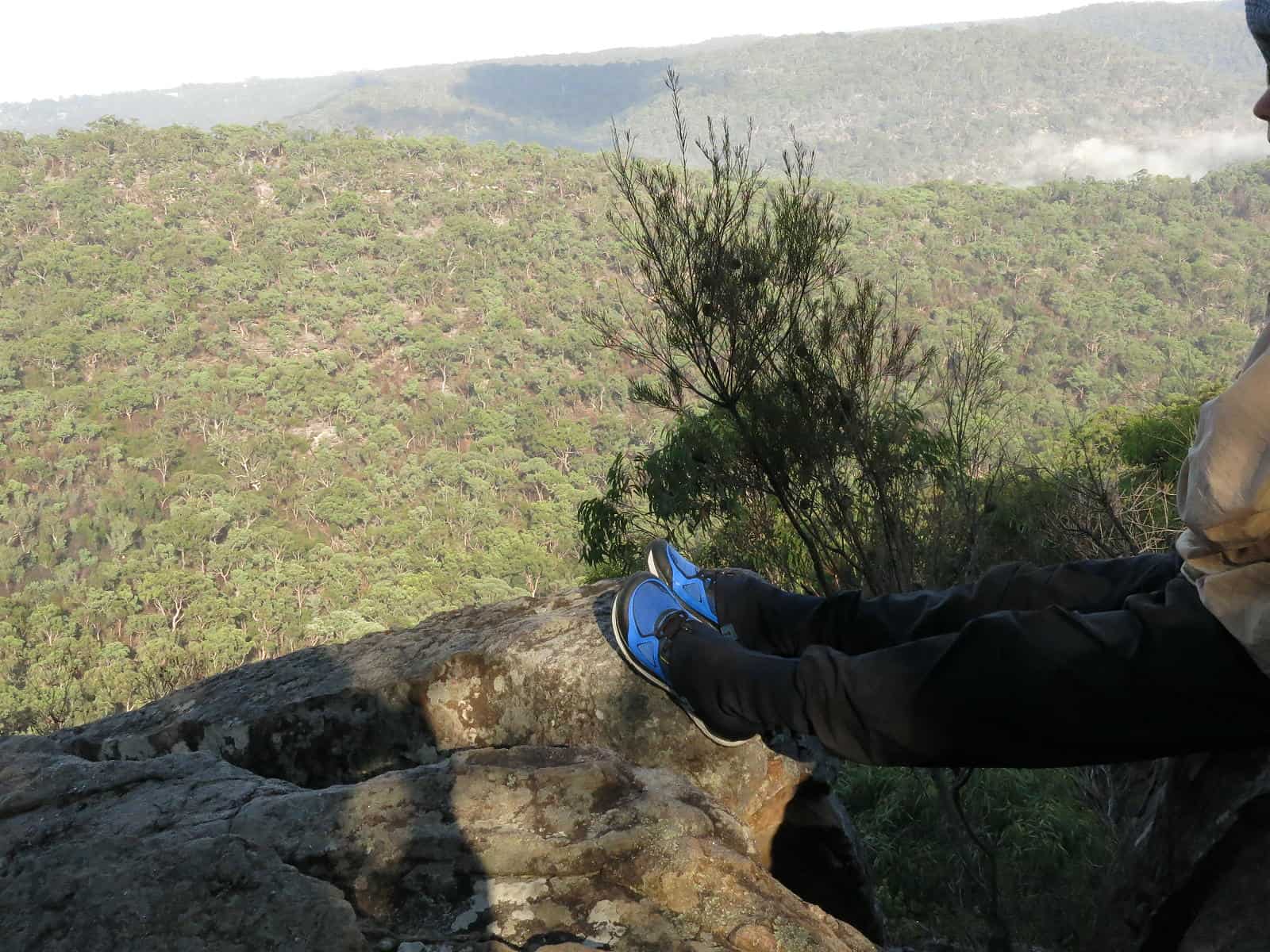 The Topo Athletic Terraventure shoe is advertised as being narrow at the heel but wide at the toe box – this means they do not fit the usual formula for shoe sizing. They only come in one width. Topo Athletic lists these shoes as 4/5 for cushioning, 3/5 for support (1=neutral), and 4/5 for stiffness. They retail for US$110/pair. Topo Athletic sent us two pairs of shoes of size 10.

Here’s a summary of the specs (courtesy Topo Athletic): 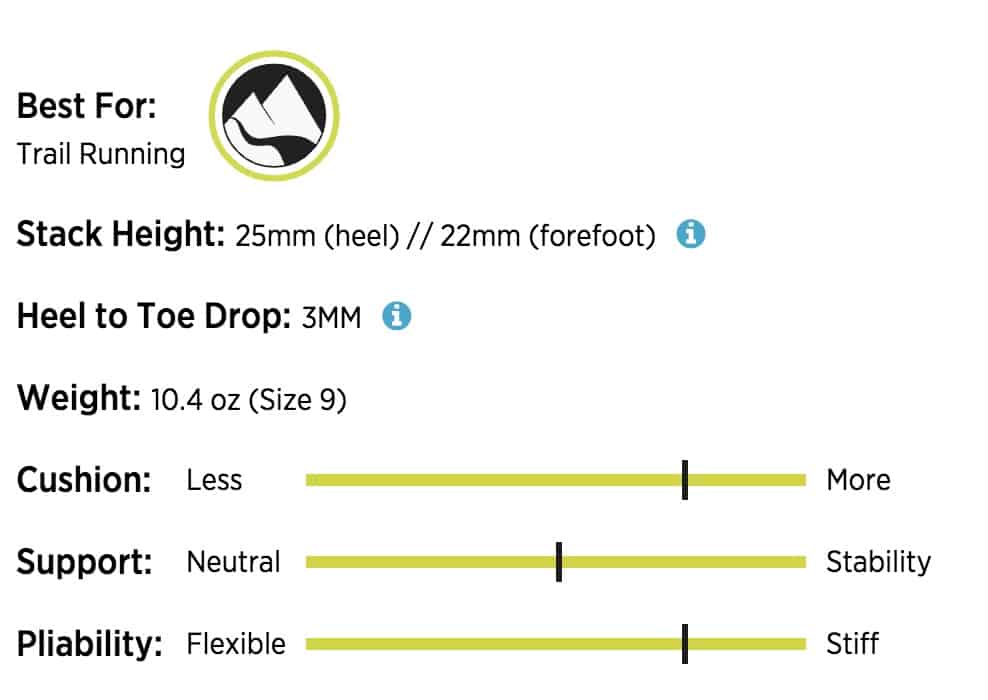 As delivered the new shoes still had that faint manufacturing smell, so we aired them outside for a bit. They came with some funny foot-shaped paper mache inserts to hold their shape. Some brands just stuff the shoe with wadded up butchers paper, others don’t bother. Since the shoes come in a conventional shoebox, I have to wonder whether the inserts are needed.

The soles felt slightly stiff at first, but this is very common. The lacing was in place, up to the top holes but skipping the second top (blue marks in the above photo). The tongue has a lace loop (green marks) through which you thread the laces: that helps keep the tongue from slipping downwards or sideways. The laces were quite long enough and knotted well.

These are trail running shoes, not street running shoes, so they are a bit heavier in construction around the sole. The sole has large lugs which should be OK in mud. Clay might stick, but clay always sticks. The sole felt stiff in torsion, which is good for edging on steep terrain. The rand (obvious in the first photo) is solid so you can kick things without hurting your toes – things like unseen rocks on the track.

The upper has a thick mesh construction for ventilation. This means that water will flow in if you are crossing rivers (and flow out as you walk them dry on the other side!) It also means that dust can get in, although sand not so much as the holes in the mesh are not too large.

The shoe has an almost flat inner sole under a stock removable footbed. There is a very slight contouring in the region of the arch of the foot, but more at the side than underneath. It seemed that there was a noticeable rise under the ball of my foot, but the sole was flat inside. This impression went away after a day or two.

A big claim Topo Athletic makes is that the shoes have narrow heels and a wide toe box. The heel is not all that noticeable, but there are quite cushy heel-retaining lumps (purple markers in the image above) on both sides at top. They were noticeable at first but they faded from consciousness after a short while. However, they do seem to work, preventing my heel from lifting very far.

The tongue has side gussets to help keep dirt and mud out and is adequate in length (it may even be considered long relative to the average trail running shoe, as there is a generous amount of tongue protruding above the top of the lacing). As mentioned, there is a laces loop 1/2 way up (green markers in the image above), which is usually worth using.

The outer uses a fully bonded construction with thin plastic (probably polyurethane) laminated in places to the mesh fabric for reinforcing or decoration. This is lighter than having separate fabric layers or suede sewn on and unlike leather does not shrink when drying out. Apart from the webbing loops used for the laces, there is no other stitching visible on the surface.

Like so many other brands, the shoe size is given with no indication of width, although Topo Athletic claims that the Terraventure has a wide toe box. Well, they do look wide from above – unlike Italian fashion shoes sometimes described as winkle pickers. A very slight drop of ~3 mm from heel to toe is noted. The middle of the shoe (as opposed to the toe region) is not wide – it is meant to hold your foot in place.

Regarding an inquiry about shoe width that I made to Topo Athletic, they replied that “all of our shoes are a standard D, but more towards an E in the forefoot.” This was not encouraging for me, as I normally take a 4E fitting!

Topo Athletic sent us two pairs, both size 10, so both my wife and I did the testing. The first thing both my wife and I noticed was that the shoes are indeed not a 4E in width. This was a problem. However, the toe box is rather more flexible than average. I found that after swapping from our standard thick wool Darn Tough Vermont Boot Socks to thin (nylon) Gobi Wigwam liners, the fit improved a bit. I then changed the lacing to skip one of the lower hole pairs (red markers above) and this also helped. For width reasons I am not sure I would take these on a week-long walk, but they are fine on day walks.

The shoes were delivered with the laces installed to the top holes and skipping the second top. This left my heels feeling a bit loose. While changing the lacing pattern I threaded the laces through both the top holes as well. I usually do this as it seems to make the shoe grip my foot much better. My wife, however, was happy to leave the top holes unused and just use the second top ones.

A subsidiary problem is that my left foot is slightly bigger than my right foot. Some compromise is often needed. In any event, my big toes were a safe distance from the front of the shoe. After some testing, I am left thinking that the shoes may run slightly under-size. That is, perhaps a 10.5 might have been a better fit.

Fast walking on road, track and bush was no problem. Any perceived stiffness in the sole disappeared after the first hour or two. However, I found it essential to leave the shoes laced quite loosely. Are they an E fitting at the front, or possibly a 2E? Either way, the soft mesh sides proved to be fairly conformable.

Going up and down wet and dry sandstone slabs and boulders and along scarp edges showed very good grip on the sole, and a definite lack of twisting. I quickly became quite confident of their grip. Going downhill on very rough terrain was also reliable, including one time when I was perhaps under less control that I should have been (ahem). The soles did work well. Some other reviews say the shoe is responsive: I have no idea what this means as shoes have never responded to me. I think it is marketing gibberish. Nevertheless, it’s generally accepted in the running community that cushioning and responsiveness are mutually exclusive, i.e., a responsive shoe is the opposite of a cushioned shoe somehow.

As far as I have seen, the removable insoles in most joggers are always some type of closed cell foam (CCF). For example, New Balance insoles usually have a cut surface on the bottom face: you can see the cells, and these often hold a little moisture and rather more fine sand. These Topo insoles have a smooth underside (from moulding), and they do not hold water or sand. This seems like a good idea.

However, there is one gotcha to watch out for. The front of the shoe has a heavy rand, as usual, and this curls over onto the top at the front. But the top edge has a significant protrusion on the inside, and the edge of my big toenail did catch on it at times. If you walk with your toes curled up you might have a problem; if you walk with your toes curled down or with nice thick wool socks you will never notice.

Very solid, good grippy sole, and really not that expensive. They lack “features” like arch support, pronation control and gel soles, which is excellent. They depart from the conventional shape, so whether they will suit your feet or not I cannot say – that’s up to your feet. They would be worth trying on though. Just be aware that they may not be suitable for those with very wide feet.

The manufacturer provided complimentary samples of the products in this review with no obligation required to publish a review. Some links in this review may be affiliate links: if you click on a link and place an order with one of our affiliate merchant partners, Backpacking Light receives a small commission on the sale, at no extra cost to you. These commissions help support our website and create new content – and we’re grateful for your support.