How Can Cheap Butane Canisters be Modified to Work With Canister Stoves?

Roger Caffin discusses how you can modify and use cheap butane canisters with canister stoves in this MYOG article. 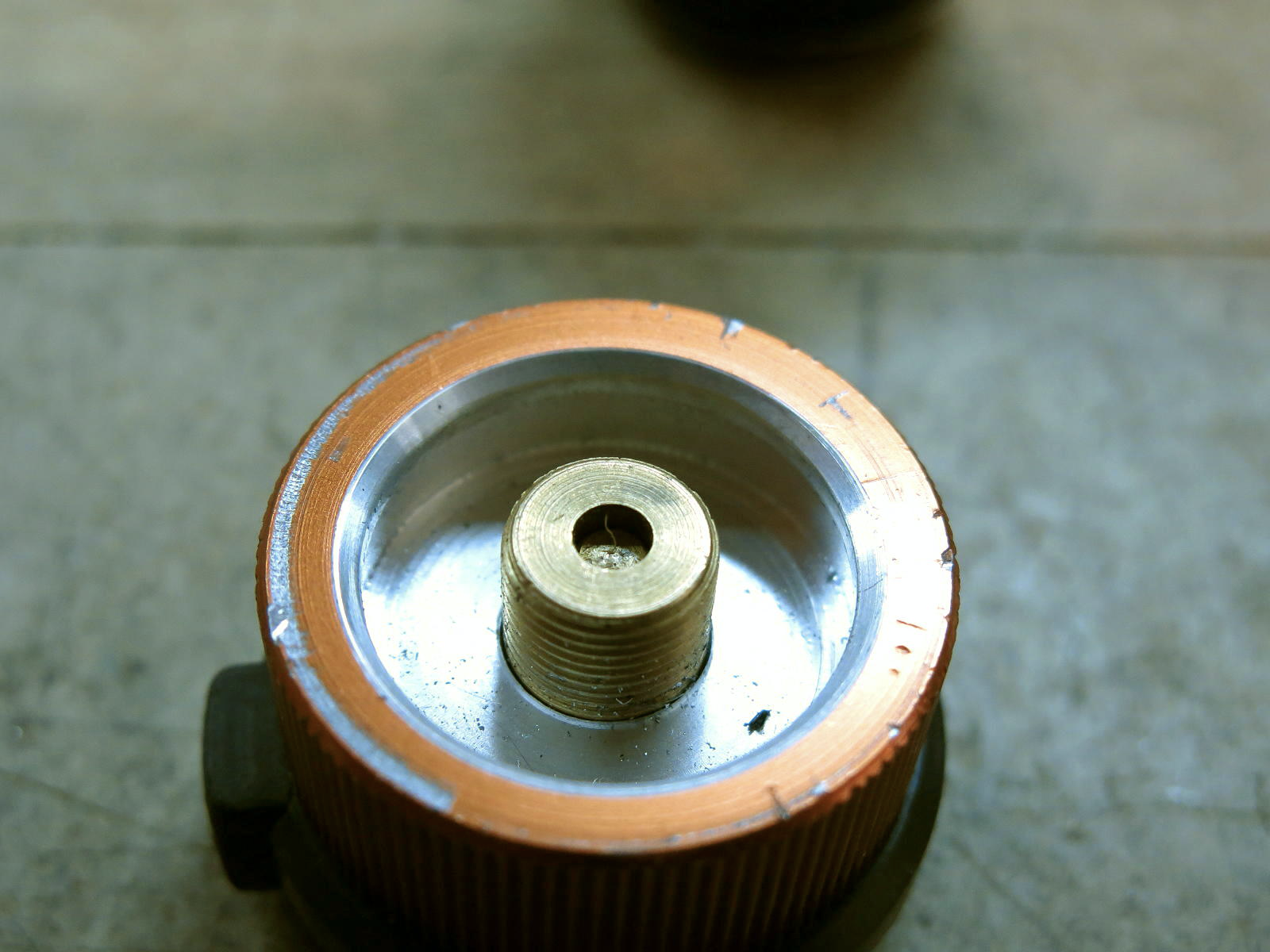 There are several different sorts of gas canisters on the market: in the traditional walking/camping area, we have screw-thread, Campingaz, and Powermax (discontinued). In the hardware store or BBQ area, we have cheap spray-pack cans, which hold about the same amount of fuel (220 g) as a mid-sized screw-thread canister (230 g). And we also have various refill cans used for refilling cigarette lighters and so on; they usually come with a whole range of little plastic adapters in the cap. Most of the camping style canisters are expensive: close to $8 for a 230 g of butane/propane, at least here in Australia. But I can buy four of the spray cans, each holding 220 g (~400 mL) of “butane” for just $8 total at the local hardware store. That is so much cheaper!

The “butane” in these spray cans is unspecified, but it is most likely a mix of n-butane (boiling point ~32 F / 0 C) and iso-butane (boiling point 11 F / -12 C), possibly roughly in equal parts. It is doubtful whether the vendors even know what is in the cans with any accuracy. To be sure, that is not good enough for winter use in the snow, but indeed it is usable in 3-season conditions with the ambient temperature above 40 F / 5 C?

Granted, propane bought in any decent-sized container (say 5 kg and up) is even cheaper than the ~$8/kg for the butane in these cans, but just maybe the further cost savings are not nearly as significant. Added to this is the worry about putting straight propane in a canister rated only for a 30%/70% mix: if it gets warm, the canister might be approaching its burst pressure. You just don’t know in advance, and if it goes bang, then it is too late.

These butane cans have a special fitting designed for little table-top stoves, sometimes called “wok stoves”. Unfortunately, the fitting is not directly compatible with our little canister stoves.

The rim around the outside of the Lindal valve and the notch in the rim is extra to what we find with our ordinary fuel canisters, but they do not get in the way. However, the metal tube up the middle above the nipple is “impossible”.

I have seen many cans advertise a thing called Rim Vent Release (RVR), which is supposed to be a safety feature. As far as I can see, the top rim has sets of three tiny slits around the rim. They are the dark marks on the rim in the left-hand photo. After examining them closely, I think these were added after the cans had been made, in a sort of retro-fit. Anyhow, if the internal pressure gets too high, first the top rim deforms, exposing lots of little leaks at those sets of slits, as shown at the left, then the overpressure is released through those leaks, as shown at the right.

You are most likely to have this problem only when running a stove with an exposed flame. So now you have a huge leak of butane next to a flame. The label on one package says  “if activation occurs a controlled fire may start”.

“Controlled,” eh? Would you prefer a large ball of flame from the vents or an explosion? Hummmm: frankly, I would prefer neither.

Information on the web implies that there may also be a thermally-activated Temperature Sensing shut-off Valve (TSV) inside some butane cans, which also provides some safety. I know nothing about this, and I don’t think it is globally available. It seems to me that it could lead to an explosion.

The bottom line here seems to be that no matter what you do to make something safe, there will always be a bigger fool. Be warned and take care.

Just because the standard fitting on one of these butane cans is incompatible with our stoves is not the end of the story. There are a several adapters on eBay that could allow a butane can to drive a small stove while lying sideways in its “correct” position; one of these is shown here. This correct position is how the can is mounted in a wok stove, and it has the black tab and the fuel delivery tube pointing upwards. In this position, the canister delivers a gas feed.

Research Scientist. Been walking all my life, mainly off-track - we don't have 'trails' here, and I always go with my wife. Summer and winter, lowland and highland, Australia and Europe. Forced into UL gear by heavy packs and increasing age. :-) Example Gear List at http://www.backpackinglight.com/cgi-bin/backpackinglight/caffins_4_month_gear_list.html BPL email: [email protected]

Home › Forums › How Can Cheap Butane Canisters be Modified to Work With Canister Stoves?