Time in the outdoors gives us a chance to question ourselves and find the primary motivation for fear. Oh and there are bears too. 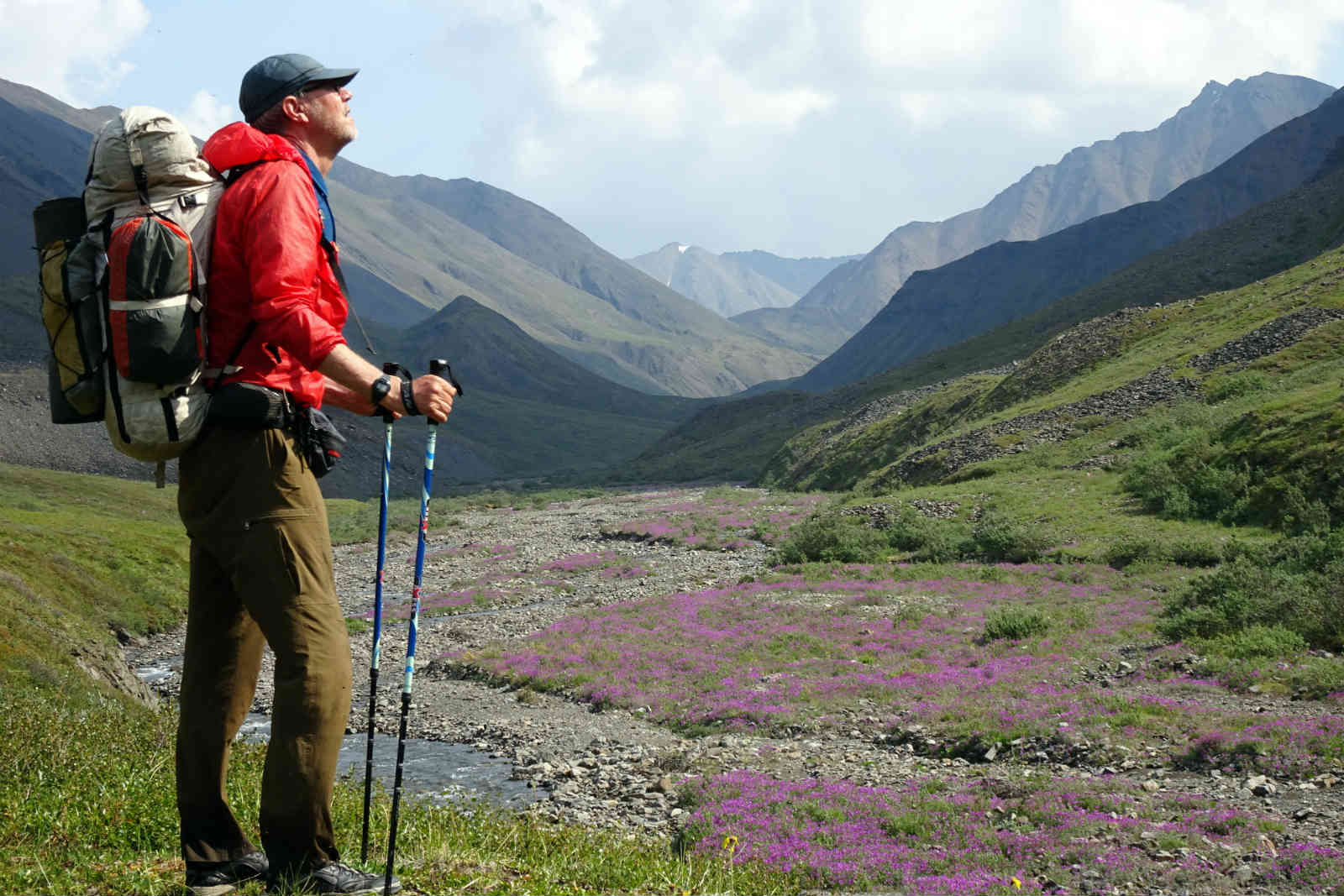 Going on long hikes on your own is something that grows on you. I have been doing it for four decades, so I guess I should know. During those years I have increased the dose, perhaps best described as consisting of length and remoteness. The 2014 hike through the ANWR I saw as a sort of pinnacle in my career as a solo hiker in remote areas. That still holds and I doubt that I will try to match that experience from 2014.

There has always been some amount of trepidation during the years, as I have been pushing the boundaries of my own tolerance for loneliness and distant places. No serious mental upheaval, but often a slightly jittery feeling when approaching trailhead. Why am I doing this? Literally, after five minutes hiking, this is gone and I feel at home. I have seldom felt any fear while on the trail. Some of it is because I am a careful guy who is reasonably aware of my skills and try to avoid situations that are dangerous.

Despite this, during the 2014 trip through the ANWR I had some of the scariest moments of my life. Particularly two sequences, where I negotiated some steep terrain and a mistake or bad luck could have been very serious indeed or even fatal. This led to me rerouting the planned trip last year, taking a more northerly route that avoided some of the highest and steepest passes in the ANWR.

What I was going to do this year, I had decided, was to explore some of the area that I had thus skipped last year. I wanted to take a look at some of the high country, but without the pressing need to move forward that a schedule and limited food supply meant. I wanted to be able to check out a pass and simply go back and find another way if it looked too hairy.

Right now, things did in fact look a bit scary. It was raining and I was making my way up along an-ever narrowing creek on slippery boulders, the rock walls gradually closing in on me. Part of the charm with the Brooks Range is that you can navigate with maps of the 250 K caliber from the 1950's. They are usually correct, with the odd error now and then that makes things interesting. Right now it was impossible to tell if this particular arm of the creek or the one I had just passed, would lead to the best alternative of crossing the continental watershed. Both seemed to end at doable passes.

Even my modern GPS did not show that much detail in contour intervals for these parts. Well, that's what I was here for, to explore, was it not? Or was it?

Before me the creek pushed through a narrow enclosure of steep rocks, falling a couple of meters or so, down to where I stood. There seemed to be two alternatives. It might be possible to climb along one side of the steep rock outcrop, just above the water. Or, the creek not being that big, I might climb in the creek itself. This would probably entail just wearing my rain gear and packing all other clothing into the dry bag in my pack.

It did not take me that long to loudly voice my opinion on the situation: This is no fun.

Then I turned and retreated downstream. I would try the other arm of the creek, leading up to another seemingly passable pass. This ravine turned out to be a lot easier to travel, wide and full of rocks, with no narrow passages. After a while it even stopped raining.

There are few things that I like less than peer pressure. And I have usually been able to shrug it off. Even as a kid, any dare left me unperturbed, while others around me seemed to do the most stupid things to prove that they were not afraid or whatever.

All this resurfaced because I was pondering this aspect about fear. I had now done exactly what I had told myself while preparing for the hike; if it looks to scary I will try something else. But what I was beginning to examine in earnest was the not-so-simple answer to the simple question: Why was I here at all?

This was an area of mountains and ridges that I had skipped during last year's hike, instead choosing a lower, safer route, further north. So what had prompted me to 'explore' this area this year?

Was it because I yearned to see these spectacular parts along the spine of the Brooks Range? Was it to enjoy the immense beauty of this stark land, far from anywhere people lived? Or was it because I had been afraid of this area last year? Had, in fact, my subconscious been nagging at me for chickening out, while I consciously had been prancing around wallowing in my, perhaps imagined, imperviousness to peer pressure.

One thing was certain, the afternoon was wearing on and it was time for a nice cup of coffee. I found a flat spot in this rock heaven, where even lichens where rare. The silence after the rain was palpable, with low clouds rolling along the steep slopes on either side of the creek. A trickle along the edge of this little ledge, where I sat on my pad, provided a cup of water for my mouth and another for my pot. I sat with my back resting against my pack, warm in my insulated hoody and rigged my canister stove beside me.

This was part of my personal hiking routine for when I had plenty of daylight. I usually stopped for coffee around 4 o'clock in the afternoon and then continued hiking until around 7 pm. During this break I reinforced my usual hourly snacking on nuts, raisins and chocolate with a soft tortilla rolled around a chunk of stick sausage.

I sat there in the gloom, a jumble of black and reddish rocks covering the valley floor and slopes in all directions. For a while I drove this thought about fear around the block a couple of times; fear and its roots and why I was here, trying to examine it from different directions.

To question your own motives and what drives you is not always easy. Most of the time the reasons are so obvious, or seemingly so, that there is no need. Sometimes, perhaps, we are afraid of what we will find.

Was I in fact here to prove myself? To me? Or to someone else?

I could see what I thought to be the pass in the distance. It looked doable, but I could of course only see one side of it. If the other side was difficult or impassable, pressing on today might not be the best choice. So I decided to pitch my tent on this little flat area among the rocks. It was not likely that a better place to camp would appear in this rock garden.

Pitching my shelter was only possible with the little trickle of water positioned exactly at the entrance to my Trailstar tent. I scratched with a rock in the gravel to focus the flow and speed it on its way. Doing this and busying myself with the usual chores around camp I kept coming back to my own motivations for being here. Nothing that answered my doubts surfaced.

I still have not reached a conclusion.