You are here: Home / New Features / Estimating the Age (Lifespan) of Your Backcountry Water Filter

I worked in the 3D printing industry for many years: actual jetting of material (not dispensing molten material through a single nozzle). We were using a 300 dot per inch printhead to generate solid objects and the printhead contained 1200 nozzles. Building a single 8” tall object was equivalent to printing 5000 pages.

Supplying the printhead with clean material was paramount to printing reliability as well as longevity. To assess this issue, a metric was developed to evaluate jetted material for cleanliness. This is called Conductivity Testing. To conduct the test, liquid was placed into the test apparatus and the fluid level was held at a constant level – this would provide a uniform fluid pressure. Downstream from the vessel was a standardized filter material. The liquid was allowed to flow through the filter and the data was collected. To generate a Conductivity Chart, you plot the real-time flowrate of the liquid through the filter material (Y-axis) against the total amount of fluid that had passed through the filter (X-axis). The chart would look like a straight line with a negative slope: high on the left side and diminishing on the right. 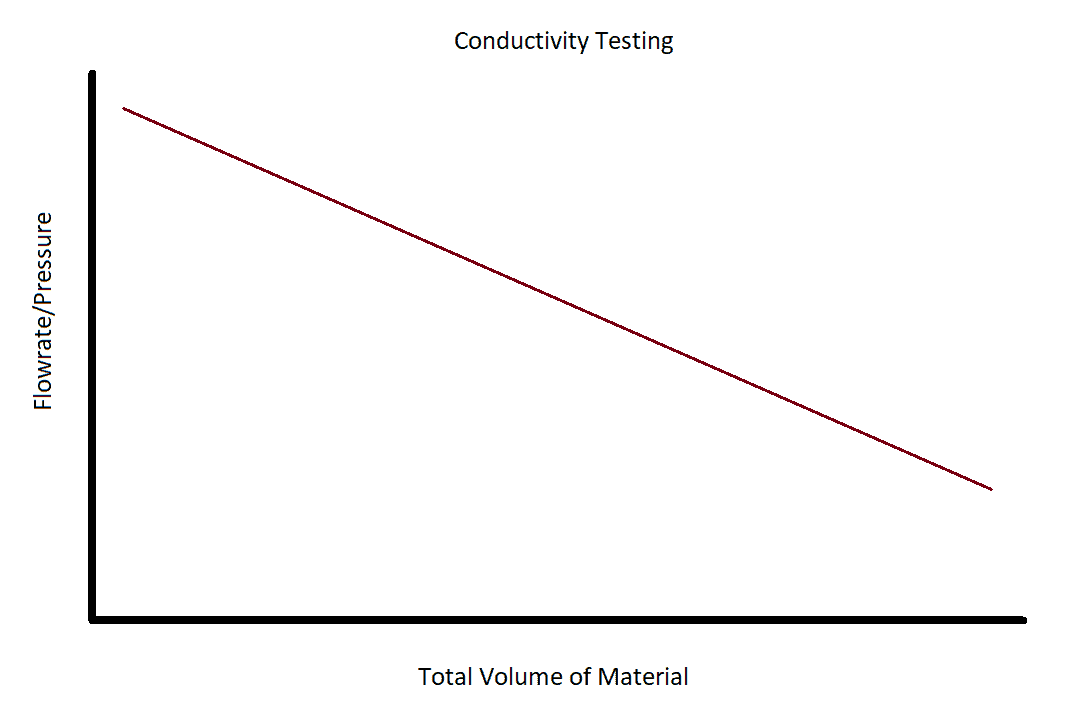 The slope of the line would give us the rate at which the filter clogged or in other words, a measure of the material cleanliness.  The minimum flowrate is defined by performance requirements needed to jet material correctly.  The total volume of material jetted is defined by marketing requirements. From this chart you can determine how many cubic feet (or pounds) of material could be jetted before the flowrate drops below acceptable levels. 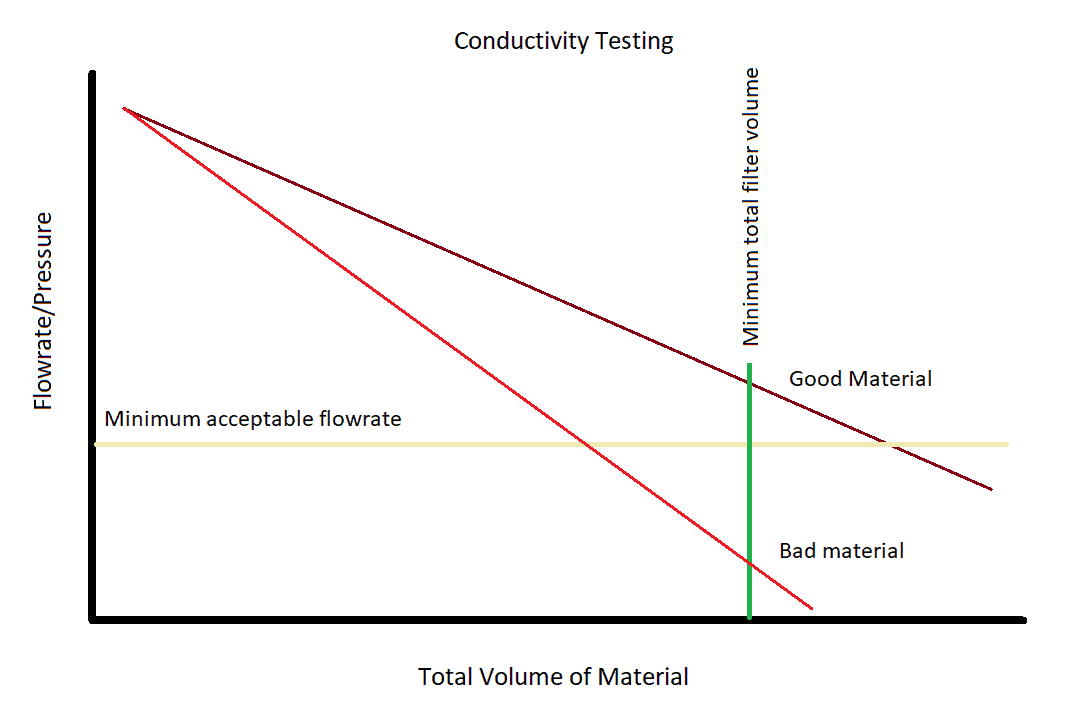 The test metric is excellent for verifying material cleanliness, so we can apply this to estimate backcountry water filter performance.

However, we have no control over water quality in the backcountry. Modifying the test methodology to estimate effective filter area does add a lot more value to help characterize the performance state of the water filter.

It would be easy to replicate this type of test for water filters and the results would be highly repeatable. That being said, the system we used for evaluating 3D printing material quality, described above, is bulky and requires additional equipment that would make it difficult for most backpackers to emulate.

Thus, in this article, I am proposing a faster and easier-to-use test that, while not as accurate, the would be easy to replicate and is user friendly enough for most backpackers.

The goal of this test is to determine the effective age of your backpacking water filter based on comparing its current flowrate to its flowrate when new.

I developed this test procedure using Sawyer Squeeze and Sawyer Mini filters, since they are probably the two most popular filter models in use by the lightweight backpacking and thru-hiking communities.

You can estimate the life of your Sawyer filter using a pretty simple test setup. The test requires that you measure the flowrate of a new filter in order to establish a baseline.

Darcy’s Law is used to characterize fluid flow through a filter media. However, this assumes that the fluid is free of particulates. By adding the assumption that the filter will become clogged over time, you can estimate the life of the filter by calculating the reduction in the effective filter area. By monitoring the flowrate, you can approximate the amount of useable filter (effective remaining filter area) that is remaining in your filter. Additionally, you can see the effect of backflushing on restoring the life of your filter.

Step 1: Drill a hole in the bottom of the Smartwater bottle. The hole should be small enough (~3/16” or 5 mm) that you finger can prevent air from leaking into the bottle. This is required to prevent a vacuum from forming in the water bottle during filtration, which will influence repeatability by altering the flow rate. 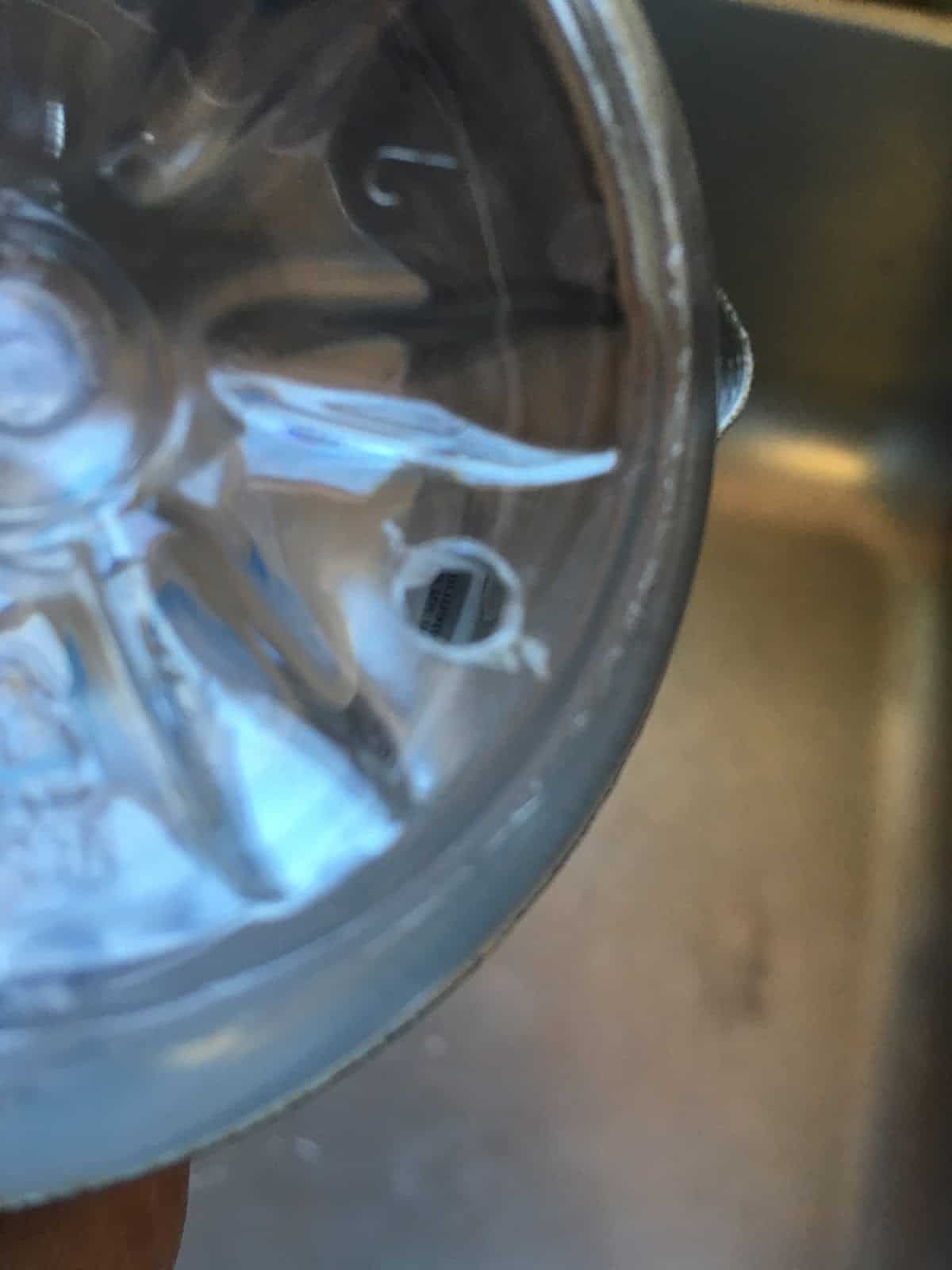 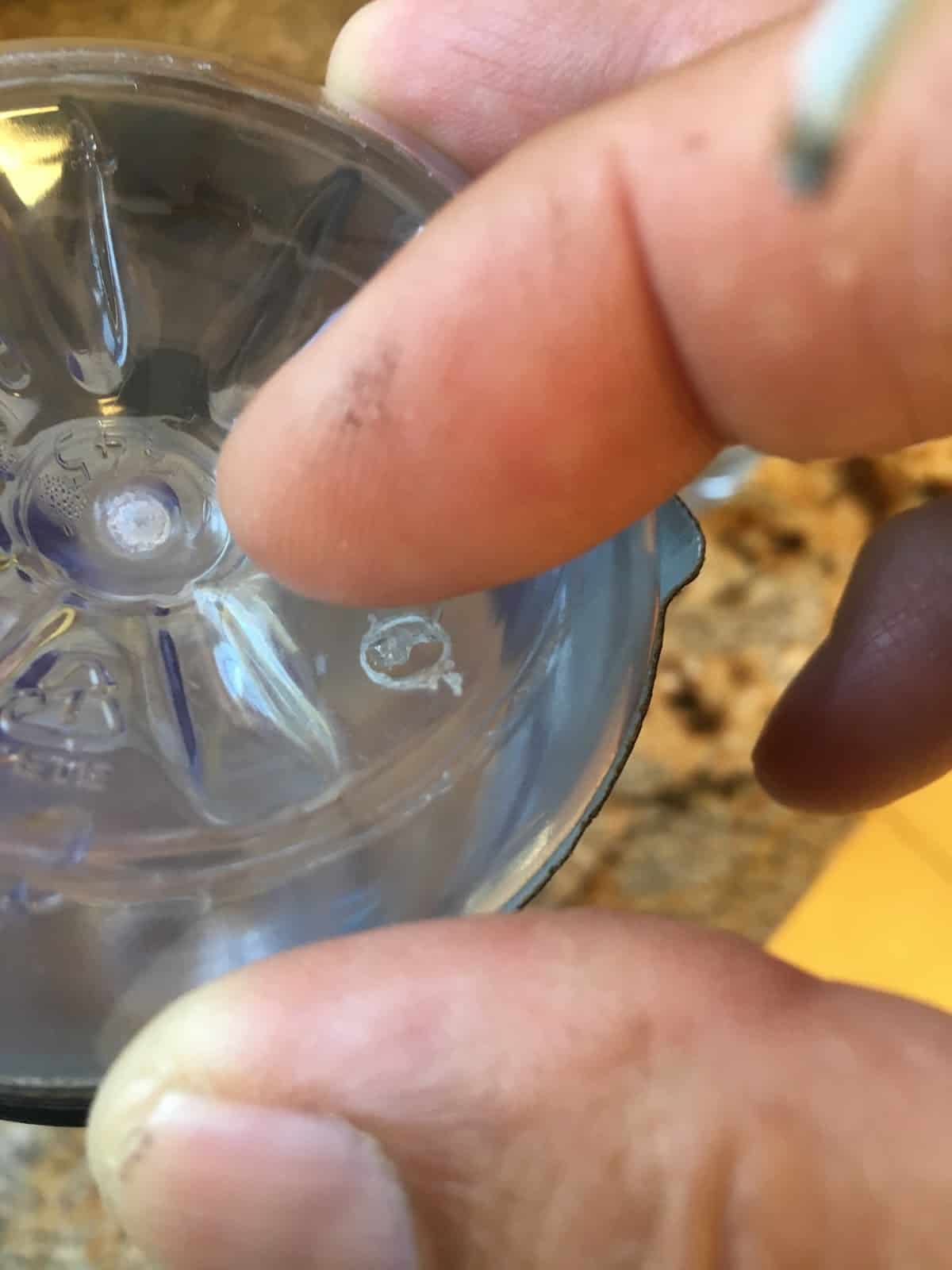 Step 2: Make sure that your filter is wetted out: I placed mine in a full glass of water overnight.

Step 3: Fill your sink (or a bucket of water) full of water.

Step 4: Submerge the bottle completely under water and remove all of the trapped air. Do the same with the filter and attach the two while keeping them underwater. In the picture below, the assembly is completely submerged below the surface of the water. 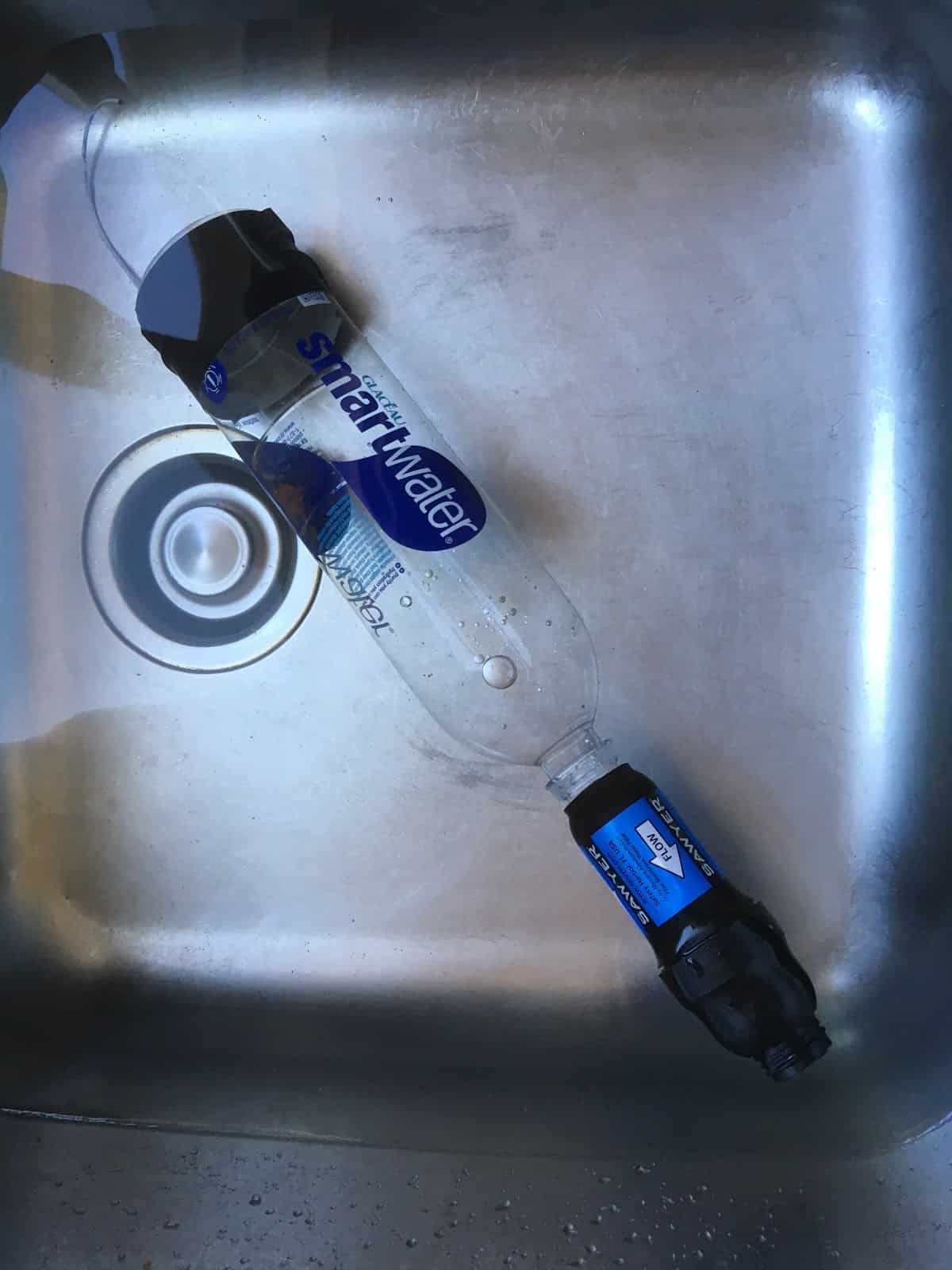 Step 5: Place your finger over the hole on the bottom of the water bottle and raise the bottle/filter assembly out of the water. Water should not flow out of the filter (there may be a few residual drips, and that’s OK).

Step 6: Place a bowl on top of the scale and tare the scale.

Step 7: Suspend the bottle/filter over the bowl. Release your finger from the vent hole, and at the same time, start a stopwatch. 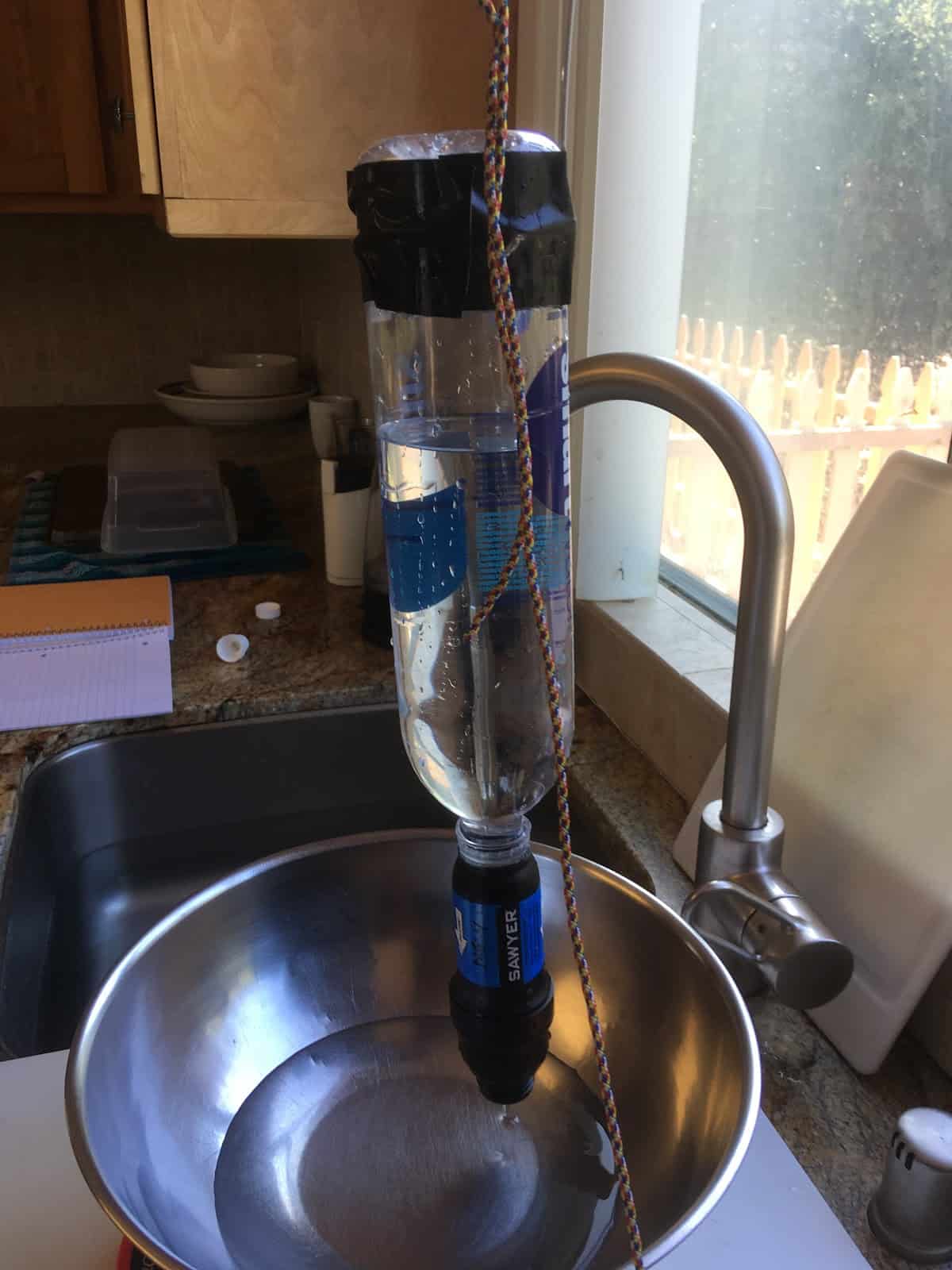 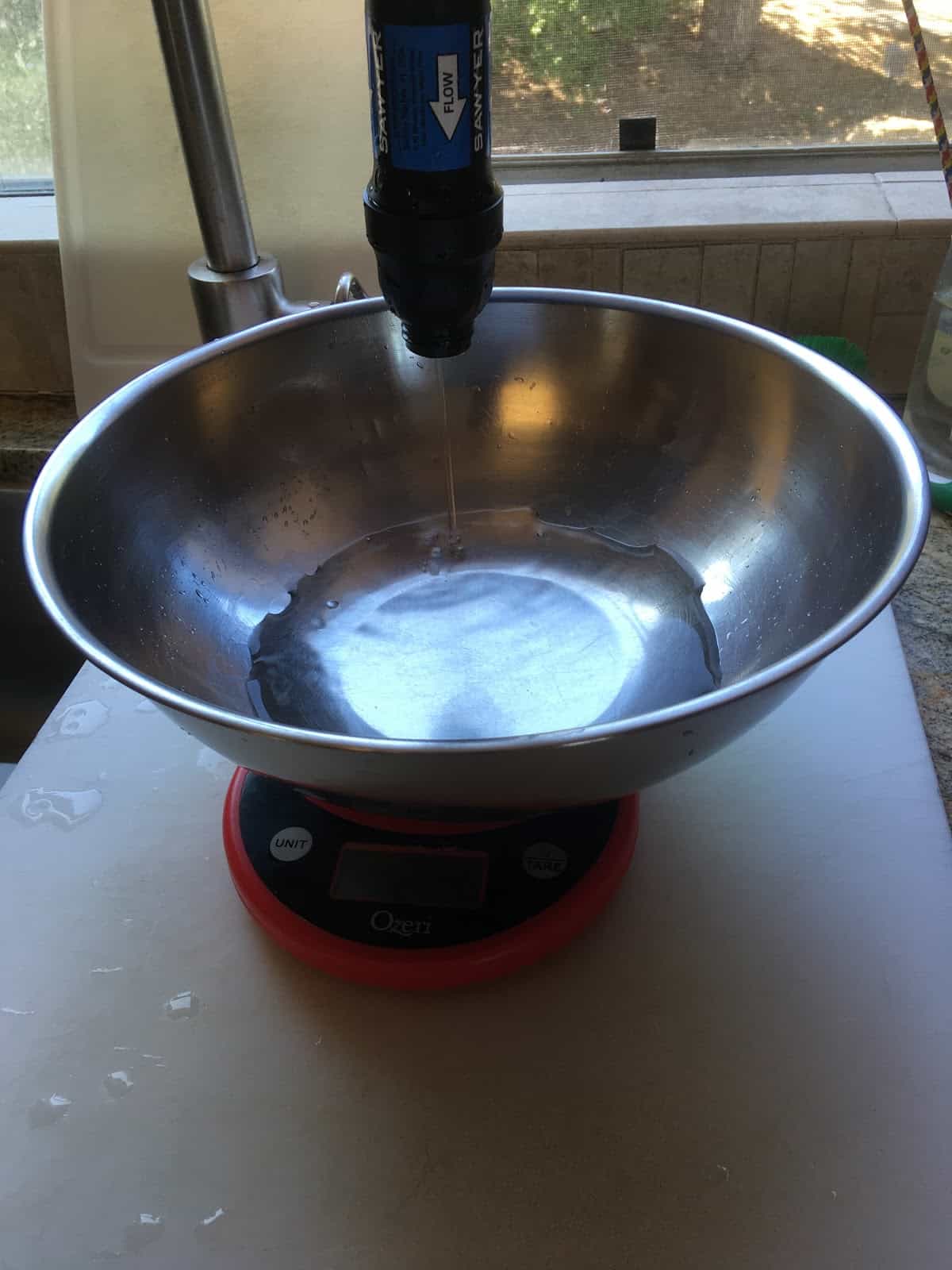 For reference, I tested a brand-new (unused) Sawyer Squeeze filter and a used Sawyer Squeeze filter. The used filter has been my go-to filter for the last 5 years or so. I haven’t been judicious about backflushing or performing maintenance on the filter after my trips. I also do not have a clear idea as to how much water has been through the filter.

The test was conducted 3 times. Due to good repeatability, I elected not to include more replicate runs. The same batch of water was used for all tests and the water temperature remained constant. After the test, the filtered water was poured back into the main body of water.

The test was limited to 500 ml (16.9 oz) for 2 reasons. First, I was concerned about the impact of the reduced pressure head over time (h). As the water level dropped so would the flowrate and that could add error into the measurements. Secondly, my digital scale times out after 3 minutes so the change in volume (ΔV) had to be managed.

The following table summarizes my results with the new filter, the used filter, and the same used filter after a backflushing regime:

Darcy’s Law was first used to describe fluid motion through permeable media (e.g., water flow through dirt and sand). Darcy’s Law has been used by engineers for decades to characterize filter performance. The basic equation is defined below:

Engineered filters are easier to analyze compared to earthen systems as a number of variables are under control.

K (hydraulic conductivity) is usually a design specification. A and L are defined by the physical design of the filter. For the purpose of this test, K, A, and L are all constants since we are comparing the performance of the same filters.

Darcy’s Law was formulated with the assumption that the fluid does not contain any contaminants (particulates). We can adjust the formula by assuming that as the filter clogs, the effective area of the filter is reduced.

Given the test protocol, the initial volume (V) is defined as a full bottle and the final volume occurs at the termination of the test when 500 ml (16.9 oz) has been filtered. Additionally, h (pressure head) is geometrically fixed as a function of the bottle’s dimensions.

Since K is a true constant between two filters having the same design, we can rewrite Darcy’s Law for both the new and used filter tests:

V, K, L & h are basically constant over the course of any replicate tests so they cancel out of the equation.

The formula now reduces to:

This can be rearranged into:

Using my test data in the Darcy’s Law formula above, we can compare the performance of my used to a new filter:

Water quality is unknown and filtered volumes will vary.  Here is a graph speculating what can happen over the life of a filter. 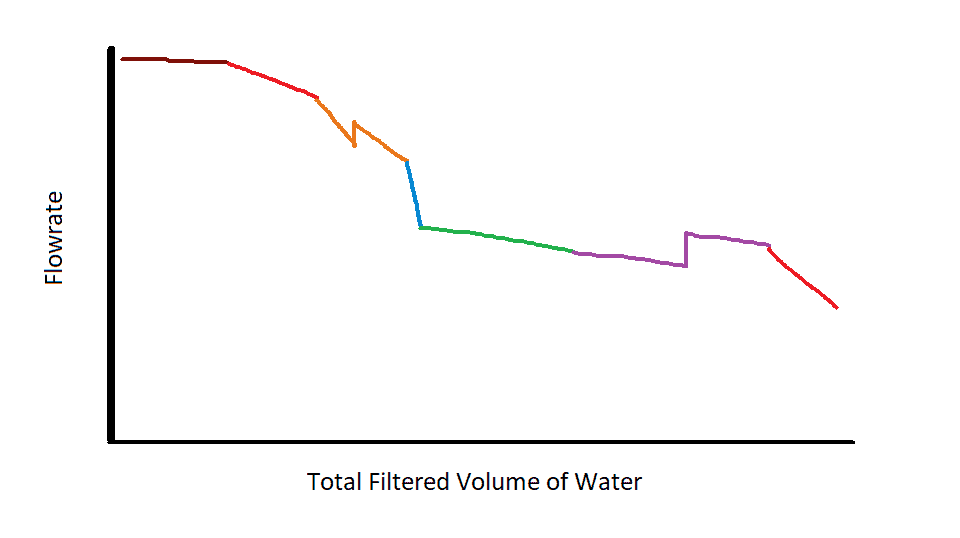 Each color represents a different backpacking trip. The decreasing slope of lines, e.g., may be a function of particulates clogging the water column (steep lines represent the filtration of water with higher particulate concentrations). The vertical spikes represent attempts to backflush the filter.

This simple test would provide insight about the effective surface area of your water filter’s media (in a sense, it represents a fuel gauge for the filter’s life).

No meaningful conclusion can be drawn from the backflushing results because the history of the used filter is not well-documented. More field data would be needed in order to clarify the effectiveness of backflushing, de-calcification, or any other mechanism by which filtration could be improved.

In an ideal world, one could measure results on (for example) 10 samples of new Sawyer filters to create a baseline range of flow rates for new filters. Users could then repeat the test protocol to estimate the actual effective filter area or life of their used system. If successful, the database could be expanded to include other gravity/squeeze-based filters.

Water quality around the country (world) is highly variable, so you must select the right filter for the right conditions. When camping in and around slot canyons and silty water sources, I usually bring my MSR MiniWorks filter because I can easily clean the filter element even in silt-laden water. Otherwise, I use the Sawyer Squeeze for 90% of my trips.

When they first came out, the reported life of a Sawyer Squeeze was 1 million gallons (3.8 M liters) of water!

A million gallons is an absurd amount of water. I knew that the only way that they could claim those numbers were based upon something like continuous-flow (i.e., Conductivity) testing using some type of clean model water. Sawyer was forced to back off on those claims as they could not verify the claim with confidence, and it had almost zero real-world applicability.

The Sawyer Mini claims to have a filter life of up to 100,000 gallons (380,000 liters) of water. That’s great but the Mini has an order of magnitude less filter material that the Squeeze. After more than 5 years of use and abuse, the test results indicate that my original Sawyer Squeeze filter still has 55% of its life remaining. In terms of equivalence, that’s the same as about 5 Sawyer Mini filters!

In my opinion, the Sawyer Squeeze is superior with respect to flowrate, longevity and most importantly robustness (or latitude in its ability to resist clogging by problematic water sources). The biggest downside of the Squeeze for most people is the weight. That being said, the Sawyer Squeeze filter weighs only 1.0 oz (28.3 gm) more than the Sawyer Mini.

This test protocol proved to be very useful for me in making the decision to stick with the Sawyer Squeeze, for its performance-to-weight ratio vs. the Mini, especially with respect to its durability (longevity).

Disclosure: Some (but not all) of the links in this review may be “affiliate” links, which means if you click on a link to one of our affiliate partners (usually a retailer site), and subsequently make a purchase with that retailer, we receive a small commission. This helps us fund our editorial projects, podcasts, instructional webinars, and more, and we appreciate it a lot! Thank you for supporting Backpacking Light!