You are here: Home / Articles / The Overlook: Understanding Livestock Grazing in Wilderness Areas 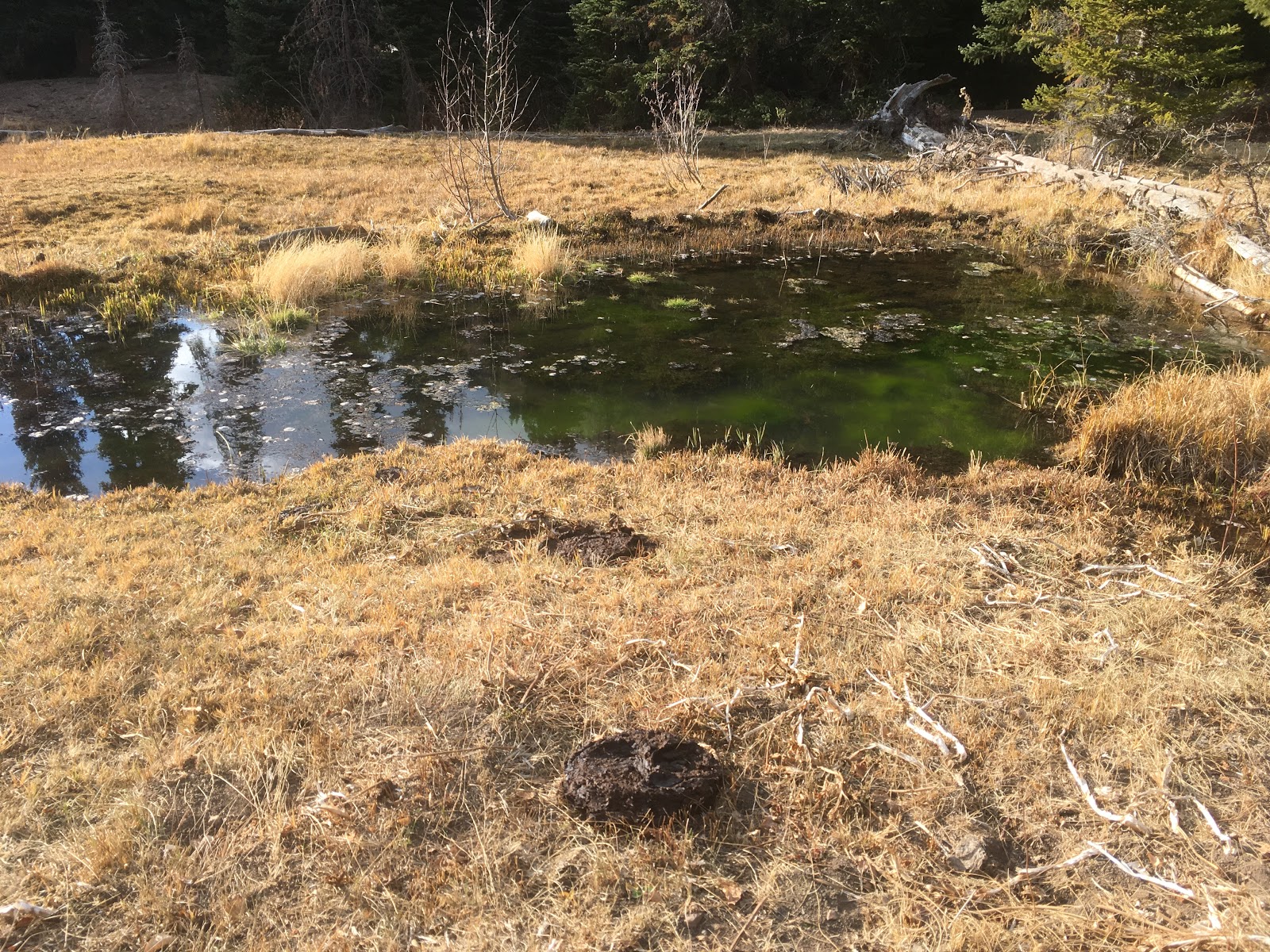 On a Saturday afternoon, we hit the smoky road with the sun setting red outside of Evanston, Wyoming. We passed windmills beside I-80 in the twilight and let the GPS guide us to the China Meadows trailhead on the Northern Slope of the Uintas. The next day, we would be heading into the Red Castle area of the High Uintas Wilderness.

We camped in the pines while the yellow moon rose out of them and crossed the sky while we slept. Cows grunted, mooed, and bawled in the dark just before dawn. After crawling sleepily out of the back of the truck, we made tea and grits, packed our packs, and then rolled slowly down the road to find the China Meadows parking lot completely filled. Without exaggeration, there were probably about 60 cars, indicating that well over 100 people would be on the trail we were about to walk.

Our first encounter on the trail, however, was not human but bovine. We had been hearing them all morning, hoping they’d be out in a meadow somewhere, trampling delicate riparian vegetation, rather than on the trail where we’d have to deal with them. They turned out to be in both places. Within a half-mile (800 m), we saw the first giant black cow standing like a disgruntled and erratic bus. The mechanisms and the pilot behind those giant white eyes were unpredictable, and the tension between that unpredictability and the very certain weight of the thing was terrifying. The leashed dog was asked to heel and did so promptly, and then we stood there watching the beast.

“How much do you think they weigh?” Hallie asked.

“I don’t know. A thousand pounds?” I guessed.

We stood and waited and watched the enormous cow watch us. Her also enormous baby ambled out of the aspens, ducked his head under her side, and found breakfast. Since they appeared uninterested in letting us pass, we decided to walk around — way around. We tromped into a soggy meadow through waist-high grasses and between bunches of willows. Thankfully, the cow seemed disinterested, and we were able to pass easily.

But for the next mile (1.6 km), we dodged giant, black cows. Some stood in the trail; others peered at us through the lodgepole from every direction. We nervously and quickly moved through, hanging tightly onto the dog’s leash. When the trail led to a gate, we opened it, stepped through, and closed it from the other side.

“I wonder if this means no more cows,” I inquired.

The cows we encountered were in designated Wilderness, which felt strange considering the use of words like “untrammeled” in the Wilderness Act. But it was never going to get passed without a livestock provision. Wayne Aspinall, a Democrat from Colorado, stalled the vote from 1960 to 1963, refusing to vote until a livestock provision was added. Today, there is livestock in about 330 designated wildernesses throughout the lower 48, encompassing a total area of about 10 million acres. The Wilderness Act of 1964 stipulates that any permits active before the Act are allowed to continue almost indefinitely. Due to this livestock inclusion, exceptions are often made for ORVs, fences, the poisoning of prairie dogs — things otherwise not allowed in Wilderness.

Livestock in Wilderness areas and public lands in the west is a complex and divisive issue. As a hiker, my first reaction to encountering them on the trail always has to do with personal safety — I don’t want to be trampled. Then I see the damage they’re doing — cowpies in springs and wet meadows, riparian vegetation devastated. I start to ask, “what are they doing here?” Then I think about the people who own the cows — whose cultural identities are inextricably tied to them. It feels uncomfortable to be frustrated with someone’s means of making a living. Does a backpacker have the right to tell them their cows are destructive?

The majority of public lands grazing in the 11 western states of Arizona, California, Colorado, Idaho, Montana, New Mexico, Nevada, Oregon, Utah, Washington, and Wyoming takes place on Bureau of Land Management (BLM) and United States Forest Service (USFS) land. Because these lands are not irrigated, they are referred to as rangelands — in contrast with pasturelands, which are irrigated. There are about 21,000 livestock operators on BLM and USFS lands in the west. Compared to the 800,000 operators in the U.S., these only make up 2.7% of all livestock operators in the country.

According to a report by the Center for Biological Diversity, “the federal lands grazing program generated $125 million less than what the federal government spent on the program in 2014.”

Part of this figure includes nearly $24,000 that taxpayers dole out to each one of these operators every year. While I don’t see any problem helping out those who are struggling, I do feel some hesitancy about helping out a struggling industry that is so ecologically destructive. In addition to direct costs, there are millions of dollars in indirect costs associated with remediating damage caused by livestock and the removal of predators.

I thought of this as we stepped over puddles filled with cowpies. The ecological costs — predator extermination, vegetation removal, and trampled riparian areas — didn’t seem worth the minimal contributions made to the GDPs of these 11 western states. Shouldn’t we just have cows in landscapes less harsh, where they can graze happily?

After a couple of beautiful days exploring lakes and waterfalls and watching unreal rainbows materialize across the red quartz-sandstone of Red Castle, the trip concluded with an exit through the same cow-choked stretch of trail. But this time, it was even worse. The first mama we encountered turned and faced us and started towards us. Chaotically, we scurried backward a good thirty feet (9 m) and reevaluated. She stood staring at us. “She looks pissed,” one of us said. When she finally went back to grazing, we detoured around her only to find ourselves face to face with another protective mother, this time a 1,500-pound (750 kg) beast.

“What do hikers do about cows?” Hallie asked. “We can’t just be expected to walk past these clearly upset and protective mothers. Can we?”

I suddenly realized I had no concrete answer to this question.

“As soon as we’re back in service, I’m going to look up how many people are killed by cows each year,” she continued.

Agreeing to play it safe, we began bushwhacking through young aspens, common juniper, and willow to get as far away as possible from those wary mothers.

When we hit I-80, Hallie Googled, “How many people are killed by cows in the U.S. each year?” The answer was somewhat surprising to me — about twenty, mostly killed by kicking and trampling, and most by protective mothers. This figure was much higher than the threats we think about more often, like bears and mountain lions. I suddenly felt like we’d been careless and vowed then and there to be more vigilant when in livestock situations.

Of course, the physical danger posed to backpackers like myself is just a tiny side effect of a much larger issue. And I recognize that my viewpoint is only one of many vantages from which to look at it. Again, I thought of the 21,000 livestock operators whose identities are linked to this way of life. That’s 21,000 people who I’m asking to change in order to maintain ecological intactness on public lands in the west. It’s a big ask, no doubt. I can hear their response, too — “What do you want me to do instead?” Undeniably, no one deserves to have the rug ripped out from under them like that. But the government subsidies are already so huge that it makes a lot of sense to just use that same money for establishing new ways of life for these people.

This will help them get on their feet and establish occupations they can be proud of. Maybe this is easier said than done, but I can see this way forward and feel hopeful while still wondering if backpackers, conservationists, politicians, and western livestock operators are capable of having this conversation together right now. Hopefully, we will be able to have it soon.

The Wildlife News “Wilderness and Cows”