You are here: Home / Articles / Springtime Solitude in Southern Utah 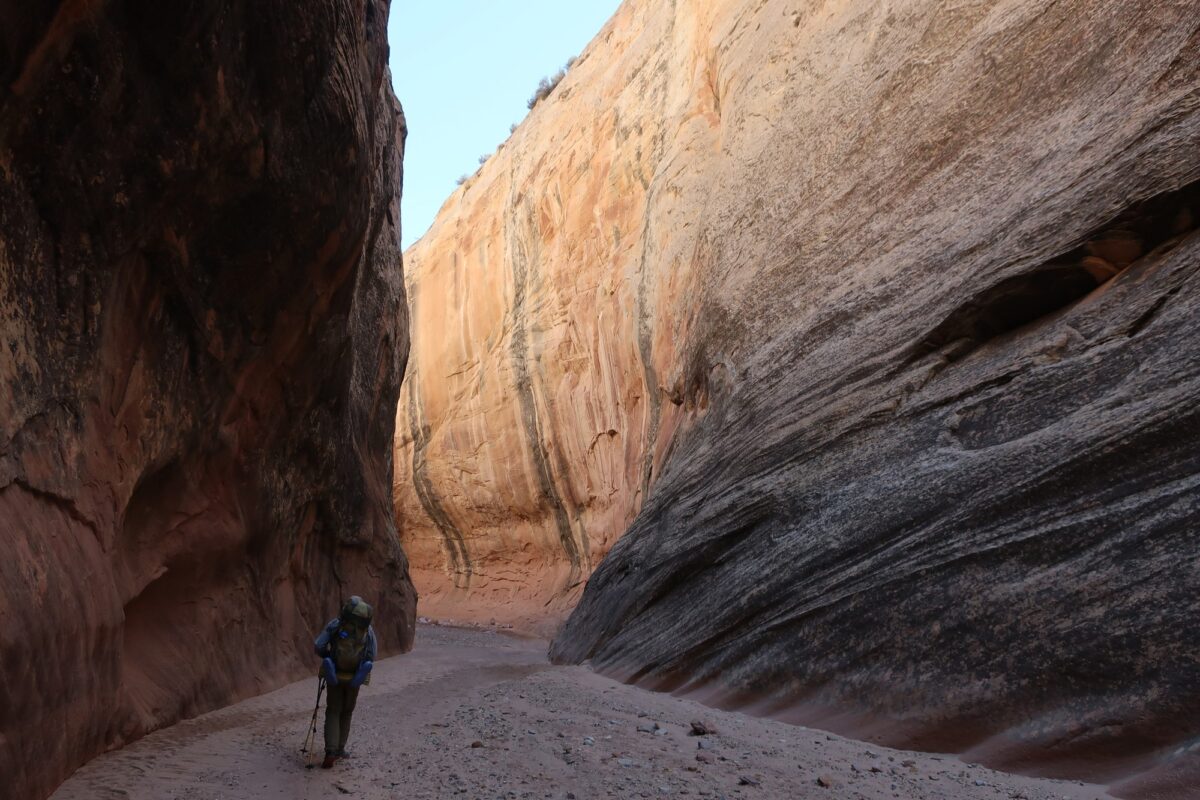 Escape to the Desert

Waiting in front of the crowded Capitol Reef National Park visitor center on the first of April, I felt a bit foolish. My friend Ben and I had made an ill-timed arrival a half-hour before they reopened from their lunch break and, in a minor miracle, had been able to park in one of the few available parking spaces. But we still had to wait for an agonizing 30 minutes while the spectacle of a national park parking lot unfolded before us. Barking dogs, near-misses between moving vehicles and small children, and stressed conversations among groups of visitors who seemed to only have one hour to spend in the park on their way to and from the other national parks in Utah and wanted to make sure what they saw in that hour was “The Best.”

As backpackers who typically opt for wilderness areas or national forests where no permits are needed, we were both a bit unprepared for the lively atmosphere that precluded our backcountry sojourn.

We’d driven down from Montana the day before and several lifetime’s worth of backpacking possibilities passed by our windows. The Bitterroots, the Beaverheads, the Lost Rivers, the Lemhis, and plenty of other mountain ranges shot skyward as we headed southward. The snowpack kept us from exploring those mountains anywhere other than in our minds and we kept our sights on southern Utah, home to some of the best spring and fall backpacking on the planet. We made it through Salt Lake City without too much traffic, but it was still a surreal experience after not having visited a metropolis in over a year – instead being immersed in the slow pace and peacefulness of my small mountain town and the even slower pace of its adjacent and abundant public lands.

It seemed like the same billboards were repeated every few miles, and the number-heavy street names and copious amounts of concrete and cars made it feel like something out of a soulless future I didn’t want much part of. South of Salt Lake City, we stopped for the night at a numeratively-named budget hotel in Nephi. After checking into our room, which the proprietor earnestly implored us to not “smoke drugs” in (we complied, but apparently significant numbers of other guests had not, if the signs repeating this request were any indication), we stretched our legs with a run along a backroad before settling back in for beers, pizza, and an early bedtime.

We’d chosen Capitol Reef National Park as our destination for a few reasons. First, it didn’t require advanced reservations for backpacking. A free permit just needed to be issued – which took approximately four minutes – and there were no designated campsites to plan out or other logistical complications. Second, it had a reputation as being much less crowded than the other national parks in Utah. And third, it was among the shorter drives from Montana to spectacular canyon country scenery. I’d done the research – using maps, excellent information on the NPS website about backcountry routes, and online trip reports – and sketched out an ambitious trip for the four nights and five days we would have to spend in the backcountry. At nearly 45 miles, with almost the entirety of that distance in dry washes, canyons, or on faint old roads or footpaths that weren’t conducive to cranking out the miles, it wouldn’t be the proverbial walk in the park.

Add in the uncertainty of water sources and anticipating several dry camps, plus being in a landscape so fantastic and with so many micro-majesties along the route that we didn’t want to rush by them, and it was shaping up to be a trip that would kick off backpacking season with a bang.

Once our permit was issued and we’d gleaned as much information as possible about our route from the rangers (which, to be candid, wasn’t much), we drove to the trailhead nearly 50 miles away – with about half those miles on dirt roads. Any worries about crowds disappeared when we finally pulled into the trailhead and could count the number of cars on one hand. By the time we were ready to start hiking, two groups had returned from their hikes, and the number of cars, and people in the backcountry, had dwindled even further.

Six liters of water and five days’ worth of food is not light. When hiking uphill, in the afternoon sun and without any shade, it feels even heavier. The route I planned for us contained, for better or worse, the steepest and most exposed section of our route at the beginning. The route seemed to flow better this way and I figured that hitting this short stretch of challenging terrain would be best done on one of the shortest days of the trip, and when we were fresh rather than at the end of the trek. Despite having heavier packs, this seemed to be the right call and it delayed the fomentation of mutinous thoughts by my hiking partner by at least one day.

As luck would have it, we found a small pothole of water at the end of this initial two-mile traverse into the first of two major canyons we would explore. Not wanting to pass up the opportunity – for both water and a break – we stopped here to drink water, refill, and take a short break before heading down the canyon to our first night’s camp. This unexpected hydration station boded well for the other water sources on our trip – two tanks, one of which rangers were uncertain on the status of and the other which was reported to be about half-full (or half-empty, depending on your perspective). We knew there was reliable water in the canyon at the southern apex of our trip, but planned to use the other sources along the way to minimize our water carries.

The use of the word “tank” here describes a natural depression that collects water and serves an important ecologogical function in the desert. They are also useful water sources for desert backpackers.

Not very far down the canyon, we came across what could only be described as The Ideal Campsite. Plenty of flat ground, already impacted by other visitors, in accordance with NPS regulations, and with incredible views of the towering canyon walls from where our tents would be and where we would eat dinner. Our only hesitation about stopping was that it was a bit earlier than we would have preferred. After discussing whether we wanted to hike further the next day or continue hiking later into the evening with the most burdensome packs of the trip – and risking not finding another suitable campsite and having to shoehorn ourselves into a spot around rocks and cactus in dwindling daylight – we decided to call it an early day.