You are here: Home / Articles / Off-Season on the Oregon Coast Trail

Off-Season on the Oregon Coast Trail 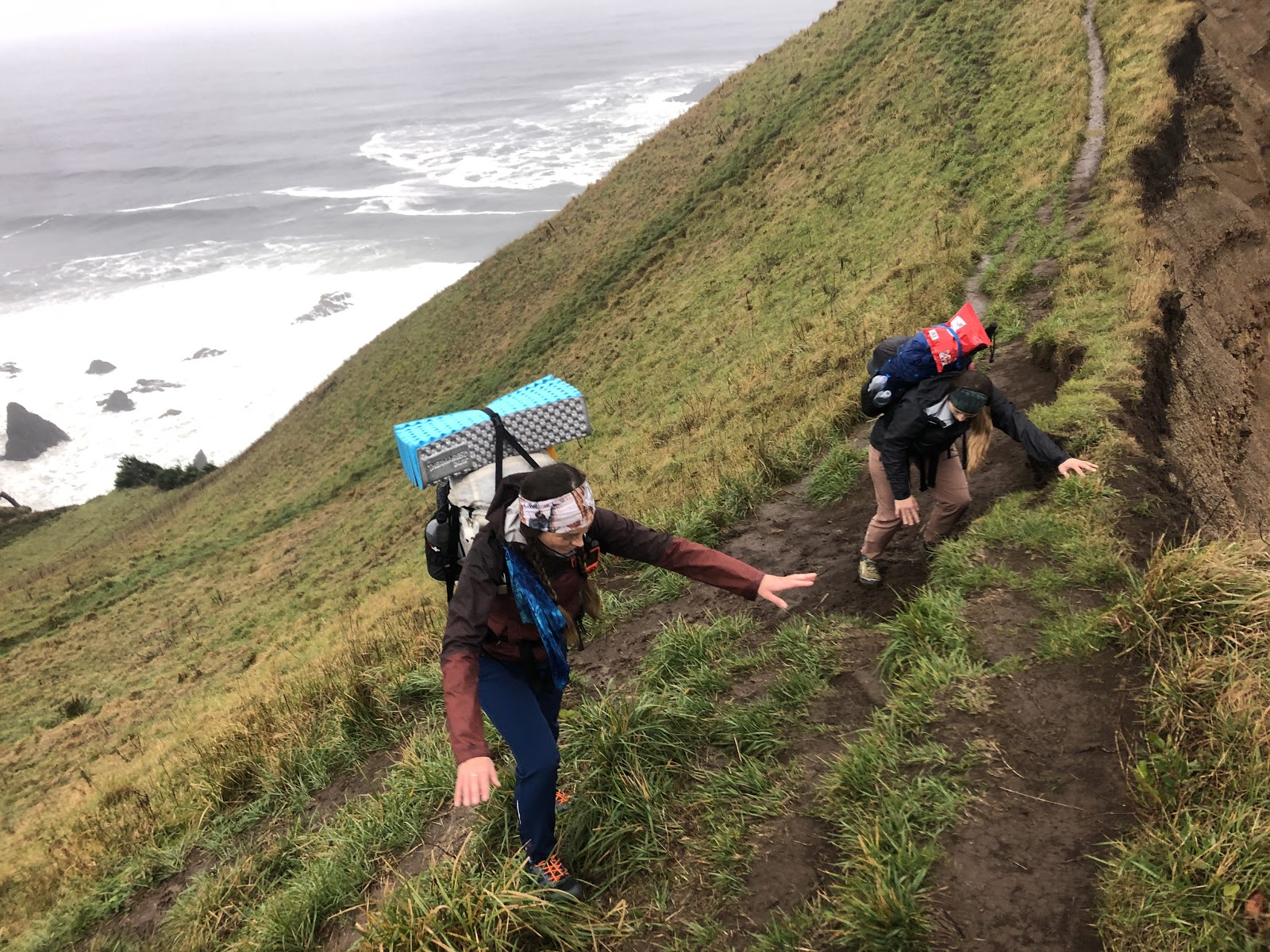 I don’t remember the exact conversation that led Julia, Becca, and I to hike the northern section of the Oregon Coast Trail (OCT) in November of 2020. But somehow, in the way that off-the-wall plans have of coming together, we settled on this very out-of-season section to tackle. We’d all had big thru-hiking plans for the year that obviously hadn’t happened, and were game to pretty much try anything that fit our timeline for a November trip.

Our backpacking plans started vaguely—the only parameters were a timeframe of the first two weeks in November, and a distance of 100 miles (161 km) or so. We looked for a trail at a lower elevation, a place that didn’t require a ridiculous amount of planning, and that we could all reach without an unreasonable amount of effort. As a bonus, I had to be in Seaside, Oregon to meet up with my boyfriend Jeff’s family towards the end of our trip, so with some very low-effort internet searching, we realized the Oregon Coast Trail led right to Seaside. All we had to do was figure out a place to start around 100 miles (161 km) south of Seaside, then hike the correct number of miles per day to arrive in town at the right time.

The Oregon Coast Trail is very much a summer-season backpacking route. It is 363 miles (584 km) long, beginning on a stretch of beach by the unmarked CA / OR border, and finishing in the north near Astoria right on the Columbia River. We decided on a week to hike, I blocked it out on my calendar, then got busy and forgot to do anything even remotely related to planning for the trip.

When the three of us arrived in Oregon, it became apparent that each of us assumed the others had been planning. We were unphased and spent the drive south mapping out a location 100 miles (161 km) south of Seaside, which turned out to be Lincoln City. It was a relief to see how adaptable Becca (trail name Little Skittle) and Julia (trail name Rocket) were. Thankfully, these good attitudes set the tone for the rest of the trip. The forecast for the next few days was intimidating, and it was already starting to rain as we locked up the car.

There isn’t a lot of cohesive information on the Oregon Coast Trail. There’s no Guthook Guide, and the “Comprehensive Guide to the Oregon Coast Trail” I found on a crowd-sourced site was…not comprehensive. We wandered in circles in the woods and off the main road, bumping into private property signs and people’s driveways until we finally stumbled onto one of the three Oregon Coast Trail signs we’d see for the next five days. Feeling slightly desperate for guidance at this point, Julia flipped through her apps until she found a little-known app from the UK that featured the Oregon Coast Trail. This would be our way of figuring out where we were going for the remainder of our trip.

While the OCT has a nice overview page, there isn’t a lot of detailed information on the individual sections. Along with this, the OCT is not a straightforward route. Purely by the nature of the terrain and land management, the official route combines long sections of beach hiking with unmarked exit points into some of the 28 coastal towns along the route. If you miss these points, you end up running face-first into cliff drops, high tide, and impassable marshes. Along with beach walking, the route traverses dramatic cliffs and skirts the sides of the humble peaks along the coast—with views of the towering rock formations the Oregon coast is known for. We were awestruck by the crashing waves visible through breaks in the old-growth forest, and we hiked until dark under yards of moss swaying from the branches.

As darkness fell completely at 5 PM (thanks to daylight savings time!) we found ourselves on the shoulder of a busy highway, trudging along in rain that fell in sideways-slanting sheets. I blinked water out of my eyes as Julia put her headlamp on backward to alert the cars as they blew by at 70 mph (113 kph), spraying us with freezing, gritty highway water. As Becca dug through her pack pockets, she realized she didn’t have her headlamp—it was sitting in her car, still plugged into her charging port. Mine was a dim 200-lumen headlamp with less than an hour of battery life, and a button I could barely manipulate with my frozen fingers.

If you’ve never walked along a highway in the pitch dark in the pouring rain, then taken an exit (on foot) alongside semis before crossing over another two lanes of interstate traffic to find a trailhead, then I don’t recommend it. I don’t regret the experience per se, but it definitely wasn’t at the top of my bucket list.

Once we found a signed section of trail, we walked into the woods in a downpour that was now somehow coming down even harder. The hood on my raincoat kept slipping back and pouring water down my back. We were climbing over downed trees and pushing through overgrown ferns that slapped water in our faces as we stumbled along the trail. Every time I climbed over a jagged pile of branches, I turned around to point the light at the mess so Becca could climb over. Julia had the worst travel day out of the three of us—she’d been awake for 20 hours at that point and was desperate to pitch her tent. We looked for a place to camp, but the woods were so dense that there was nowhere to even step off the narrow trail—forget about enough space to pitch three tents.

Finally, we stopped, breathing hard at the top of a slippery, muddy climb.

“No one is hiking this trail right now,” Julia said. “If we camp on the trail, literally no one will come by.” It was dark, 38 deg F (3 deg C), and pouring rain. We agreed immediately and willed our frozen fingers to snap poles together and pitch our tents as fast as possible before the interiors were soaked beyond salvation. Becca and Julia were lifelong trekking-pole-shelter users, but had purchased freestanding tents for the OCT for potential beach camping. Pitching a new style of tent on the trail, in the dark, in the rain, was a train wreck, and I might have been able to help, but I was also failing in a spectacular fashion with my new tent.

The rain was coming down so hard that I panicked. I wanted to pitch my freestanding tent as fast as possible. I was in such a rush that I forgot to hook the tent to the top of the poles, creating a sad pyramid that drooped over my head and soaked my sleeping bag within an hour. I tied the vestibules to nearby branches and dove into the tent, stripping my soaked layers and curling up in my sleeping bag to gnaw on a block of cheese before passing out before 7 PM.