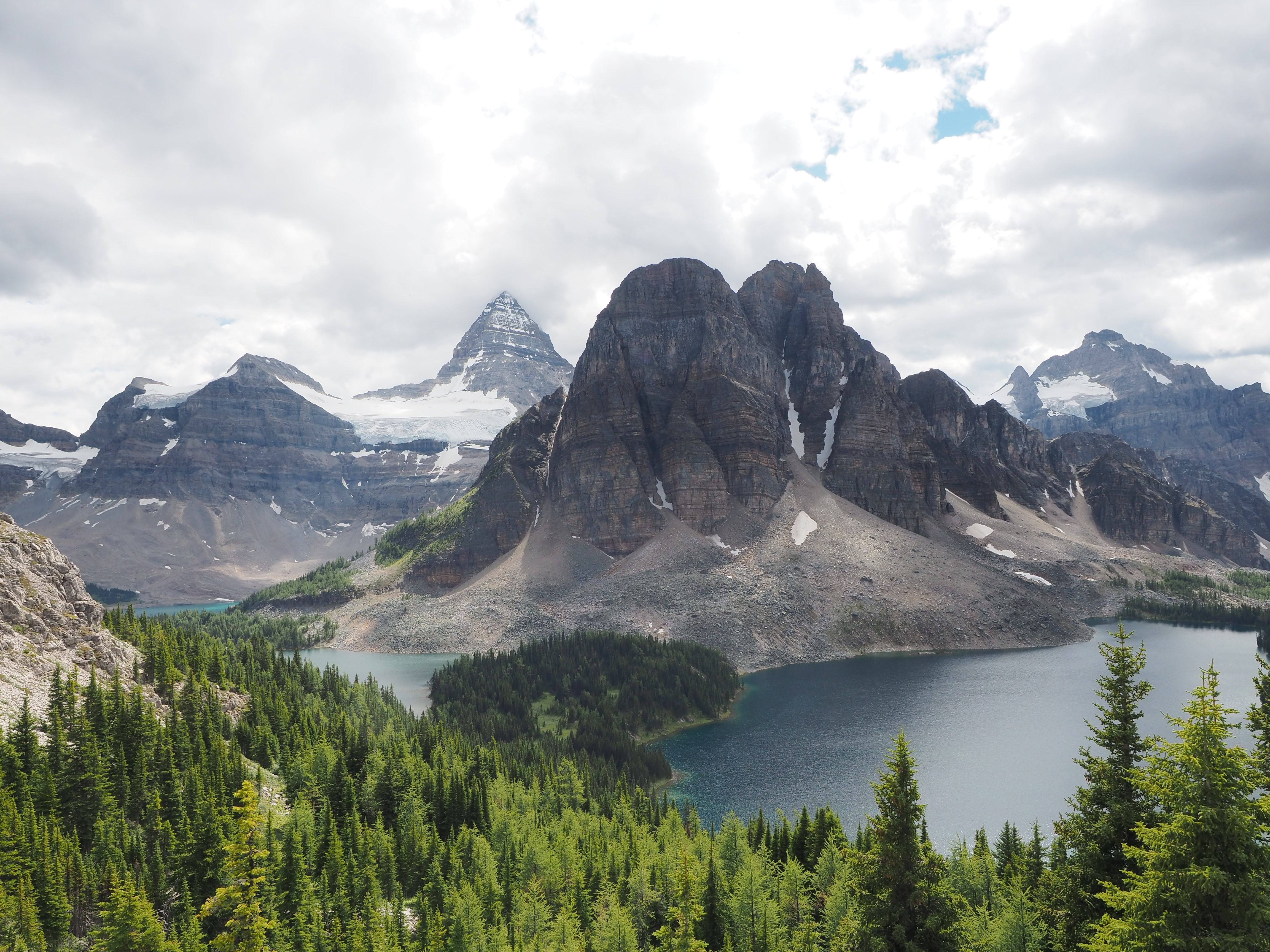 Introduction: “No Room at the Inn”

The six-hour drive from Radium (British Columbia, Canada) to Red Deer (Alberta, Canada), started what would be a string of unexpected incidents during a recent trip to hike the Marvel Pass Backpacking Trail (see Part 1 here to read about my preparations for this trek).

We leave Alberta at 6 PM, and arrive in Radium shortly after midnight. Our previous online booking of a local hotel failed: neither of us had a room, and most of the nearby hostels, campgrounds, and hotels are booked.

Finally, we locate the Gables Motel which has one double room left. Shortly after 1:30 AM, I am struggling to arrange my gear to be ready for an early morning. Consequently, I realize that no matter how long I stare at my gear; I won’t be able to make good decisions without at least a few hours of sleep.

I settle into my half of the motel room, and sleep restlessly.

The alarm goes off at 6 AM.

The Bridge, Sort Of

After a few short hours of sleep, I make my final gear selections and Tetris (that’s a verb) four days of food and gear into my 43L pack. I eat breakfast quickly.

Driving rain escorts us up mountain highways and logging roads. We are stopped by a bridge which has seen better days.

After a short discussion and consulting the map, Craig and I decide not to cross the bridge in the truck. We are hours away from cell service on a rarely used road, and the risk of a disaster is not one we are willing to take.

An extra kilometer or two won’t make too much difference to our feet, will it? At 9:30 AM, we park the truck and begin our trek up the road. Dark clouds and fog threaten as sprinkling rain dusts our footsteps.

Unfortunately, we underestimate the distance between the dilapidated bridge and our trailhead – what we thought was only one or two kilometers turn into more than 6 km (4 mi). After leaving the B.C. Forest Service trailhead sign, we follow cairns down into the creek drainage.

An impulsive buy of a Bluetooth speaker (the Buckshot 2.0 Speaker) which is synced to my cell phone and playing music, now seems like a godsend for letting dangerous wildlife know we are here. The remoteness of the Marvel Pass Trail means that no trail users will hear my music. It seems like a low-impact / high-reward piece of gear to bring.

I walk up the creek bottom in rain, heavy fog, and cold. With no views of surrounding peaks, this results in challenging navigation and drudgery. The only solace for these first five hours is the cheerful sound of burbling Aurora Creek. 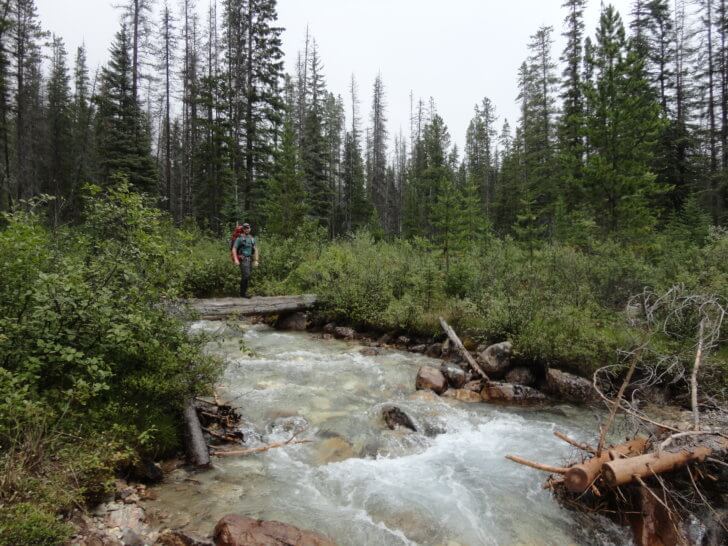 I wonder how the surroundings look when not enshrouded in this ethereal, yet sinister mist. The mysterious forest feels close, but the mist conceals its secrets. Game trails carry me through buffalo berry and spruce. They clamor for my body and pack as if trying to hold me fast and prevent my escape.

At 2:30 PM, we have a break in the rain. The fog remains, but is lighter, and reveals the steep faces of nearby peaks. We follow occasional cairns through talus and scree and claw our way upward into an alpine valley.

When we drop into the little basin near Aurora Lake, swirling mists reveal the outlines of neighboring peaks here and there but keep Marvel Pass obscured.

Marvel Pass is rarely observed by hikers due to its remoteness and prevailing weather. I am disappointed in not being able to see it but am somewhat consoled by the fact that I’d have another opportunity on the return hike out.

In the distance, a cougar shrieks. Consequently, I am compelled to put more distance between me and the direction from which I hear it.

We drop gradually through alpine meadows to the marshland surrounding Aurora Lake.

We observe bear sign: uprooted clumps of earth and stumps, scat piles (containing berries and fur!), and disconcerting warning signs posted by the land management agency to alert hikers that they’re not in Kansas anymore.

Disturbingly, fresh scat and torn up sod become more frequent as I hike through the marshes, shaking my nerves.

I check the time: it’s 3:30 PM. We have been pushing for six hours at a rigorous pace and haven’t stopped for more than a couple of minutes since we left the truck. We need to refuel and rest. Unfortunately, our concerns about the Marvel Pass Trail become more real. Of note, we discover that the trail route has been altered by last year’s flooding and the pass is much farther away than what my three-year-old map reveals.

Aurora Lake is basked in sunlight and seems like a lovely place for a camp.

However, because of bear activity here (it feels like a hostile environment, and it’s unsettling), I know that I just need to refuel and trudge onward to the Marvel Lake campground, where there will be more hikers and fewer bears.

I don’t know what the route ahead has in store. How much has the Marvel Pass Trail changed? Furthermore, my boots are soggy and my clothes are damp.

Once past Aurora Lake, the Marvel Pass Trail becomes unrecognizable.

At times we are uncertain if we are on game trails or the designated trail. On a few occasions, we circle an area for several minutes trying to find the route. After some time, my confidence grows because we find signs marking the boundary between the Kootenay Land District and Banff National Park.

After one sign, we descend a steep slope via switchbacks towards Owl Lake. The switchbacks aren’t on the map.

A large animal has crashed down these switchbacks before us, leaving bent and broken branches in its wake. Bear scat halfway down the switchbacks reinforces my suspicion about this animal’s identity.

Seeing Owl Lake is temporary relief. It is now 6:30 PM.  If my map is accurate and the trail conditions are good, we have at least three miles to go.

Then, looking down, I see the track in the mud.

Exhaustion and nerves are a bad combination. Additionally, I am running low on water, and I have not eaten enough calories. Consequently, every stop we make is short. Keeping an eye out for a grizzly bear in the fading light does nothing to whet my appetite.

According to my map, the distance from the Marvel Pass Trailhead to the Marvel Lake Campground is 17.1 km (10.5 mi). However, our “GPS distance tracker” says we have already covered more than 21.8 km (13.8 mi), not including the extra 5 km (3 mi) we walked from the dilapidated bridge to the trailhead.

I want to rest, but I know there is a bear nearby!

I stop long enough to shovel high-calorie snacks into my mouth, but not a moment longer. Meeting a bear in the dark is not a prospect I want to think about. Craig is in a similar boat; he hasn’t been hungry either.

The Sum of All Fears

I stumble along behind Craig through a forest. He’s on bear watch.

Several hours earlier, we started taking turns walking in front and being hyper-vigilant to give one of us a mental break and maintain a higher level of alertness overall.

Suddenly, Craig yells and stumbles backward into me. I don’t know what grabbed him, but I let loose a blood-curdling shriek.

Fortunately, helpless laughter replaces my death cry. The sound of a large partridge flapping its wings reaches my ears.

“If you tell anyone this, I will swear it was the size of an emu and had talons and razor sharp teeth,” Craig says. Obviously, he is less than amused.

“I’ll back you up on it buddy, don’t worry,” I say, while still chuckling.

For the record, the partridge was the sized of an emu with talons and razor sharp teeth.

Unfortunately, the sun is setting. Consequently, my mirth and teasing went silent.

My water bottles are empty and I don’t feel like taking the time to fill up and treat water.

Instead, I quicken my pace.

By now, we should only be a few miles from the Marvel Lake Campground. Again, I push my pace. My enthusiasm pays off, and we soon cross the not-so-dilapidated bridge at Bryant Creek.

“Through a Veil, we See Dimly.”

Crossing the Bryant Creek Bridge leaves us stumbling and utterly lost in the dim light, and the trail disappears.

First, we hike in the direction we know should take us towards the Marvel Lake Campground and it reveals nothing but thick brush and creek tributaries. Craig falls headlong into a small brush-hidden tributary bed. He feels the grinding of bone on bone, accompanied by stabbing pain in his knee.

Somewhere in the fog of fatigue, I know I am making irrational decisions. Then, I make an executive decision: I will not trail blaze in the dark. Craig knows my logic is sound and hands over the lead. His fatigue matches mine and his knee pain intensifies with each step.

Then, we retrace our steps to the clearing where the trail disappeared. Searching in the dim light reveals nothing which resembles a trail. I can see where the creek bank has washed out and likely taken the old trail with it.

Methodically, we walk a short distance in each direction from the creek and attempt to locate a trail.

A straight northward shot toward the Bryant Creek Trail reveals nothing but dense trees.

Now on the trail, darkness has fully set in. Craig’s headlamp malfunctions and we are left to navigate in the dim light provided by a single lightweight headlamp. Fortunately, this trail resembles a hiker highway, and it does indeed lead to the Marvel Lake Campground.

Craig checks his GPS tracker: we hiked 35 km (21 mi) today, and haven’t seen a single human since we left the truck.

We fumble with gear in the dark, hang our bag of food on a bear pole, set up the tents, and call it a day.

Join Emylene and Craig on the second day of their adventure in Part 3!