You are here: Home / News / Essays and Commentary / Learning Curve: What I Learned From Taking a Beginner into the Backcountry

Backpacking has a lot of wonderful attributes, including that it’s one of the least technical outdoor activities you can do while still being deeply immersed in the mountains. Backpacking is more involved than a day hike, but it’s not as complex as mountaineering or climbing. If you can walk, know where you’re going, and carry the bare minimum to spend the night outdoors, you’re going to be ok.

I might have more backpacking miles than my friends, but they are all capable and experienced outdoorspeople. The most I’ve ever had to do was help them set up a borrowed tent or explain the benefits of carrying a lightweight bottle instead of a Nalgene. But I’d never taken someone out who had never slept in a tent or spent the night outdoors. 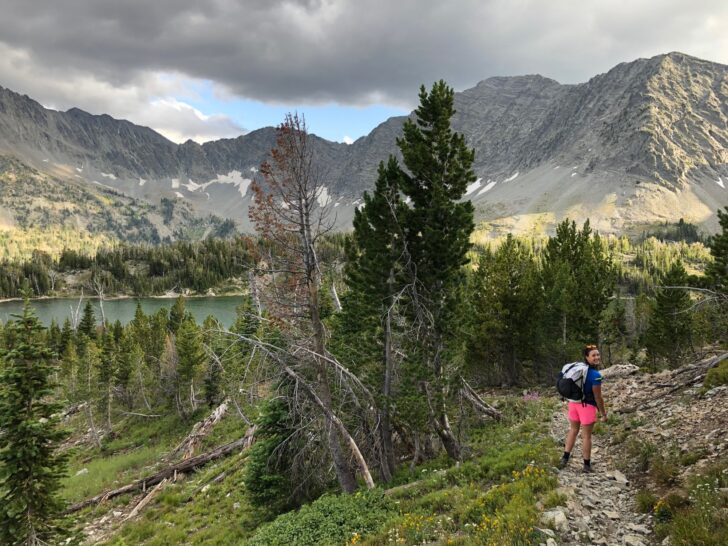 Taking beginners out isn’t my forte… it’s something I’m trying to get better at. Photo credit: Maggie Slepian

We’ll call this bare beginner Jewel. She spent most of her time bouncing between LA and Las Vegas, but last summer, she spent a week with me in Montana as part of a work project. Jewel was in great physical shape, loved being outside, and was an advanced yoga instructor. She kicked my butt on a few day hikes and was excited to go on her first backpacking overnight with me during the trip.

I chose my show-off hike: an overnight to a picture-perfect alpine lake in a mountain range a few hours from town. The hike to the lake was only about seven miles, but the trail was varied and picturesque. It climbed steeply through the woods, crossed several deep creeks, traversed open meadows before switchbacking up a pass to views of the lake below. It’s one of my all-time favorite overnights in Montana, and the one I always take guests on.

I invited two friends along with Jewel and me. I knew she was fit, but I was also aware that she’d never spent the night outdoors or carried a loaded pack. Additionally, I knew my own limitations. I am simply not the best at being a guide – I love taking people out, but I also understand that I can be oblivious to skills and tips that probably should be explained.

Before she showed up, I had sent Jewel a detailed list of the backpacking gear she should buy. She showed up to my house with the exact items – the inflatable sleeping pad, off-the-shelf 55-liter pack, 20-degree mummy bag, 300-lumen headlamp, and a lightweight set of carbon trekking poles. Despite trying to convince her to wear trail running shoes, she insisted on beefy hiking boots straight from the box. Once I saw the boots, I also made sure she packed a few pieces of Moleskin. 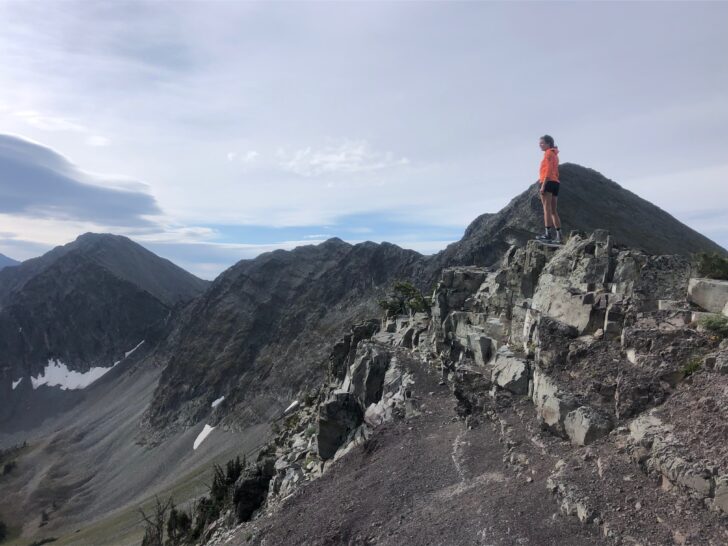 We packed our bags while waiting for Hailey and Claire to show up. I explained the concept of leaving some items behind for an overnight. We didn’t need a full pack of face wipes, hard cases for different items, a full sunscreen, or the aerosol bug spray. I left her with the “nope” pile and went to go meet Hailey and Claire downstairs.

When Jewel came down, her bag was several pounds heavier than when I’d left it upstairs.

“What’s in this?” I asked, digging through the bulging pockets. She’d put back most of the items I’d taken out. I told myself it was fine. She was in very good shape and the hike wasn’t too strenuous.

For me, the learning part of this outing meant truly understanding what it meant to be a real beginner. Not just a first-time backpacker, but someone who had never had a real backcountry experience. Jewel was enthusiastic and in shape, but she came from a realm far from the outdoor recreation world.

At the trailhead, I threw my pack on and started walking away from the truck, expecting Hailey, Claire, and Jewel to fall in line. Hailey tapped me with a trekking pole. Jewel was still at the truck, struggling with her pack. I dashed back and helped her adjust the straps and buckles, marveling at how complicated the adjustment system is on a fully-featured backpack. From the different connections, to cinching, to fit, to packing method… a lot goes into something as simple as throwing a pack over your shoulders. I’d taken this skill for granted for years, mindlessly adjusting tension, slinging it over my shoulder to grab something from the outside pocket. The buckles, straps, and keepers made sense to me, but with Jewel, I was seeing it in a new way.

We moved at a great pace up the trail and through the meadows. At the base of the pass, we stopped to marvel at a family of mountain goats picking their way over the scree above us. We stopped for photos at the top, then descended the switchbacks to the lake. Hailey and I picked our way across a steep, slippery patch of snow still clinging to the north-facing side of the basin. It obscured the trail, and we kick-stepped carefully, aware that one stumble or slide would send us tumbling down the steep, loose face. Claire was more tentative and took a good amount of coaxing across. Jewel, for whatever reason, found it hysterical and ran across the slick snow, despite me shrieking about a high-consequence fall. She giggled when she reached us, and I had to remind myself to calm down. Risk and consequence mean something different to everyone, and I tried to convince myself she’d been sure of her footing.

At camp, I helped Jewel with her new tent and we took photos by the lake. When it was time for dinner, I realized another thing: I never cook in the backcountry, so while I’d told her to buy a stove and fuel, I had forgotten to tell her to bring a lighter. A lighter was simply part of most people’s backcountry items, and I’d totally spaced it. Luckily Claire had a spare, so we could ignite Jewel’s stove and figure out dinner. Hailey showed her how the new valve worked on her sleeping pad, and we were good for the night.

Everyone was in great spirits, and the basin was as stunning as ever. The weather was perfect as well – high 60’s F (16 C) during the day, which then meant low 30’s F (-1 C) at night. This was something else I hadn’t mentioned to Jewel – we were at a higher elevation, and the temperatures could get colder than expected once the sun went down. Part of her pack list was a set of base layers and the requisite puffy, but I hadn’t mentioned that you needed to sleep in those items if it got cold.

Jewel was really smart. She had her MBA from a prestigious business program, and picked up on things quickly. But for someone to pick up on something quickly, you need to impart the relevant wisdom. That’s where I fell short. Jewel slept in shorts and a t-shirt at home, so that’s what she wanted to sleep in outdoors. It didn’t occur to her to put on more layers. After a great night’s sleep for me, Claire, and Hailey, Jewel said she’d loved being outside, but admitted she’d been too frozen to get any sleep. 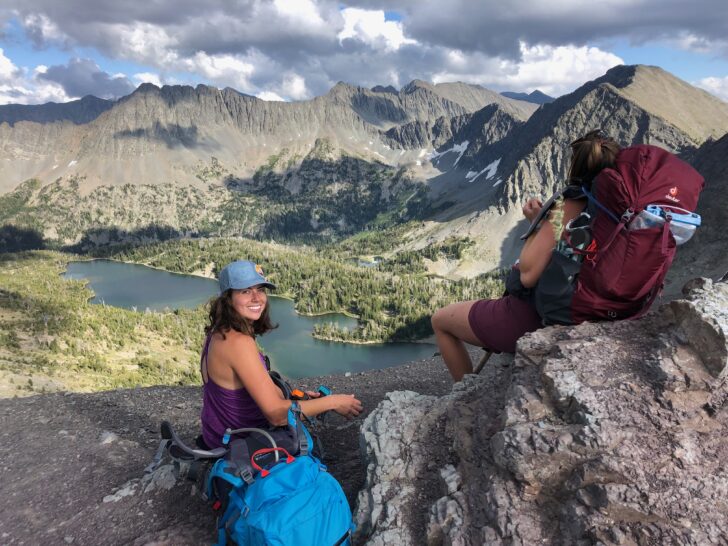 Stopping for some photo ops after a hefty climb. Photo credit: Maggie Slepian

“Why didn’t you put your jacket on?” I asked, helping break down the tent.

“What do you mean?” Jewel asked, “I never sleep in a jacket.” I felt like an idiot. She was still in a great mood, despite not having slept because she was a veritable popsicle. If I’d just mentioned that she could wear a jacket to sleep in, that wouldn’t have happened.

She also had thumb-sized, oozing blisters on her heels from the hiking boots, but the application of Moleskin quickly solved the issue. I gave her careful instructions about digging a cat hole, where to use the bathroom away from water sources, and to pack out all trash, no matter how gross. She was attentive and respectful of my ramblings, and after a quick lesson on stuffing a sleeping bag into an impossibly small stuff sack, we were on our way.

Jewel was sore from carrying her heavy pack, but she never complained. Hailey gave her pointers for using the trekking poles to descend the pass, and once again, the weather was incredible. On the drive back, my three companions gushed about the hike, the goats, the lake, and the campsite. I was quite pleased. My go-to overnight had once again proven to be a stunner, and climbing a dramatic pass to camp at an alpine lake is as memorable a Montana adventure as it gets. 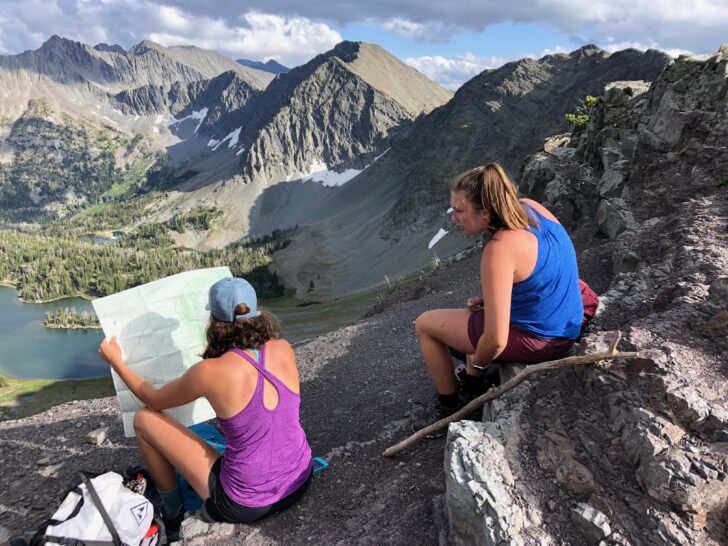 Even if you know where you are, it never hurts to be oriented. Photo credit: Maggie Slepian

It was my first time taking a bare beginner out, and I can confidently say I learned more than I anticipated. There was a vast difference between someone who had never spent time in the backcountry and beginner backpackers who had experience in other forms of outdoor recreation. From understanding how to put a pack on, to the idea of layering for sleep, there was a lot I hadn’t considered. I was grateful to Hailey and Claire for reminding me to check on Jewel, and grateful to Jewel for her unfailing good attitude.

And the last thing? The day after we got back, I yelled upstairs to Jewel to ask her if she wanted me to take her sleeping bag out of the stuff sack. Her packed bag was still sitting in my living room.

“Sure,” she called downstairs, “but beware. There’s a giant turd in a ZipLock bag in there too…I packed everything out.”

Home › Forums › Learning Curve: What I Learned From Taking a Beginner into the Backcountry