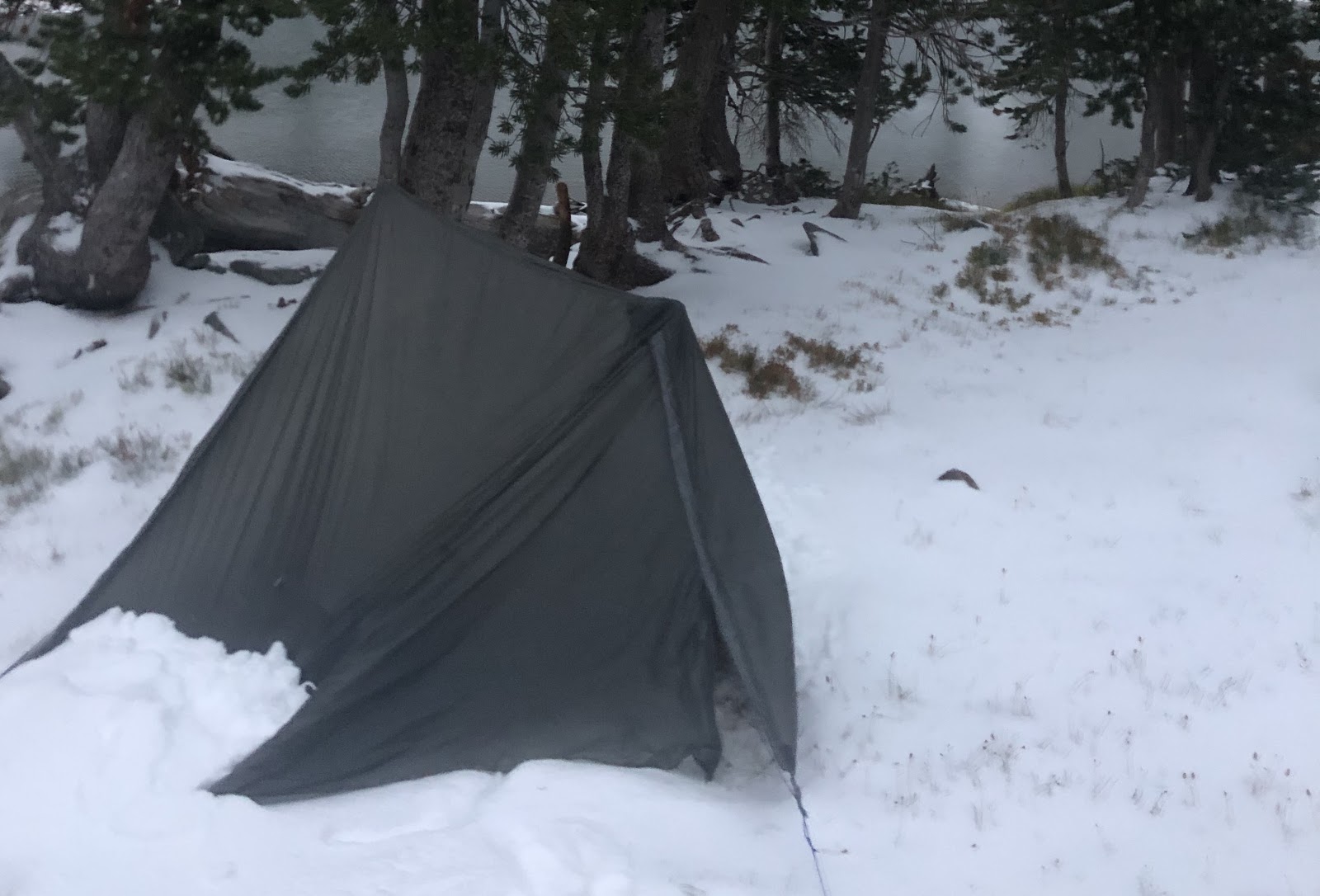 Learning Curve is a monthly column by outdoor journalist Maggie Slepian which will examine human-powered outdoor adventure through the lens of beginners. How do beginners learn our sports? What pitfalls do they face? How does mentality shift through time? And how should experts treat beginners? The Learning Curve will cover all this, and more. Got suggestions? Drop Maggie a line in the comments.

It was 60 degrees (15.5 C) and sunny when I left my house at 2 PM on a lovely autumn day. By the time I reached the trailhead 90 minutes later, it was down to 50 degrees (10 C), but still sunny. The forecast for town was partly cloudy, but the temperatures through the next day looked promising, and I didn’t dig any deeper. Did I check the radar to see the mountain forecast? Nope. If I had, it would have shown me the weather wasn’t going to stay as glorious as the pristine early-autumn day would lead me to believe.

Anyone heading into the mountains during the shoulder season in the Northern Rockies should be prepared for a drastic change in conditions, whether or not the forecast shows it. Am I a prime example of intelligent preparation? Obviously not, but it doesn’t mean I can’t dole out advice and provide cautionary tales from my own shortcomings.

I had made the spur-of-the-moment plan (with myself) during a morning coffee-shop shift. My partner was out of town, as was apparently every other person I know. I could either drag myself on another depressing day hike and wander around my house alone, or I could haul ass to my house, pack my bag, and make it to the trailhead within two hours of clocking out at the cafe. A friend had mentioned an alpine lake I’d never been to—and there’s nothing more enticing to me than an alpine lake I’ve never been to.

So I rushed home, moved the pile of backpacking gear from my floor back into my pack, and decided this would be a great chance to test out my new shelter—making this the second time in my life when I would attempt to set up a trekking-pole tent. At the last minute, I threw a beanie into my bag, briefly considered gloves before deciding the two ounces (57 g) seemed too big of a sacrifice—and left my warmer sleeping bag in the closet because it was too bulky. I charged my headlamp in the truck, and before I lost service, I downloaded a Gaia map for the area—just in case.

Instead of checking the forecast and then changing my plans, packing different gear, or—I don’t know—taking a tent that I knew how to set up—I did none of the above. I happily trotted alone into the Crazy Mountains with a lightweight three-season backpacking system and a new shelter that not only had I never set up—but I also never watched even a 60-second instructional video on how to pitch. Smart!

I did throw down a few waypoints on the map as I hiked since that strategy had come in handy on other solo outings on new trails.

The lake was gorgeous, and the weather was perfect when I arrived. Within an hour though, the temperature had plummeted, and I had put on every layer I’d packed, including the beanie. As the temperature continued a stressful downward spiral, I started to pitch the trekking-pole shelter as fast as I could, which was fast at all. My hands were freezing at that point (no gloves, remember?). While the shelter was straightforward to pitch for someone experienced with trekking-pole shelters, it seemed to me like it required an advanced engineering degree. I was used to a single-hub, freestanding tent that went together in two minutes and just needed a few stakes.

Speaking of stakes, I hadn’t counted mine. For a solid pitch, the shelter required ten stakes. I had only six. I managed to get the tent mostly upright, and pulled the guylines out as far as I could before dropping massive rocks on top of them, making the walls somewhat taut as the wind picked up and blew icy air across the lake. While I was very confused by my trekking-pole shelter, I have significant backpacking experience with my normal setup. I knew the broad walls of the shelter were going to be buffeted by whatever the hell was blowing in with the dark clouds gathering over the edge of the basin.

As it got dark, the wind picked up, even more, slapping the walls of the shelter into my face. The tent collapsed twice, and I crawled out of my not-warm-enough sleeping bag, shivering, and restaked it while cursing my lack of preparation.

The wind howled throughout the night, and the echoing tap—tap tap—taptaptaptaptap meant something was falling from the sky. Rain? Sleet? Had it gotten cold enough to snow? I stared at the billowing shelter walls and watched my crooked trekking-pole supports wobble in the howling wind and thought, “I don’t care what it’s doing out there, as long as this tent stays up and I don’t have to go out there and fix it.”

I must have fallen asleep despite the wind and precipitation, because the next thing I knew, I opened my eyes to dim morning light and something dense on top of my head. I sputtered and sat up, blinking at the sagging walls. The tent had somehow stayed upright despite the weather and my awful pitch, but was completely bowed in at the sides from piles of snow. That’s what was on my head. The tent had sagged enough that the headwall—and pile of snow on the outside—had fallen directly onto my face. I checked my watch—It was 7 AM—enough light for me to make moves back to the trailhead.

I wore all of my layers as I stuffed the tent and my sleep system into my bag, hanging the pack on a branch to keep it off the snow that now covered the ground. The wind and snow had stopped, but everything was blanketed in white. I had no idea where the trail was, but I shouldered my pack and took off in the direction of the drainage. I had slept with my phone inside my sleeping bag, so it didn’t freeze and kill the battery. I pulled up the map with my marked waypoints and angled the direction of travel towards the closest one. I was off the trail for about half a mile, then found a faint dip in the snow cover that meant packed dirt. I hurried down, dropping elevation quickly, but remained in snow, sliding across icy rocks for over an hour.

By the time I made it to the last section of the trail, the sun was out, and the snow at the lower elevation was melting quickly. I stopped to snap photos of the gorgeous light peeking out from behind snow-capped peaks, and made it back to my truck in just a few hours.

Overall, it was a poor choice to head into the mountains—even to 9,000 feet (2,743 m)—without verifying the conditions. The weather is going to look very different in a mountainous basin than it does in the surrounding valleys, and it was my fault for dismissing that fact. However, I have done enough backpacking in shoulder seasons (and winter) to avoid feeling panicky. A down jacket and a 20-degree (-6.6 C) sleeping bag are the two things I always pack—and when used together I feel comfortable down to 10 degrees (-12 C). I might not have known how to set up my shelter perfectly, but I knew enough to get it to a point where it would stay standing and provide protection. And while I was unfamiliar with that lake, I understand the topography of that area enough to easily find my way out. There was nothing technical about the trail, and following my waypoints on the way out proved simple.

No matter how experienced you are, it’s always better to be completely prepared. While I can figure things out on the fly, despite not having the best gear for the scenario, I need to remember to take a few extra minutes before each trip to completely set myself up for success.