You are here: Home / Articles / Jeff Garmire is Attempting an Unsupported FKT of the Colorado Trail

Jeff Garmire is Attempting an Unsupported FKT of the Colorado Trail 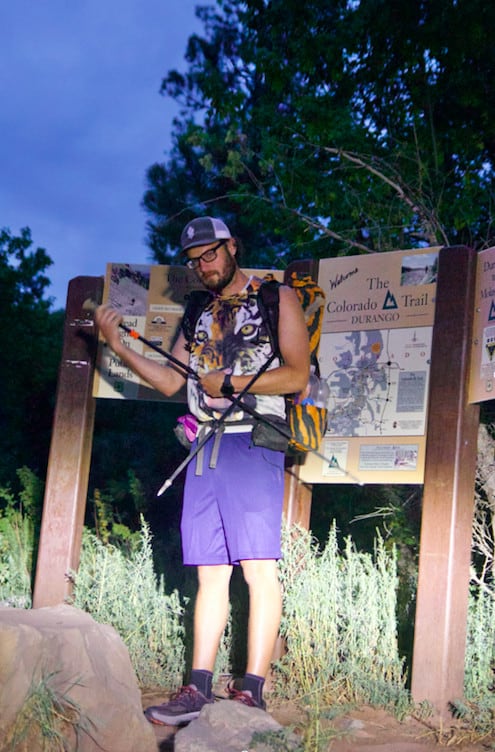 At 6:30 am US Mountain Time today, Jeff Garmire started an unsupported FKT attempt of the Colorado Trail (related forum thread). Jeff is hiking from west (Durango) to east (Denver).

Jeff elected a W-to-E strategy in order to get the more challenging San Juan section out of the way on fresh legs (albeit with a heavier pack).

This is particularly notable because it’s an unsupported attempt – Jeff is carrying all of his food and gear for the 485-mile trail on his back. There will be no resupply or other outside support.

In 2004, Demetri “Coup” Couponas became the first (known) person to have completed an unsupported attempt of the Colorado Trail. He completed it in about 20 days, which wasn’t exactly a race pace, but it set the bar.

The current unsupported record is held by John Zahorian, founder of Pa’lante Packs. John’s record, established in 2016, is 9d 12h 32m. He traveled east to west. A claim on John’s record was made by Bronson Hargreaves in 2016 for 8d 18h 17m but is not recognized by the FKT community due to incomplete tracking information.

Jeff chose the Colorado Trail because there were so many things that didn’t happen this year. He had big goals (PCT FKT, AT FKT, Barkley Marathons) that were crushed by COVID, so he recalibrated and started training again a few months ago without a real goal in mind other than he wanted to go after a prestigious trail record. The Colorado Trail made sense in the amount of challenge it presented with elevation gain and distance, as well as adding the challenge of doing it entirely unsupported as both an extra challenge and pandemic precautions.

In addition to the obviously physical and mental challenge associated with a hike like this, energy management and figuring out how much food to take is critical.

At 485 miles with 75,000 feet of elevation gain, the Colorado Trail has an energy-mile equivalent of about 605 miles. If a hiker expends about 200 Calories per energy-mile, you’d be looking at more than 120,000 Calories required to complete the CT (not including basal metabolic needs at around 1,500 to 2,000 Calories per day).

Highly-trained athletes undergo extensive training in order to minimize the “number of Calories per mile”. So getting this number down to 150 would be entirely reasonable – for a long-distance hiker. But this is an FKT attempt, so additional fitness is going to be invested into additional speed.

Jeff’s starting pack weight is about 30 pounds, of which 18 pounds or so is food (his average Caloric density came out to around 150 Cal/oz). He budgeted about 5,200 Calories per day for 8 days and 4,000 for a ninth day. That’s 45,600 Calories, or 75 Calories per energy-mile. That’s a razor-thin margin that will require a careful balance of minimal sleep with maximum time on the trail. Such is the nature of modern-day FKT attempts on major trails like this.

So with Jeff carrying 45,600 Calories, that means he may need to make up 70k or more with body fat reserves. That could be up to 20+ pounds of body weight (less if he moderates his pace), depending on how efficiently he can burn fat vs. muscle. Jeff is highly trained, and lean, so he won’t have access to much more than that. If he moves too fast (too many Calories per mile), he’ll run out of body fat. If he moves too slow (higher basal metabolic load), he’s going to run out of food. This topic is addressed in more depth in Roman Dial’s How Far, How Fast, How Heavy: Calculating the Range for Unsupported Long-Distance Hiking.

The Colorado Trail climbs more than 75,000 feet of elevation as it traverses eight distinct mountain ranges. Its average elevation is more than 10,000 feet. Modern FKT attempts are enormously challenging and debilitating. Coup lost 25 pounds on his 20-day unsupported CT hike in 2004. Paul Pomeroy – a highly-trained athlete – lost 16 pounds on his 9+ day unsupported FKT in 2006.