My intention was to link the most active volcanoes of the island. I would travel 410 miles on my fat bike, carrying all of my own food and gear, combining mountaineering and fat biking in the traverse.

This article provides accompanying information to my film volcanofatbike, which documents my attempt to cross Iceland by fatbike. 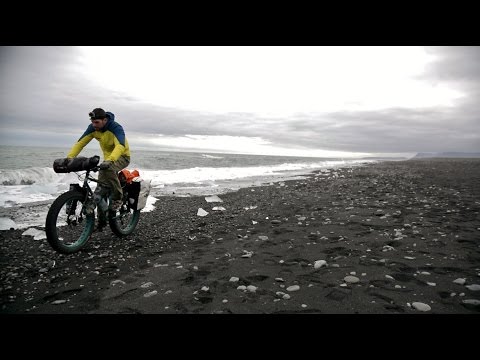 First of all, let me introduce myself a Little, I’m Gerard Anton (b. 1984) a dentist from Barcelona, I love mountains, outdoor sports, photography, travel, and adventure.

My backpacking background is:

I started participating in adventure races in 2002 and I’ve been competing in mountain sports since then as well. In 2014 it first time in Iceland. I hiked the Laugavegur trail and I fell in love with the country. I knew I had to come back to do something more than a hike, so I researched quicker, but still lightweight alternatives to backpacking and began purchasing gear for this next adventure.

I noticed my first fat bike in Spain in 2013. I had never tried one but thought that their ability to navigate in snow was an advantage for some expeditions, and in particular, I had Iceland in mind. Iceland has some of the biggest glaciers on the European continent, including the Vatnajökull (Europe’s second largest glacier, only behind the Svalbard Glacier). It is often crossed by 4×4 off-road vehicles and skiers with pulks training for polar expeditions. So why not follow their tracks via fatbike?

My intention was to link the most active volcanoes of the island. I would travel 410 miles on my fat bike, carrying all of my own food and gear, combining mountaineering and fat biking in the traverse. The first difficulty that I found was the lack of information on the glacier crossings and mountain weather in these regions. It seems that not many locals travel that deep into the mountains of the region.

I arrived in Reykjavik on July 15th. As I stepped into the airport I saw a television showing closed roads and blizzard conditions in the mountains. I asked some people in Reykjavik, and 2015 had been one of the coldest year of the last century. I started the route in a black sand beach near Skogafoss, on the southern side of the island. There is a crashed Super Douglas DC3 US army plane near that location. The crew all survived the impact, but the plane was abandoned rather than recovered, meaning the weather-beaten remains are still standing at the crash site.

The early miles of the trek are relatively easy until Skogafoss. From there I had to push my bike up a hill, gaining 3950 ft (1200 m). It took the whole day. The snow did not take long to appear as once I passed 2000 ft (600 m), I saw it for the first time of the expedition. It was wet and heavy snow, formed by a light mist and warm temperatures, that made pedaling nearly impossible. I spend the rest of the day pushing my fat bike up to the pass between the Eyafjallajökull and Katla Volcanoes.

Attempts on the Eyafjallajökull and Katla Volcanoes

My first goal is Eyafjallajökull (5465 ft; 1666m), the famous Icelandic volcano that last erupted in 2010 put European flights out of their regular flight patterns for 20 days. I camped in snow, but with good weather. Early in the morning, I took my mountaineering gear and began the trek to the summit. There was little visibility due to snow and wind, so I navigated with the GPS trying to avoid seracs and crevasses. Part way up, I realized that snow is covering my footsteps and that I will need to follow my GPS route to return back base camp. After two hours, I nearly reach the summit but was blocked by a large serac that surrounded the entire summit. Just 50m remaining until the summit but I had to go back. I’m not carrying ice climbing axes and crampons, and the serac provided too much of a hazard. As I was going alone, I had to know when to bow to the elements; it is important to know when to say no.

After that, I attempted to climb the Katla Volcano. This one is 11.8 mi (19 km) east of my camp. On my way to Katla’s summit approach, I found a hut with a ranger. Because of the large number of crevasses, he tells me that it is not possible to safely summit alone. Plus, the last two people to attempt Katla in 2012 had to be rescued by helicopter. I decided that it is wiser listen to the ranger and not to tempt fate, so I followed the route back to camp, this time going down to Thórsmörk, and then to Landmannalaugar. This part of the trail is supposed to be very difficult: there is a pass with fixed ropes and some cliffs. I had to be very careful in some sections. The people that I met here were completely shocked to see me with my fat bike in this terrain!

Once in I arrived in Thórsmörk, I spent the night there. The next day I reached Askja Lake, which was covered by wet, heavy snow which forced me to spend thrice the amount of time I expected on this portion of the expedition as I had to push my bike. At times the conditions forced me to take my gear off the bike, push the bike up, and return for the rest of my gear. These tough conditions, combined with two days of rain and snow, resulted in my gear getting wet and I had no opportunities arise to dry my gear nor to recharge the batteries for my Garmin inReach and my camera via a solar panel.

En route to Landmannalaugar, I fell off my bike and lost my sunglasses. Sunglasses are an important piece of gear in a snow landscape as snow blindness is a hazard. I was forced to improvise: I wore my tubular balaclava covering my eyes – as the fabric was thin, I was able to see through it.

Although I was moving slower than I would have liked, I reached the foot of the Katla Volcano. It is one of the most active volcanoes in Europe, erupting every seven to ten years, although since the last eruption was in 1999, it is due to erupt in the near future. The Katla Volcano (4960 ft / 1512 m) is not a technical climb and the primary concerns for those attempting it are those typical of any trek in high alpine terrain. It took me approximately two and a half hours to climb. Due to heavy cloud cover, it may not have been the best day to climb the peak, but I finally did reach the summit.

After two more days of travel, I arrived at the foot of the Vatnajökull Glacier. During peak season, the base camp at the glacier’s foot is usually full of activity, but the winter conditions have made it so it is empty. Also at the basecamp is an Iceland Safe Travel Agent, who, upon listening to my plan tells me that it isn’t possible to cross the glacier due to the high volume of snow and the heavy, wet quality of the snow. It would not be crossable until August. This seemed like the worst news I could hear at this point in the expedition. This was my goal, and I was being forced to rethink my plans.

What could I do now? I could go home, but I had been planning this trip for eight months and I did not want to go home without fulfilling my goal. I decided that to accomplish as much as possible, I should go to the southeast and attempt the highest mountain in Iceland, Oreafajökull (6923 ft / 2110 m). Beginning this leg of the journey was hard – not physically, but mentally. I could not complete my original goal, so the best I could do was to reach the last of the volcanoes I had originally planned to climb via a different route.

After two days of pedaling, I reached the foot of Oraefajökull. The weather was ugly and it was not the best day to attempt to reach the summit. I am on an adventure though, so I hid my bike and began climbing the 2100 meters to the summit. It was long and tough, lacking a path, and covered in snow. After four hours, and walking around two crevasses I had reached the summit.

Return to Civilization and Debriefing the Expedition

I returned to my fat bike and cycled for two days in a headwind until I came to Reykjavik. Looking back at this journey after two years, I find that I have learned a lot about backpacking. Sometimes in your life, you win and sometimes in life you learn. In Iceland, I learned a lot. Vatnajökull lies there, calling me; perhaps I will try to cross it again (maybe in August).

The most important thing in making adventure backpacking successful is preparation. You must go light. But instead of throwing out gear and getting the lightest gear, it is best to jettison the gear that is inessential and not useful. The weather in Iceland is tough, windy, and rainy nearly every day, making durable and warm gear essential, even when trying to stay lightweight.

What Would I Change?

Final Tips for Those Planning to Go To Iceland

I have been to Iceland four additional times since this expedition and I would share the following tips to those who are planning a trip: