You are here: Home / Articles / The Blue Lights of the San Rafael Swell

The Blue Lights of the San Rafael Swell

Sometimes we backpack to get a taste of the unknowable: blue lights and pictographs in the San Rafael Swell. 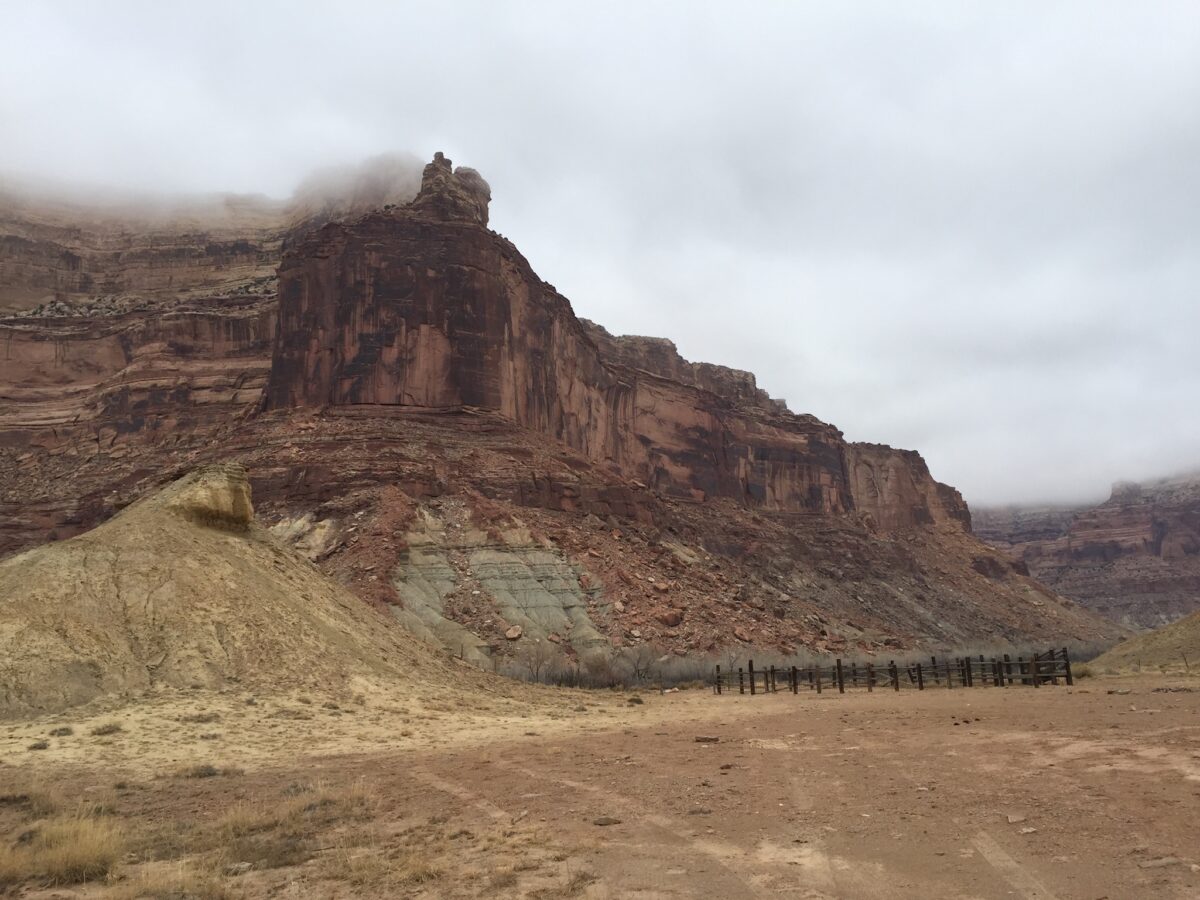 I looked back at the truck one last time, the only vehicle around, sitting in a bare dirt lot by a corral at the end of a long dirt road. Behind it sat two buttes: Windowblind Peak and Assembly Hall Peak, peering down over their kingdom of emptiness. The truck belonged to my good friend Glade, an environmental scientist who was transitioning away from his identity as a songwriter and into the world of packrafting and backpacking. His black truck seemed an object of certainty surrounded by all that mystery. It was certain in its purpose, and being brand new, certain in its ability to transport us there and back home.

The winter desert around it, by contrast, seemed to hold its cards close. When the breeze blew, it seemed to swell with something I couldn’t call life or breath, but couldn’t really call anything else. And when it was still, the desert seemed suspiciously dormant, like it was just playing dead, waiting for us to leave so all the rocks could stand up and resume their party, picking up their weighty sandstone dance where they left off. Almost nothing about the desert was certain to me; I could understand how almost none of it worked. It made me both uneasy and curious. And I say that having spent nearly all of my formative years in the area, scurrying over sandstone like a clumsy lizard.

We were about to enter the San Rafael River corridor, sometimes called the Little Grand Canyon: a 14 mile-long, 1,200 ft deep gorge constructed primarily of columnar, red-orange Wingate Sandstone which, as is often the case, is capped in white Navajo sandstone domes. The heavy, pale gray sky sat on top of all this, drooping over the cliff edges like frosting over the side of a cupcake. I turned away from the scene of the lonesome, black truck, that speck of certainty in a sea of the unknown, looking so small and vulnerable in the vastness of the desert, and feeling just as small and vulnerable as the truck looked, I stepped into the wide mouth of the canyon. This step from the known to the unknown seems to be one of the reasons I go backpacking. Knowable things remain in my pack, of course, but they are few, and their purpose is often to facilitate the observance of mystery.

The trail paralleled the river which flowed low and green between willows which had by then taken on their winter redness. Leafless cottonwoods’ true twisted forms were exposed, reaching one direction then changing their minds and reaching another. It was the kind of quiet that feels like waiting. Waiting for the sky to finally fall all the way to us in the form of snow. Waiting for the held breath of winter to be released. Or just waiting for a sound in the bushes to startle us. We crossed bottomlands of grass and prickly pear and then pushed through black tunnels of tamarisk. The goal was to make it about seven miles to a Barrier Canyon Style pictograph panel we had read about, but winter days are short and we got a late start so we didn’t even make it halfway there before the sun, wherever it was behind all that gray, began to set.

As the light faded, we set up camp below gnarled cottonwoods and started a small tamarisk fire against the cold. Late in the evening, a headlamp appeared downcanyon, flickering through the willows and tamarisks and then heading in our direction. As they came closer, this still-formless human crunched through twigs and frozen grass and took in deep breaths of cold winter air, their headlamp landing on us where we sat. Finally stepping into the ring of light cast by our fire the man became fully formed. The headlamp had been guiding a man in his 50s wearing a large multi-day backpack and a look somewhere between disdain and astonishment. He told us he was from the area and expressed genuine surprise to find anyone else out backpacking in the cold. After exchanging a few more brief words with him he went on his way, walking by the light of his headlamp up-canyon into the winter dark.

The next morning Glade informed me that something weird had happened during the night.

Home › Forums › The Blue Lights of the San Rafael Swell