You are here: Home / Articles / Going Home
Article: Going Home Back to top

The transitions from the simple discomfort of the trail to the chaotic comfort of life at home happen by degrees. What can I learn from the trail that will allow me to experience home life in a new way? 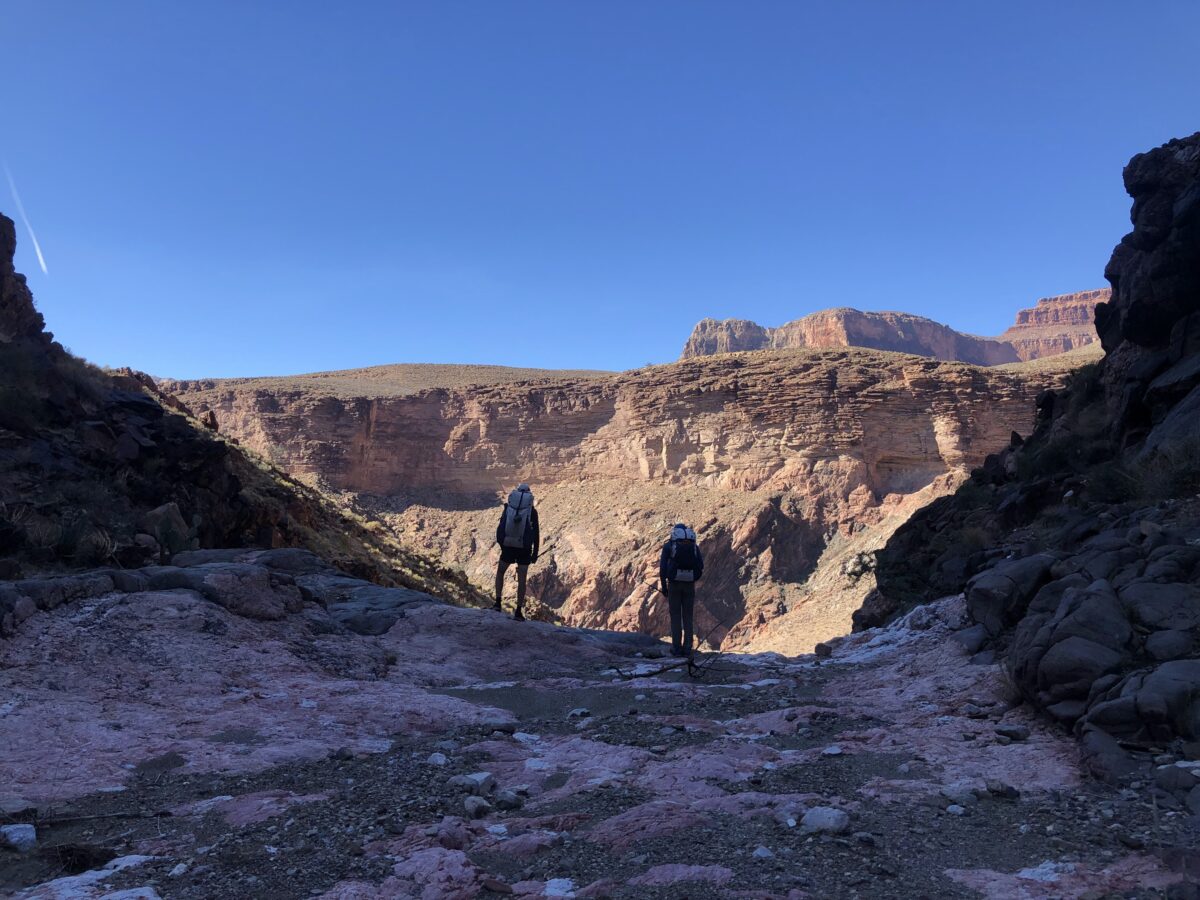 Reemergence Into the Human World

The first reemergence happened when we reached the mouth of Phantom Creek after a morning of cold swimming and precarious scrambling. Ahead I could see something unfamiliar, a retaining wall supporting a flat, smooth trail. It was the first human-made thing aside from distant helicopters that I had seen in eight days. Three men with daypacks and trekking poles appeared, trucking steadily up the trail without looking in our direction. They were the first humans besides Daniel and Landon that I had seen in eight days. Somehow, they looked more real than how I felt, a ghost watching them from the shadows.

Daniel and Landon would be hiking out to the South Rim and I would hike to the North Rim. We said our goodbyes at this confluence and I stepped onto the trail.

My speed then increased threefold in comparison to the week’s slow pace. Our pace had been slow because we were hiking almost entirely off-trail, often scrambling and route-finding. This was the first of several transitions from ruggedness and inconvenience to ease and convenience that would happen over the rest of the day. Having traveled off-trail for a week, the maintained trail felt almost like laying down in a bed.

The second transition happened a few hours later as I neared the North Kaibab Trailhead on the North Rim and I disabled airplane mode on my phone. A handful of texts poured in. I was out of breath and exhausted so I took the opportunity to sit down, eat ten chocolate peanut butter cups, and let loved ones know that I was alright. A path of instantaneous communication appeared where before there was none. Like magic.

The next transition was from maintained trail to parking lot. Two jolly tourists with legs stiff from their car ride ambled casually from the pavement to the dirt trail in an attempt to see beyond the pines. My truck was waiting for me, another nearly magic machine of comfort and convenience. I turned the key and the engine purred as reliably as ever. I pulled out of the parking stall, stopped at a stop sign, and then turned right onto the highway north towards Utah, Kanab, I-15, Salt Lake City, and my life at home.

I found a beef medallion, bean, coleslaw, salad, and lava cake dinner in Kanab and then drove late into the night, breaking my trail routine of ramen and early bedtimes. The next day I woke late and began looking at my phone right away. Interactions grabbed me, pulled me in. I set the phone down to pick up my tea and recalled what I would have been doing if I was not at home: if I was still waking below 5,000 feet of schist, limestone, and sandstone beneath another perfectly blue sky.

So let’s back up about nine days.

Nine days ago, on the first morning of my Grand Canyon trip, I would have been waking at 6:00 AM, sitting up at 6:30 AM, then making instant coffee and oatmeal as cliffs thousands of feet above me were just starting to turn morning pink. Then I would have packed up my life to walk all day, find a new place to sleep, lay down at 7:00 PM, read and write until 9:00 PM, fall asleep, and repeat.

It’s a type of routine rooted in the fundamentals of life: eat, sleep, do chores, and move around. Whereas routines at home include tasks existing in some gray area disconnected from just living: checking email, silencing spam calls, hating the color of the couch you just bought. The purpose of some of these things sometimes feels unclear, and choices surrounding them often feel arbitrary. Life in the wilderness, with its simplicity of routine, on the other hand, reduces the amount of choice I have to contend with, and the choices that do exist seem always prescient and purposeful.