The Marvel Pass Trail is one route for backpacking Mount Assiniboine. Read this journal to learn about bears, gear, and more.

Good Things Come to Those Who Wait

This morning, I meet a photographer who waited a couple of more hours than I did last night to catch the meteor shower. The photos were stunning. Not only did he capture the meteor shower, but also the northern lights. Hikers interested in backpacking Mount Assiniboine get to enjoy some benefits if they stay up late.

I kick myself for being impatient. But I realize that I have some physical limitations too. My injuries from last year have healed well, but I have some permanent consequences that limit what I can do. Also, I am concerned about my hiking partner. Craig has been limping a lot; his knee injury from our first day is giving him fits. He borrows a tensor bandage from a first aid kit this morning.

This area (Lake Magog) is popular for a simple reason: it is otherworldly and beautiful everywhere – in the shadow of Mount Assiniboine.

The traffic of hikers and helicopters is usually off-putting for me, but here I find some security. Thankfully, the grizzly bears want to frequent the area less than I do. Having been entirely too close to two bears already, I have no desire to see any others outside the confines of my truck or a high powered zoom lens.

Here, there are several day hikes which can take you to indescribable delights.

I offer Craig an out, “we can just bum around Lake Magog for the day, or I can head out on my own if you want to put your knee up?”

I wanted to delve into the soul of this mountain. He needed some reprieve. We compromised and decided to climb the Nublet of Nub Peak. The Nublet is a short day hike to a vast plateau, underneath the higher vantage point of the Nub. On the way up there are three stunning crown lakes: Sunburst, Cerulean, and Elizabeth.

We start off in the afternoon to bypass the early morning backpacker traffic and have the trail almost entirely to ourselves for the rest of the day. Though I love the golden hours of sunrise and sunset, I love solitude more.

As anticipated, everything about climbing the Nublet is worthwhile. Every time I think the view can’t be more stunning, another turn up the switchbacks opens my eyes even more. 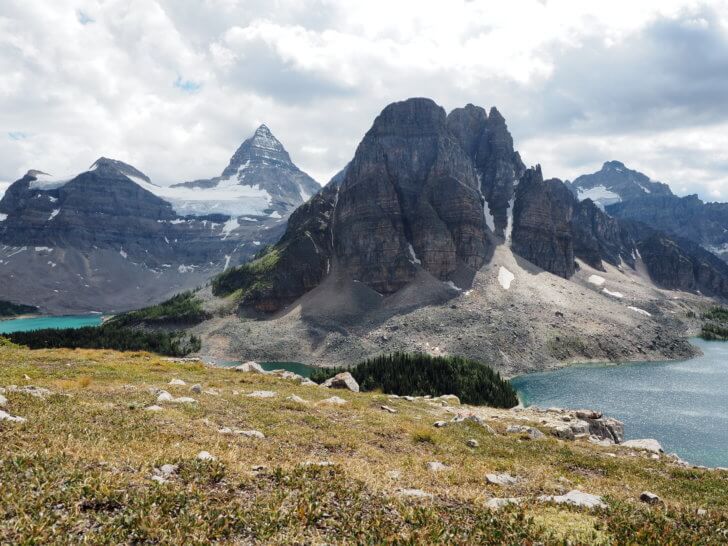 We return from the Nublet, and my sense of curiosity heightens.

From the Nublet, I see red-roofed structures, and I want to investigate them. Knowledge of a Warden’s cabin, small restaurant, and guest lodge are somewhat compelling. And I do feel responsible for reporting our two bear sightings to the Warden.

It’s now late afternoon, and we are not the only weary trekkers who think a cold beverage at the red-roofed restaurant sounds exciting.

As you might guess, the lodge is a hub for travelers in the Mount Assiniboine area. The owner is friendly and characteristically, a French Canadian. Also, the lodge carries a few supplies like maps and postcards. The owner gives us some old batteries out of a transponder for Craig’s headlamp.

The lodge is also a useful resource for trail information. To my chagrin, I learn that there had been a grizzly sighting at Wonder Pass earlier in the day…

Wonder Pass Was my route home.

We return to Lake Magog in good spirits and make dinner.

The kindness of fellow backpackers never ceases to amaze me. I borrow a lighter from one of the other groups using the cooking area after recounting the tale of my disappearing lighter and match-rationing strategy. One of the ladies gifts me her lighter. “I’m flying out by helicopter; I won’t need it again,” she says.

As you might guess, a hot meal and hot chocolate were nothing short of delectable, but my satisfaction remains limited as Craig realizes that our map is missing.

If I was traveling along the hiker highway through Sunshine Ski Resort, I could do without a map, but I was hiking a trail of unknown condition back through Aurora Pass. I knew I had the map at Assiniboine Lodge; so we set off on the 5 km (3 mi) round trip and retrace our steps.

The extra miles are the last thing Craig’s knee needs. He hasn’t complained and except for the occasional yelp has said nothing about it. His limping masks his heroism. We arrive at the lodge and discover that the owner found our map and has set it aside for us.

I have never appreciated Canadians more than I did on this trip.

We return to camp (again).

I collapse on my bed and set my alarm for 11:30 PM. I nap while I wait for darkness and another chance to photograph the meteors. Three hours later I groggily climb out of bed and trek down to a meadow nearby. I shiver against the cold to stay warm; the temperatures are just above the freezing point.

I wait in the cold as long as I could, but I am risking hypothermia.

And my camera battery icon displays the low power warning only minutes after I take the batteries out of my warm pocket and immediately insert them into my camera. Clearly, I am too early; the meteor shower will not start in earnest for several hours, and I know I have long miles to make the next day. I give up and return to my tent disappointed, again.

Apparently, some things are not to be.

Emylene and Craig begin their exit from their Mount Assiniboine Backpacking Trek. What’s in store? Read about their final day, trip reflections, and gear list / notes in Part 5.