The Venta Mitten utilizes Gore-Tex Infinium face fabric paired with a soft fleece-lined interior and Octa Loft insulation. A slim fit, touch-screen sensitive thumb-pads, TPU reinforcement above the palm and at the fingertips, and carabiner loops for on-the-go storage round out the package. These mittens, though pricey, have quickly become my primary backpacking, trail running, and cross-country skiing hand insulators. 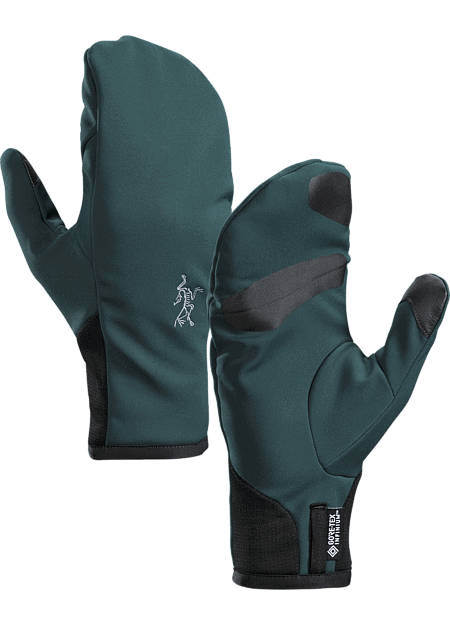 The Arc’teryx Venta Mitten is a Gore-Tex Infinium-shelled, insulated mitten for high-output activity in cold temperatures that weighs 2.0 oz (57 g) per pair. – $59.00 at Arc’teryx. 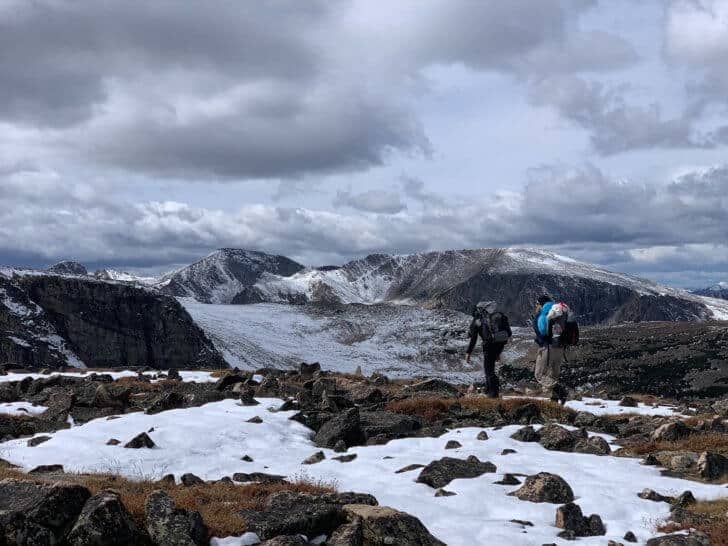 The author (right) crossing an exposed plateau in the Beartooth-Absaroka Wilderness while wearing the Arc’teryx Venta Mitten. The mittens ended up being invaluable on this trip – which included high winds and chilly temperatures. Photo: Ryan Jordan.

Why I Bought the Arc’teryx Venta Mitten

In September of 2019, I participated in Backpacking Light’s Wilderness Adventures trekking program as a guide. As we prepared to leave Red Lodge, Montana, for the rugged Beartooth Wilderness, a storm suddenly appeared on our weather apps – a storm that would eventually dump four feet of snow all across Montana.

It was at this point that I received what is possibly the best text message ever sent to an outdoor enthusiast. The text was from my wife, and here is what it said:

“If you need any new gear with this storm coming in, go buy yourself something. I want you to be warm.” 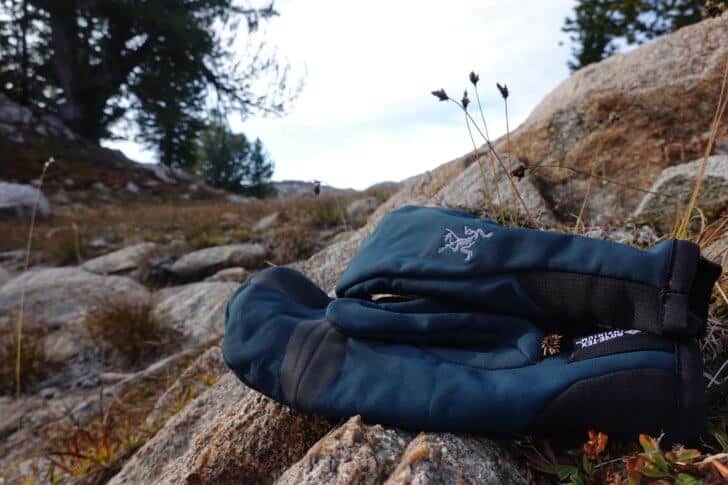 The Arc’teryx Venta Mitten is ideal for windy, cold, exposed, shoulder-season hiking in Montana and Georgia.

And that’s how I ended up with the Arc’teryx Venta Mitten. At $59, they represent the most money I’ve ever spent on hand insulation, and had I not been given gear-related carte blanche from my wife, I likely would have passed them up. I’m glad I didn’t. The Venta Mitten ended up being my most cherished piece of gear on that trip – a six-day hike that included high-exertion movement on exposed, windy plateaus. Since then, I’ve used them on a three-day trip in North Georgia’s Cohutta Wilderness, and innumerable trail runs and late-season mountain bike rides in the eastern Sierra Nevada. 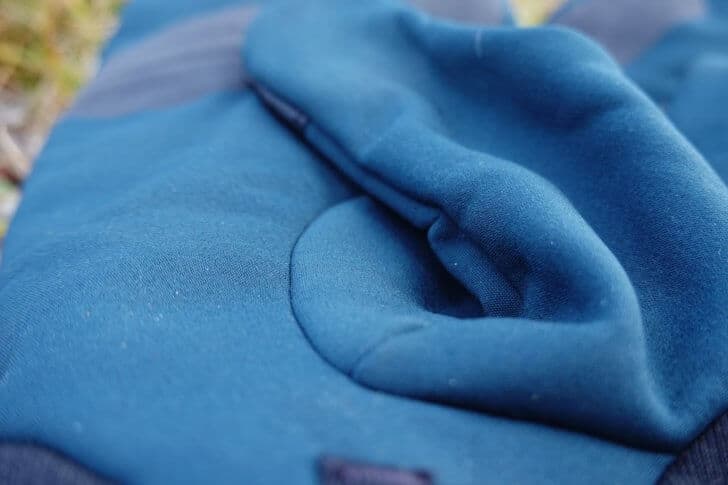 The Gore-Tex Infinium fabric used in the Arc’teryx Venta Mitten is windproof and breathable, but not waterproof. The Octa Loft insulation is just enough to keep your hands warm while your body is moving.

The Arc’teryx Venta Mitten is lightly insulated but exceedingly windproof and highly breathable. It is constructed of Gore-Tex Infinium face fabric and a small amount of Octa Loft insulation (a highly-breathable synthetic active insulation material). The upshot is a mitten that shields your hands from icy gusts but still breathes well in heavy exertion.

I’m forever taking gloves on and off during shoulder-season hikes – sometimes as much as three or four times an hour. The Venta Mitten is the only hand insulation I’ve ever been able to leave on in these conditions without stewing my hands in sweat. Since my initial six-day testing period, the Venta Mitten has become my go-to cold-weather trail running glove. They are also great for cross-country skiing, snow-shoeing, or any other high-output, cold-weather activity.

It is important to note that these mittens are only lightly insulated. I don’t believe they’d work for a backpacker whose style included lots of rest breaks, or for people whose hands get inordinately cold. The Venta Mitten is designed to keep you warm while in motion, and that is what they do. A fleece interior lining is soft against the skin, and the insulation provides a little warmth while you are just sitting around – but you’ll need another layer if you plan on long mornings in camp at 32 F (0 C) and below. You can pair them with a liner glove layer (see below), but you should take that into account when sizing.

The Arc’teryx Venta Mitten is not waterproof, nor is it designed to be. Anything other than a light mist will blow right through them. The fabric absorbs water rather than beading it, quickly wetting out in all but the mistiest rain. In wet weather, I pair the Venta Mitten with a waterproof shell (my current pair are Raidlight MP+ Waterproof Overmitts), and they still breathe just fine. 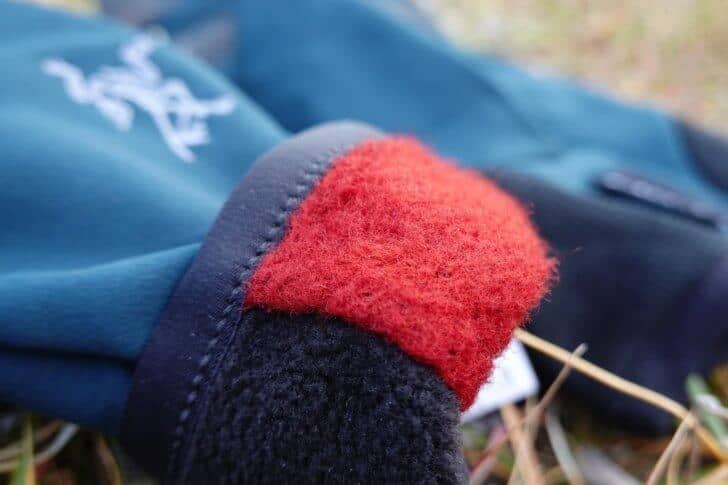 The Octa Loft insulation (red) used in the Arc’teryx Venta Mitten provides a smidgen of extra warmth, while the high loft fleece (black) is soft against the skin.

These are low-profile, slim-cut mittens. The Gore-Tex Infinium fabric has just a slight stretch – but not much. The sizes are unisex, and the wrist is cut intentionally small to fit well under jackets. Stretchy panels at the wrist give you a little leeway while taking the mittens on and off, but again, not much.

All this is great for weight and dexterity purposes – the Arc’teryx Venta Mitten is fairly dextrous as far as mittens go, and only weigh a combined 2.0 oz (57 g) – but can be a little frustrating from a sizing standpoint. In my research, some users have found the Arc’teryx sizing guide accurate, and some have not.

I usually wear a size medium glove and ended up being happy with size medium Venta Mitten. When the temperature drops below 20 F (-7 C), I will pair them with a pair of thin merino wool gloves (current pair – REI Co-op Merino Wool Liner Gloves) and still have room to wiggle my fingers. But if you have doubts, or you know your hands straddle the line between sizes, I’d size up (or better yet, make your way to a store and try them on).

This a well-designed product. The stretch panels are just enough to get the mittens on and off, and the use of fabric is minimalist, even sparse. Everything comes within a fraction of being too small or too tight – but stays just on the correct side of the line (with one exception – see Other Features, below). One caveat to this – if you wear a watch, you might want to push it down slightly on your wrist. The Arc’teryx Venta Mitten will not fit very well over it.

The Venta Mitten is slim-cut and tight-fitting, especially around the wrist. Stretch panels help out a little.

I also find the mitten’s cut, materials, and shape to be aesthetically pleasing – even the color (mine are a kind of douglas-fir green I haven’t often found in outdoor products). 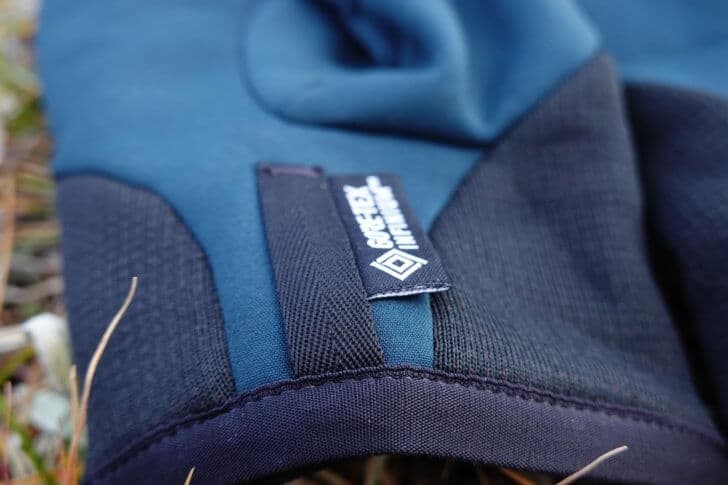 The Arc’teryx Venta Mitten is slim-cut and tight-fitting, especially around the wrist. Stretch panels help out a little.

The Arc’teryx Venta Mitten is the first Arc’teryx product I’ve ever owned (other than a thin beanie I got on clearance). Many of their products, particularly their jackets, are simply out of my financial reach. Even these mittens, at $59, were a bit of a leap for me. So I’ve been pleased to find their construction is as rock-solid as Arc’teryx’s reputation led me to believe they’d be.

While researching for this article, I did come across stories of stitching popping loose on the Venta Glove version of this product. An interview conducted on BPL’s forums turned up the same info. I’m happy to report that I’ve experienced no such issues with the mittens. 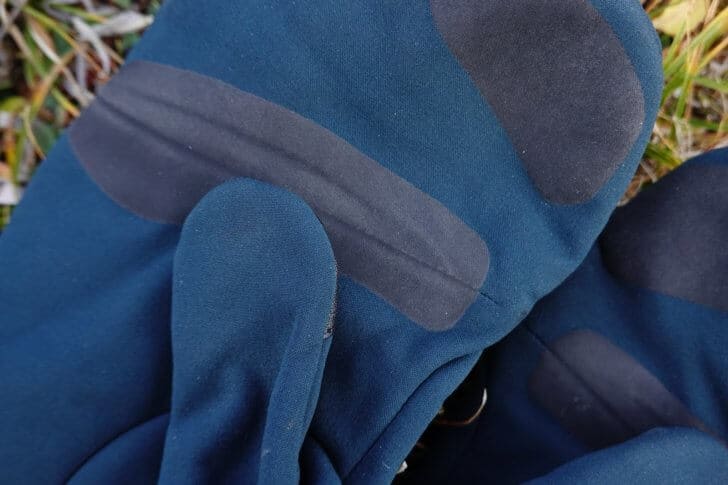 The face fabric used in the Arc’teryx Venta Mitten has held up well to the abrasions of bushwhacking and talus scrambling.

After some hard use, I haven’t found any loose seams or stitching. TPU coated panels protect a seam just above the palm and the tips of the index and middle fingers. I haven’t noticed any abrasion, scratches, or tears on the face fabric itself – even after nine days of talus scrambling and bushwhacking in Montana and Georgia. I haven’t found any data on Gore-Tex Infinium’s purported durability, but so far, so good. 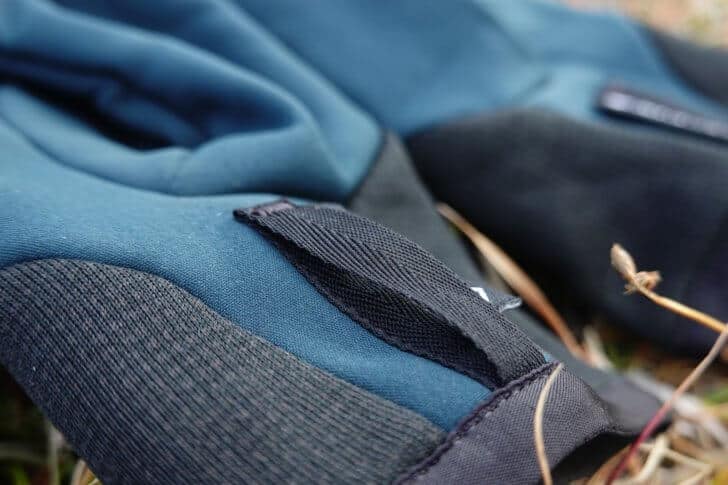 Carabiner loops on the Arc’teryx Venta Mitten are useful but could be slightly larger for easier use while on-the-go.

Small carabiner loops adorn each mitten, running from the wrist hem to just below the thumb. These loops are the one area I wish Arc’teryx had used a fraction more material – even a centimeter more fabric in each loop would make for a better time clipping to a carabiner. For some folks, this will be a minor issue. For me, it’s a little irritating. My hiking style centers around organizable external storage, and I frequently clip and unclip items from my pack while on the move. The loop on the Arc’teryx Venta Mitten is just a little too small to make it easy.

There is a touch-screen sensitive pad on the thumb of each mitten. This pad is functional and doesn’t create any cold spots over the thumb. An interesting note: even though the TPU coated fingerpad isn’t listed as touch-screen compatible, it seems to work on my smartphone screen anyway. It’s nice to have more than just the thumb to use when trying to operate a phone for photography or navigation.

How About the Arc’teryx Venta Glove? 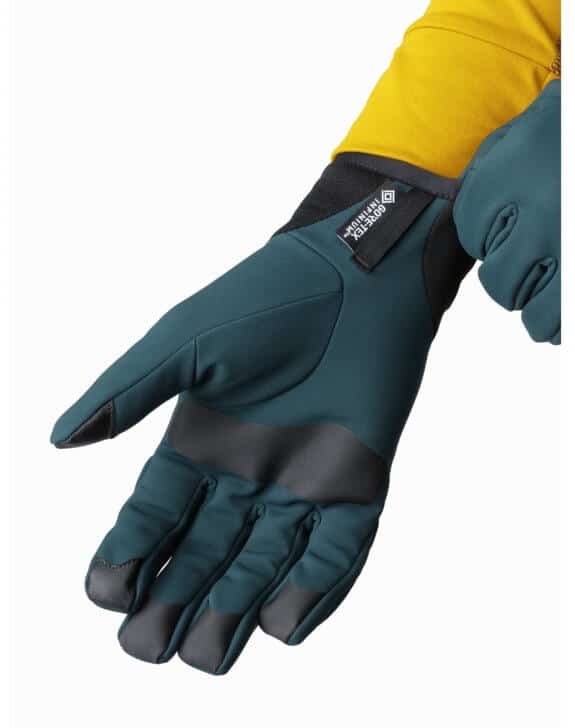 While Andrew was basking in the glow of his new Arc’teryx Venta Mitten pair during one particularly nasty day on the Beartooth Plateau, I was stuffing my Venta glove-shrouded hands into my pockets to protect them from the arctic-class wind.

In spite of my mitten-envy up on the plateau, I generally found the Arc’teryx Venta Glove to be one of the better cold-weather (3-season) mountain gloves I’ve ever used. Here’s why:

I’ve now used the Arc’teryx Venta Glove for nearly 40 days in the mountains during the Fall and Winter of 2019, and my favorite feature so far is that they are holding up extremely well to the abuse of collecting firewood, bushwhacking, rock scrambling, and mountain snow travel – with no holes or popped stitches.

Also check out the Arc’teryx Venta AR Glove, which offers a touch more insulation and more durability with a full-leather palm.

For this section, I wanted to compare the Arc’teryx Venta Mitten to other windproof-but-not-waterproof mittens with a similar level of insulation. This comparison proved to be somewhat difficult, as most of the windproof mitten market seems to consist of more highly-insulated mitten-to-glove convertible options. I’ve also added the Arc’teryx Venta Glove to this table. See Ryan Jordan’s section in the “Commentary” for more information on these gloves.

Scroll right on small screens to view the entire table:

Of the compared mittens and mitten/glove convertible options, the Arc’teryx Venta Mittens are the most streamlined, second-to-least heavy*, and likely, the least warm. I do not have direct experience to compare the breathability of each option.

*SealSkinz customer service told me in an email that the Windproof Cold Weather Convertible Mitts weigh 0.7 oz (20 g) each. This seems hard to believe, but I don’t own the product to verify this weight. For now, we will have to believe them! 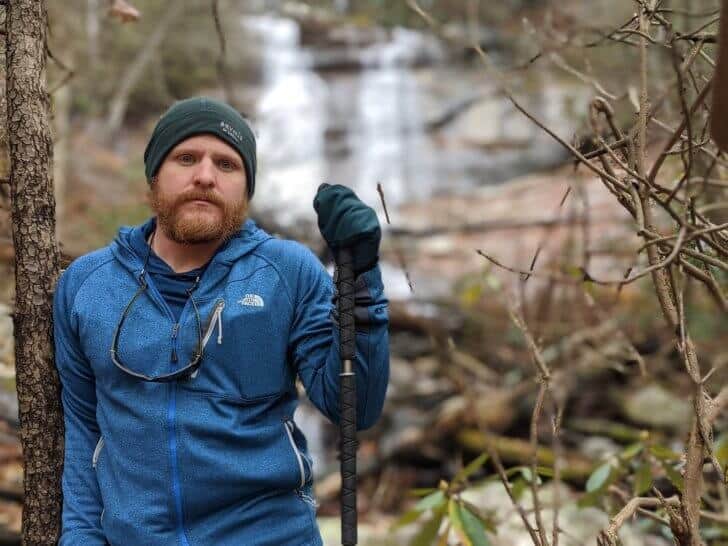 The author wearing the Arc’teryx Venta Mitten at Panther Creek Falls in the Cohutta Wilderness. The hike up to the falls was steep and strenuous, and the temperature was in the 30 F to 40 F (-1 C to 4 C) range. Perfect conditions for the Venta Mitten. Photo: Nick Ramey.

I rarely, if ever, make gear purchases without planning, budgeting, and research. The Arc’teryx Venta Mitten is certainly the most expensive piece of gear I’ve ever bought on a spur-of-the-moment-oh-crap-there’s-a-storm-coming basis.

So I’m happy to say I haven’t regretted the purchase one bit. Certainly, these mittens have limitations – they are not a universal solution to every insulation or weather problem. But as a durable, windproof component of a well-considered layering system, they’ve proven invaluable to me, and have earned a more-or-less permanent spot in my fall-winter-spring kit.

Andrew Marshall is the Gear Editor and Producer for Backpacking Light Podcast. He lives in a tiny cabin high in the Eastern Sierras. AT SOBO 2012, CT SOBO 2015, Scotland Coast to Coast 2017.