This review compares the boil time and fuel consumption performance of the Trail Designs 12-10 and Kojin alcohol stoves, and the Zelph Starlyte and Starlyte Mod alcohol stoves, under a variety of wind conditions.

The Trail Designs “12-10” and Kojin, and the Zelph Starlyte and Starlyte “Mod” are four lightweight alcohol stoves of interest to our community. They are simple, lightweight, durable, low-cost, and functional designs.

With each of them weighing around 16 g (0.5 oz), the factors to consider in evaluating their performance include fuel consumption and boil time in a variety of environmental conditions. This review investigates and compares the performance of each stove.

The following table presents a comparison of each stove model (scroll right to see all data if needed).

* Manufacturer’s claimed weight includes a pot support, which isn’t needed for Caldera Cone use. Actual measured weight is reported for the stove without this pot support.

Three of the models contain fibrous material in the fuel chamber (“batting”). Some alcohol stove enthusiasts and manufacturers will also call this batting a “wick.” The purpose of this batting is: 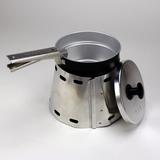 For comparison purposes, a Trail Designs Caldera Cone (Sidewinder Model) was used for all stove tests in this review. The Caldera Cone is designed to work as an integrated system with an alcohol stove and cooking pot. Caldera Cones are custom built to work with a particular model of cooking pot. For this review, a K-Mart (Stanco) Grease Pot was used in all tests.

I began intentionally practicing ultralight backpacking only in the last two years; my body is less inclined to haul big loads over long miles or steep climbs. Over the past several months, I’ve been researching lighter cook kit options to replace my one-pound cook kit with something lighter and a bit more compact.

Last fall, I started researching and learning about alcohol stoves. I collected a bunch of cat food cans and made some with our Boy Scout troop. It was fun, easy, inexpensive and didn’t take a lot of time to make. However, I felt like after years of enthusiasts using and making stoves for ultralight cooking systems, someone would have thought of a better, more efficient design than something hacked out of a cat food can!

My goal was simple: which alcohol stove offered the best balance between boil time and fuel efficiency for boiling two cups of water? For my Scouts, I was also interested in burn and fire safety: a stove that would minimize the hazards of spills while cooking and filling.

I performed some experiments to evaluate the performance of the alcohol stoves for this review. Each experiment used the same cook kit.

The Cook Kit: Each stove was used in a Caldera Sidewinder Solo cone combined with a K-Mart (Stanco) Grease Pot (5.6 in diameter x 4.0 in height, 32 oz capacity).

First of all, let me say that all of the stoves performed to my expectations for how an alcohol stove should perform (for my needs). This series of experiments essentially pits four well-performing stoves against each other to see if any one of them is clearly superior to the others.

Depending on the distance of a hike or how arduous a hike is planned to be, you may want to focus on pinching grams (whether as part of your cook kit or fuel requirements) where you can. That end objective is one of the goals of collecting stove performance data like this.

With that in mind, here is the raw data from my experiments (scroll right to view all data if needed):


*The Starlyte struggled in high winds. At 16:38 or so the flame burned out, and the temperature of the water had only reached 184 deg F.

I have been active in the outdoors since my early teens. I’ve been most active in the Uinta’s, Southern Utah, and East Idaho. My passions are rock climbing, cycling, hiking, and kayaking. Even though I’m already spread out I would love to get into pack rafting and do more cross-country skiing and snowshoeing. My current goals are to do more peak bagging along the Idaho and Montana border while incorporating Ham Radio use into the outdoors.