Will heavier mid and outer soles plus durable leather uppers make for backpacking bliss, or will the Treks leave our feet wrecks? 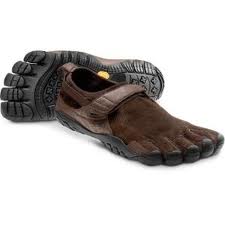 While it makes a lot of sense to me, it is also quite a touchy subject with adherents in both camps. I wanted to know how their KSO Treks would work for backpackers, and as an added bonus, my kids thought the "gorilla feet" looked cool.