So when Ben texted me that he and two other guys had lined up a brand new "epic" trip in Monkman Provincial Park, British Columbia, I probably should have thought about what I was getting into. But I was up for some excitement so I joined the trip. 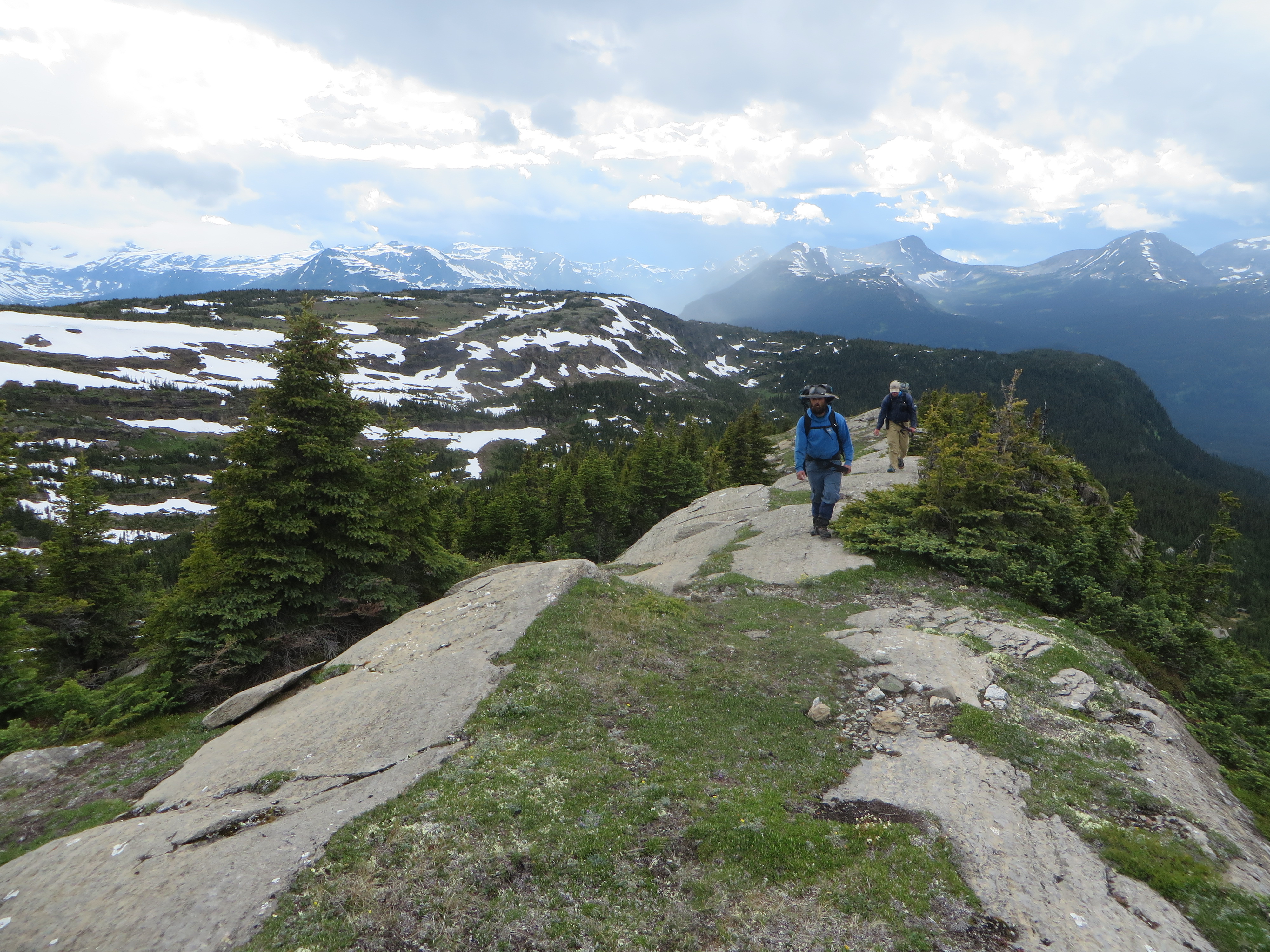 My friend Ben Brochu and I have had some “interesting” trips together. Most notably our “5-day” Wood River Expedition turned into an 11-day survival trek. After that experience, we went home and spent the winter scheming on Facebook for the 2016 summer. Usually Ben, the optimist, would suggest a route. As the realist (or pessimist if you ask Ben) I would look at Google Earth and raise concerns about miles of Devil’s Club or killer rapids. So when Ben texted me that he and two other guys had lined up a brand new “epic” trip in Monkman Provincial Park, British Columbia, I probably should have thought about what I was getting into. But I was up for some excitement so I joined the trip.

Day 1 was more of an evening hike. Ben and I carpooled and met Ben Scholten and Tim Siemens in the town of Tumbler Ridge. We threw our gear into Ben Scholten’s truck and began the drive to the trailhead.

Day 2: The Hike to Hugh Lake

The plan for Day 2 was to get up to Monkman Lake and leave our rafts there. After that, we hoped to get as close to the base of Paxton Peak as possible before we camped.

Our goal for Day 3 was to summit Paxton Peak. We weren’t sure if there was an ideal route to the summit or how we’d deal with the unmelted snow. Adding to the complication was the fact that clouds were covering Paxton Peak so we couldn’t visually plan a route. We planned to just wing it using Ben Scholten’s route finding skills and Ben Brochu’s GPS topo maps. Tim woke up feeling bad, so he decided to backtrack down to Monkman Lake and wait for us there. About halfway up Paxton Peak, I wondered if I should have gone with him. The climb would end up being the most difficult part of the trip.

The plan for Day 4 and 5 was to packraft down Monkman Creek to a spot close to where we’d left Ben Scholten’s truck. Ben B. thought it looked fairly beginner friendly with the exception of some waterfalls. Tim and Ben S. had experience in canoes but neither had used a packraft so we were hoping there wasn’t a ton of whitewater on the way out. I was hoping there would be at least some water to try my new Kokopelli raft out in. 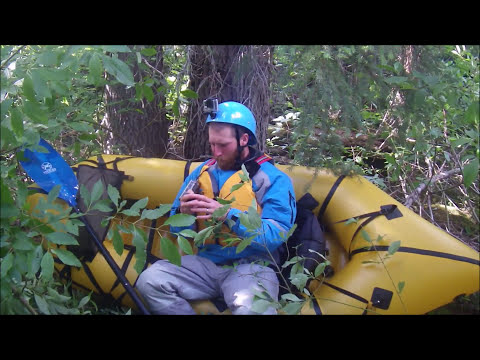 Ben S. and Tim used old MEC Packs. Ben B. used a Seek Outside Unaweep 6300. My pack was a MYOG design that used the Unaweep frame and hipbelt. I liked it okay, but I liked the look of Ben’s Unaweep even better. The Unaweep was a few inches wider at the bottom. All other things being equal that allowed Ben to have more of his weight and bulk a bit lower down. After this trip, I ordered a Unaweep 6300 pack bag to go on my frame.

We all used a variety of dry bags. Since I was putting my stuff in the packraft’s tubes I didn’t need to worry as much about totally waterproofing my stuff. I used two large dry bags to organize my stuff into roughly equal loads so it would be balanced on either side of the raft.

I tried out an Enlightened Equipment quilt with water-resistant down for the first time. It seemed to work a lot better than my old quilt. The sizing was a bit more generous so I was able to go without a bivy.

I also tried out my Six Moons Designs Deschutes Tarp for the first time on this trip. On that rainy night at Hugh Lake I would have preferred a bit more space but other than that I was happy with it.

Ben S. used a hammock and a really long tarp he’d picked up at a garage sale. The extra length made it a nice place for us to eat dinner when it rained. Ben B. used a hammock and an Arrowhead Silnylon Tarp. If I recall he told me the hammock and tarp combo weighed about 20 oz. (not counting the underquilt), so it was heavier than my 7oz tarp plus 8oz pad but he said it was very comfortable. Tim used an old Gore-Tex bivy and no sleeping pad. He figured his -20 sleeping bag put enough insulation between him and the ground.

I decided I really, really did not like my Altra Lone Peak 2.5s on this trip. I liked them even less when the began to fall apart on another short trip in Wyoming. The issue was that the sole didn’t grip rocks well and the shoes had such a sloppy fit my feet would twist around in them at bad times. I had much better luck later on with the Lone Peak 3.0s, but they were not available on this trip. On my next trip with Ben B., I used a pair of Asolo Plasmic hiking shoes with a sticky Vibram sole and a more secure fit. The difference was huge. I felt way more confident on slippery scree slopes and rocks.

Normally I wear a thin button up long sleeve shirt for buggy places like the northern Rockies. On this trip, I experimented with a Patagonia Midweight baselayer and was pretty happy with it. Bugs could bite through it so a few times I wore a wind shirt. That was hot however so I often just sprayed my shoulders with a bit of 100% DEET and that solved the problem.

I also used a fleece instead of a puffy jacket with a synthetic puffy vest in case I needed additional warmth. I don’t recall ever needing the vest on this trip. With the sun up till around 10 PM, I was usually in my sleeping bag before it cooled down. On the other hand, the fleece was nice and warm to put on over my damp clothes after a day of paddling.

Ben S. and I used decked Kokepelli Nirvana rafts. They are bit heavier than other rafts but the whitewater performance is excellent. I’m also a fan of the double chamber design. Ben B. used a prototype self-bailing Nirvana. Tim used a Feathercraft BayLee. Everyone except Tim was using a raft with a cargo zipper. This improved performance in whitewater and it also made portaging easier. We could just throw the rafts over our shoulders and go. With no cargo zipper, it is typically necessary to take your pack off the front for a long portage. The downside is putting all that weight inside a raft makes it easier to puncture it if you drop your raft something sharp.

With the exception of the one rapid where I swam the rafts didn’t get a real whitewater work out. It would have been possible to do this trip with lighter, less capable rafts. But I prefer “too much” raft to “not enough” raft in situations like that. As far as we knew Monkman Creek had not been run so there was plenty of uncertainty even with detailed maps and Google Earth images.

My little swim was more embarrassing than dangerous because there was a nice lake below the rapid where I could catch all my stuff and get organized again. As a general rule though Ben and I both recommend caution in such situations. It only takes one mistake to turn a fun rapid into a dangerous situation.