You are here: Home / Places / Expedition & Trip Reports / Bear Attack in the Rockies

The downside about getting bit by a bear is that it leaves the wrong impression. Must’ve been a crazy bear. She must’ve had food in her tent. Neither statement is true. Plus, if you’re in your tent when the attack occurs, as I was, you lose gear. My tent and my favorite sleeping bag ever (irreplaceable-Marmot no longer makes it) were destroyed, along with the powder-blue Patagonia jacket I was wearing. There’s no upside to a close encounter with a bear, unless of course, you count survival. Which I do. 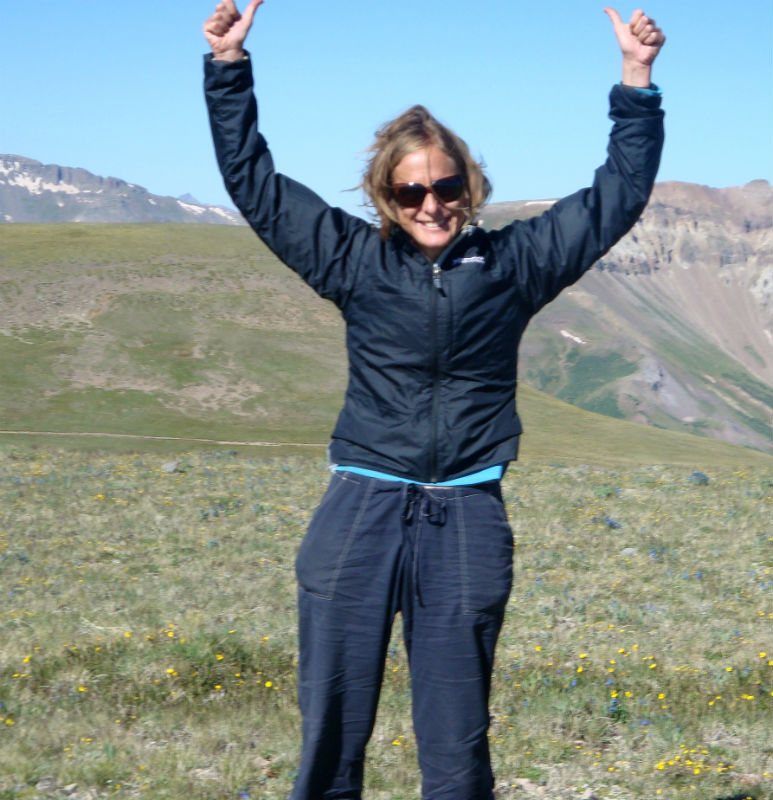 Highest Point on the Colorado Trail, 13,271 feet, below Coney Summit.

As thru-hikers and backpackers, we think about bears. At one time or another we study them, or at least learn their habits. Years ago when I lived in Yosemite, I got an up-front education on how to live peacefully and respectfully among them. I remember being terrified the first night I camped in Little Yosemite Valley, an area of the park known for heavy bear traffic. I was fresh from the city, it was my first night in the backcountry, and we were camping under the stars. I remember wondering if a bear would step on us, and prayed that we’d hung our food properly. I didn’t see a bear that night, but over the course of the next six years I saw many, and I grew to love their large beauty and spirit.

During the five summers prior to my bear attack, I solo thru-hiked long trails. Quick list: The John Muir Trail (x2), The Colorado Trail, The Pacific Crest Trail, Vermont’s Long Trail twice – once hiking north, and once hiking south. In over 4,000 miles I saw only seven bears; six on the PCT and one on the Long Trail. And yet, they were often on my mind. I sang at the top of my lungs in the evening and early morning hours to alert them of my presence. I ate dinner miles before making camp. I made sure to look for mama bear when I twice saw cubs. You know the drill.

In the spring of 2014, I left my New England home to volunteer for a month at a meditation retreat center nestled in the mountains of southwest Colorado. Among other things, I wanted to know what it would be like to camp night after night in one locale, without the thru-hiker need to pack up and walk 20 miles the next day. I wanted to know what it would like to be a stationary camper. What might it be like to deeply observe the mountains, the dry brittle earth, the deep blue sky, the wildlife, without the pressure of thru-hiking? I arrived at the retreat center and was shown where to camp. 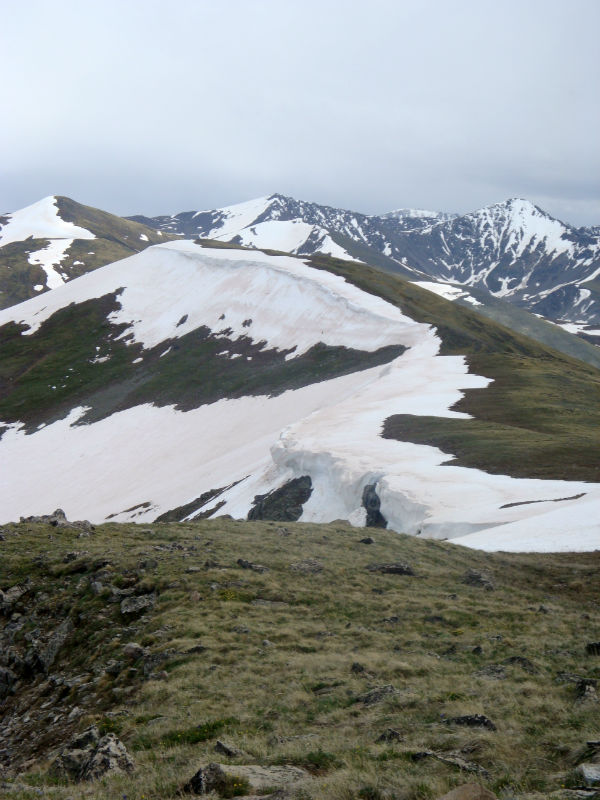 The Tenmile Range near Breckenridge.

Eleven days later, at 5:45 a.m., I hear something moving outside my tent and think it’s probably a raccoon, so I yell, “Shoo!” I’m lying on my stomach. A few moments later, my tent poles snap and part of my tent collapses. Then a heavy, lumpy thing sits on me. It presses my pelvis into the earth. A bear is sitting on me! Several moments pass, then the bear gets up and starts walking away. Wow, am I lucky! I assume he’s leaving, but he’s not. He walks to the front of my tent, where my head is, and starts tearing the vestibule. It’s a silent morning – no wind, no rain – and each tear sounds phenomenally loud, and so very close. The sound reverberates throughout every cell in my body. I can’t wrap my mind around what’s happening. A black bear is doing this? There’s no food in my tent, no reason for such behavior. I don’t understand. I can’t understand. Then I black out.

I wake to an intense pain in my left arm and turn to see the bear’s big head very close to mine. I’m lying on my back now, and he’s lifted my left arm up high, dangling it above my head (still attached to my body). My shoulder is off the ground. His teeth are jammed into the thin cotton jacket that I sleep in, and jammed into my arm. Thank goodness for the thin protection of that jacket. Blood is everywhere. Red blood against pale blue jacket. Red blood dripping onto pale blue sleeping bag. His head with my arm hanging from it is astonishingly close to my face. What to do? My mind remains calm and very clear. Fight! Scream! Fight for your life! Give it all you’ve got! His wet, black nose looks soft and vulnerable and the moment I decide to make it my target, my body takes over completely. I watch as my right arm swings and I punch him in the nose. Over and over I punch him on his black, moist nose. Every morsel of energy, every ounce of desire to live-my entire life force-accumulates in my right fist as I punch and punch the black bear that won’t let go of my arm. 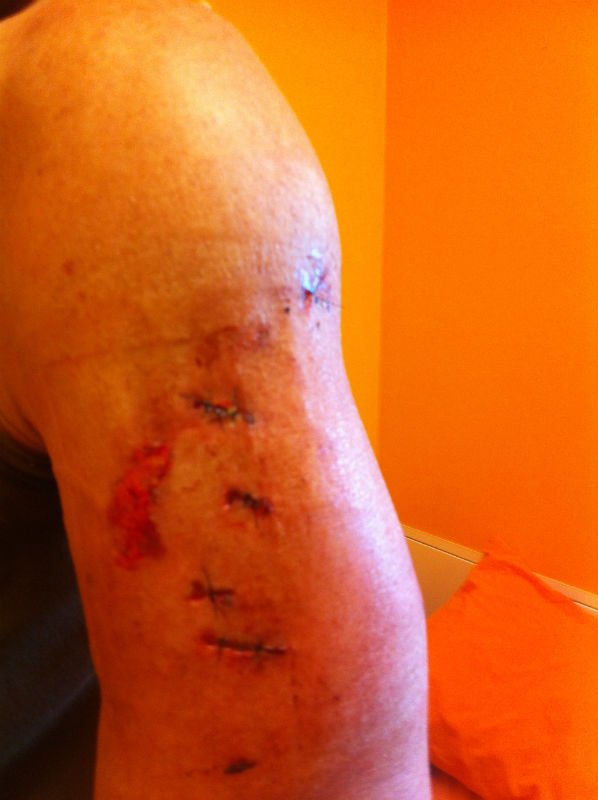 My arm the day after the attack.

While I’m doing this, I scream at the top of my lungs: “Hey bear! Hey bear!” I scream and punch, and can’t understand why he won’t let go of me. I try looking into his eye, his right eye, the only eye I can see-I want to look into his eye-I want to get a sense of this beast. I want to understand him. But he’s shaking me back and forth and his eye is high and looks off at an angle. I can’t get a sense of him. When he refuses to let go, I calmly think, “Ok, next he’s going to claw me down the center of my body. One big swipe. I bet that’s all it will take.” I fight like hell with a calm knowing that next he will rip me apart. His teeth are white and clean and I think, “That’s a good thing. Fewer germs.”

For some reason the bear drops my arm. I survive the attack. He bit me twice, leaving twenty-one punctures. He was a three-year old adolescent male, who when captured had a belly full of wild turkeys. I can’t help but wonder, did he eat the turkeys before, or after our visit? He could’ve killed me, but he didn’t.

At the hospital the nurse tells me that she was on duty nine months ago, when they brought in the honey-faced girl who was bit by a bear. She was camping at the same retreat center and had gone to her tent for the night with honey smeared onto her face as a beauty treatment. A bear tore into her tent and bit her arm. She screamed and he immediately left. Her former campsite was not far from mine. The nurse tells me that my arm is “much, much worse.” The other woman received two, maybe three punctures. Her bear was not tracked and caught.

In 2010, when I completed my thru-hike on the Pacific Crest Trail, I reached Monument 78 at the Canadian border, and the phrase “everything and nothing has changed” coursed through my brain. Meaning, I think, that I’d just completed a dream. I’d walked for months in the wilderness, on a trail I adored, and with each step that I took I felt completely at home. My sense of the world, my sense of this planet we live on, my sense of myself (in some ways) changed, merely by going for a walk. When I returned to the world off-trail, not much was different. Everything and nothing had changed.

Since the bear attack the phrase that stays in my mind is: everything and everything has changed. I’m still sorting that one out.

Anne O’Regan is the author of Tamed. A City Girl Walks From Mexico To Canada On The Pacific Crest Trail (available on her website:anneoregan.com). She is currently working on her next book, entitled The Bear That Followed Me Home.