You are here: Home / Articles / “Leave Only Footprints: My Acadia to Zion Journey Through Every National Park” by Conor Knighton (Book Review)

“Leave Only Footprints: My Acadia to Zion Journey Through Every National Park” by Conor Knighton (Book Review)

Mark Wetherington reviews a book about national parks and uses it to examine his own relationship with iconic public lands. 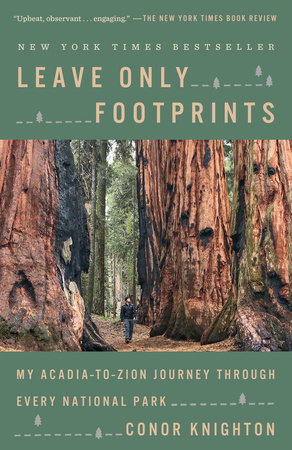 I have a somewhat irrational uninterest in accomplishments that are only noteworthy because they are bound by an arbitrary time frame or have an asterisk denoting some other allegedly interesting and novel characteristic. Fastest Known Times, Triple Crown trails hiked consecutively in a single non-leap year in alphabetical order, recognition of the first person to juggle golf balls at every AT shelter while reciting Walt Whitman’s Leaves of Grass – there’s just not much about these real or imagined accomplishments that generates much interest from me. Thus, the premise of “Leave Only Footprints: My Acadia to Zion Journey Through Every National Park” by Conor Knighton – where the author visits every national park in a single calendar year – did not exactly speak to my soul when it was recommended to me by a bookseller friend. Nevertheless, with an interest in both national parks (I’d recently returned from a trip to Capitol Reef National Park) and new nonfiction books (I’m a librarian), I decided to give it an open-minded read.

Rather than being structured chronologically in the order in which the author visited the parks or, even more boringly, in alphabetical order, the book is separated into relatively short and delightfully readable chapters focused on distinct themes. Some of these themes are natural (Water, Trees, Ice, Mountains, etc.) and others have a more emotional or metaphysical focus (Love, Forgiveness, God, Home, Disconnecting, etc.). Several parks are included in each theme, which allows for surprising and seemingly incongruent parks to be grouped together. Parks that might have been established decades apart and thousands of miles away are grouped together, for example, Mesa Verde and Great Smoky Mountains National Parks are grouped together under “Home” and Cuyahoga Valley National Park shares the “Food” theme with two national parks in Alaska. Other groupings, like those based on geology, are more predictable (Mammoth Cave, Wind Cave, and Carlsbad Caverns are all discussed in the chapter on caves).

Although opening with a theme of Sunrise (Acadia) and closing with a theme of Sunset (Grand Teton, Yellowstone), the core of the book moves from one themed chapter to the next and rarely with any direct link to the chapter before or after it. For less deft authors, this perhaps could’ve resulted in the book feeling more like a collection of disparate essays about national parks. But the author’s skill, as well as the focus on national parks in the framework of visiting them all in one year, prevents this from being a point of detraction. Similar in a certain way to the beauty of collections of Zen koans, the author’s mindful approach to experience the national parks – even briefly, as he is rarely in the same park more than a day or two due to the demanding schedule required to visit the 59 national parks that existed at the start of the author’s quest – makes this book greater than the sum of its parts. While there are many amazing national monuments, recreation areas, seashores, and historical sites managed by the National Park Service, the author limits his journey to those that have the designation of National Park. New River Gorge, White Sands, and several other National Park Service-managed units became national parks after his quest was over and are mentioned in the epilogue.

Given the parameters of the project and the limits that were imposed on Knighton’s ability to spend lengthy amounts of time in one place, there is necessary brevity present in the reflections on each park. Some parks barely get more than a few paragraphs and none receive more than a dozen pages. Thus, this is not a book to pick up if you’re seeking some sort of comprehensive overview of the national parks. But I found that the brevity allowed for the insights, and often the humor, of the author to be more quickly and clearly expressed. His talent at getting to the most interesting part of a story (and in this case, more than 59 individual stories) seems to be a skill honed from his background in television (he has been a correspondent for CBS Sunday Morning as well as a host of, or commentator on, various TV shows).

By focusing on the themes of the national parks as he experienced or observed them, Knighton allows for the deeper and perhaps sometimes under-appreciated essences of these landscapes to shine through. Rather than reducing them to their acreage, superlative features, or historical importance the more intangible and profound aspects of the parks are often explored. The author explores the parks and the aforementioned aspects by foot, scuba tank, and boat, among other means of travel. His sense of humor is present on nearly every page and keeps his account of his journey from getting too dull or hum-drum as he travels from place to place. “The key to making a Hampton Inn breakfast taste amazing is to have a near-death experience the night before,” is one such line that shows off his ability to not take things too seriously.

Home › Forums › “Leave Only Footprints: My Acadia to Zion Journey Through Every National Park” by Conor Knighton (Book Review)