This article presents some case studies of using Google Earth for wilderness trip planning, with a presentation of my process and lessons learned. 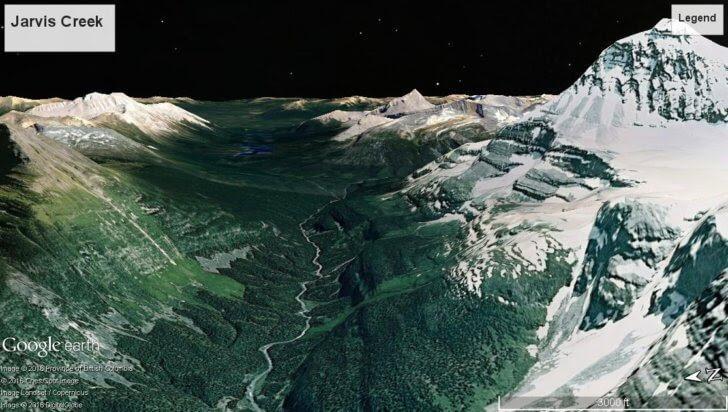 Ben and I used Google Earth to plan a trip on the Wood River and the results were “interesting.” Our five-day trip turned into an eleven-day slog as we fought through horrendous brush, canyons, devils club, waterfalls and unsafe rapids. After that, I put a lot of time into looking at what went wrong and how I could use Google Earth more effectively for future trip planning.

Fortunately, I learned a few tricks that made my next summer of exploring much more fun. This article will cover:

I use Google Earth mostly to scout rivers; hence this article will focus on that. I don’t do much planning using Google Earth for hiking trips, although I have definitely wasted a lot of time daydreaming about hiking trips on Google Earth.

Ben and I planned our 2015 Wood River trip over Facebook and neither one of us did in-depth research.

Our planning consisted of looking at Google Earth and putting a few potential waterfalls into Ben’s GPS. Ben told me later he assumed the terrain would be similar to the east side of the Canadian Rockies. Farther east the valleys tend to be broad (similar to the South Fork of the Flathead in Montana), and the trees are not too thick. I didn’t do much of my own research because I assumed Ben had it under control.

We knew there were a few waterfalls on the Wood River but that wasn’t a big worry. They were marked in Ben’s GPS and the whole stretch of waterfalls and large rapids was only a few miles long. We thought in the absolute worst case scenario we could bushwhack around everything and fully expected the lower part of the Wood River to be runnable.