You are here: Home / Articles / How To Ask Someone to Pull Your Car Out of the Snow

Sometimes the best skill is humbly asking for help. Here's a story about my experience getting unstuck when driving snowy backcountry roads. 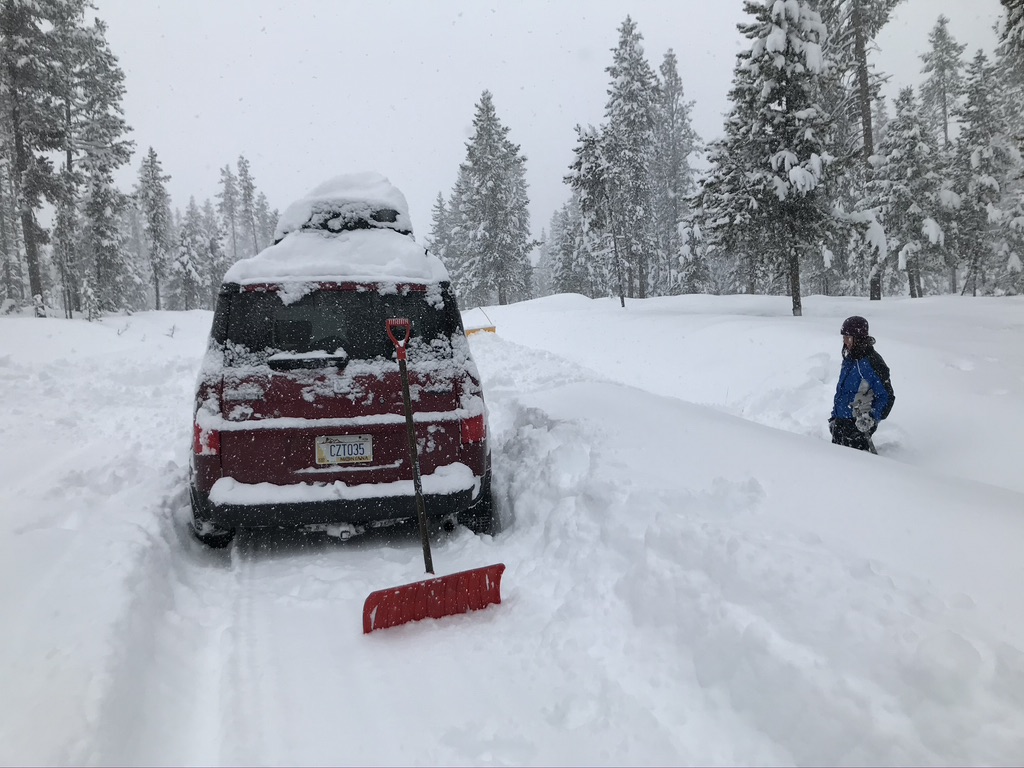 While there are plenty of winter backpacking skills to master—staking out a tent in the snow, managing body heat, and coping with extended hours of darkness and cold—one that is often overlooked is how to ask someone to pull your car out of the snow when you get stuck going to or from the trailhead.

Most people find themselves having to perform this task when their skill of not getting their car stuck in snow on the way to or from the trailhead isn’t as sharp as they’d remembered or environmental forces beyond their control overwhelm the ability of their vehicle. Fortunately, I’ve recently gained some experience with this skill and wanted to share with the Backpacking Light community what I learned. Although I’m far from an expert on this skill, or any other skills for that matter, I have some valuable observations worth sharing.

Exhaust Yourself and Your Options Before Seeking Help

Asking someone for help when you haven’t broken a sweat (and possibly the handle of your shovel) to extricate yourself from your predicament is simply poor form. If the tire chains are still in their original packaging, there aren’t mounds of snow on both sides of the car, and you and your passenger(s) are still on speaking terms, then you’ve likely given up too soon. Floor mats must be sacrificed to the Snow Gods for attempts at gaining traction (half-size Therm-a-Rest Z-Lites also work), futile efforts at moving metric tons of snow must be undertaken, and lengthy discussions about which gear to start in and who should push and who should drive need to have happened. These steps should be repeated at least once and preferably twice before seeking assistance from outside your party.

When traveling to a place where you might encounter a snow trap, it’s a wise idea to have some notion of where to get help when you need it. Noting the location of the closest plowed driveway to the trailhead is a reasonable start. Being aware of where cell phone reception begins and ends, in case you need to call a tow truck, is also important. Satellite messenger devices, like a Garmin InReach, can also allow you to coordinate efforts to free your vehicle from a frozen white death with people in your family or social network.

Employ Humor and Have No Expectations

Lacking cell phone reception or a satellite messenger, my girlfriend, Andrea, and I had to do things the old-fashioned way when we found ourselves stuck in February a mile from the paved and plowed road that would take us home.

We’d driven in on a gravel road that only had a handful of inches of well-packed snow and stayed at a US Forest Service rental cabin for a few days to cross-country ski and enjoy the simple life. During our blissful stay, over 16 inches (40.7 cm) of snow fell and made our exit a bit more exciting than anticipated. In our defense, the forecast called for a maximum accumulation of 7 inches (18 cm) which was well within my Honda Element’s capability to traverse—I had proper winter tires and I had chains as a backup. The USFS also told me that they usually plow the road to the cabin, even on weekends, which made me feel a bit more relaxed (sure, and Sasquatch cleans it between guests).

After a valiant effort to drive out that involved chains, shoveling, and strategic driving, we finally had to give up short of the pavement and its salvation. Luckily, there was a small cluster of houses with year-round residents at the junction of the paved and gravel roads, and 30 minutes of post-holing took us to the first house. Even more fortuitously, a truck was plowing the rear part of the nearest driveway. Putting on our friendliest and most humble faces, we approached to see what our options might be.

The driver of the truck, Russ, waved to us, parked, and then hopped out into the still-falling snow to see what we wanted. After the initial greetings and apologizing for bothering him, I got to the meat of the conversation:

“So, we were staying up at the Forest Service cabin on the East Fork this weekend. Drove up there on Friday. And, uh…we’re not driving now. Guessing you can put two and two together…”

After mentioning we might need to use a phone to call a tow truck, Russ said he’d be game to drive his truck back to our vehicle since we weren’t very far in. He would see if he could pull us out and get us in his tracks so we could drive out ourselves. We eagerly and earnestly took him up on his offer and, as far as getting stuck vehicles out of the snow, things couldn’t have gone smoother.

A short pull from his truck with my tow rope and we were able to get into his tracks which had packed the snow down just enough for the Element to get traction on. We drove the final mile out under our own power. The whole ordeal, from acknowledging we were totally stuck to being on the pavement probably took less than an hour—but we spent more than an hour on our initial attempts of driving out, getting stuck, digging out, driving some more, getting stuck, and admitting defeat.

Nevertheless, we made it out in time for a full afternoon of downhill skiing on the 24 inches (61 cm) of powder they’d received in the last 24 hours. While I’d have rather started my morning with fresh tracks on my skis than in my car on a snowed-in forest road, I suppose all is well that ends well.

Express Gratitude and Return the Favor

After making it back to the pavement, we stopped to thank Russ sincerely for his assistance. He was in the middle of plowing out the houses in the neighborhood and we’d taken his time away from that job with our interruption. We asked for his address and dropped a thank-you note in the mail with a gift card for a local ranching supply store. It seemed the least we could do since he saved us from what could’ve been a long and expensive ordeal.

I’ve helped a handful of people out, both on trails and on the roads, during my decade of backpacking and it is always a good idea to pay it forward”. If it is safe to help, and you have the resources, then there’s really no excuse not to.

Overall, I was reasonably prepared for the situation I found myself in. I had the proper equipment (winter tires, shovels, chains, a vehicle suitable for the predicted conditions, tow rope, knowledge of plowing conditions, and a detailed forecast) but the snowstorm was more severe than what was predicted. These things happen. Ours was a success because of neighborliness and not getting stuck in too inconvenient a location. And it was a good lesson to maybe just park where the guaranteed plowing stops if snow is in the forecast and just ski into the cabin rather than driving.

After all, a 2000 lb. vehicle isn’t really part of a lightweight backpacking system and can sometimes create more problems than it solves.