You are here: Home / Articles / Land of Fur and Fire: the Yellowstone Caldera Loop

Land of Fur and Fire: the Yellowstone Caldera Loop

With Covid-19 necessitating an unsupported hike, we undertook an ambitious loop through the geysers and lakes of the Yellowstone Caldera. 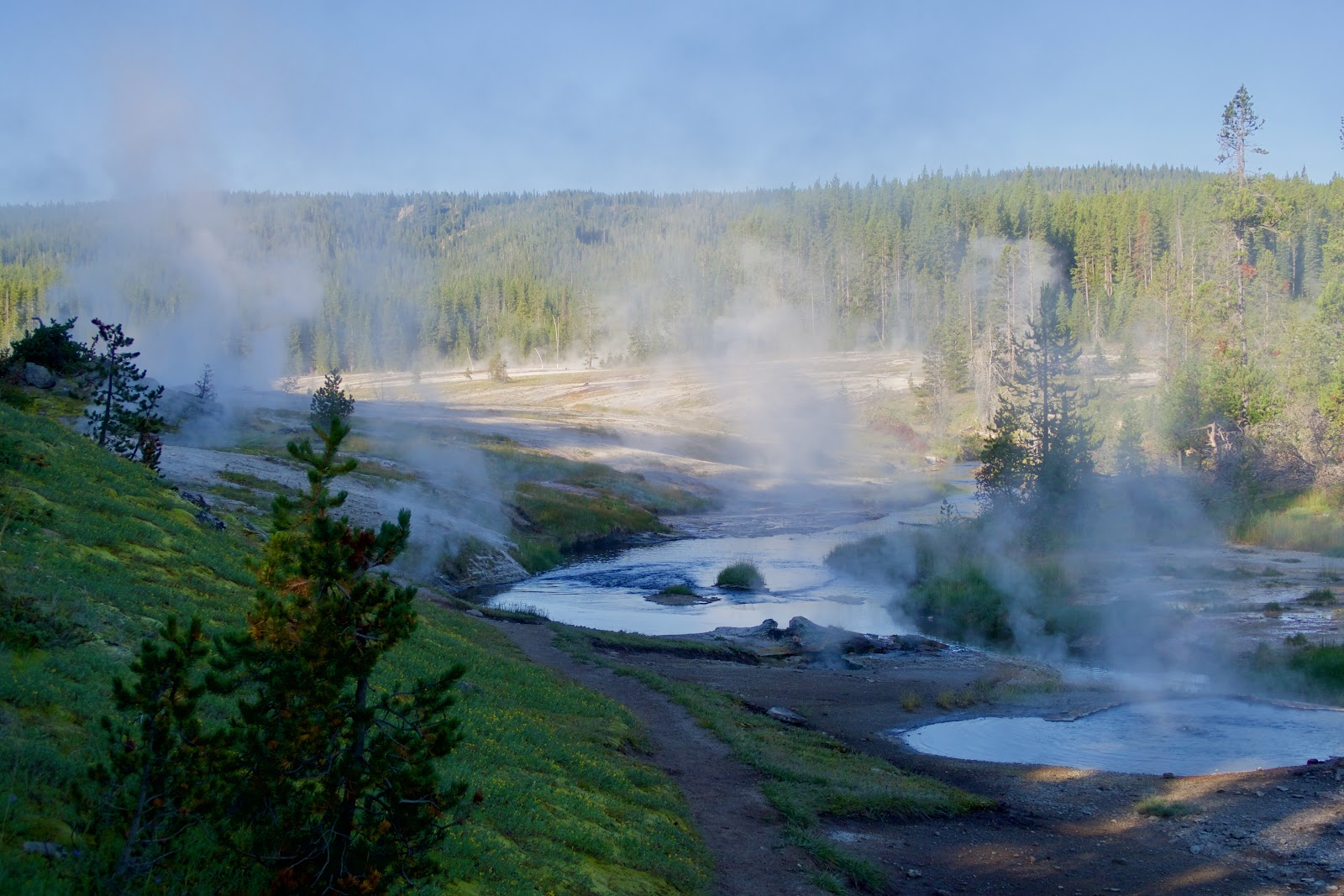 We’ve all had our hiking plans disrupted by the pandemic, long-distance hikers especially. Hitching into small towns to resupply, eat, and sleep just isn’t a great idea. Organizations like the PCTA are advocating no-support hikes only.

A big loop-route within a day’s drive seemed like the best option for a longer hike. The best place to make a big loop is through a large wilderness area, and no area in the lower 48 is bigger and wilder than Yellowstone. As I pored over maps, a themed route emerged: a hike of the Yellowstone Caldera. This 150-mile (242 km) loop would take me through the heart of the park, visiting deep wilderness, remote geyser basins, bountiful wildlife habitat, enormous lakes, and big rivers. It even featured a possible on-trail resupply option.

A hiking partner is a good idea in Yellowstone. Although bear attacks are rare, most of them happen to individual hikers. My friend Dan gave an enthusiastic yes when I pitched the idea. So we got a permit (all online/by phone now), went over the gear lists and menus, and headed out in late July of 2020. Our remaining logistical challenge was to find someone to hold our resupply box at Old Faithful, as the Post Office there was not accepting parcels. After an hour of wandering around the Old Faithful complex, we found a hiker working at an establishment who agreed to hold our box on the condition that we do not name them nor the establishment. Fair enough. We spent the night at the Canyon car campground and dreamed of grizzlies, geysers, and fat cutthroats.

Blue skies, a blue lake, and blue lupines greeted us at the trailhead. We stashed beers in the shade for our return, snapped a selfie, and started walking through an old burn festooned with flowers.

The burn gave way to a live forest amply supplied with stream crossings. Openings grew scarcer and the forest denser as we progressed south. Rounding out of the forest into a dense thicket, we called out, “Hello bears! We come in peace!” and jumped back as the brush exploded ten yards in front of us. A wave of energy parted the heavy foliage and shot thirty yards up the hill. We saw no fur or fang but there is only one animal that moves with that much power and speed.

Bear spray in hand, we explained (as calmly as we could) that we meant no harm, were just passing through, and would now be on our way. We took the shuffling noises in the bushes above as assent and proceeded past a deadfall freshly stripped of its bark.

Of course, we looked back. We saw that we were being followed by a good size long-tailed weasel. We admired it, walked on, looked back again. It was still there, skulking behind. We called out to it.

“Why are you following us?”

Eventually, it ceased its surveillance and turned off the trail to complete its weasel errands, whatever those may be. 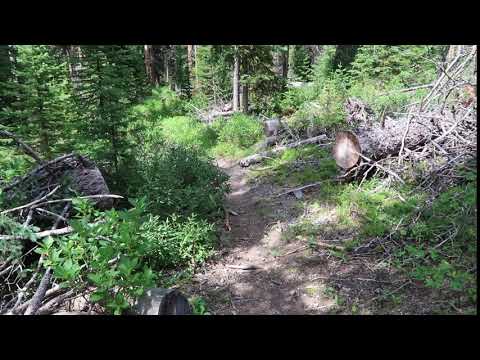 We reached our NPS-approved campsite by mid-afternoon and found it equipped as advertised, with a cross-pole between trees for hanging food (we brought Ursacks). Sadly, this campground lacked an open-air pit toilet.

It was hot, and there was plenty of time for a swim, so I dove right in and added Yellowstone Lake to my lake-bagging life list. At 7,500 feet, it was cold, although not nearly so cold as the alpine lakes in the Sierra and Rockies. Dan, being of a more judicious nature, elected to wade out gradually. That approach rarely produces an immersive experience. This time was no exception as his progress stalled out at thigh-level depth.

We retired to the beach to dry off and lounge about until sunset. There was an abundance of flies and an absence of rising trout. But these were the only impediments to our complete satisfaction with the day’s hike.

We continued our walk toward the upper Yellowstone. The trail wove in and out of the forest, rewarding us with spectacular views of the lake, the Thorofare country, and the mountains beyond.

Several northbound hikers passed. The last group we encountered was camped near the lower ford of the river. Like the other hikers, they had crossed at the Thorofare ford several miles up and found it waist-deep. They doubted the lower ford was passable.

We were also advised that several huge grizzlies were roaming the area. No surprise there, as half a mile of willow thickets stood between us and the river. We advanced cautiously, seeing no bears, but plenty of wolf tracks.

Arriving at the river, we took our time scouting the ford, and found a route no more than waist-deep. Facing upstream, we side-stepped across, me in front to break the current, Dan behind holding on to my pack, ready to brace me. Though the smooth-flowing

current was deceptively strong, we were across in a few minutes with no slips or scares. It was a challenge but—with proper preparation and technique—not a danger.

We decided to lunch by the river. I broke out my Tenkara rod and fished the deep pool above the ford. My Kebari fly excited no interest. Given the thickety nature of the land along the banks, I was not comfortable moving far from the ford to fish. The chance of running into a grumpy bear was just too great. The Thorofare is the heartland of grizzly country, a place far from any roads, as wild a spot as exists in the lower 48. I needed to respect that, not chase up and down the banks looking for good fishing spots.

We headed west along the marshy southern margins of the lake. The abundance of bear sign caused Dan to remark, “There is bear shit every fifty yards on this trail.”

“Yeah, that is really inconsiderate. You’d think they could step off to the side, but no.”

“Bears are the worst.”

“We should file a complaint with the rangers.”

We were in a truly wild place, one of the few intact temperate-zone ecosystems left in the US. People are scarce here and far outnumbered by bears and wolves. We had ventured well beyond any semblance of a man-made, or even man-friendly environment. It’s not that the environment was hostile. It was just indifferent. We were unremarkable specks in this place, not masters of creation. That was how it should be. It was what we had come for.

Clouds built through the afternoon and loosed a few showers as we approached our campsite near the southwest corner of Yellowstone Lake. Although we had covered only 18 miles (29 km), it felt like much more—fording big rivers and navigating bogs is hard work. We made an early bed, grateful for the chance to lay down and rest, grateful to have come through a country as wild and beautiful as this one.

Day three was a short ten-mile (16 km) hike to the geyser basin on the west side of Heart Lake. After a leisurely breakfast of home-dehydrated eggs, ham, and veggies, we departed camp at the shockingly late hour of 9 AM.

We crossed the Continental Divide, an unremarkable low ridge, and made our way under the bright sun through a succession of burns and meadows. The meadows were in peak flower, sporting paintbrush, fireweed, monkshood, lupine, yarrows, gentian, geranium, and of course numerous unnameable varieties of yellow clusters. The vegetation was thigh-high, and the trail presented as a faint trampling, easy to lose.

Heart Lake soon appeared and we walked its black pebble beaches along the north shore. Mt. Sheridan rose behind, adding a bit of scenic drama to the gentle landscape.

We camped, we swam (well, one of us swam), and we made our way to the geyser basin, following plumes of vapor through the open forest. Approaching from below, there is no telling what we would find—vents, springs, pools, geysers? There was no trail, no signs. What awaited us was for us to discover. 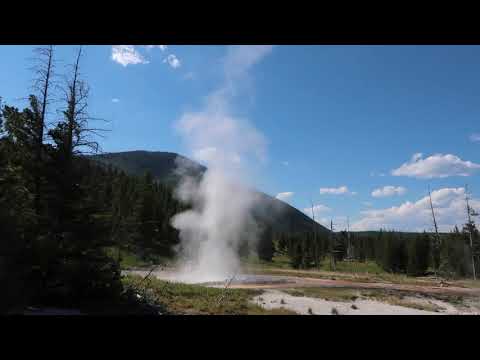 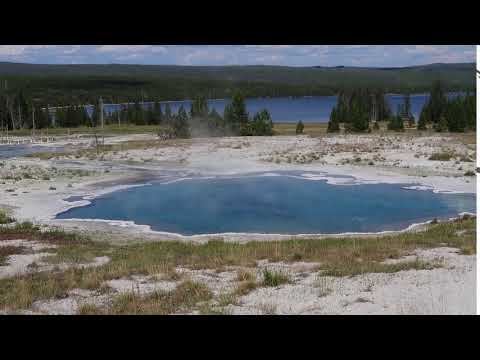 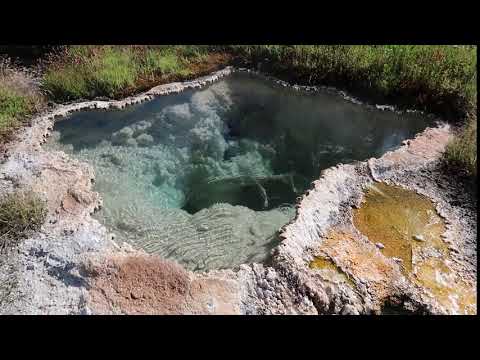 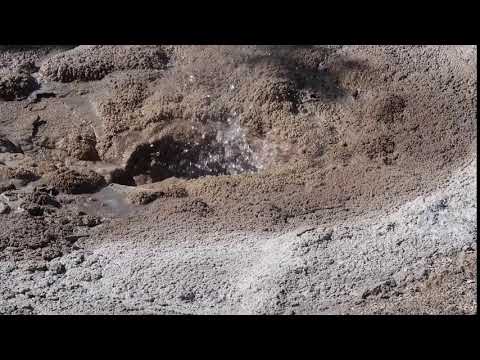 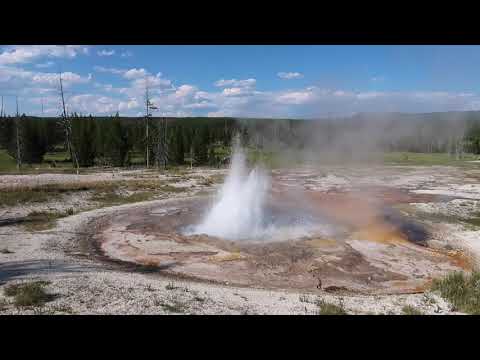 We spent some time—one hour? two?—wandering from feature to feature, looking for vapor clouds, listening for gurgles and rumbles. Each find was a source of wonder and delight, worthy of attentive inspection. The glaring afternoon sun wore on us as dinner time approached. We walked back to our camp, intending to return at dusk.

We ate dinner lounging comfortably on the beach. A pair of loons fished. Mayflies and caddis swarmed. Trout rose, but they were few and far off. Shadows stole across the lake and mounted the hills behind us. The geyser basin seemed very distant then.

Darkness fell, the moon rose, and wolves sang us to sleep.

Started backpacking in 1967 and (apart from my 3 years living in Indiana) have never stopped. I've been section-hiking the Colorado Trail the last 4 years, and gotten to Marshall Pass so far. I'm not fanatic about weight, possibly because I like to load up my Newfoundland dog and use him as a pack animal. The important thing is to go, and to have a good time.