Dispatches from the Beartooth Plateau (Day 5): Crossing the Crest

Live dispatches via satellite from an expedition in Montana's Absaroka-Beartooth Wilderness: Day 5 - Crossing the Crest

Today we (attempt) to cross the Absaroka Crest to the Beartooth Plateau, where easier terrain and world class alpine lake fishing awaits.

The clear skies at dawn this morning make me hopeful for a high altitude traverse that is absent of the drama that comes with wind, cold, and rain.

Between the Beartooth Highway and the Stillwater River, there aren’t many places to cross the Absaroka-Beartooth Crest if you aren’t a backpacker with some mountaineering skills.

The two easiest spots, perhaps, are High Pass, which we would attempt today, and Sky Top Pass, which will be the key to our exit next week.

High Pass is visited occasionally by day hikers coming from the south via Donelson or Two Bits Lake. The terrain is mostly Class 1 with only a little bit of Class 2 talus here and there.

Far fewer backpackers traverse High Pass. The route north and east, the route we were ascending, poses difficult travel. So you have to want it.

We left camp “mid-morning” with rain jackets on as we walked into a weak storm system that would release intermittent bits of sleet and snow on us for the next few hours.

Our route took us through creekside willows and bogs before delivering us at the foot of a nasty glacial moraine strewn with sharp, car-sized talus.

We opted for the steeper terrain of grass, granite slabs, and snow flanking the moraine until we reached the beautiful Sky Pilot Lake. Here, we rested, ate, and hid behind our backpacks out of the bone-chilling wind while taking in the view of one of the Beartooth’s most dramatic, pyramidal peaks immediately above: the SE summit of Sky Pilot Mountain.

We skirted the south end of the lake, climbing loose scree and talus above steep snow that plunged sharply into Sky Pilot Lake’s icy blue waters. I can feel the fatigue in my legs and back, after several thousand feet of climbing over the past few days. I’m looking forward to easier days and more rest when we get to the Plateau, so I can recover a bit before attempting the difficult traverse of Sky Top Pass next week.

By mid-afternoon, we reached the first of High Pass’s passes. High Pass is a two-pass pass, with a lake in between (High Pass Lake). The gentle pass was covered in a flat talus and snow field, which was a welcome reprieve from the steep climbing required to get here.

We descended the pass and reached Maryott Lake by late afternoon.

We are camped on little tundra benches overlooking the lake, and surrounded by the jumbled topography of the Beartooth Plateau. It’s cold here (we are at 10,500 feet or so), with a bit of a breeze (just enough to numb hands and cause a chill if you’re not hiding behind a large rock), but beautiful. It feels only a little hostile, but very remote.

I tried to fish tonight into the headwind and managed to land a 13 or 14 inch cutthroat before retreating to our sheltered kitchen to warm up. 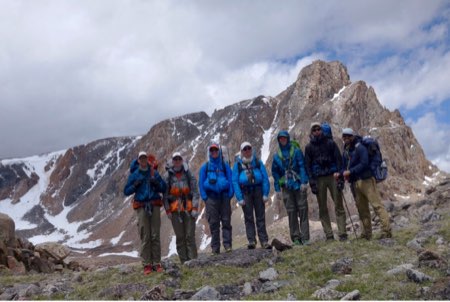 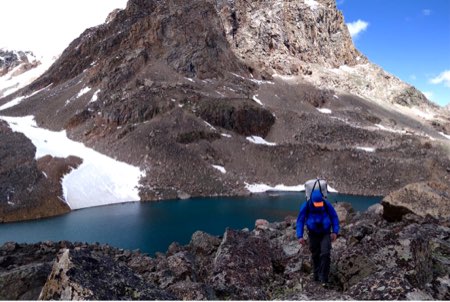 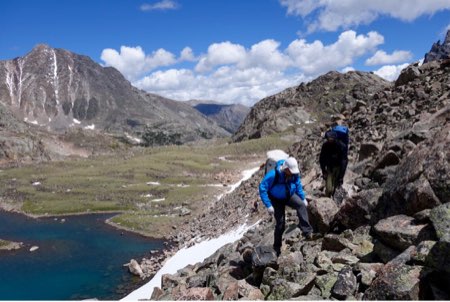 Home › Forums › Dispatches from the Beartooth Plateau: Crossing the Crest