You are here: Home / News / Essays and Commentary / Learning Curve: Backpacking is the Great Equalizer

I have always been an average athlete. In fact, I could probably be considered a below-average athlete. One of my clearest childhood memories is from sixth grade. I was standing alone at recess when I heard one of the Cool Sports Kids tell another Cool Sports Kid: “We would have won the soccer game in gym class, but the teacher made us have Maggie on our team.”

Some memories just stand out because they perfectly encapsulate the entire middle school experience, right?

Well, Cool Sports Kid, joke’s on you! 15 years later, that soccer loser would go on to complete a very average thru-hike of the Appalachian Trail.

Long-distance backpacking is one of the only tiers of the athletic realm where being average means nothing, because there is no competition. As the miles accumulate into the hundreds, and then thousands, most hikers (hopefully) stop comparing themselves to the people around them. They settle in with a group that is moving around their pace, and are too enraptured by the journey to care if they’re hiking 15 miles per day compared to someone else’s 25 miles per day. If you’re a thru-hiker still consumed by those numbers, congratulations, but you’re probably not the target audience of this column. 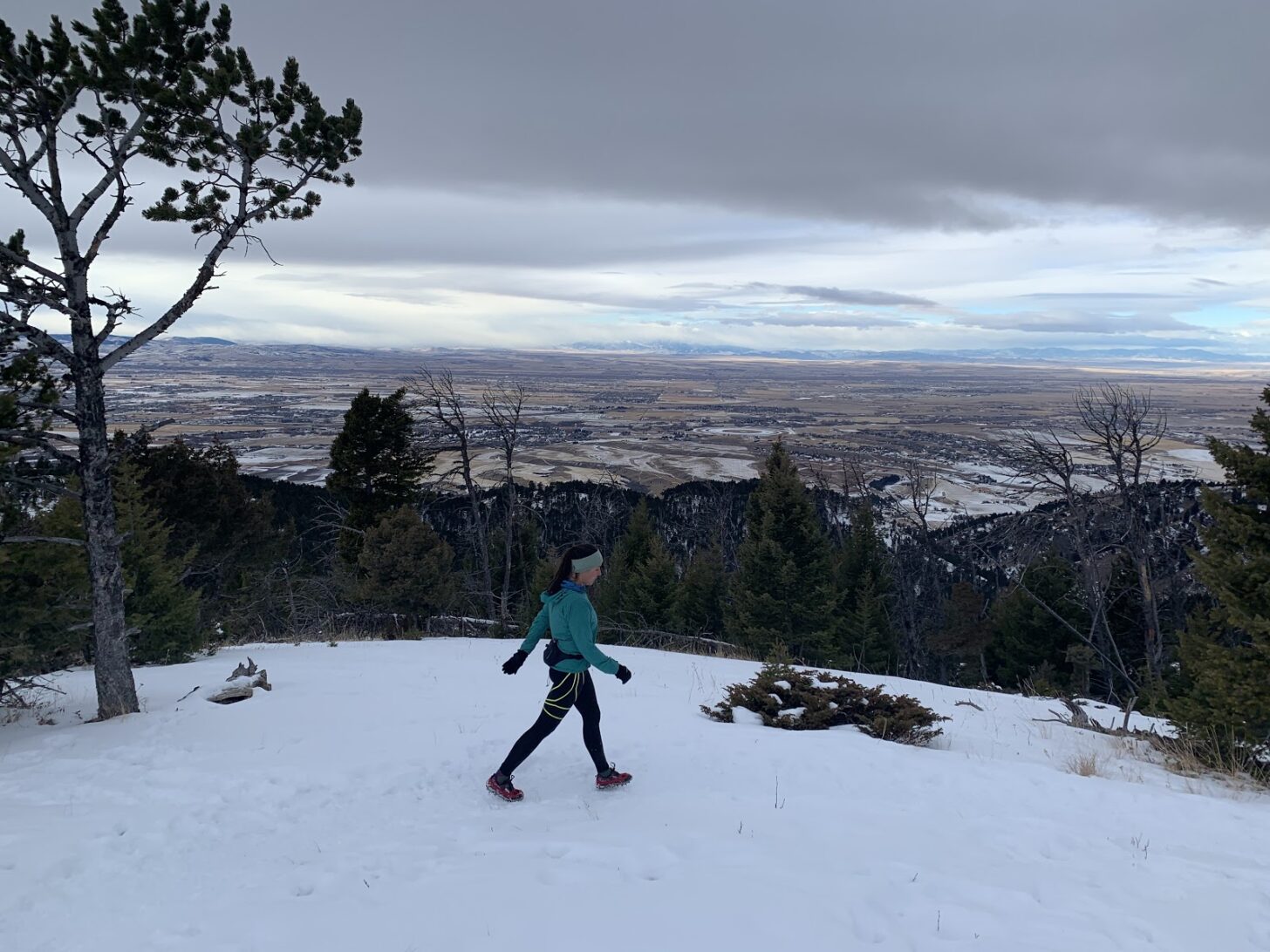 Averagely hiking around Bozeman, Montana a few weeks ago.

I’ve spent the last eight years living in a mountain town that attracts super-athletes in every category. The person in front of you at the grocery store, delivering your pizza, or parked next to you at the trailhead: any one of them could be a truly exceptional mountain athlete. If you’re hiking a peak, someone will run past you. If you’re pushing your bike up a seemingly impassable section of trail, another mountain biker is coming up behind you, clipped into their pedals on their third lap of the morning. It’s not competitive per se, but the comparison can be impossible to ignore. It’s like that sixth-grade gym class: if I am with a group of friends running, biking, or peak bagging, I am probably last. I might be an average athlete, but with my group of friends, my partner, and my chosen hometown, I fall far below average.

This is where backpacking provides freedom and relief. Backpacking isn’t competitive. You hike at your own pace, and the primary goal is to finish what you started. I constantly compared myself to other people when I first began backpacking. I’d look ahead in the guidebook and worry about being slower on climbs, having to stop before everyone else, needing more breaks. I worried they’d hear me breathing hard, or notice that I couldn’t hold a conversation because I was too busy rationing my oxygen. This created a needless cycle of stress and anxiety, worrying about the pace of the group and whether I was going to slow people down. 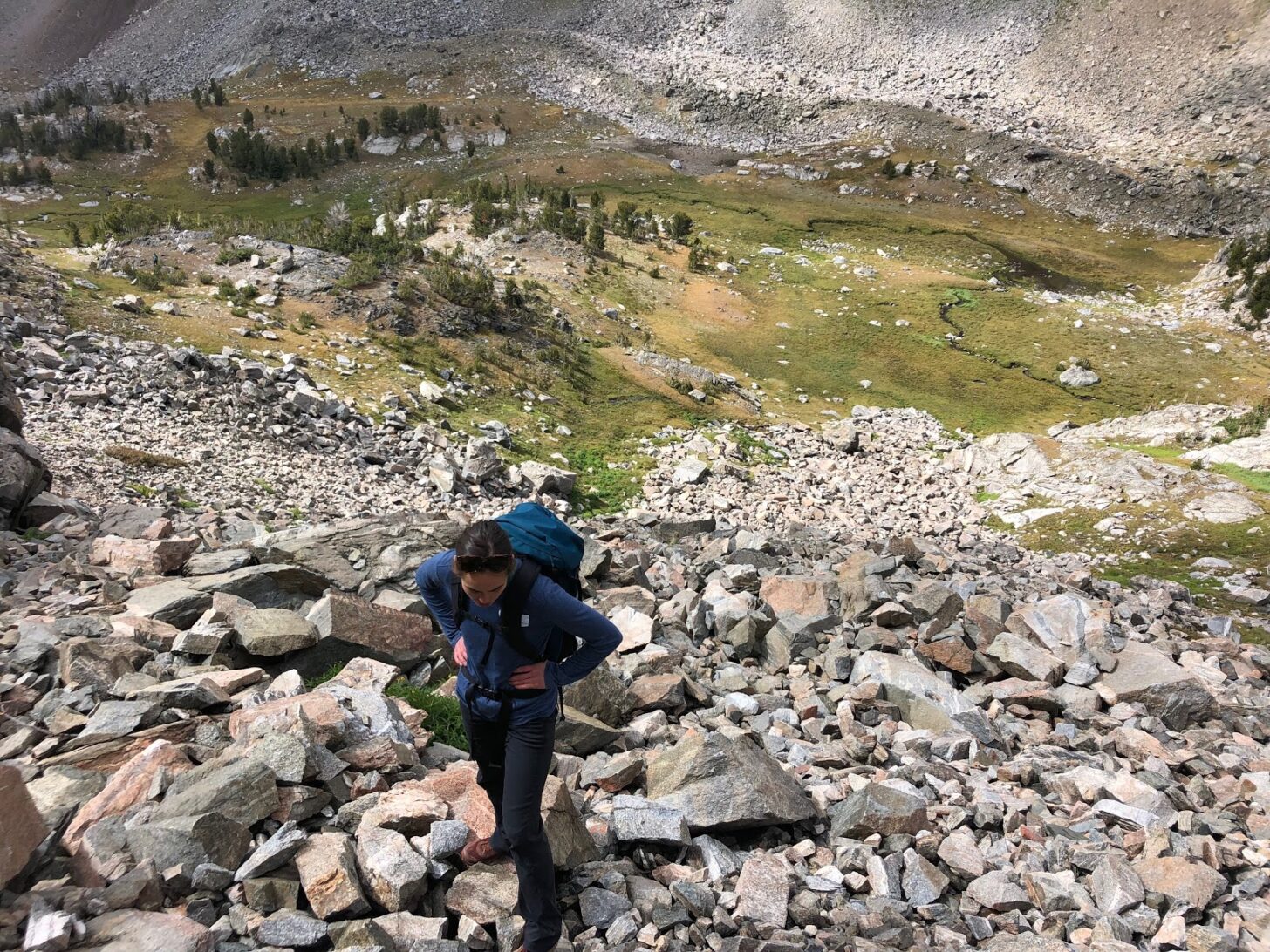 Off-trail scrambling with no timeline and only minor levels of terrain-induced stress.

But of course, none of it mattered. I was slower than some people and faster than others—we all hiked at our own paces, and no one cared. If someone was having a good day, they were faster. If they were feeling worn out, they were slower and stopped earlier. Sometimes I hiked all day with people and sometimes I preferred to be on my own. Eventually it stopped bothering me when someone would pull ahead on long climbs. I’d either see them at camp, or I wouldn’t. Slowly, that fear of inadequacy I’d experienced in every other athletic endeavor faded.

That’s how long-distance backpacking goes. Hikers of all athletic abilities are doing the same thing, just at different paces. If the backpacking trip takes eight days instead of six, the biggest consideration is taking a few extra days’ worth of food, or planning for another resupply. 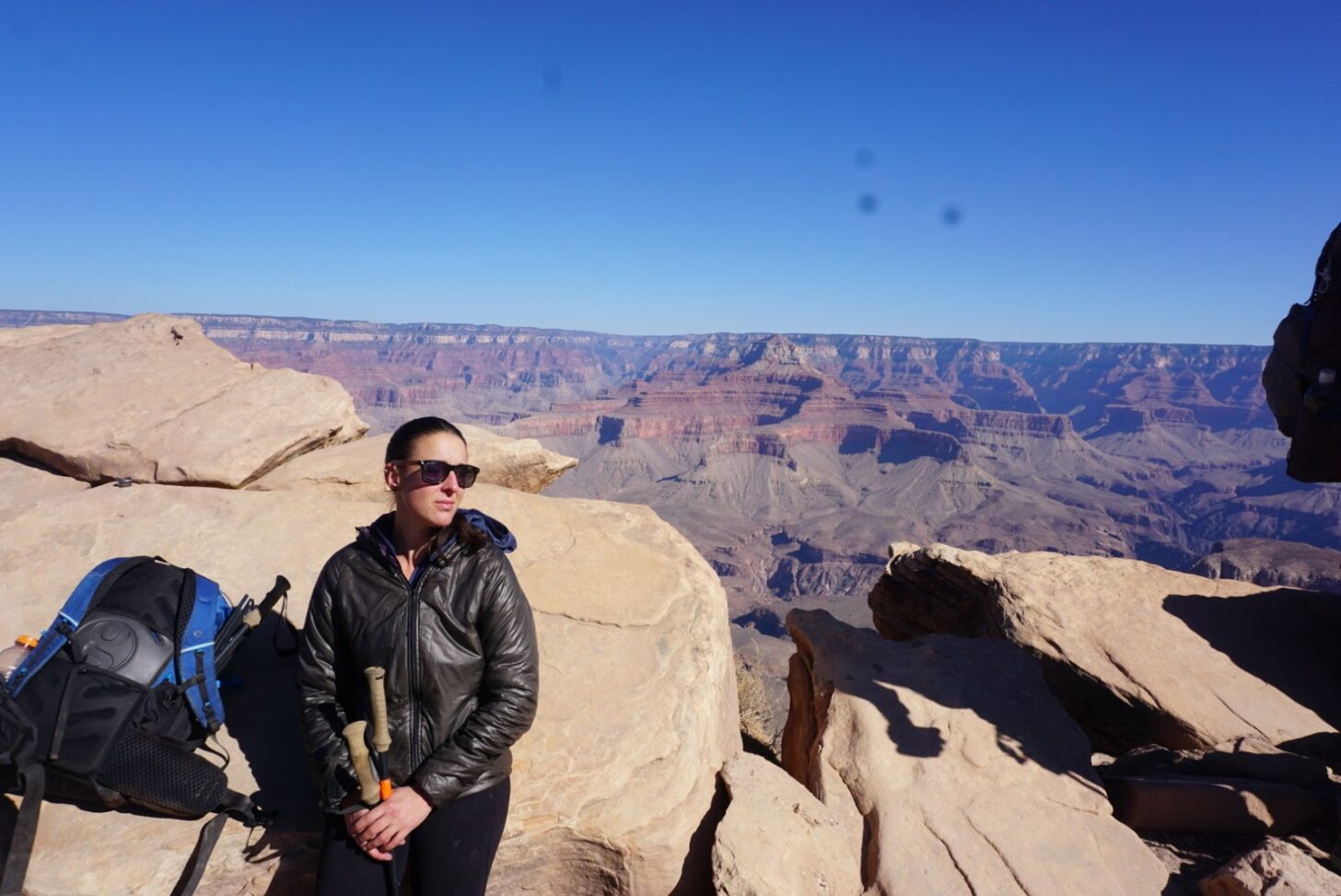 Backpacking in the Grand Canyon this fall. This group had varying athletic capabilities and it! Was! Still! Fun!

The only real definition of success with backpacking is reaching the end of your route or trail, and even that isn’t set in stone. Sick of your section hike? Finish early. Run out of time and money? Turn your thru-hike into a LASH. There are no winners; thus, there are no losers. The person who took seven months to hike the Appalachian Trail still thru-hiked the Appalachian Trail, just like the person who did it in 100 days.

As an average athlete, this loose definition of success is one of my favorite aspects of backpacking. An athletic activity that requires nothing more than forward motion over an extended period of time is a great equalizer in the world of sports.

Being an average athlete in a high-achieving mountain town is no longer shameful—I actually see it as a benefit. There’s less pressure as an average athlete—I’ve learned not to expect excellence, and to appreciate the activity at face value. When I set out from a trailhead, I’m not trying to set a record, impress anyone, or even look particularly good while I’m out there. I’m just there to hike, and it makes me enjoy it more. I’m accustomed to things feeling hard for me: I get winded easily, I need a lot of sleep each night, and my knees hurt on the steep downhills. If I think I’ll need more time, I plan for it without feeling bad about myself. 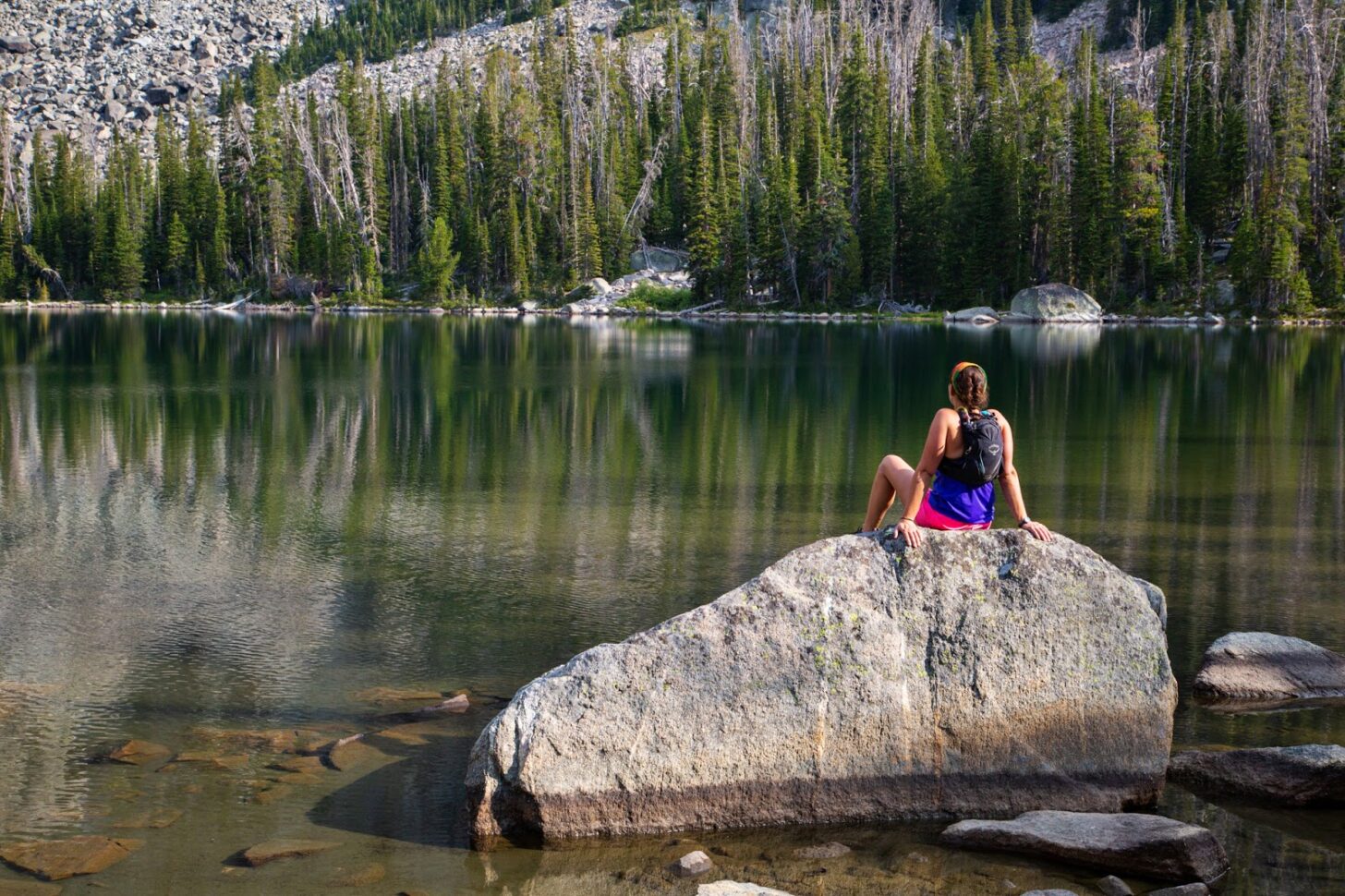 Enjoying a hard-earned rest at an alpine lake. I don’t know how long it took to get here, and it doesn’t matter.

The “average is a blessing” lesson was not an easy pill to swallow. I’ve always wanted to be naturally good at things. This fruitless desire made me competitive, prone to ignoring risks in other sports like climbing, kayaking, and mountain biking. What I lacked in athleticism I tried to make up for in heady risks. But that pressure doesn’t exist with backpacking. I just get to walk. I don’t have to walk fast, and I don’t have to walk farther than I want to.

I just have to move forward.

My average-ness was solidified for me on the middle school playground: I can’t be good at all sports, and maybe I can’t be excellent at any of them. But being average made me seek out equal playing fields, which meant dedicating more time to scrambling around in the backcountry, exploring remote alpine lakes, planning long-distance hikes, and taking off from trailheads with just my backpack, a few days’ worth of food, and a vague timeline.

The release from performance pressure is something I’ve never experienced in another sport. The idea of being average fades away with the accumulating miles. Out there, I’m just a backpacker, and I always finish what I start.